This is known by so many different names. Westerners will probably refer this as jerky but I think a lot of people just calls it dried meat. Dried Meat is a popular (an expensive) snack in Malaysia and Singapore. In chinese, it is known as bakkwa or rougan in Mandarin.

Dried Meat is sold by the weight, typically in kg or in catty (a chinese measurement of weight). It costs over $60 for 1 kg.

Dried Meat is a very common gift, especially during festivals like chinese new year. Needless to say, when I was in Malaysia I bought a few of these and also received a few from friends. It is always packaged in some form of red packaging — red being an auspicious colour to the chinese.

Wing Heong and Kiew Brothers are the two most popular brands in Malaysia. 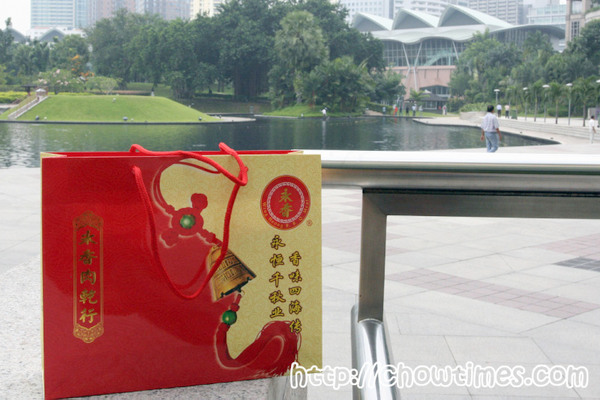 Dried meat can be made of several kinds of meat. The most popular meat is pork (below). Chicken and prawns were also popular.