Rob and I had at least three hours to kill before heading to the airport. Rather than hanging around the office, we decided that we should just go to downtown Atlanta to do some sightseeing and lunch. It was a toss up between CNN, the Georgia Aquarium or the World of Coca-Cola. For me, I was sure where I would want to go … the World of Coca-Cola.

Atlanta is the headquarters of The Coca-Cola Company. Did you know that Coca-Cola and Coke is the most recognizable brand in the world. Go to anywhere in the world and you will find that people will know what a Coke is.

The World of Coca-Cola is located in downtown Atlanta and just next to the Atlanta Underground. This place exhibits the history of Coca-Cola. I understand that this place will be moved to a new location sometime in 2007 next to the Georgia Aquarium. The entrance sports a huge rotating Coke logo.

There was not many people when we got there. Entrance is $9 — expensive. I had expected that they at best charge a token entrance fee.

The displays were displayed in a chronological order starting from the year when Coca-Cola first started operating in 1886. The Coca-Cola name is made up from the two basic ingredients: a stimulant of Coca Leaves and caffeine from Kola Nuts.

In those days, Coca-Cola was served from Soda Fountain like those below. 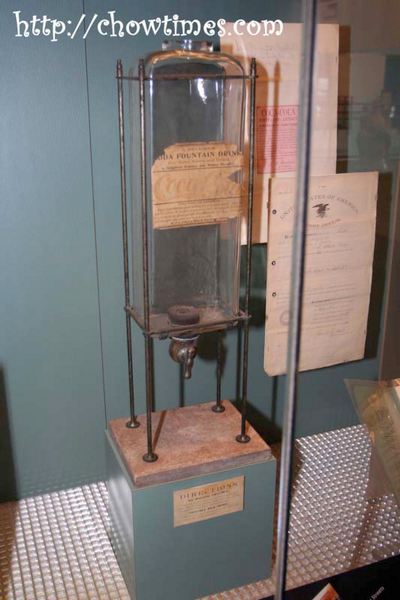 Coca-Cola bottles underwent many generation of changes over the years …

In 1915, the “contour bottle” also known as the “hobble skirt” was created. Story has it this design is supposed to have been based on kola nut or coca leaf but the researcher mistakenly came up with a sketch of cocoa pod. That error stuck and total we have this very distinctive bottle recognizable anywhere in the world.

The mold below is the actual prototype and production bottle. Over years, the bottle became slimmer but the fundamental shape remained.

Here is the estimated number of soft drinks served by Coca-Cola the past 125 years … what is that? 8 billion? 8 trillion? 8 quadrillion? 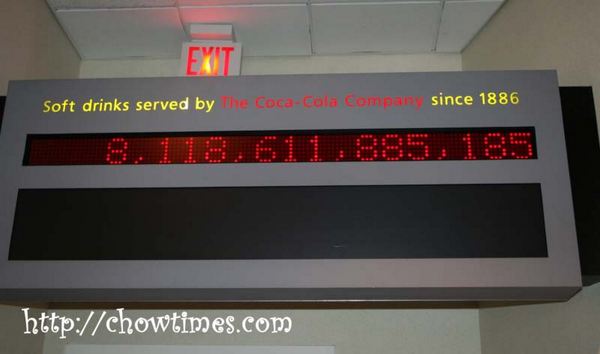 Coca-cola is served everywhere in the world … and also in outer space! This is the Coke dispenser designed for NASA’s space missions.

I tried every single of the 35 in display. That is a lot of drinks, trust me. They have even located washrooms nearby in case any one want to take a quick pee.

The Tastes of the World had weirder tastes — some of them tastes horrible.

I wish I had more time here and take in all the exhibits more closely. Well, at least I have been here and see for myself what the World of Coca-Cola is like..j