I am glad to learn that at least one reader missed our regular daily blog. It was a hell of a week for me at work. I could barely do anything else after work, let alone blog. Suanne had some blog entries left but we decided to not release those just yet so that we can keep this series of Dine Out Vancouver intact … it is my job to blog on this series. Am now back in action …

Lets see … we started off with a west coast style restaurant, and then we went to a grill, then a seafood restaurant followed by a french restaurant. This next one is perhaps the best Italian restaurant in Vancouver. It is located in the upscale Robson Street. Robson St is famous for the fashion shops and dining. It’s our version of Rodeo Drive and Fifth Avenue.

CinCin (pronounced as chin-chin) had won many awards especially in 2005 and 2006 in the Italian and wine categories. Some of the award mentioned were:

It is located on the second floor just above the fcuk Connection.

A stone stair case winds up from the hustle and bustle from the street level to the first floor dining room and bar. The restaurant is decorated throughout in earth tone. Lighting was dim.

I got to learn to order another type of cocktail. I have always had the same thing — Bloody Caesar. What is your favourite pre-meal drink? Give me some suggestion?

Anyway, the Caesar as always is spicy but this one is so much more heavier with vodka. Six bucks, small glass but perfecto!

Starters were the normal bread but with some thingy that is made of Olives, Roasted Garlic, Herbs. We think this is called Tapenade. How is this pronounced? I said that it’s ta-pa-nah-dey but Suanne insists that it’s ta-pa-ned. Anyway, this tapenade thingy is, well, sourish and salty at the same time. It doesn’t taste bad but it’s not good to me. I preferred good old butter and so I asked for some.

For appetizers, I ordered what is called the Pork Terrine Country Style with Citrus Mostarda and Sherry with toast points. It tastes like spam to me. 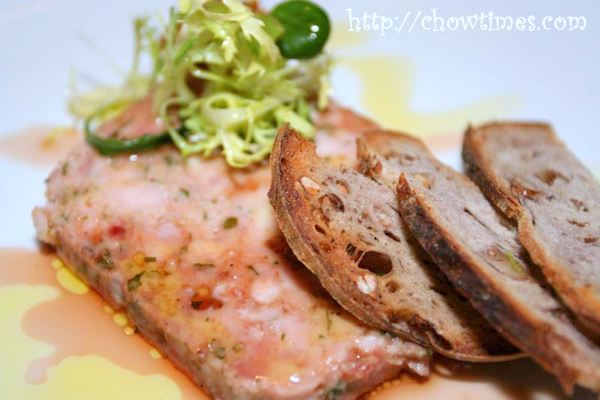 This is how I ate this. I staked the pork terrine with some mostarda on the toast points. I like the crunchy toast. Is this how Italians eat this? 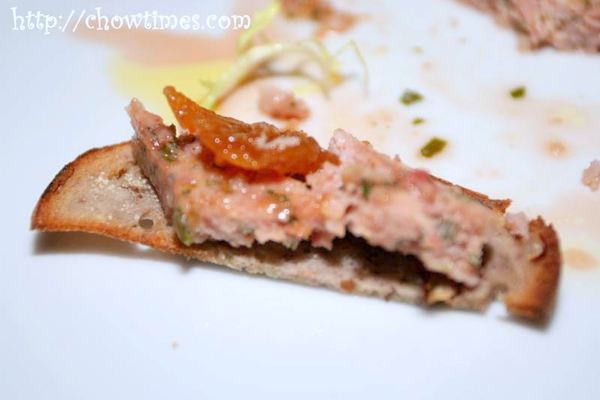 Suanne had what is called the “Red and Gold Beet Salad – Aged Ricotta, Arugula and Balsamic Dressing”. She is not particularly a fan of balsamic dressings but this one tastes pretty good. The beet was slightly sweet but the Arugula is bitter though. 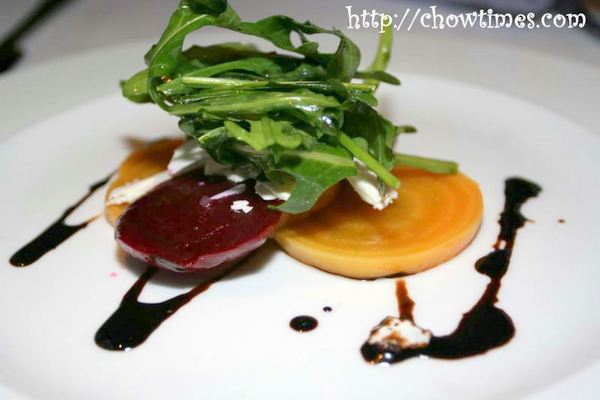 For my entree, I had the “Rotisserie Fired Pork Loin – Potato Pave, Spiced Cabbage, Clove and Nutmeg Jus”. I was quite disappointed … there is only two sliced of pork on top of a huge slab of potato pave. The spiced cabbage was sourish … I left most of that untouched. 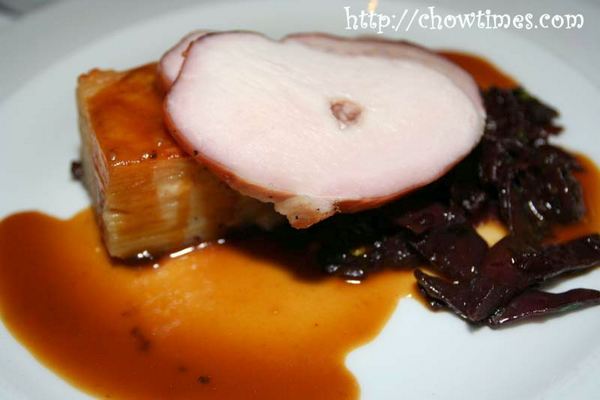 Suanne’s entree looked prettier. She had the “Braised Portabella Mushroom – Creamy Polenta, Root Vegetables, Almond Gremoulata”. Two big pieces of mushrooms with a beefy taste. Suanne being the gourmand between the two of us told me that portabella mushrooms are used by vegeterians as a beef substitiute. I learn something new again. I had a few bites too … I like it better than my pork loin.

Dessert for me was the “Chocolate and Meringue Cake – Banana Sorbet, Lemon Sauce”. This one is super, the dark chocolate is so rich. The Banana sorbet had a very intense banana taste — taste more like bananas that had been left under the sun for 10 days! Suanne thinks that they used banana extracts which caused it to taste so unnatural.

Suanne’s dessert was the “Carmelized Pear Tart – Pistachio ice cream, Caramel Sauce”. There are sliced of pear neatly arranged on top of some of the best pastry we had.

You know what I think? I always had this perception that Italian food are generally sourish. This meal sort of confirms this perception. Being grown up with Asian food, I sort of prefer a lot more spices and dishes that are saltier. Would we try Italian again? Yeah, of course, but we’ll stick to pastas and pizzas.

Total bill including tips and taxes comes up to $93. You know what impresses us a lot? Their washrooms must have been one of the best around. They supply real hand towels neatly rolled on a tray — not paper towels!