I was so intrigued. When I first heard that the national food of England is Chicken Tikka Masala, I thought that someone was pulling my legs. In a few days I was in London, some people (mainly Indian taxi drivers) told me the same thing too. Here is what I learned the past few days — let me know if I get this correct.

Masala is an Indian term that refers to a mixture of many ground spices. What does the word Masala mean? Spices? And Chicken Tikka Masala is really invented in Great Britain. So, I figure since I am in London I must simply try the national dish. 🙂

I had blogged on the Sipson Tandoori the last time I was in London here. I vivid remembered making an unkind remark about the “pretty dumb” paper bags the delivery came with. I had the tendency sometimes to be brash, I admit. He he he … the paper bags I guess will always be there but at least this time, the curry did not leak all over the place.

Got a question for you, Rukya. How many pieces does people normally order the papadam? When I ordered ONE piece, the person who took my order sounded so surprised. I mean, the papadam is such a large piece that one is more than enough for me. Guess what, when they delivered to me, they game me four pieces. Hey, I have no complain. I must say that Sipson’s papadam is simply one of the best I had tried … they are so crispy and flavourful … and they tastes just as good the next morning. 50p per piece but they charge me only for 1 piece — nice!

The curry gravy was awesome — very rich and if I recall correctly, it was not spicy hot. I enjoyed this a lot. This one costs about 8 GBP. 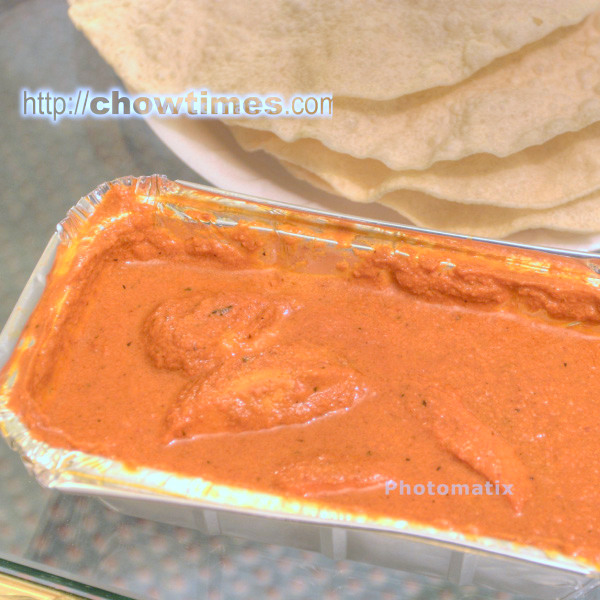 I also ordered the Bhindi Bhajee … fresh okra (a.k.a. ladies fingers). I like ladies fingers and there are lots of this here. One thing about okras … the seeds do not breakdown in your body right? 🙂 3 GBP.

I can’t remember what this is … but if I make a guess, I think this is the Lemon Rice which is described as “Basmati rice cooked in ghee flavoured with fresh lemon“. 3 GBP.

I enjoyed this meal in the hotel room. There were lots of food. I do come away having the impression that London has some of the best Indian cuisine restaurants in the world.