Did you know that the city of Versailles was virtually the unofficial capital of France in the past? It is in his royal city that the seat of government was located although the official capital is Paris and the official palace was the Louvre. Versailles is extremely rich in history. It is located about 10 miles west of Paris and can easily be reached via RER trains.

Versailles is best known for the Chateau de Versailles (the Versailles Palace). I spent a good part of a day at Versailles. I have heard a lot of this place and its grandeur but had never knew much about it. When I reached the entrance, I was practically awe-stricken. I knew it was grand but I have never imagined how huge it was until I saw it with my eyes. 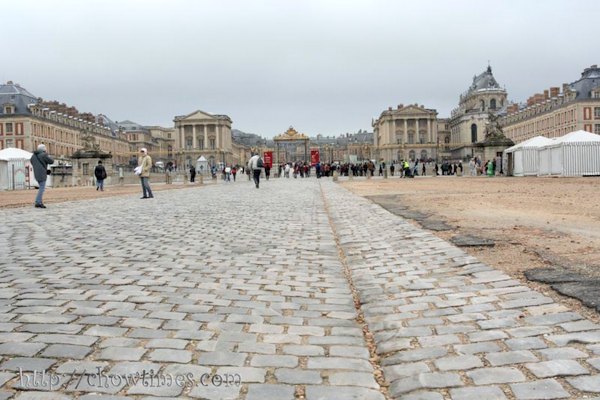 I signed up for a guided tour and knew it was well worth every Euro. It indeed was. The guide assigned to us was not just any guide but a curator of the Versailles Palace. Man, she sure knew her stuff and amazed us with the answers that we threw at her. Because there were so many people around, we were given listening devices so that we can hear everything she was saying even though we are not within earshot. People who signs up for the tours gets to a different route and different places that is not opened to the general public. 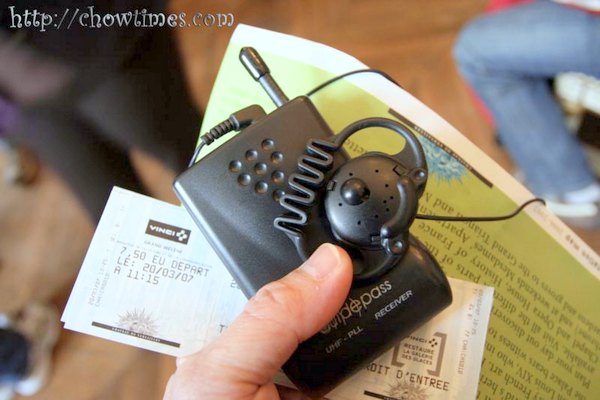 For three generations, from Louis XIV to Louis XVI had ruled France from this grand palace. As in the Louvre the opulence from that era shows. There were precious paintings still remaining in the Versailles but most of them had been sold by the government after the French Revolution. The Versailles is trying to restore this palace to it original but it will take a lot of money and a long time, if at all possible. 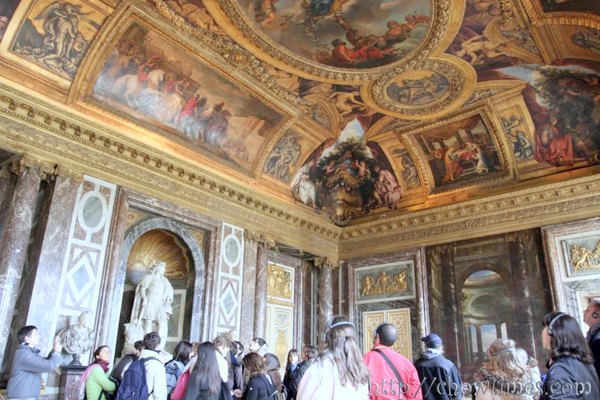 The Versailles Palace is currently undergoing extensive renovations and refurbishments. The balcony in the centre is where an angry mob forced Louis XVI (and Marie Antionette) to faced them. They were taken forcibly from the Versailles to Paris where within the next few years, they were guillotined in Paris for treason. I was in that room that looks out the small courtyard. The guide explained it so vividly I can almost imagine the morning the crowd broke through the gates to confront the King. 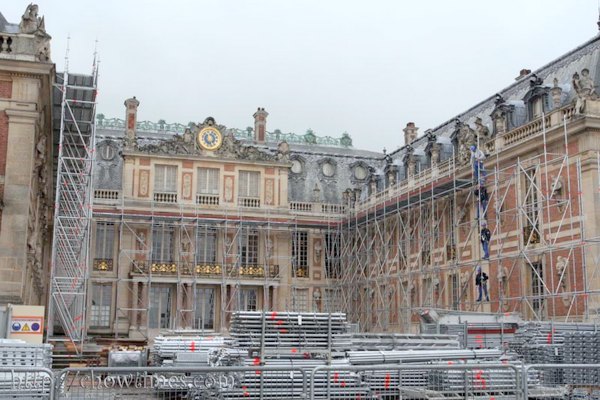 King Louis XV ordered an opera to be built in the palace. While it is not huge but this being a private theatre, it is extravagant and sports some of the finest decorations of its time. This theatre was not used often because it was expensive to run it. It requires about 3000 candles alone to light up the place and the type of candles used costs a week’s wages … EACH! I can imagine how difficult it must have been just to light 3000 candles. 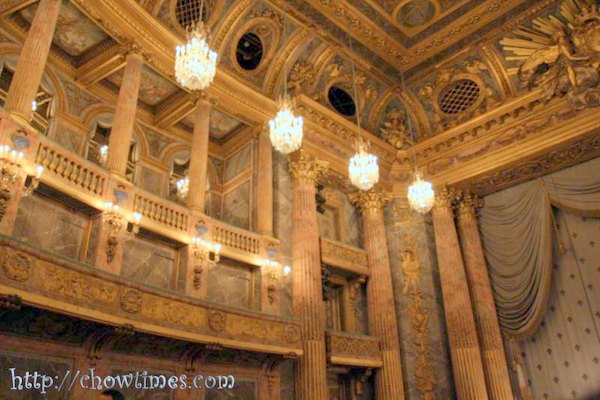 The king also built his own private chapel. 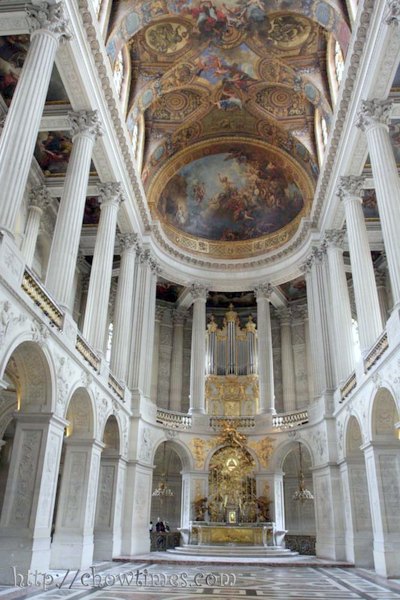 The Hall of Mirrors is most well known as the place where the lopsided Versailles Treaty was forced upon Germany after World War I. At the time the Hall of Mirrors were built, mirrors were very expensive and luxurious. The king had an entire hall of mirrors built … imagine that … 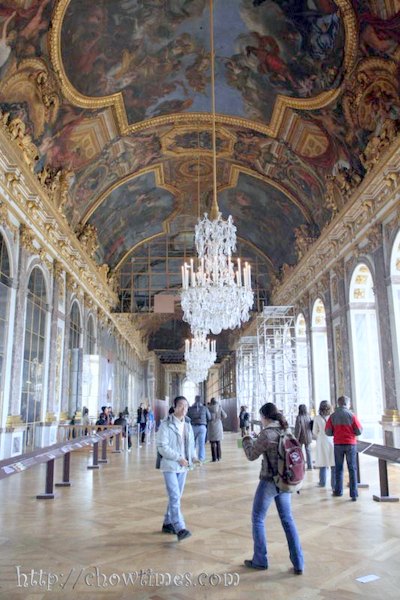 The refurbishments are going along well and does make a big difference. The side on the left were completed. Compare that to the untouched facade on the right …

If I think the building were large, I was somewhat awed by the size of the gardens. 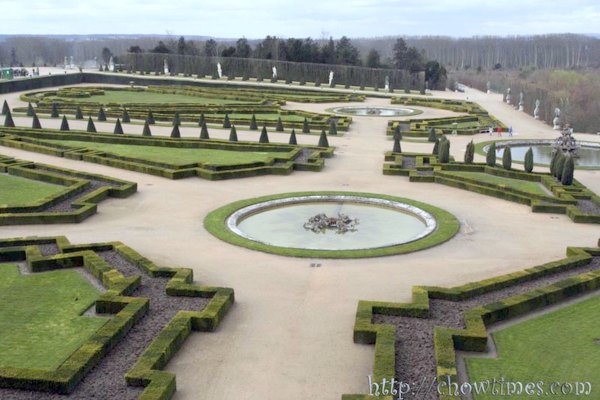 A walk from the Palace to the end of the canal and back takes 1 hour! Going outwards is easy as it slopes down. The kicker is when I tried to walk back. 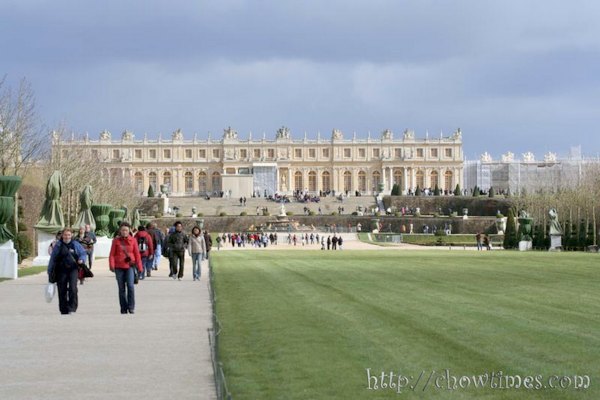 It was darn tiring already walking all over the palace but it’s a waste not walking thru the gardens. Frankly, not many people bothered to walk beyond the first stage of the gardens. I can understand why not.

I just can’t begin to describe how huge Versailles is … check this map here. 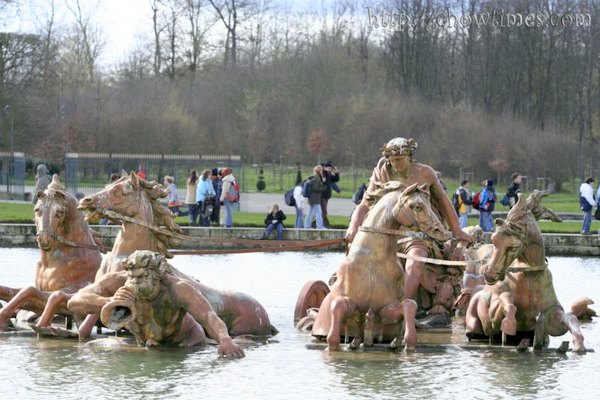 I really enjoyed this entire trip and came away so amazed how rich and influential France was. If not for the rise of England’s naval power, perhaps today this blog is in French. 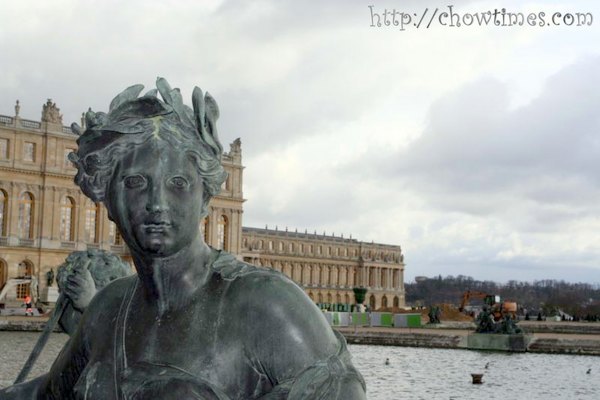 So much had been said how expensive and luxurious the Versailles Palace is. It was estimated once that it takes one quarter of the entire income of France to maintain this palace. This is a must visit place if you are in Paris. I spent about 6-7 hours in all, including travelling time.

From a Non-Japanese Saying: “私は日本人です”