This gotta be the highlight of the vacation for the boys. They wanted to snuck in a theme park on the vacation. I am all for it as I love roller coasters and such myself. However, Suanne vehemently protested that she will absolutely NOT go on any rides. He he he … she had a torrid time when we were in Disneyland/California Adventure and Knotts Berry Farm when we pestered her to have a go on the rides. Why even the kiddie rides freaks her out.

There are only two choices we can find for Theme Park — it is either Six Flags and Great America. Six Flags is out of the way in terms of the general direction we are heading and I think Six Flags have wilder rides. Great America seems to be a more family oriented.

One tip about going to the park, get your tickets before you get to the park. We got ours at the hotel we were staying in. I think it was about $10 less or so per ticket.

The one and only reason we headed to Santa Clara before going to San Francisco is because of the theme park stop.

In terms of size, Great America is no where near Disneyland although one would need at least 1 day to cover this park. The park is very compact and very walkable with lots of seats and shades around. Getting from one ride to another is pretty quick and helps us cover as much rides as we wanted.

We were there on a Saturday and expected a large crowd on a summer weekend. However, it was not as crowded as I feared. The lines were not too bad as we have seen worse in Disneyland. A long wait on the popular rides is like 15-30 minutes only.

You know, the few days before we arrived, there was a fatality in this park in the water section of the park. Apparently a toddler drowned in the newly opened wave pool. It was all over the news in Santa Clara. We did not spend any time at the water section because we did not have the time. 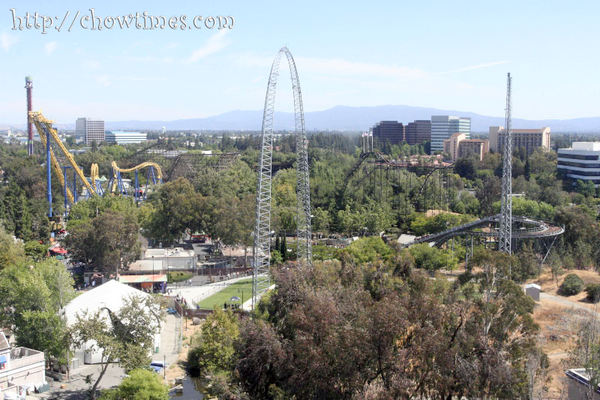 The star attraction of this park is the Top Gun ride. It is a long inverted roller coaster with all imaginable turns and twists you can ever imagine. It’s based on the experience of riding in a fighter plane. We headed to this ride first.

Arkensen went on this ride twice. Here is the video of him on the ride.

It was only after this ride we started to plan our other rides. 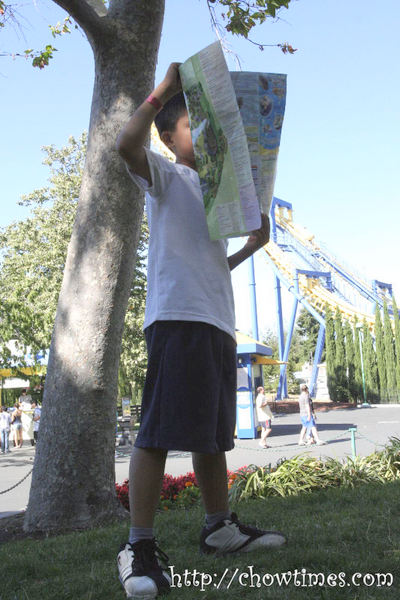 We split up. Arkensen and I went for the rest of the big roller coasters while Nanzaro and Suanne went for rides which have lower height restrictions. Nanzaro is a roller coaster buff himself. He was so disappointed when he found that he was just 1 inch too short for the big rides.

This one is our favourite too. It looked like a simple ride.

I love the name of this ride … The Invertigo. It is another inverted roller coaster but the riders ride face-to-face. It travels both forward and backwards and gives a fun feeling of falling on top of the rider you are facing. 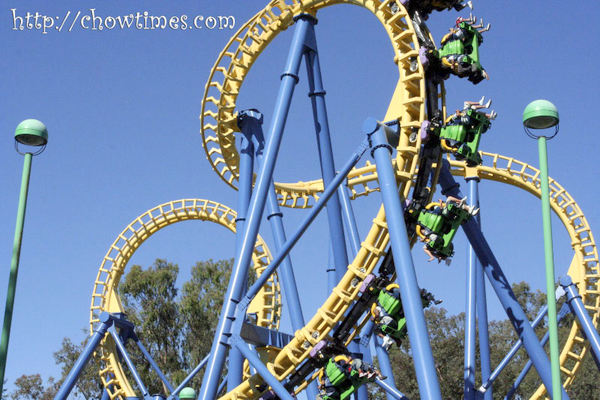 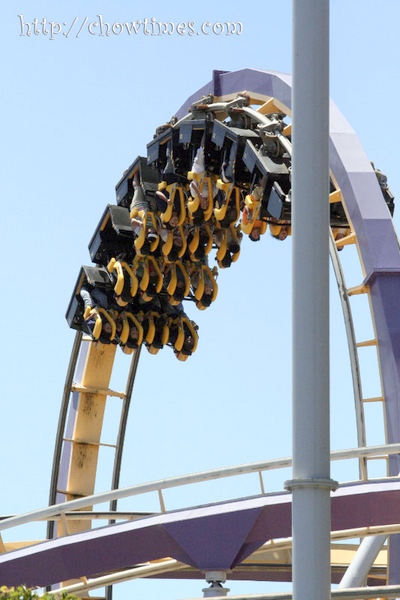 Arkensen chicken out of the Drop Zone. I am not sure why he had no problems with coasters but dare not try these drop rides. I went alone.

Foremost in my mind on this ride is the news of an accident on a similar ride somewhere in the US. A girl got her legs cut off by a snapped cable just a few weeks prior. There are two types of such rides, one that uses air to lift the chairs while the older ones uses cable to hoist the chairs … this one uses cables. I kept my legs close to the seat as much as possible.

Simple ride … go up and the wait for the drop. Just ONE drop. The view from up there is beautiful though … until the drop came.

We met up about an hour later and went on the Star Tower. Nice ride. The gondola spins up and down give a great view of the park and the surrounding area. Good time to rest our tired feet too. 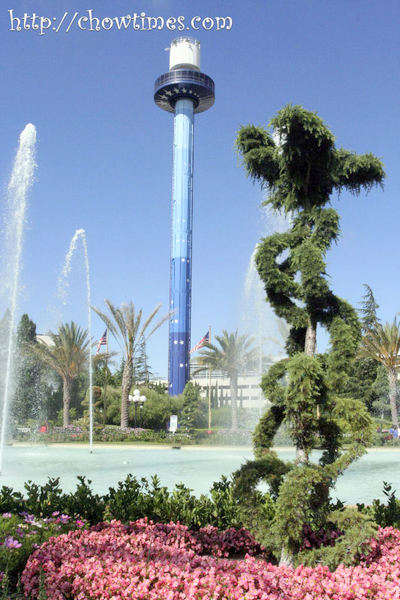 This is a wet ride. The Whitewater Falls just brings you up and drops you down with a huge splash … both on yourself and the unknowing people who just happen to stand around the nice bridge. It was great fun to see people getting drenched.

Talking about being drenched … the park sure know how to keep people cool. 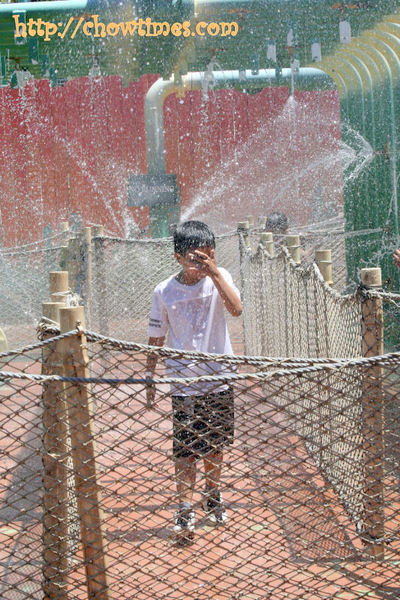 The “Survivor The Ride” is Nanzaro’s favourite. It looked like a simple ride but is tons of fun. He went several times.

The Rip Roaring Rapids is another favourite of ours. It’s not as wild as it we thought it would be.

By 2PM, I am totally knocked out. I had enough of roller coasters. There is something about the older rides … they are so jarring. I gave up on rides after that. Guess I am not getting any younger!

… all I can see is spinning trees …

Oh food … food in Great America is atrociously expensive and horrible. I expect to pay a “premium” for food in theme parks but at least give us decent food. The “Super Jumbo Hot Dog” costs 7 bucks and what do we get? This!! 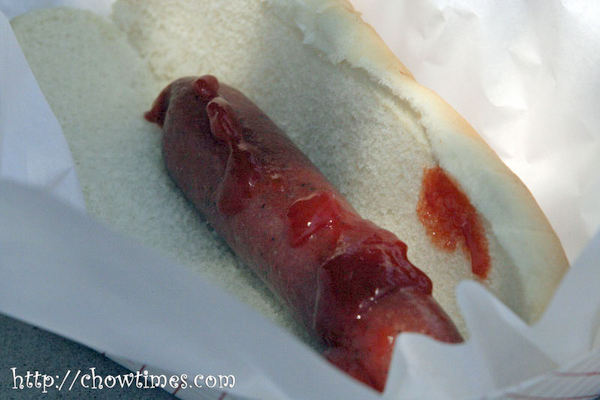 There were also great shows around the park. We love the magic show. It was hilarious. 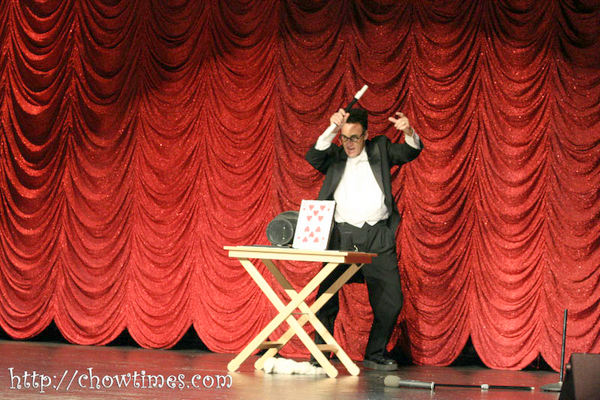 The swinging 60s show was fun too. The boys were complaining before we went in that it’s so … retro … a.k.a. so … mum and dad. But guess what, they love the show. We all enjoyed it … a lot. He he he … I was hoping the boys know now that mum and dad’s era also had our fun times … and stop saying that mum and dad is boring, OK?

We had a GREAT TIME in Great America. I think we managed to cover about 60% of all rides but we certainly did cover all the important ones.