Parking in San Francisco is not only expensive but it is notoriously difficult to find. Before I started on this vacation, I asked friends about parking and almost everyone advised me to just use their transit system. One told me that he once went to a dinner in downtown, circled around the place for one hour, couldn’t find a lot and then went home. And then there was when I booked for a hotel in San Francisco and found out that they charge $20 extra for parking! So, I decided that we’ll use transit as much as we can.

We stayed in a hotel near SFO (not LAX! Thanks Chubbypanda) because for some reason the hotels the week we were in San Francisco were expensive. We could get good places the week before or the week after for around $100. However, the cheapest we could get for the week we wanted was almost $200 for a crummy bed and breakfast. Some big event must be happening in town. So we decided to stay in a really nice place a bit further out and travel into the city everyday via transit. 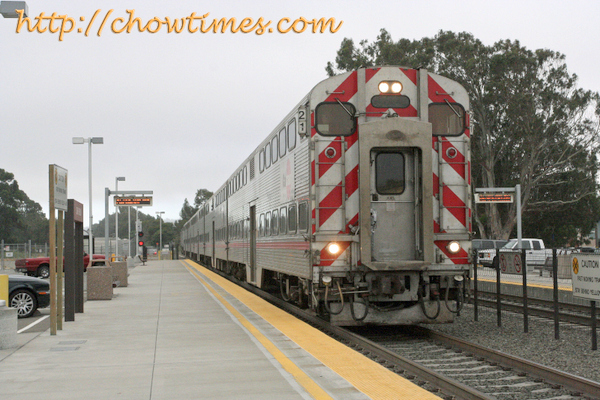 We tried BART first and found it expensive. So, we decided to try a cheaper alternative — Caltrain. The only problem is that they run on a very fixed schedule — something like only 1 or 2 runs per hour. That means that we had to time our journey well, especially on the late return trip during which time they only run once an hour. 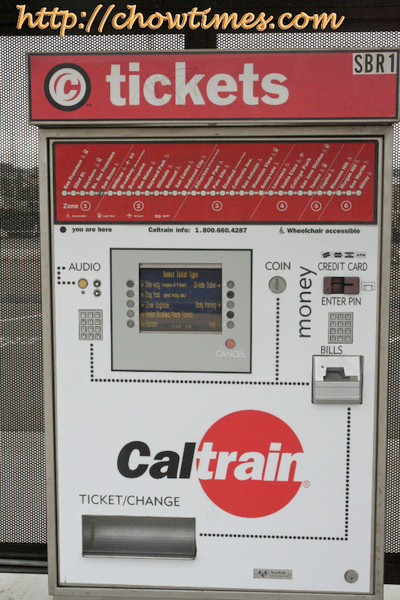 The Caltrain cars are huge and is double decker. And man, they do travel really fast … you are better off staying way clear of the tracks. 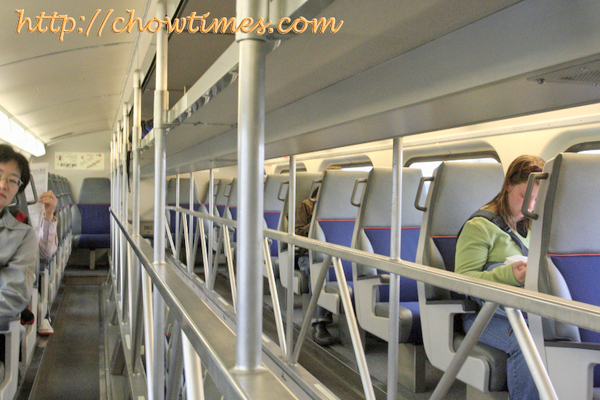 When we got into the city, the first thing we did is to get the tickets for the mandatory Cable Car ride. We got our tickets at the ticket booth at Market and Powell. 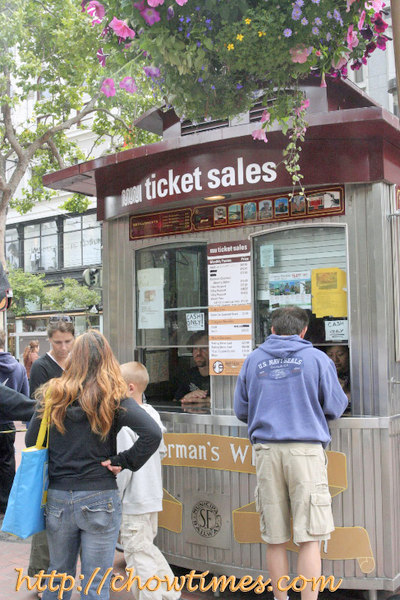 We also gotten ourselves a Street and Transit Map. All the other free maps we had were not detailed enough. Moreover, it had all the transit routes described. If there is one map you really need, it’s this one. 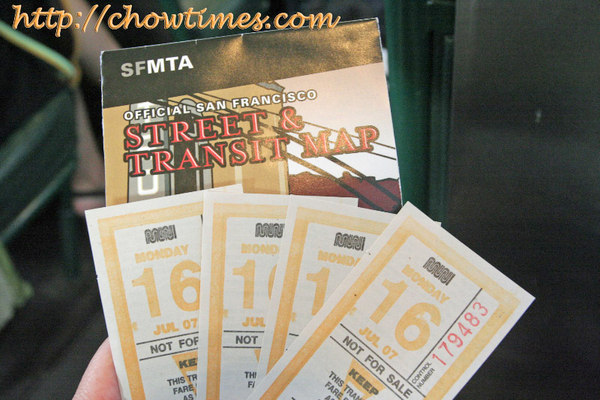 Travelling on the Cable Car is pretty expensive at $5 each for one way. Of all the routes, we were told that the best route to experience the Cable Car is the Powell-Hyde route. This route gives the best view of the bay and had steep climbs. 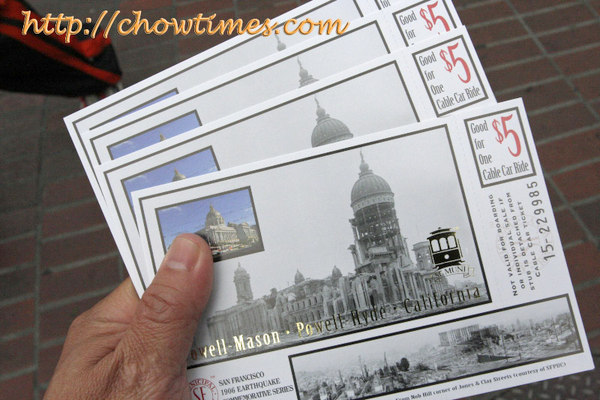 About the only place you could get on easily is at the terminal. This is at Market and Hyde. Although they make stops along the way, it’s often difficult to get on because the cars were already full.

Anyway. we had our battle plan figured out. Both the Powell-Hyde and Powell-Mason routes shares the same turn around terminal. We wanted to get on the Powell-Hyde car only … so you need to read the sign on the cars to make sure which route to take. Also, we wanted to have the external seats and have the chance to hang off the sides!! That’s more fun right? I simply hate being squished with zero view on the insides. 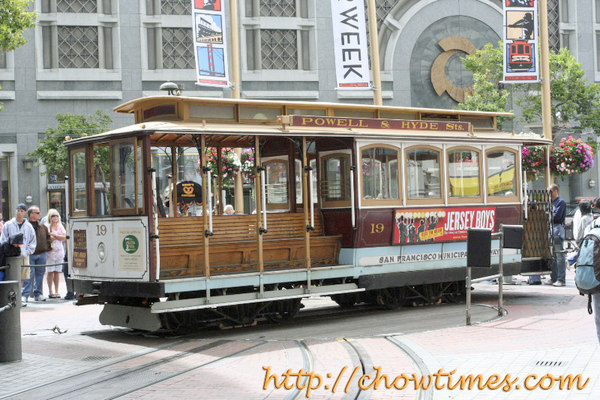 We took turns sitting and standing. For those of us new to this, it is pretty scary because cars come very close by and the drivers had to shout to warn us about incoming cars. 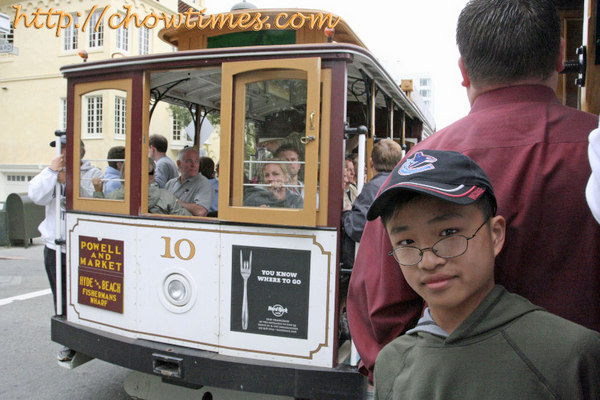 We also took the Muni Metro to get around. This is part of the Muni transit system. It costs about $1.50 for travel within 90 minutes. Tickets may be used on other forms of transportation on the Muni too, eg buses and trolleys. 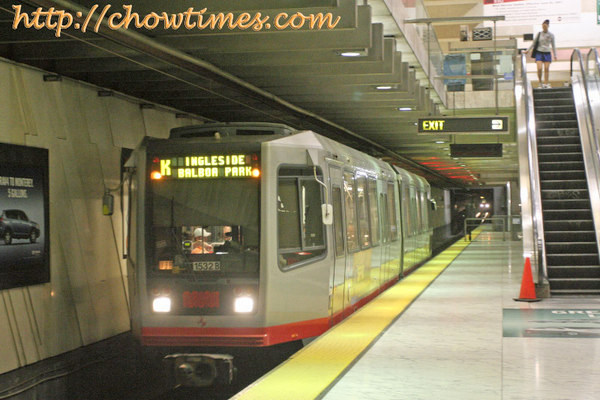 The Muni Metro is like a mix of a traditional streetcar and a LRT. You know, the thing I always had problem with on such systems is how to get the doors opened. Does the door opened automatically, do I press something, do I step forward? This one had a bar by the side, way too low for my hands to touch … so I guess people just bump it with their thighs to open the door. Pretty handy for people who had their hands full. 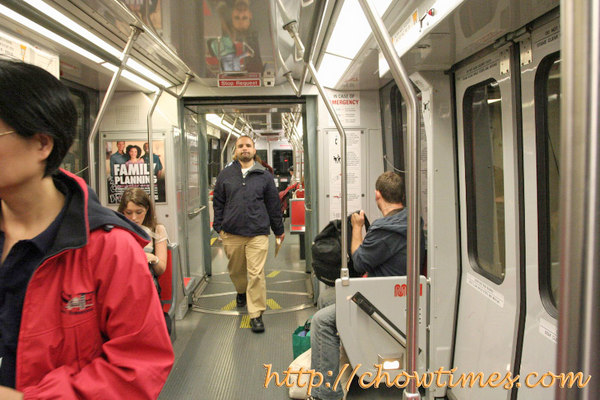 Travelling on the Trolley Buses were awful. At one time we took the buses through Chinatown and the rush were unbelievable. There were no lines and people just rushed on board from both doors even though there are people who were trying to get off. There were quite a bit of shouting and all … and Nanzaro had a horrid time being squeezed from all sides. 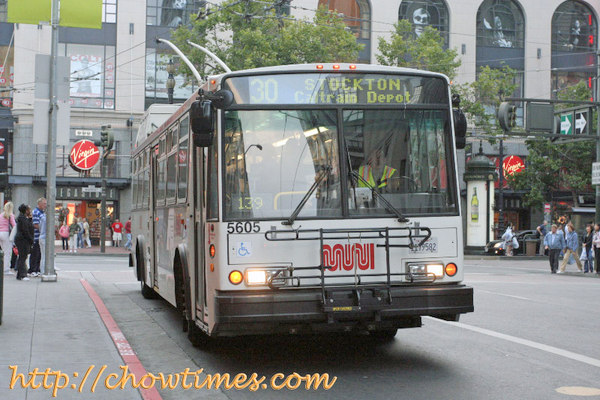 At times when there are lesser passengers, it’s pretty comfortable. The buses have very good coverage and and quite frequent for the routes we took. 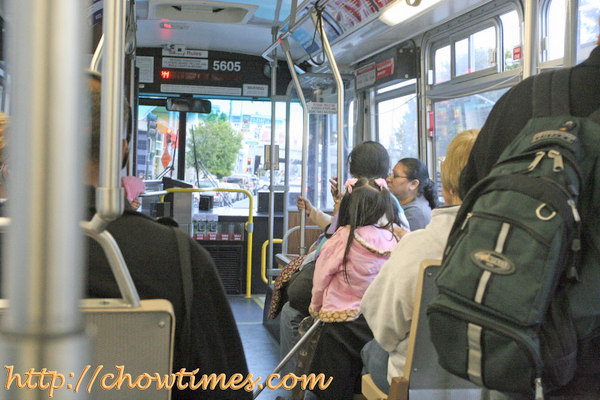