This is not about food. I thought I end this series on our trips to Washington with a recap of our experiences crossing the border.

Did you know that the Canada-US border is the longest border in the world? What is also interesting is that it is also an undefended border. Stretching from the Pacific Ocean to Atlantic, the total length is almost 9000 km. It is Suanne and my dream that one day we can drive from coast to coast. 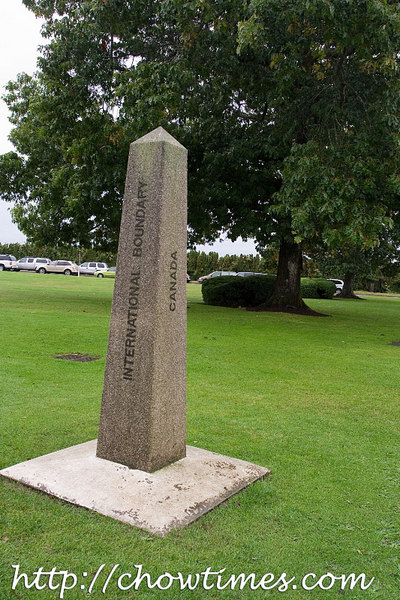 From Vancouver, there are two ways one could get across the border. The most common crossing is the beautiful Peace Arch Crossing. In between the two border stations, is a the Peach Arch Park. We like bringing visitors to this park because it’s very symbolic and scenic.

There is a few websites that you could go to find out the estimated border wait times. We like the ones here for southbound and here for northbound. They have web cams so that you can judge for yourself what the wait times really are.

The Peace Arch crossing (also known as the Douglas Crossing) is more commonly used by most people. There are three lanes with one reserved for the Nexus lane. Sometimes, some idiot would drive up the Nexus lane and then a bunch of other idiots will follow suit, clogging up the lane. So, stay away from the right most lane if you do not have a Nexus pass. I really wished that the US border guards throws these selfish idiots to the back of the line.

Oh, thanks for all the comments about the Nexus pass. One thing to add … I heard that you could opt to pay in either in USD or CAD. The rates were still old … you can either pay USD$50 or CAD$80. Can someone confirm that?

The other crossing is the Pacific Crossing. This is where trucks and buses crosses the border but they also have 6 southbound lanes for cars. Most of the time, the lines here are a BIT shorter … not all the time, so you better pay attention to the radio.

The lines are OK … as long as there are no queue jumpers. It is the selfish queue jumpers that make things worse.I see that there are a lot of cars merging in from the Duty Free Shops … even though it is 6:30AM in the morning! I think these cars figured out that if they turn into the DFS and then out again, they get to merge into the queue further up. There is also some people who try to merge from Avenue 0. 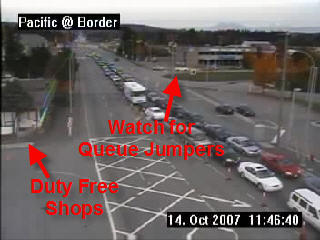 I had always wondered about the security systems employed at these places. I know they take pictures of every car as you drive up to the booth. Prior to that, there is these “pads” on the left and right. It must be some sort of a scanner … anyone know what they are for?

I had also wondered if the US computer system is linked to the Canadian one. I think they do and do share information between them. However, I noticed that the US Immigration scans our passports each time we cross but the Canadian does not even look at it. 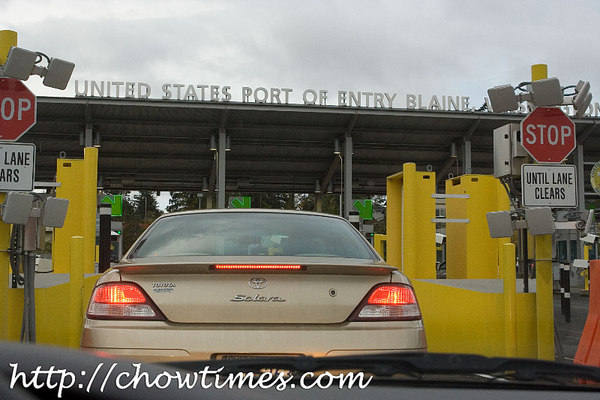 Oh … it was only recently that we found out we could buy meats and stuff and bring it across back home. I think it’s about 5kg or something like that. Despite they saying that the personal exemption is only $50 for a day trip, we have been normally buying over $300 of stuff. The Canadian customs just wave us on. I think they don’t really care to tax us for these things. I also think that as long as you’re honest, they let you through. These guys at the border, I think they have been trained to catch dishonest eyes … like, you know, the way you blink when you tell a lie? 🙂

Unlike at the US border, the Canadian side sometimes does not even want your passport! They just ask where we stay, how long had we been away and how much had we brought back.

A friend of mine had a horrendous time coming back … she told me she had to wait for 3 hrs to cross the border (from 9PM to midnight!).

Another friend told me about a trick to beat the queue. Use the Pacific Crossing, drive up to the Duty Free Shop and buy a bar of chocolate and they you can get into the “Duty Free Lane” … no traffic and drive right up to almost the booths. It would not fair to do that.

Alright, that’s it for this series of our trips to the Washington State. Am going to the Big Apple tomorrow … hopefully! I said “hopefully” because our Travel Services had not issued me the travel authorization yet.

So, be good to Suanne while she blog about her recipes and those of her cooking clubs. Give her lots of comments. She loved feedback.

It Came Upon The Midnight Clear …