I did comment that most of the subway stations in New York leaves much to be desired and that they kind of smell in some places. Yucks! However, there is one that is the prettiest of all … it is the Grand Central Terminal.

The Grand Central Terminal is located in midtown Manhattan somewhere on 42nd Street. This was the main train terminal in New York City and was built in 1913. During that era, train transportation is at its peak. Even today it is known as the largest rail station in the world in terms of number of platforms.

The station is well maintained but really there is nothing much to see or do. Like the hordes of other tourists, I just took pictures of the main hall and walk around a bit. I would not be surprised if this is the most photographed train station in the world.

One thing I noticed too … there are fully armed soldiers in the building. They try to be inconspicuous but you won’t miss them … standing at corners with their automatic rifles. Should I feel safe or should I not? I guess I should.

A reader of chowtimes (Marie Franco) recommended that I go try Oyster Bar. I did a bit of research before I went and indeed, I found that the Oyster Bar in the station is world famous for their seafood and interior decor. This restaurant is as old as the Grand Central Terminal having opened the same time.

It was easy to find. I went and checked their menu at the entrance of the restaurant. It was expensive to say the least … their catch of the day starts at $25. It’s my first day in NY and I was a bit careful about my spending. I decided it was too much to spend. Instead, I went to their sandwich take out counter.

Sandwiches are much more cheaper. The guy that manned the counter was a spectacle. It was a one man show and I had never seen someone worked that fast before. You got to see for yourself to know what I mean.

The take-out bag looked nice, don’t you think? People would had thought I had bought something from 5th Ave or something. I went to the food court downstairs and had my lunch there. 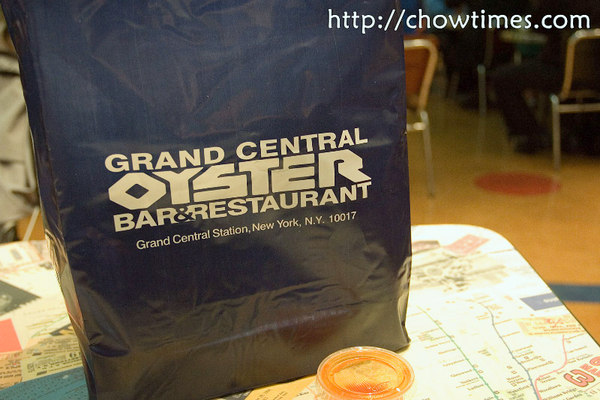 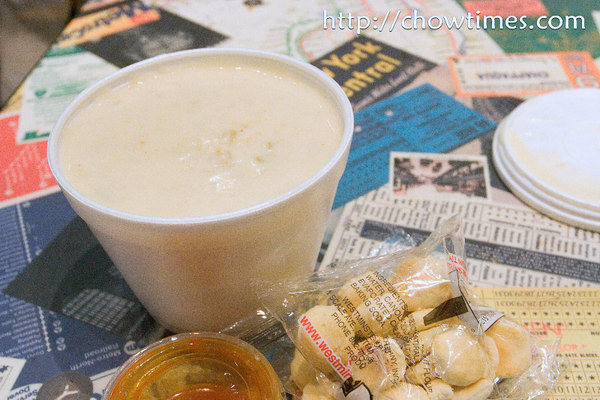 I bought the Fried Oyster Po’ Boy Sandwich. The hard crusted bread with airy center was some of the best I had ever tasted. It was tough though … and a lot of work chewing it through.

I had never had fried oyster sandwich before but … oh boy … they are simply the most delicious tasting sandwich I had ever had. There were quite a lot of big soft fresh and succulent oysters. A bite through the hard crusted bread squishes the juiciness of oysters out … it was marvelous.

So, that Clam Chowder and the sandwich costs $15. It was a lot of food … just what I wanted. I am not going to have dinner until I get back to the hotel late that night.

Blogging about it now, I am kicking myself for not going in for a full seafood lunch. I’ll bring Suanne and go for their sit down dinner if and when we get the chance to vacation in NYC next time.