Katz’s Delicatessen had always been high on my list as a place I must visit. Katz’s Deli has always been considered NYC’s best’est deli. It is a Jewish kosher style deli and lies smack in the middle of the Lower East Side (which had been considered as the center of the Jewish culture in NYC). It’s amazing knowing Katz’s had been here for the last 120 years!

Katz’s Deli has a really strange way of operating their deli. Everyone who goes into Katz’s are given this small stub of paper. Be warned … don’t lose it or they will charge you something like $50 or something like that if you leave without one!

You see they mark what you have purchased on this stub and then you pay with this stub when you leave the deli.

It took me a while to get used to the system. First, you have a choice of waited on the table or you line up to get your sandwich from the cutter. Only the table by the wall are waited on while the rest of the tables are self served … weird. I can’t figure why the difference.

The entire deli is so busy and unbelievably noisy. 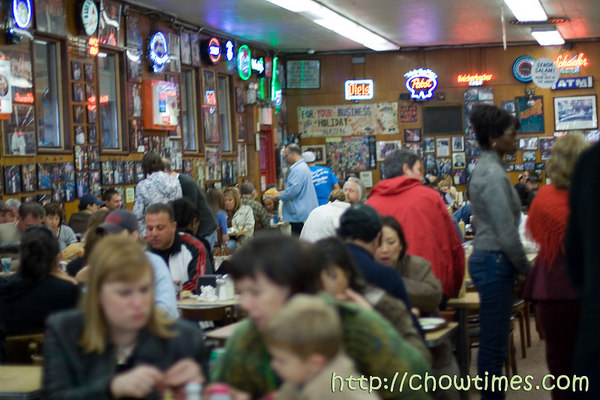 When you think of Katz’s Deli, many of you will probably remember the Billy Crystal and Meg Ryan movie called “When Harry Met Sally”. It is one of the most funniest movies of all time. It is in Katz’s that they have the infamous scene where Meg Ryan faked “it”. Check this youtube out:

Right in the middle of the dining area is that sign that shows the table where Harry and Sally sat. That is the most popular table in Katz’s without a doubt. Now you know what the sign means what it says “Hope You Had What She Had”.

Everyone gets a plate full of pickles. There are two types. I love the “normal” cold crunchy ones but the other one is way too sour for me. I finished off the “normal” ones but left the sour ones half eaten. Nice … very nice.

I am not sure what Sally had but I ordered what I think is the best that Katz’s Deli has. Almost every table has at least one of these … Katz’s Pastrami.

Look at that … it’s wickedly delicious, don’t you think? I had never had such great juicy pastrami sandwich. It was hand carved and served hot. Oh … be warned … there are signs that warn you NEVER to ask for mayo. I dared not find out … I did not ask.

I guess it’s because their sandwiches was great just as it was … no condiments needed. It came with really thin slices of bread. It certainly was messy eating this as the meat pieces keeps falling out all over the place. I had a great time and my hands were all greasy that I had to wash them in soap in the washroom. 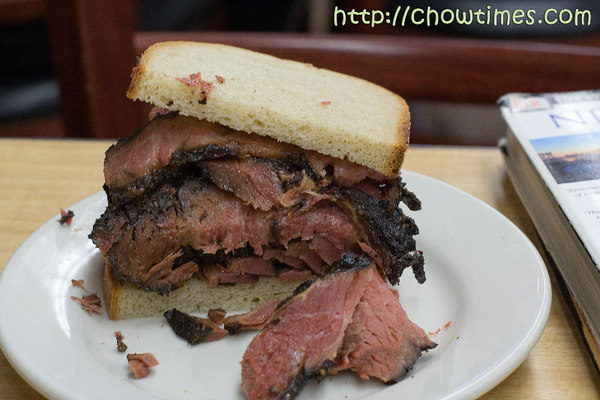 For the drinks, I ordered a very New York beverage … the Egg Cream. I had absolutely no idea what Egg Creams are except that I read about it. Apparently there are two choices … chocolate or vanilla. I chosed vanilla.

Egg Cream is made of milk and sletzer (soda). Despite the name, it has no eggs nor cream. I am not sure why they called it egg cream though. I can’t quite make out the taste … it is creamy and fizzy … and I love it.

There is one and only one Katz’s Deli. It’s an experience eating there. When you are in NYC and if there is only one place you want to visit for a meal, I totally recommend Katz’s Deli.