The name Gettysburg is made famous because of the events of the American Civil War. It is here that the bloodiest battle occurred over 3 days which ended with the victory of the Union army over the Confederates. It was this decisive battle that was the turning point of the Civil War from which the Confederates army were so decimated that they never recovered.

At the end of the battle, that is when President Lincoln visited the grave of the soldiers and delivered the most powerful speech in American history — The Gettysburg Address.

We started the tour of the Gettysburg National Military Park from the Museum and Visitor Center which is located just off the main town of Gettysburg.

It is here that my trusted Canon 350D (a.k.a. the Canon Rebel XT) is finally showing signs of dying. I had this camera for three years now and every now and then, up pops the “Err 99” message. It’s not that the camera is unusable but there is no telling when the error will come up and the only way to fix this is to power it off and on — and that works only some of the time. Good thing we had a backup point-and-shoot camera which came in handy. From this point in the series, all shots were from the Panasonic Lumix DMC FX-55 which is not too bad except that sometimes the pictures came up bluish and I do not know how to effectively remove the color cast (see the first picture above … looked unnaturally bluish isn’t it?). 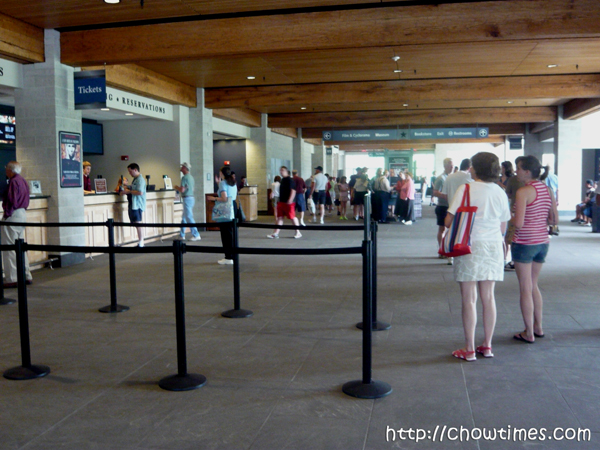 Anyway, it was here that we started the tour. This is the place where there is a museum, theater and starting point for the battlefield tour.

There are all sorts of activities … even organized ones for the kids where they dressed them up a Union soldiers and teach them drill. The kids seems to have lots of fun.

They have a handy brochure that suggests the tours available. We can do the battlefield tour either by bus or we can even have a licensed guide get into our car (for a fee) to lead us through the battlefield. The third option is to get a CD which you play in your car and use a map to navigate.

We opted for the Special which includes Battlefield Bus Tour and the “A New Birth of Freedom” movie for $29 each. I can’t stand having stuck with someone who I don’t know in the car for 2.5 hours — I mean, what if I don’t like his face or he don’t like my hair or something. And I am too tired to drive, park and get on/off the car for 2.5 hours. No siree, it is the bus.

We caught the movie which tells of the events that unfold in Gettysburg in the year 1863 which eventually led to a new definition of freedom in the United States. 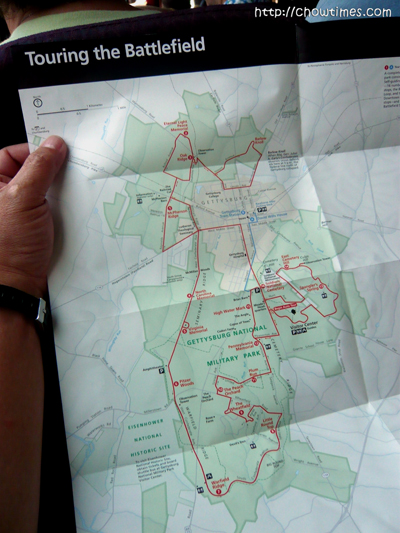 The Battlefield Tour is huge — all 6000 acres of it. Having a map is useful to get a bearing of who was where during the 3-day battle. 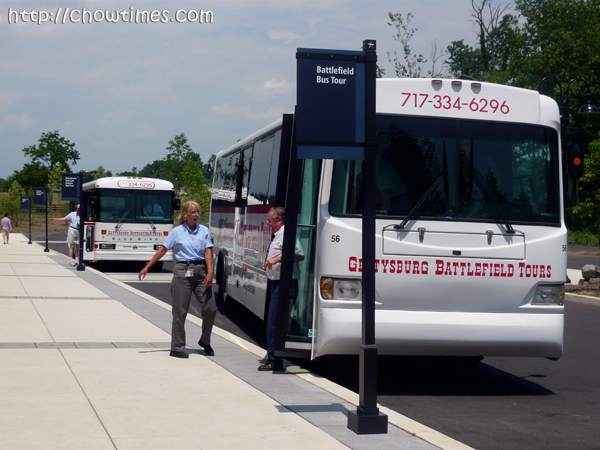 The Battlefield Tour is timed. On a busy day you would have to contend with a long wait. We had to wait 1.5 hours but it was OK because we spent part of the time in the movie and others checking out the museum.

Every spot we went to there were lots of people. I truly enjoyed this entire tour but Suanne was quite lost. It is amazing how much were documented on what happened during the Gettysburg battle. The tour guide was amazing with her knowledge and effectively brought us back in time.

The confrontation started when the Confederates army, led by the great General Robert E Lee, decided to march north into Union territory to strike a telling blow to the Union side. Fresh from stunning victories, the Confederates were confident and motivated. The Union was basically left to defend in the town of Gettysburg. 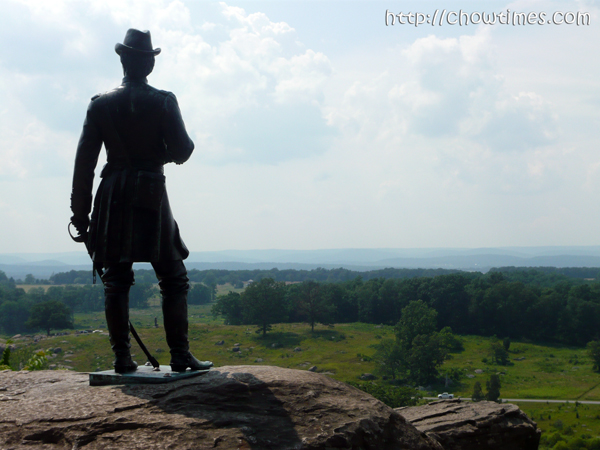 The Little Round Top is a small rocky hill crop outside of Gettysburg. Many said that it is the successful defense of the the Union soldiers on this hill on the second day of the battle that actually turned the tide. This is a strategic location as it is the highest point in the entire area and overlooks the entire battlefield. 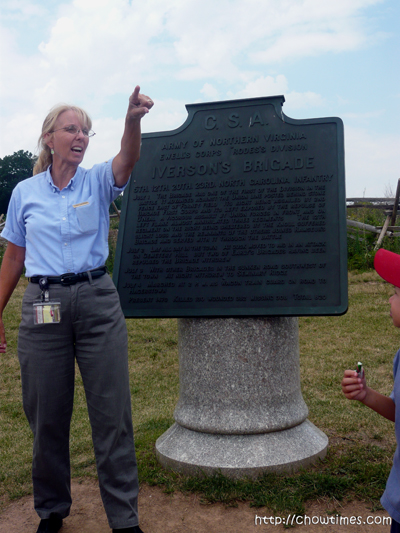 It actually took another two years before the American Civil War finally ended. See that memorial above … which says CSA. CSA stands for the Confederates States of America. I was wondering that if the Confederates had won in Gettysburg, would the USA today be known as the CSA?

There are monuments all throughout the battlefield — there must have been hundreds of them. Some of them were small and some were huge.

4.5 months after the battle in Gettysburg, Abraham Lincoln came to Gettysburg to honor the fallen. He arrived in this station which look the same as it was back then by locomotive.

President Lincoln stayed in this house which is currently being renovated.

And then made the greatest speech in American history which is known as the Gettysburg Address. We did not have the time to walk into the cemetery to the spot where the speech was made. I read a few days after our visit that the tree that was planted during the Gettysburg Address finally fell of old age. Too bad … we should have taken the walk.

Hmmm … am thinking now that the Gettysburg Address is perhaps one of the greatest speeches in world history, not just American history. Many non-American will know the words that resonate so clearly even today — many might not know the entire 2 minute speech but they at least know of the words that ended with “… and that government of the people, by the people, for the people, shall not perish from the earth. Here it is, the entire Gettysburg Address:

Four score and seven years ago our fathers brought forth on this continent a new nation, conceived in Liberty, and dedicated to the proposition that all men are created equal.

Now we are engaged in a great civil war, testing whether that nation, or any nation, so conceived and so dedicated, can long endure. We are met on a great battle-field of that war. We have come to dedicate a portion of that field, as a final resting place for those who here gave their lives that that nation might live. It is altogether fitting and proper that we should do this.

But, in a larger sense, we can not dedicate?we can not consecrate?we can not hallow?this ground. The brave men, living and dead, who struggled here, have consecrated it, far above our poor power to add or detract. The world will little note, nor long remember what we say here, but it can never forget what they did here. It is for us the living, rather, to be dedicated here to the unfinished work which they who fought here have thus far so nobly advanced. It is rather for us to be here dedicated to the great task remaining before us?that from these honored dead we take increased devotion to that cause for which they gave the last full measure of devotion?that we here highly resolve that these dead shall not have died in vain?that this nation, under God, shall have a new birth of freedom?and that government of the people, by the people, for the people, shall not perish from the earth.

Today, Gettysburg thrives on tourism. It is a delightful small town but with lots of cars and traffic jams.