Updated: 17th Feb 2011: This restaurant had closed according to Urbanspoon.com.

Hi All: I wanted to let you know that I had feedback from a few readers (Iranian and also non-Iranian) that some of the comments I had made on this post is generalizing, disrespectful and particularly hurtful. I had considered the feedback and re-read carefully what I had written. I do agree that some of the words were totally misplaced and that it could be interpreted as disrespectful, particularly to the Iranian community. For that I do sincerely apologize to each and everyone of you who felt offended. I want to admit that I had been insensitive in the poor choice of words used. It is very important to me (Ben) that I set things right. As such, I had made amendments to this blog entry by removing those words. Again my sincere apology!

If there is one major cuisine that I have never tried before, it is Persian cuisine. This is despite that there is actually quite a large Iranian community here in Vancouver, particularly in North Vancouver. My personal impression about Iranians in Vancouver is that they are either very rich or that they are great Java programmers. LOL! This is because ALL of the leads programmers (I had three of them!) I had on my project teams were Iranians. 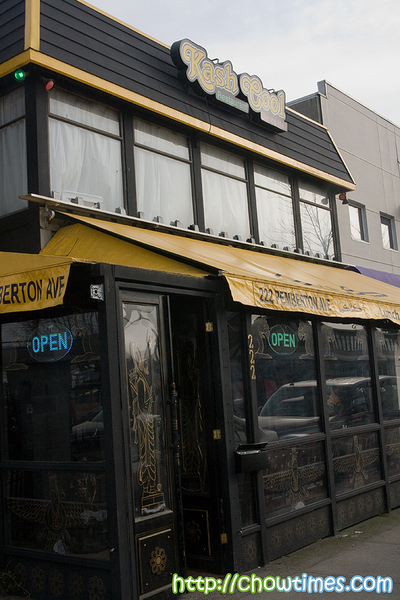 There was this day when I had to go the North Shore, I thought I should take the opportunity to try out Persian food … and I wanted to have real, authentic Iranian Cuisine. So, I asked Kazem who works in my company for a recommendation. Without any hesitation … he said Kash Cool.

Kash Cool is located on Pemberton in North Vancouver. Even though I have not been to North Van for, oh, 5 years already, it was easy to find Kash Cool. We met up with Angie (of Sea Salt With Food) and her kids for lunch here. 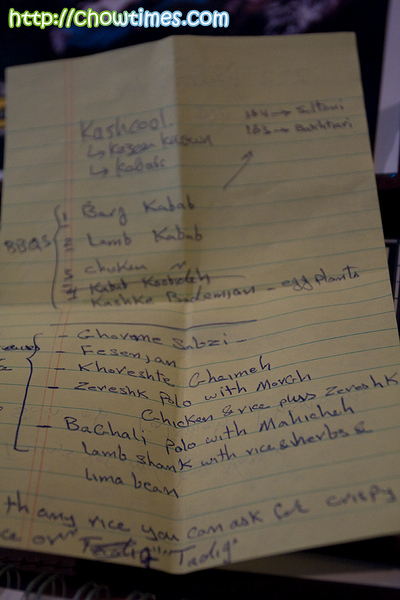 Before I went, I asked Kazem for recommendations since the only Persian food I know of is Lubria Polo which Suanne had blogged before. Kazem was giving me names that simply confuses me. So, I got him to write down his recommendation on a piece of paper for me to bring to the restaurant.

Kash Cool does seem very authentic. They have a little fish pond right in the middle of the dining room. I find it kind of cool since most restaurant will maximize the floor space with dining tables. I later learned that having a pool with red fishes are very common in Iranian home’s front courtyard. 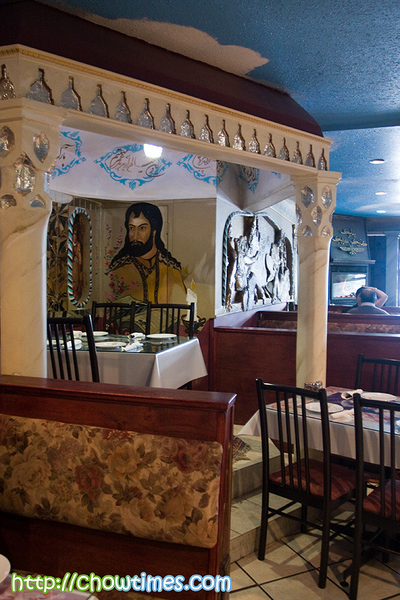 Kazem told me that the owner decorated the entire place himself. There are a lot of large painting and sculptures everywhere. I find that very impressive and does think that the owner sure had an artistic flare in him.

I also noticed there were quite a number of pillars. I think they are mainly for aesthetic purposes. I later found out that pillars are core elements of the Persian architecture. 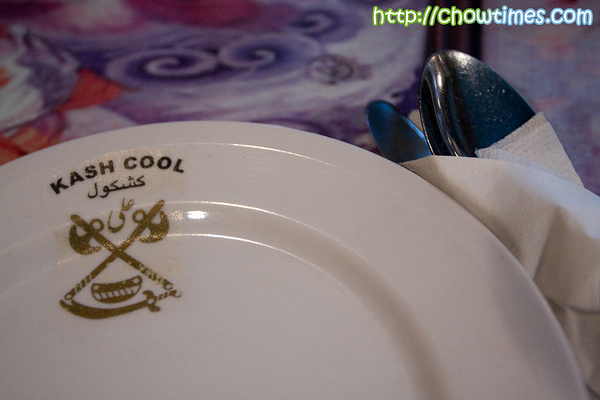 I had to ask them why the name Kash Cool. I teased the friendly wait staff if they love money because of the name. She chuckled and told me that Kash Cool is the name of a dish.

We were the only Chinese looking customers there. I initially feared that I might have problems ordering. However, they were extremely helpful and could see that we are unfamiliar with the menu.

However, I also felt uneasy about being pushed. I felt there were an certain unnecessary degree of hardselling. It was when I ordered ONE chicken and ONE lamb and they will repeat TWO chicken and TWO lamb. I then repeated ONE … and they repeated TWO … this went back and forth for like five times. LOL! It sure made me uneasy, awkward and embarrassed especially when I had friends there too.

Suanne had Chai Tea which came at $2.95 per pot. They kindly gave us a few glasses even though we ordered only for one person. I tried it and find it very much like normal Chinese tea with a hint of herbs.

For me, I asked for something traditional. I am the adventurous type who will try anything. They suggested Dough (pronounced as “doo”). They were kind enough to be concerned that I would not like it and suggested that I try only a glass even though they said that people normally order by the pitcher.

Dough is yogurt plus soda plus salt and it costs $2.95. It wasn’t bad really — it was kind of good. The more I drank it, the better it was. It was certainly much better than the yogurt I had in Saravanaa Bhavan. 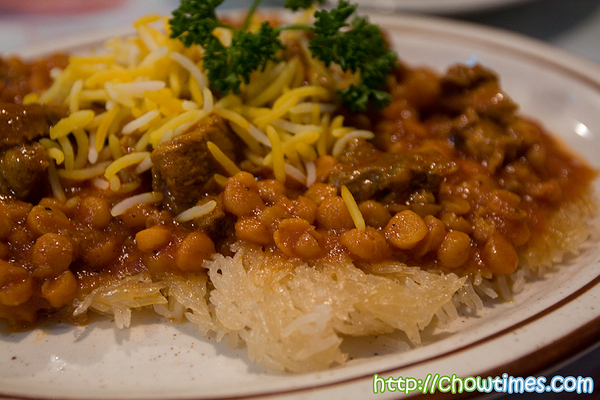 We started with appetizers … and the first one is called Crispy Rice. It is called Tah Dig, I think. The crispy rice made me think of the Chinese Crispy rice … the part where you scrap it off the bottom of the pot. To all of us this is alright … I would not say it is great because Chinese normally do not serve stew over rice. $8. 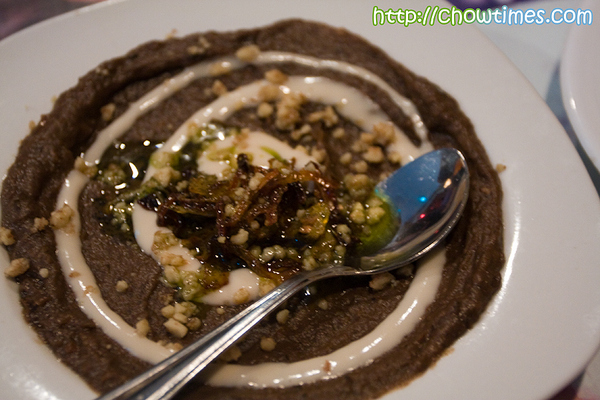 The next appetizer is the Eggplant Dip. It is a mix of eggplant, lentils, and garnish with dry whey, onions, garlic and mint. It looked interesting served in a swirl of ingredients. We’re supposed to mix it up to use as a spread.

The dip came with Lavash Bread and some fresh herbs and onions. 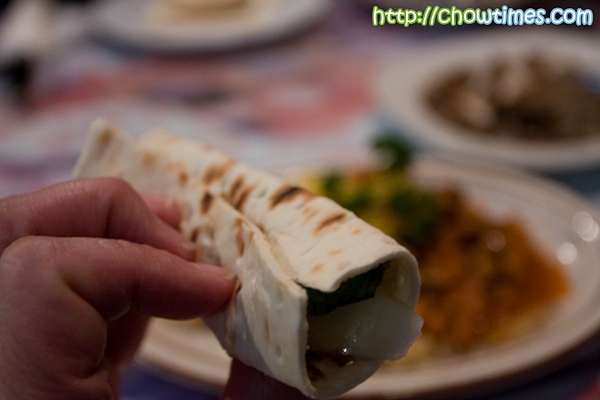 We spread the dip on the bread and rolled it up with onions and herbs. To me it was quite OK but the kids liked it a lot and finished it off really quick. I was told this is a favourite appetizer for Persians. $8.

The third appy was the Shirazi Salad. It is a combination of diced tomatoes, onions and cucumbers … and served with olive oil, lemon juice and mint. After we mixed it up, it actually looked like (and smell like) salsa. $5.

I hope I got this one correct. It is Lamb Shank but in the menu it is called Sheved Baghaley Polo with Lamb Shanks. The rice were flavored with green herbs and saffron which gives it a nice fragrance. But the Lamb Shank was great … big chunky meat. I expected the kids to like this too because they love rice but am surprised none of the kids touched this. I realize later on that what they did not like was the green herbs. Kids hate greens! This one is $15. 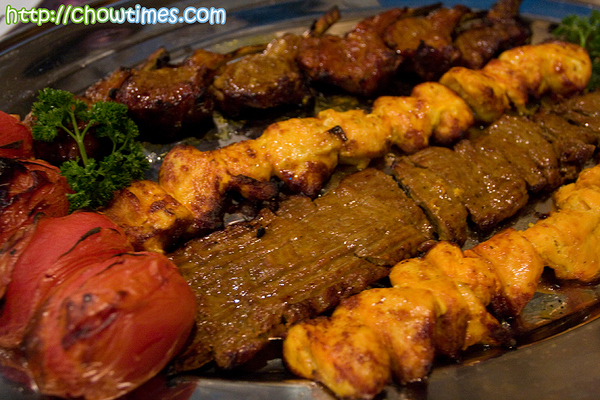 This is the main or the main dish. This is what Kazem was raving to me about … Iranian Kabab. They make it fresh and require at least 20 minutes to prepare. So be prepared for the wait but it will certainly be worth it.

We ended up with 2 orders of Chicken (Joojeh Sultani Kabab), a Lamb Rack and a Beef Kabab. I actually find these pricey. Although the skewers were large and more than enough for 1 person, you can almost consider each skewer at the price of a steak. Some of their best Kabab is almost $30 while others are about $15. 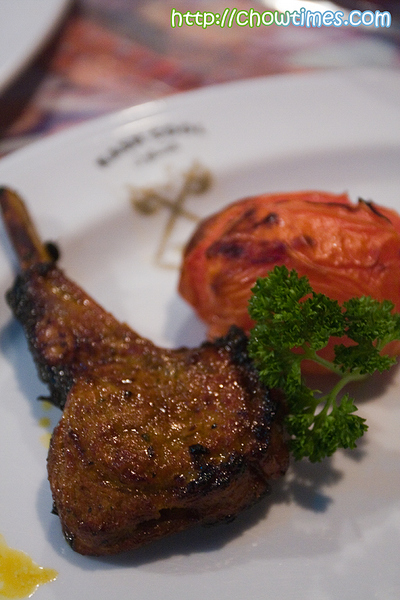 Their best meat is the Lamb Rack Shishlik Kabab. They were unbelievably juicy and tender — utterly delicious. The $25 skewer came with 6 pieces of lamb rack and saffron and flame broiled. This were all finished off no time. I recommend this one … it is simply the best we had. 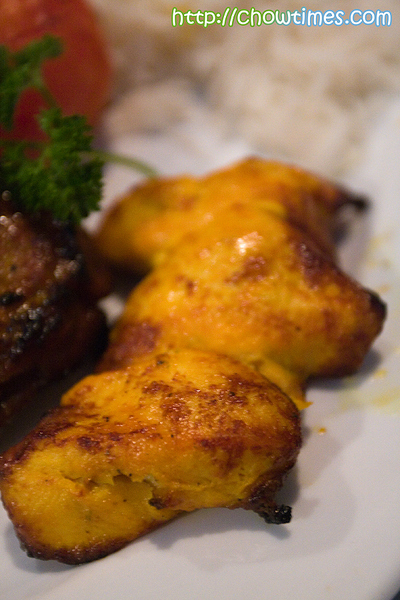 If I am not mistaken, the Chicken is called Chicken Joojeh Kabab. It is a skewer of marinated boneless chicken breast. Nanzaro duly declared that this is better than his favourite Indian style chicken even though it is not spicy. 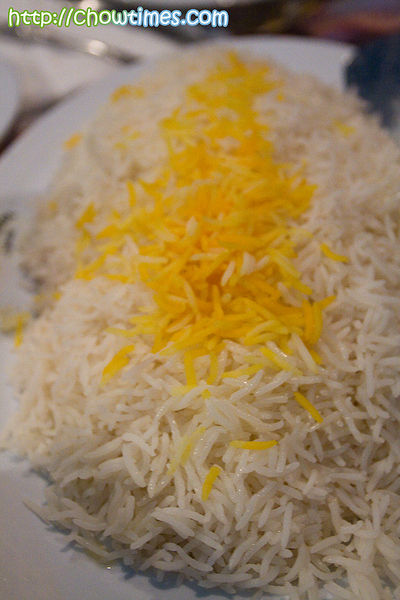 I was glad that the Kababs came with a huge serving of rice with saffron. You guys are going to be disappointed with me … I am at myself too.

Did you know that Saffron is the most expensive food ingredient in the world? I think it is even more expensive than gold by weight. Suanne had blogged about making Basmati Rice with Saffron before. Despite that I just could barely pick up a minutest hint of saffron and still don’t know what saffron tastes like. LOL! Suanne does … it was flowery taste, she informed me.

The meal came up to $176. They added on a 15% tip automatically on top of the $153. I think it’s because there are seven of us dining here. Call me stingy or what. We were actually a party of only 3 adults and 4 kids and so felt the pinch of the total amount.

You know what I did not like? It is that when they brought the chit for me to sign the Tip column is still empty. If I had not noticed it, I would have paid another tip on top of the 15% they already tagged on the $176 total. Good thing Angie and Suanne pointed this out. As you know with guys, we never check and just sign. LOL!

Suanne and I was thinking after the meal that for $176 we could have a big feast in a Chinese restaurant. The lamb was juicy, tender and delicious but still it was expensive … $176 for 3 adults and 4 kids. Have you ever paid that much for a family meal?

Tibisti All You Can Eat