Updated: 17th Dec 2014; This restaurant is closed according to Urbanspoon.com.

Pam’s Kitchen is known for their Rotis from Trinidad and Tobago.

Pam’s Kitchen is located in the intersection of University Way and NE 50 Street in Seattle. Along this row are actually a lot of hole-in-the-wall type of eateries of almost every major cuisine. We counted among others Filipino, Chinese, Greek, Hawaiian, Japanese, East Indian, Pizzas. All of them looked very good from the outside.

Walking into Pams’ Kitchen, there were an unmistaken (and somewhat overpowering) aroma of spices and curry. Service was very quick and friendly. They gave us two tall glass of water the moment we got settled. The place was not very big and we can see around us that their customers looked like students mainly. Definitely no families here that night.

Strangely, we noticed a rather prominent sign hung from the ceiling that says “We reserve the right to refuse service to anyone”. We wondered what that sign was all about and if they have rather rowdy customers here before.

They have rather unique drinks. Suanne had the Peanut Punch (Milk Base) which costs $3.75. This is not like anything we ever drank before. It tastes like watered down peanut drink with milk. It actually tastes like peanut butter. Am thinking that perhaps one could make this by blending a few spoonful of peanut better with milk. We like this.

For me, I had the Sorrel which is described as Caribbean Hibiscus Petals, spiced boiled and sugar sweetened. It has an obvious floral taste and smell to it. It is also kind of like chai tea with herbs and spices. We find the taste quite unique and yet familiar. Although it is described as sweetened, it is also a bit sourish. $3.50.

The drinks were a great start to the main meal. 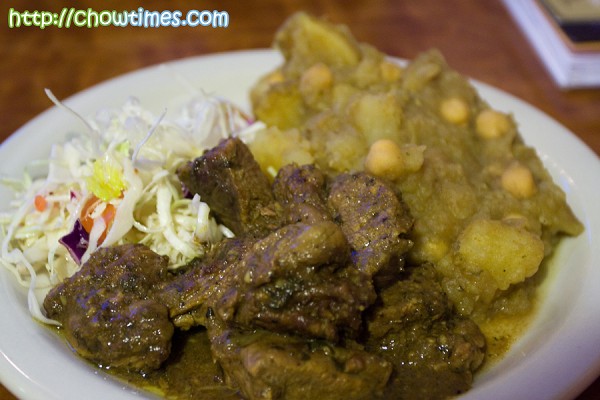 When in Pam’s Kitchen, one just have to have Roti. There are two main selections you need to make when ordering Rotis:

Suanne chosed the combination of lamb and paratha. The lamb was spicy but not very hot. Meat was tender to the bite. It was very well made and flushed with flavour. The drawback was that it was rather dry’ish and that we wished they had more curry sauce to dunk the roti with. We also liked the mash potato and chick pea server on the side … it looked deceptively mild but was spicy hot. Nice.

I read from the menu saying that they hand wash all the meats thoroughly with lemon juice.

The paratha was fluffy, almost pillowy. This is like a thicker version of the Malaysia Roti Canai. It is also dry and had a lot of taste of flour and dough, like it is not fully cooked. The piece was very large and will fill you up quickly. Personally, if this is the roti Pam is famous for, then I would opt for Malaysia’s Roti Canai anytime. [Cringing now … expecting brickbats thrown my way. LOL] 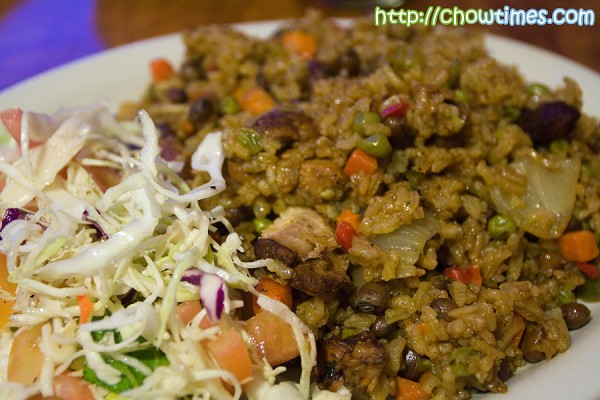 I had Pelau for my main. It is described as “Imagine Jambalaya, boneless dark and white chicken swimming in an ocean of chopped carrots, celery and white rice browned by pigeon peas or red beans).

I guess I did not “imagine” enough. I like fried rice but, personally, not mushed up rice. When it came I thought to myself this is exactly what was described word for word but it did not occured to me it is like this.

Anyway, I since I got this I took this … and actually liked it! I still did not like the texture of the soggy rice but love the flavour in the Pelau.

We also ordered a side dish … Spicy String Beans. It was only mildly spicy and has a sourish taste to it. We thought we should not have ordered this as the main dish with the drinks were already too much food for us.

Their chili is wickedly hot. You want to spice up your food, the Habanero sauce is rather lethal. I just took a small drop and the heat lingers in my mouth for a long time. The milk base peanut punch did nothing much to ease the pain.

The bill came up to $48 after tips … and that is USD, mind you. So, foremost in our mind is “boy, this is a bit too expensive for rotis”. This is almost twice the money compareed with The Kingfish cafe we had earlier that day. So, here is my verdict … Pam’s Kitchen is over-priced and over-hyped [Ducking again the brickbats thrown my way]. The food was not bad, mind you.