This is a complementary meal from Brix Restaurant and Wine Bar.

Oh boy! This was exactly what I needed.

I tell you … taking a week off work is not necessarily a good thing. I took a week off work to clear off my accumulated vacation days because HR sent a note that says “use it or lose it”. So, I took a week off and decided not to get on the VPN … and as expected when I got to the office on Monday morning last week, over a thousand emails greeted my return to work — many of them with a red exclamation mark shouting “urgent”.

So, the past week had been spent on catching up on work and dealing with issues. I must have spent 50 hours at work that week. With great weather at the end of week, I sure was glad it was all over. Suanne and I decided to just go downtown for dinner to cap off the week. 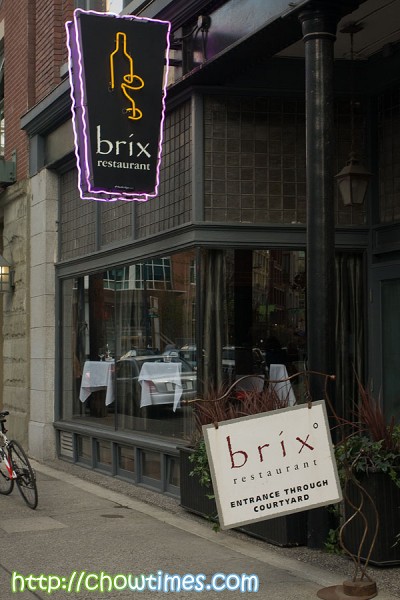 We decided to go to Brix because we were curious about the new First Seating Dinner Menu that we found on our email. Brix is located on 1138 Homer in Yaletown. As you all well know, parking in Yaletown is a challenge. Added to that it was a Friday afternoon and also the Canucks playoff game happening that night.

Brix does offer valet parking ($8) but the good thing a car was just pulling out from one of the many street parking bays.

You really should check out Brix’s quiet courtyard sanctuary which tucked away from street noise while opened right to the street. It was absolutely charming with high glass covered roof. We wanted so much to eat out at the courtyard but it was still quite chilly that day. The courtyard has heating but it was a bit too cold for Suanne.

So we decided to take the table in the inside of the restaurant which presents a whole different setting with rustic brick works and high ceiling. Since we were early, we get to choose our tables … and choose the one by the window which is on a raised platform. It was a great table. We got to see the world go by and at the same time have a commanding view of the dining area. We figured later that the platform could be used as an altar for a wedding reception.

This is one place where a nice table is as important as the meal itself.

Service was exquisite. Suanne and I really wanted a quiet dinner to put the week behind us. The wait staff who waited on us can read us quite well. She briefly explained the menus (they have a few of it) and brought us the bread. There were three types of bread and we were informed that they are all made in-house by the pastry chef. We like the soft bread with herbs the best.

The bread came with butter, olive oil and balsamic vinegar. Nice! We liked it so much that we actually had two refills of the bread throughout the dinner. This is how bread should be served … made fresh and with choices for the customer.

We opted for the $29 First Seating Dinner Menu, which is paired with wine as an extra if you so choose. With two options for the 3-courses available, choosing was an easy “one-of-each”.

You know what impressed us a lot? When we said we wanted one-of-each, they asked to confirm we meant to share. We said yes and they actually set us up to share with extra plates — extra warm plates. Brix sure is attentive.

One of the starters we had was the springrolls. The slim and long springrolls were made to be easily handled as finger food. They are filled with julienne vegetable and tofu and sprinkled with salt on the outside. It was crunchy to the bite especially with the thin hard wrapper.

The best part? The sauces! They served this with three type of sauces. There is the aioli, papaya sambal sauce and shitake hoisin — absolutely marvelous. The shitake hoisin has a little saltiness in it which brings out the best in the springrolls. What we like best was the papaya sambal sauce which is spicy. I had never quite had anything like this before and I think you will like it too.

The other starter was the Spinach greens tossed in orange balsamic vinaigrette. There was a generous amount of wild mushroom underneath the greens which is topped with goat cheese. This is simply some of the better salad I had.

On to the main course. It is called the Seven Spiced Grilled Alberta AAA Beef Tenderloin. Made medium rare, it came with a liberal amount of light Soya Demi Glace. The demi glace made the already juicy steak a lot more moist. The steak is one part of the story …

The other part is what they call it the Florida Rock Shrimp Fried Risotto. You see, I am a rice snob and I really don’t think highly of soggy rice like risotto. But for this, I am making an exception. Suanne and I actually liked it … it was bursting with flavour and the texture is somewhat like fried glutinous rice.

The other main was the Grilled Wild BC Sockeye Salmon. We like the fact that it came in one big thick piece with a charred skin on one side. It had the perfect moistness and went really great with the gherkin aiolli.

Look at the sheer thickness of the salmon steak!

Underneath the salmon was something that I thought was some fat sausage. It was not. It was Prosciutto wrapped Nugget Potatoes.

Capping off the meal was a perfect combination of favourite desserts. Rather than just one type of dessert, they made this:

Suanne was pretty excited over this. It has everything … warmth of the bread pudding with the cold of the Dulce de leche ice-cream… crunch of the caramel on the banana with the softness of the sweet banana. It was not the prettiest looking dessert we had but it was certainly one of the better ones.

That dinner was perfect for us and exactly what I needed. What we like a lot was not just the food but the I-can-read-your-mind service and the intelligent settings they made it. From the functional aspect, I was really thinking that this is a highly configurable restaurant. They can as easily make this a place for events like weddings and even business functions without shutting the place down to other customers because they have a very separate courtyard which has its own charm.

Too bad Suanne and I are not wine people because Brix has a really extensive wine menu and have pairings and 2-oz sample sizes too.