This restaurant has been closed according to Urbanspoon; updated on 30 April 2010.

Our boys had been hankering us for Vietnamese Pho.  I know it had been a while since we had Vietnamese.  It is because I got so bored with Pho.  I mean, there is really very little that separates one Beef Noodle place with another. 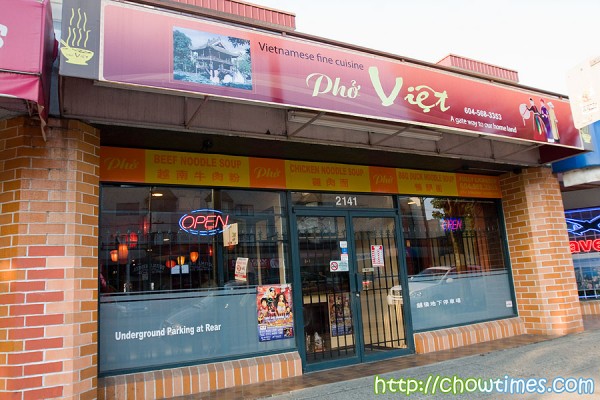 We decided to check out Pho Viet simply because they had the prettiest signboard along Kingsway.  Moreover, it has the words “Vietnamese Fine Cuisine” on the signboard too.  Despite that Pho Viet has the cheapest Pho in town too (more about that later).

I was rather stunned by the interior.  It was very tastefully decorated with orangey lightings.  I can quite certainly say that Pho Viet is the cleanest and well decorated Vietnamese restaurant I had been to. 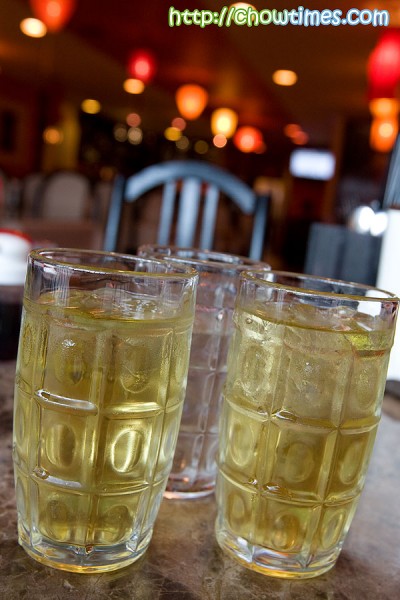 Service was excellent.  The lady (seems to be the owner) came by with our tea.  One would normally be served hot tea but here they served iced tea.  It is a good idea since it was a hot day too.

The menu had exactly what I wanted.  Although it had the usual noodles, rice and sandwiches, they also had an interesting Dinner and Chef Special section.

The lady owner was really helpful with our questions on their dishes which we are not familiar with.

They serve very fresh beansprouts.  You can see it from the sheer whiteness of it, especially at the roots.  On top of that are the normal basil leave and also this leave below which you will normally not find on other Vietnamese restaurants. 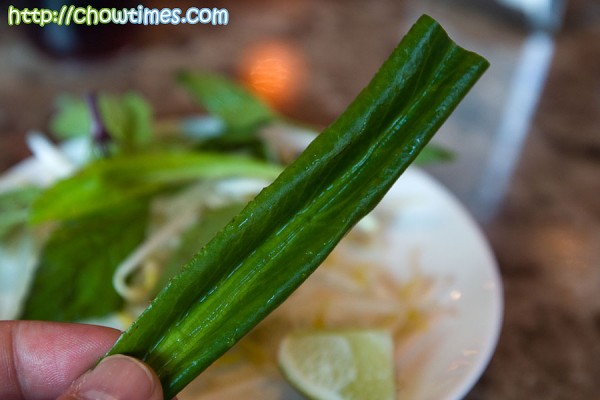 Even though she did not know the English name for this, the lady owner told us it is from the family of cilantro.  It has the fragrance of cilantro leave and evokes a nice fragrance on biting it.  We like it.

We asked why we don’t see this in most restaurants.  She told us that it’s because it is more expensive.  We were quite impressed up to this point.  It does seem to us that Pho Viet is trying very hard to stand out from other Vietnamese restaurants.

The above is the cheapest Pho that we had come across — and perhaps the cheapest in the whole of Metro Vancouver.  For the month of June, they are having what they call the “Anti Crisis June Special” where all phos are $4.99.  The regular prices are from $7.75 to $8.50.  You got to check this out yourself.

Despite the special price, the pho was pretty good with the normal amount of beef in it as one expects.  The broth was flavourful.  I expected this to be watered down but it turned out that it is even more flavorful than some of the places we had been to before.  Look at the color of the broth. 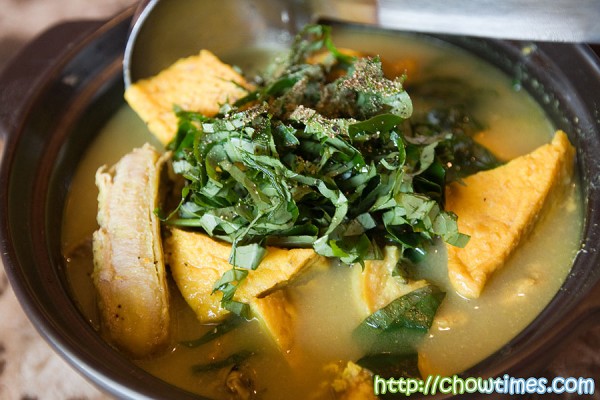 I decided to be adventurous and went for the Escargot with Green Banana Hot Pot.  The lady owner tried to discourage me  from ordering this because she said only Vietnamese would like it and was afraid that the guy with the big camera doesn’t like it.  LOL!

I told her I wanted to try it.  I had never had Green Banana before.  I had never had any type of bananas in a soup before too as a matter of fact!  And with snails in it … I was totally intrigued.  I had to give that a try.  This is $12.50.

The Hot Pot came with a huge serving of rice.  I thought they got this wrong because it seems like it is for two people. 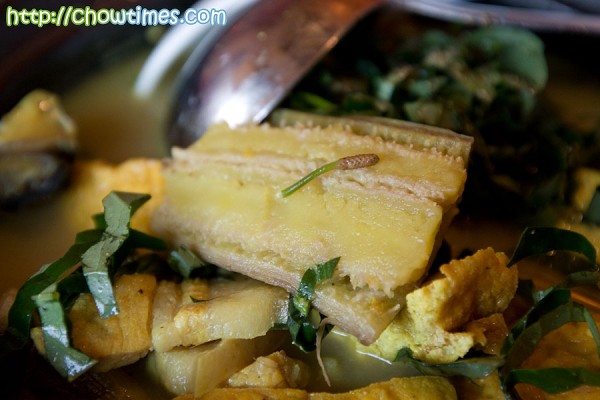 The green banana had an unfamiliar texture.  It was somewhat rough and fibrous.  I agree with the lady owner … it is an acquired taste in order to love this.  LOL!  It wasn’t bad at all, just felt strange to me.  Maybe that is the reason why banana is not commonly used in cooking this way. 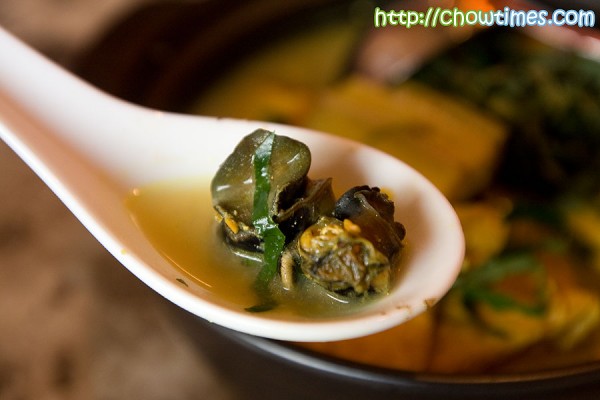 The escargo on the other hand was OK. It was chewy and a bit tough to the bite but otherwise tasteless. They are small — I had tasted bigger and better ones in Paris and Brussels.

Suanne opted for the Duck Leg with Egg Noodle Soup ($9.50).  We were told that it is served with Chinese herbal soup which was very flavorful.  We see that they had red dates, water chestnuts and lily flower in the soup.

This is a welcome change from the normal beef soup — we like the taste of the soup. 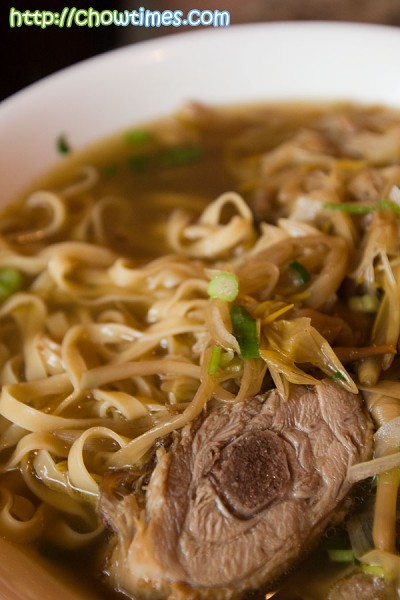 The noodles were a bit tough and chewy to the point that it seems not fully cooked.  I think they need to boil it more to soften it a bit more.

The best part of this dish is the duck meat they gave us.  There were quite a few large meaty pieces of duck meat.   For $10 and with a herbal soup, we thought that the price for this was pretty good.

Nanzaro had the Pan fried Beef and Shredded Pork on Vermicelli.  This is $9.50.  We did not try taste it but from the looks of it, it looked quite good.  I like the quail egg they gave in this dish.

The total came up to just under $32 before tips.  This is because they also had 15% off all dishes except for the $4.99 pho specials.  I really think that this place is worth checking out if you want to try Vietnamese cuisine outside of normal noodles, rice and sandwich food.

Pho Viet is kind of quiet the whole time we were there.  It seems like they are facing a lot of competition from the nearby Pho restaurants.  They had just been opened for 3 months and I do really want to see they succeed because Vancouver surely needs more Vietnamese restaurants like them.