Updated: 29th June 2010; This restaurant had been closed according to Urbanspoon.

We had been receiving emails about a promotion at So.Cial at Le Magasin.  It was all about their $12 Prime Rib Dinner every Sunday.  That sounded so good because I was thinking that it is going to be like the Garlic Studded Prime Rib that Suanne used to make at home.  Since Suanne does not use the oven in summer, there is very little chance I am going to get Prime Ribs at home for the few months.  We thought that at $12, we could not go wrong. 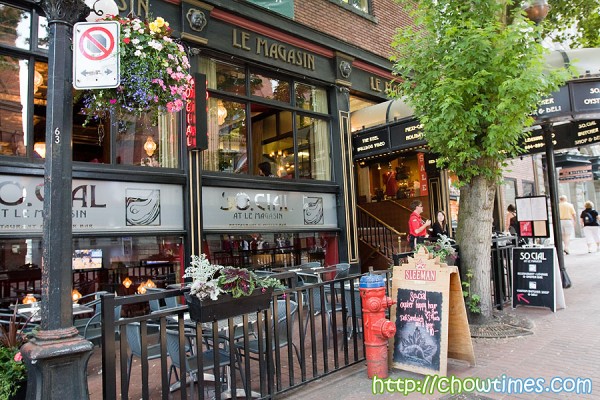 I was on the phone with ET of Doesn’t Tazte Like Chicken and asked if they would like to join us for the Prime Rib dinner.  Suanne and I sort of knew that Christina would say yes because she is a sworn “meatatarian”.

Does anyone know why So.Cial is spelt with a dot? 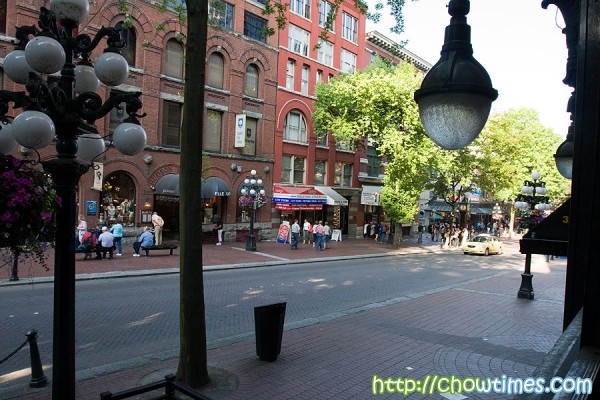 You know, I had never dined in Gastown before.  As a matter of fact, the last time I walked down this street was … wow … 8 years ago.  This tourist stretch was very quiet that day.  I guess it’s because it was a Sunday evening.  We got seated by the window which give a clear nice view of the street.

The interior was really pleasant.  I love the metallic ceiling and timber pillars.  The restaurant was virtually empty the entire night we were there.  There was only three tables taken at max … and none of them ordered the Prime Rib.  As a matter of fact, most of the customers does look like they were tourists. 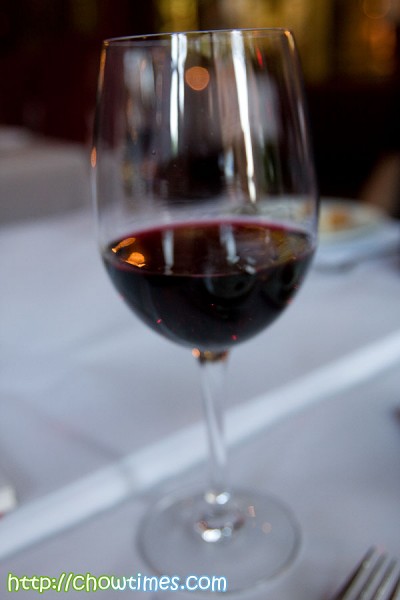 We each ordered their house wine — everyone except for Suanne.  It was about $5, I think.

We decided to start off by ordering some tapas.  It was $6 each.  For five, it was at $5 each.  Sounds like quite a discount right?

Oh well.  The tapas were nothing to shout about — it was generally tasteless.  It was way too little to share between the four of us anyway.  Imagine splitting each of these four ways so that we all get a taste of each!

Things sort of went down hill.  Despite that there were hardly any customers at all, service was not good … really slow and I felt deliberately ignored.  Bread was given to us with lentil dip … and it has 6 pcs for the four of us. The odd number of pieces was not even the problem, the bread was quite underwhelming … from looks and taste.

I can tell you that we were very civil and at no time aloof.  So, I was kind of puzzled what brought upon such poor service.

If you ask me, I think it was because each of us ordered the same thing — the $12 Prime Rib.  I felt the waiter face turned sour when we did not look at the menu and all we asked for was the Prime Rib.  Regardless what we ordered, I think it was plain “unsmart” for shabby service.

If not for the excellent company of ET and Christina we would have gotten quite crossed.  So the focus that night for Suanne and I was the company, not the dinner.

I was not too impressed with the food …

This makes me think of this phrase … Good things not cheap, Cheap things not good.  LOL!

You get the choice of sides … fries or salad. 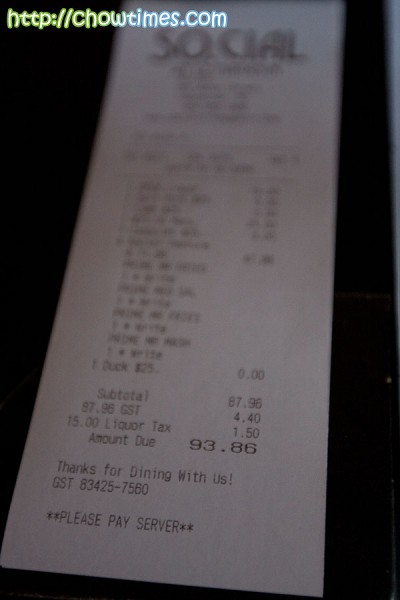 We had a great time and it was only because ET and Christina was such good friends.  Suanne and I always looked forward to dining out with them.  The good company certainly took our minds off the poor service.

What I felt was unforgivable was that the waiter did NOT even once come by our table to fill our empty glasses even when he walked past with a full jug filling the neighboring tables!  ET and Christina was gracious enough not to bring this up (neither did we) but it was in my mind.

Not filling our glass for 2 1/2 hours is simply something I find it difficult to understand nor accept.  I don’t fault So.Cial and am sure it is not the restaurant’s policy to ignore customers.  I think our waiter had a bad day and we had the brunt of it.