After a couple of hours of nap at the hotel, we had to drag ourselves out of the bed.  There is a nine hour difference between Barcelona and Vancouver.  It was at about 4PM in Barcelona which makes it 9AM Vancouver time.  I could deal with the jet lag easier because I am used to it but it was harder for Suanne.

We had not done any planning at all before this time.  I did some reading up of our Spain travel guide book during the flight.  Right up at the front section of Barcelona was La Rambla.  That was what we did.

It is a delightful street.  The pedestrian mall is lined with trees which provides respite from the hot Spanish summer sun.  Lots of entertainment all along the street.

La Rambla is popular with both tourists and locals.  While there are lots of souvenior stalls, there are even stalls that sells pets.

The part we enjoyed most about La Rambla is the La Boqueria.  This is also known as Mercat St Josep but everyone refers to this place as La Boqueria.  The history of this public market dates back 800 years.

La Boqueria is always teeming with people.  This is a good place to see and taste the food and ingredients of Spanish cuisine.

This is where we learned our lesson as stupid tourists.

Spanish summers are hot.  The thermometer was about 37-39C on most days we were there.  There was a fruit drinks stall at the entrance of the La Boqueria.  They looked so good and refreshing.  So we got one without so much thinking of how much it costs.  The sign said €2.50 and they asked for €2.65.  So we paid right?

… and then we walked further into the La Boqueria and saw the same drinks in other stalls were selling them for €1.00 for TWO!!  We were stupid tourists alright.

Since it was such a hot day and this now seems like a bargain, we bought another two for just €1.

We see a lot of Jamon (pronounced as ha-mon) throughout our vacation in Spain.  These are Spanish ham, cure dried.

The Spaniards take their Jamon seriously.  Some of them are really expensive and takes up to 2 years to produce.

They slice it real thin, like paper thin.  But we got the cheap ones.  I think these are the unwanted sides of the Jamon.  It was just €2.  We bought it to try and liked it so much that we always has some in the backpack throughout our vacation as a snack.

The Spaniards probably frown on these cheap stuff but we like it. 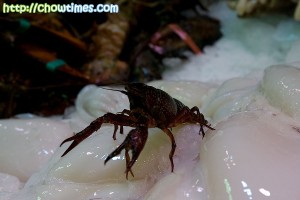 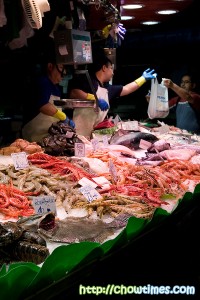 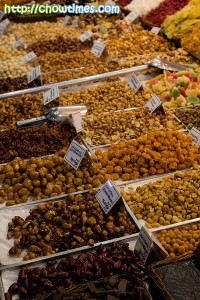 Half the market was closed when we were there.  It was already late in the afternoon.  We told ourselves to come back again one day in the morning when all the stalls are opened. 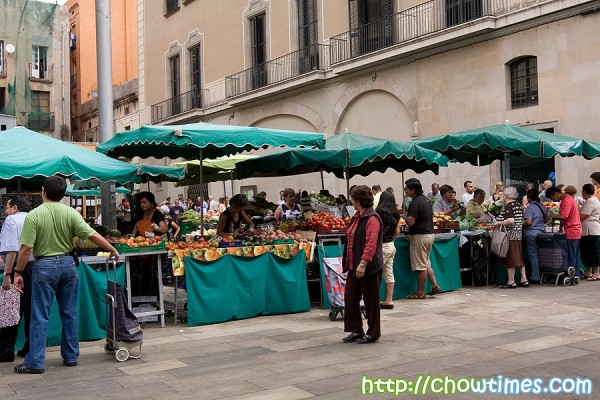 There is also an outdoor section of the La Boqueria — mainly fresh produce.

We walked to the other end of La Rambla to where the Christopher Columbus Monument is.  There are numerous monuments to Columbus all over Spain but this one is significant.  The monument marks the exact location of where Columbus stepped on his return from his discovery of the Americas and was greeted by Isabel and Ferdinand.

If you want to know where America is, just look at where Columbus is pointing.

We went to the top of the monument using the Barcelona Card we bought.

The monument was built for the Barcelona Expo in the 1880s.  Even at that time it was built, they have an elevator to go to the top.  It was quite a technological fete then.  Of today, the original elevator has been replaced.

The top is cramped and very narrow.  If you are overweight, you will not be able to get out of the elevator.   View from the top was interesting and you see some of the higher landmarks around Barcelona.  The picture above is the view of the tree-lined La Rambla.

La Rambla used to be a river bed eons ago.

Another view from the top of the Columbus monument.  This is Passeig de Colom.  I would translate this as the Columbus Passage … is that correct? 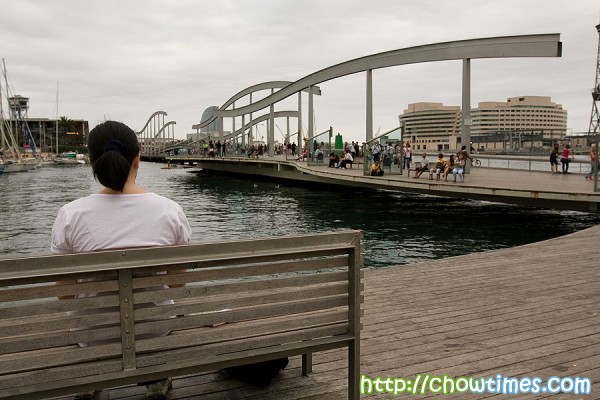 Further past the La Rambla is sort of the new and continuation of the original La Rambla.  We were quite tired and so rested here by the water for some time … just people watching and catching up with more reading about Barcelona. 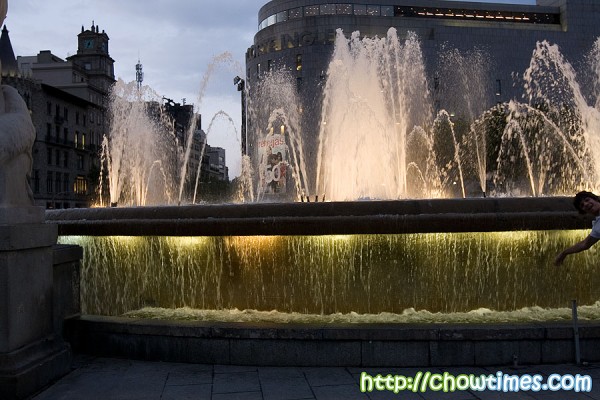 We returned to the hotel as the sun set.  We had our dinner, our first real Spanish dinner before heading back.  More about it in the next post.

End of day one in Spain.