This is like a consolation prize for not getting a table at El Bulli.  This is Plan B for fine cuisine while we are in Barcelona.

We found Alkimia from researching on Chowhound.  We wanted to really go to Cinc Sentits as our first choice but they were closed.  Both were excellent new wave restaurants.

Suanne finally got her glasses fixed.  We were at around Sagrada Familia because there is where Alkimia is located.  We found an optometrist on the way.

You know, Suanne always pushed me to do all the Spanish talking for her but this time (he he he) I told her I am not going to do that for her.  It’s her glasses and if she wants it fixed, she needs to do it herself.  Gosh, she hates me.  But she did well.  The optometrist does not speak English but he knows the problem right off.  He refused payment too even though we offered to pay.  I wished we had something to give him for his kindness.  The only thing we had on ourselves is an Angus Third Pounder coupon, good only in the US.  So Suanne said the FIRST official Spanish word communicating with a Spaniard … Gracias!  Oh, I love to see her all stressed out.  She hates me alright. 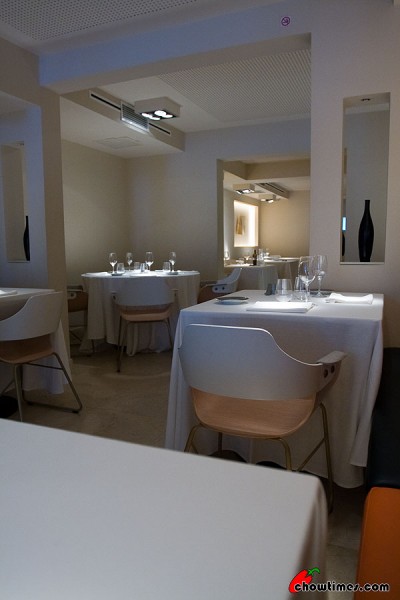 Our reservation was for noon but we were there about 30 minutes early.  They were just setting up but were kind enough to let us in and have a table.  We were the only customer there at that time which is technically still breakfast time in Spain!

The interior is awashed in white.  Very minimalistic.  Very white.  I corrected the white balance of the picture above but the interior had a very pleasant lighting.

You know what we love best about Alkimia?  That it is strictly PROHIBIDOR FUMAR!!  No smoking.  Oh yeah!

I like the lighting a lot.  It was as if they are strategically placed that the focus is on the food and nothing else.

As expected, service was excellent.  Very attentive, respectful and anticipative, if there is such a word.  While Alkimia is a fine dining restaurant, they did not mind that we were in casuals and jeans.

I like their pepper and salt shakers.  It took a while for me to figure out which is salt and which is pepper.

The knife … see how it does not lie on the sides?  Alright, I am a sucker for details like this.

Their menu is huge, almost 2 feet long.  It’s not that it is extensive — just outrageously big.  The menu is actually simple.  Alkimia serves contemporary Catalana cuisine.

Only three to choose from:

We went with the Menu Alkimia.  As in most tasting menu, everyone at the table has to order the same menu.  We can’t have 1 order of Menu Alkimia and another for the Traditional Menu.  This is because of timing issues, I believe.

Our waitress can clearly see that we were documenting the meal.  I mean the camera is hard to not notice and Suanne has a note book (not notebook!) on her side.  We were surprised that the waitress went and print out a color menu for our reference. 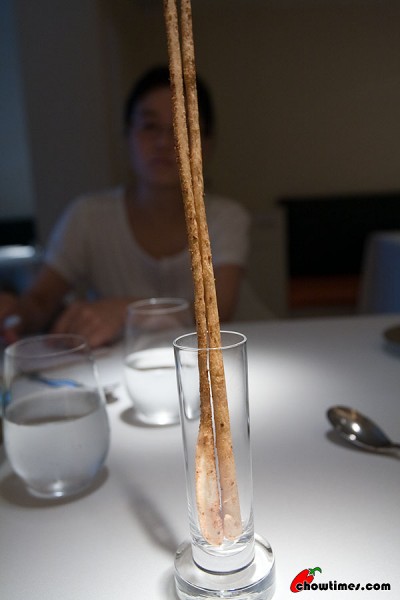 The breadstick was the first thing they brought to our table.  It sure was fun … must be at least two feet long that we had to stretch to reach the top. 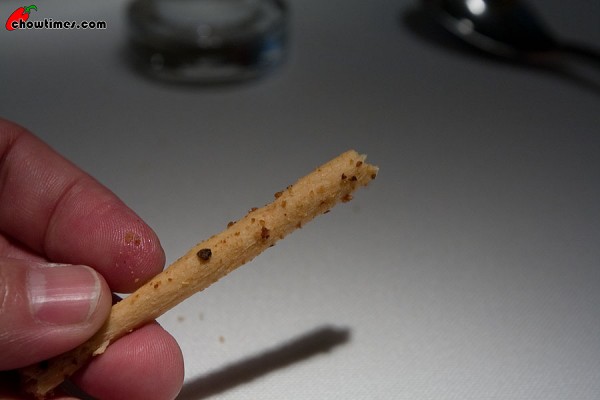 It was crispy and tasted like it was freshly made. 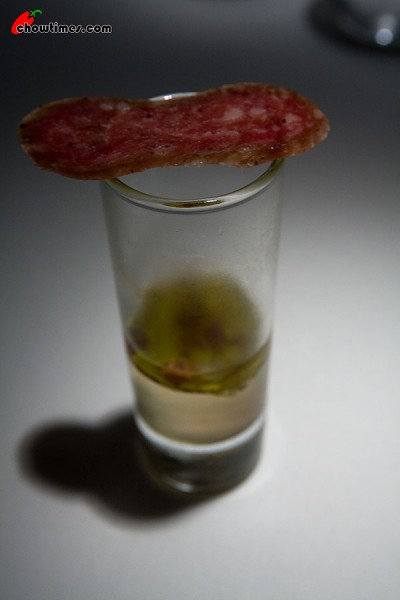 Next was the cured meat which came with …

… an oily drink with some very crusty bread crumbs in it.  We were told to pop the cured meat and the “drink” all at once.  It has a very unique combination of taste and texture.

We were still at the first appetizer course.  They call this Gorgonzola cheese, tomato, olive oil and balsamic vinegar.  Gorgonzola cheese is Italian style blue cheese but for this dish it is made into thick foam.

OK, this is the closest we had come so far in trying Ferran Adria’s creation.  It is the famed El Bulli master chef who first invented this style.  It is supposed to place more importance to flavour than to the other aspects of the food.

It was a very interesting start to the meal.  First course down … 11 more to come.

Before the mains started, the waitress came with two types of bread.  We had a choice of nut or white.  Suanne at first said she wanted the nut but when I asked for both, she quickly said she wanted both too.  Copy catter!

The bread was good.  It was so crusty hard on the outside that you could hear the crunch breaking it.  The insides were spongey soft.  I prefer the white ones but Suanne likes the nut flavoured ones.

The first main is called the Coca of Anchovy with Roasted Vegetables and Truffle Butter.

The Coca is the light thin bread at the bottom.  It was really crisp that it tasted more like a cracker than a bread.

Here is the other angle.  The anchovy is not as salty as the ones we had two days earlier.

Next was some kind of sashimi salad.  This is described on the menu as Amberjack marinated with summer tomatoes, cottage cheese, and nectar of strawberries.

The amberjack is locally known as lemon fish and has the same texture of tuna.  It is springy to the bite.

The above is called Pickled Oysters with Glazed Cheek, Sauteed Spinach.

The succulent oyster was warm with a creamy citrusy sauce.  Very nice.  The pork cheek was glazed with sake.  It tasted a lot like a piece of pork fat with a lining of lean meat — like the other way around where normally are used to lean meat with a lining of fat.  Very fatty and as expected quite icky!  After all it is like eating a big piece of fat.  Nice glaze though with the spinach. 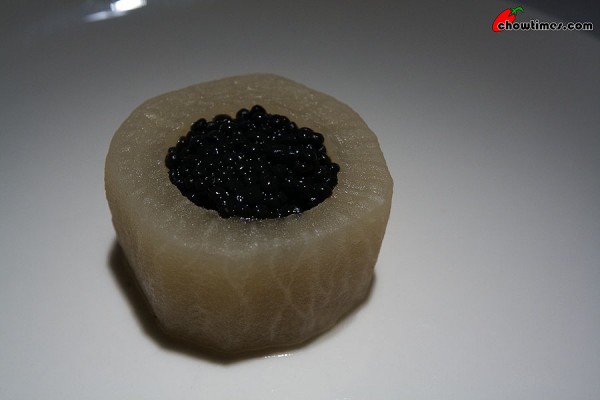 Next course is the Turnip Marrow with Hering Caviar.  Our waitress told us that this is a new dish introduced just the week before.  Underneath the caviar is pork fat.  This is an interesting combination of salty caviar with the texture of the turnip.  This dish is created as an exploration of texture, flavour and taste.  Simple ideas but really interesting combination. 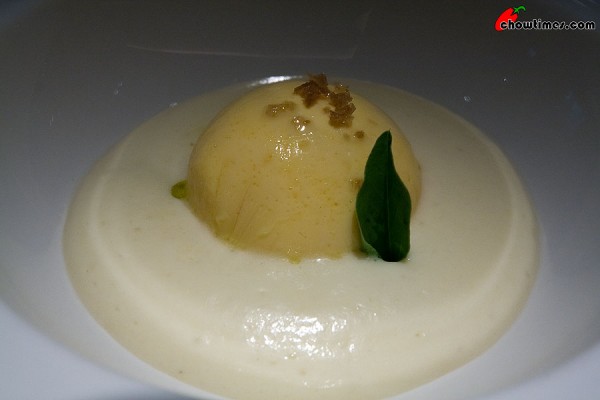 We enjoyed this next one called Egg Bonbon with Potatoes, Quince and Sausage.

It is eggs with two textures with the insides is of perfect liquidness that it is both liquid but still holds.  It is amazing how they did it so consistently.

Boiling eggs is the most commonly quoted example of the study of molecular gastronomy.  I want to understand more about this branch of culinary study — more about it later on.

The 2-texture egg “yolk” is surrounded on the sides with foamy potatoes, presented like it is egg whites.  The “yolk” is enhanced with the saltiness from the sausage bits.  Each components complemented each other very well.  Awesome.

Not wanting to waste the goodness, the bread came in handy.  Oh yeah, we wiped the plate real clean.  Our waitress chuckled when we asked her how we did as she came to collect the plates.  We like our waitress.  Although this place is fine dining and we were not so appropriately dressed, she was unpretentious and was glad we were having a great time.

Next up: The Iberian Pork with Cheese Fondue and Cherry.

Not so conventional combination here again — pork, cherry and cheese.  The cherry were topped with pickled onions.  We had the cherry first. 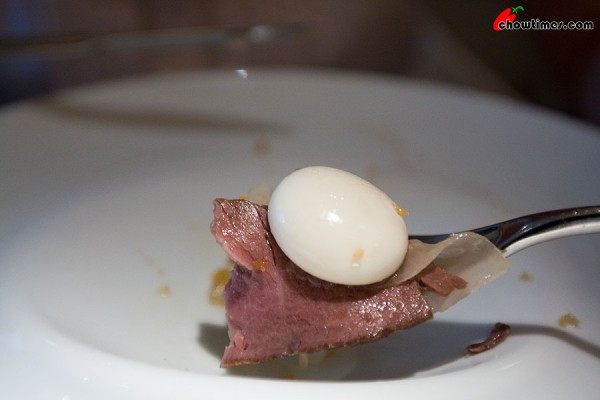 This next one is called “Prawns – a la mano”.  This is served in a really hot plate and we were warned to be careful.

A la mano … by the hands!  Our waitress said we should use our hands and if we were to use the cutleries to do it when she does not see us doing it.  We opted to eat this with our hands — not that we were afraid of being caught.

Our waitress told us that the prawn is boiled for exactly 3 minutes and then served on a plate of salt, herbs and lime rind.  The stuff it was sitting on imparted a hint of additional flavour to the fresh prawn.  It was one of the most perfectly cooked prawns we ever had.

The waitress, seeing that we were enjoying this, came by asking how it was.  I told her I had a complain … I said that they should serve like 5 prawns.  She was speechless, smiled and walked away.

The prawns came with a bowl of limey soup.

The limey soup was bland and tasted like … water!  I did not see the point to this side dish to the prawns.  😉

Next up was the Red Mullet with Seawater.  They pour some blue’ish water as they serve this.

The blue’ish liquid is actually fish soup and the blue color came from a blue flower and herbs.  Interesting … calling this seawater.

The red mullet was a prime piece of meat and fresh as expected.  Underneath it was a small piece of oyster too.  This is a pleasing looking dish with a nice play of colors — we normally do not see blue soup often. 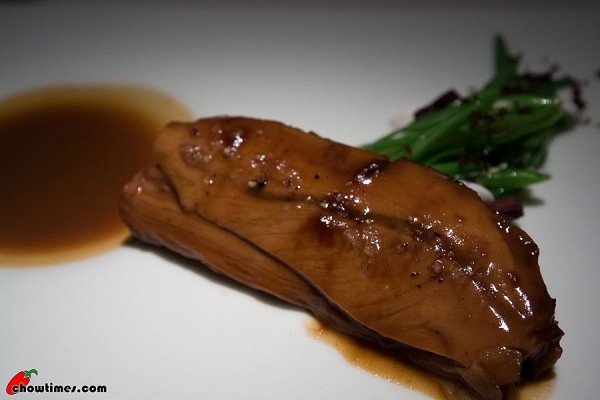 The Shin of Young Veal, Glazed Green Beans, Olives and Coconut was next.  This serving is substantially bigger than all preceding dishes … so it was a nice large cut of prime meat.  The meat was tender and we can even detect the distinct taste of sea salt and cracked peppers on top.  Veeeeery nice.

The supporting cast is the green beans.  Gosh, they choosed the freshest of ingredients here.  Very well done.

The thick sauce was not to be wasted and there are lots of it too.  We asked for more bread to mop up the remaining.  According to my calculation, there was about €2 worth of thick sauce from the overall price of the meal.  Nope … not to be wasted.  These are expensive gravy.  LOL! 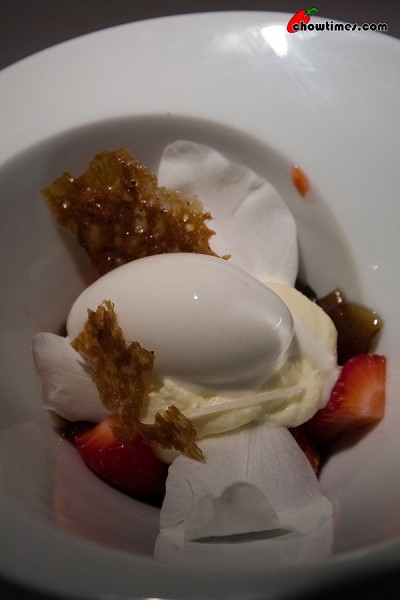 The meal was coming to an end … sigh.  #11 was the Almond Ice Cream with Citrus, Basil and Orange Blossom.

The egg like almond ice cream was lined with strawberries, a piece of bread and some SPICY jello like stuff at the bottom.  Really strange combination of taste.

The thing that looks like flower petals (maybe they were flower petals) tasted like wild ginger.  Hmmm … do you think this is supposed to be for decoration only and not to be eaten?  LOL!

Course #12 was Bitter Chocolate with raspberry Cream and Eucalyptus Ice Cream.  We were not enthusiastic over the combination of sweet, bitter and sour all together.

I thought it was all there is.  After all, we had already had all the items described on the Menu Alkimia.  But they surprised us with a bonus!  Oh goody.

It was an assortment dessert consisting of:

We particularly like the chocolate on a stick which contains minty liquid inside.  One bite and there is a rush of refreshing mint exploding in the mouth.  Very nice. 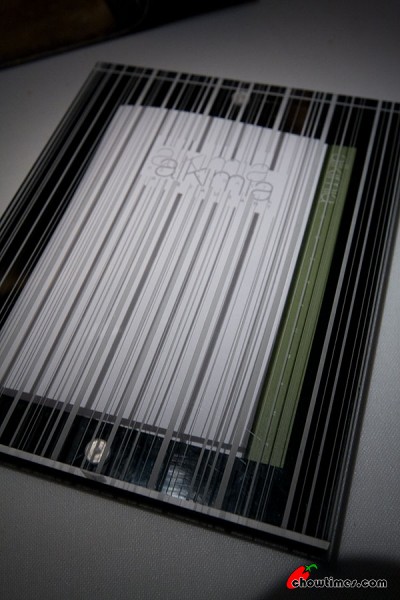 After all that, we were given the bill nicely enclosed in a acrylic holder.  Fumbled a bit on getting it opened.

The bill came to €157.83 which is about $250 Canadian.  We enjoyed this meal a lot although it was not cheap.  The place was absolutely packed by the time we left.  The meal took just slightly over 2 hours.

We had a great time.