No more Spain vacation blog entries for the next little while.  I will fast forward to the week we returned from Spain and for the rest of this week, I will go back to regular programming.  It is like Back To The Future kind of thing, OK?

Before we left for vacation, Rey lent us a great book about Spanish culinary.  It’s called Culinaria Spain — excellent book with lots of pictures of traditional Spanish food.  Our list of Spanish food to try were mostly made up of what we read.  Go on, click on the Amazon link on the left and take a look at the “First Pages” of this book.  He he he … you will see three of the things we blogged about … La Boqueria and Pa Amb Tomaquet.

That book is actually part of an excellent series of books.  If money grew on trees, I would go buy every book in the series. And I had to return that book to Rey. 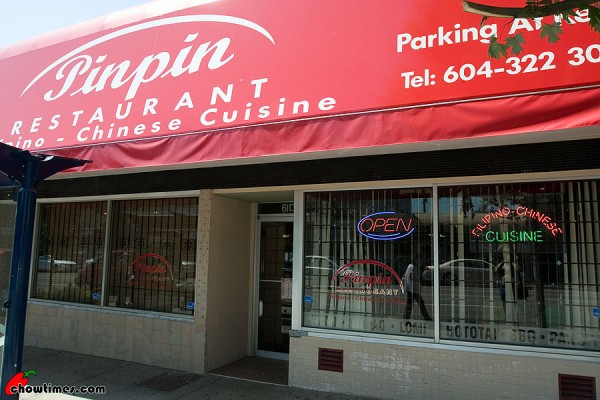 We decided to meet at Pinpin because we wanted Rey to tell us more about Filipino Cuisine, especially when we had just returned fresh from the vacation in Spain.  You see, Filipino Cuisine had a strong Spanish influence having been a Spanish colony for 400 years.

Pinpin is located on 6113 Fraser Street.  Rey told us that Pinpin is the name of the street in Manila’s Chinatown.  There is another Filipino restaurant in Richmond called Little Ongpin which is also named after a street in Manila’s Chinatown.  Both Pinpin and Little Ongpin are Chinese-Filipino restaurant.  Whew … that means that Rey will not be showing us Balut or Pork Blood Stew.

It appears that Pinpin had just recently expanded and went through a make over.  Rey told us that they used to be on one just shop lot.  The older section of the restaurant still have the cafe look but this newer section looks great. 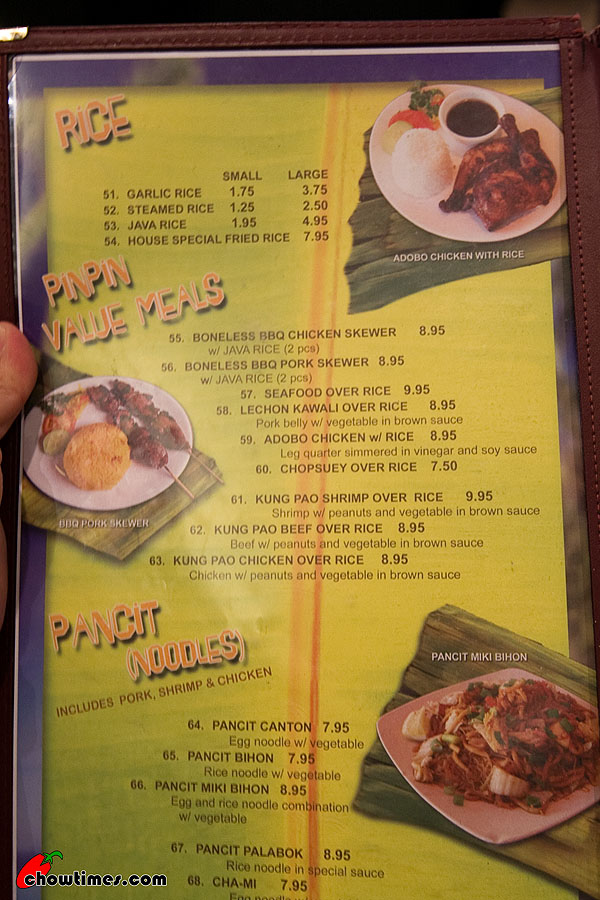 We did not even look at the menu and left it to the expert to order for us.  Having eaten with Rey before we sort of knew he would order a feast … and he did!  *clap* *clap* *clap*.

Crispy Pata — deep fried pig knuckle.  Meat lovers will surely love this.  I have to admit too … the Chinese Roast Pig (Siew Yook) is nowhere compared to the Filipino Crispy Pata.

What makes it great is the two steps in cooking … it is first boiled and then deep fried.  So what you get is a really soft tender moist meat with an unbelievably crispy skin.

We asked for a small portion for 3 people but still they gave us quite a serving.  This is $9.95.  If we come again, we will surely order this.

The dipping sauce that goes with the Crispy Pata is a mix of soya sauce, chili and garlic.   The next dish is absolutely amazing … 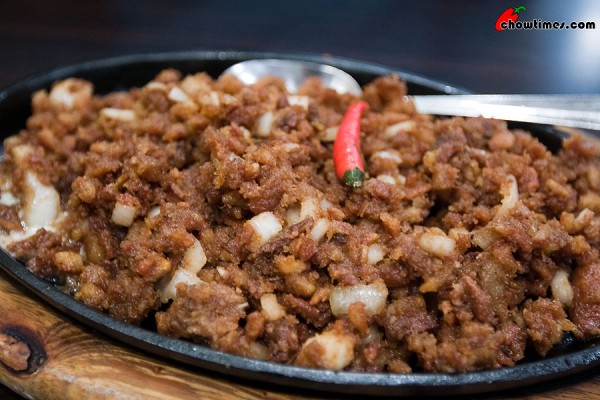 The above is called Sisig ($9.50).  If I tell you what it is made of, I think some of you less adventrous ones will not eat it.  So the trick here is to NOT ask what it is before you eat.  You need to eat it to see if you like it and then ask.

The Sisig is made of pig cheek and pig ears … all chopped up and served on a sizzling hot plate.  Rey told us that this is a specialty from a region in central Phillipines called Pampanga.  Well, that is also the region that the late Cory Aquino came from (she just passed away a couple of days prior).

So Sisig is made up entirely of the pig’s head.  No body meat is used.  It is very crispy and tasted a lot like fried pork fat.  I know this does not sound like a healthy dish but then you and I know very well that “healthy food not good; good food not healthy”.  Say you agree … please?

Bicol Express.  Deceptively mild but really spicy.  Rey said that the Bicol Express here is made milder than it is made traditionally in the Phillipines.  Over in Pinpin, this dish is only 20% pepper but back where this came from, it is made up of 50%-70% chopped pepper.

This dish is named after the region of Bicol located south of Manila.  Bicol is the only region in that country that eat spicy food.  Filipino Cuisine does not use a lot of spices.

The sauce is enriched by the use of coconut milk (called gata in Tagalog).  $8.  Well … I don’t know about Suanne but personally for me, my brain find it hard to equate spiciness with the color of the sauce.  It tastes great for sure but I would prefer this in yellow or red.  LOL!

This next one has a long name.  It is called Kaldereta … or Goat Stew in English.  This is a regional specialty of northern Phillipines … Marcos’ region.  I am not biased … but between the specialty from Aquino’s region and Marcos’, Aquino’s Sisig win hands down.  The Sisig ($9.50) is also cheaper than Kaldaretao ($12.95).

Gosh, what am I talking about?

Aaaaanyway.  The sauce is made from tomato, onion, cheese and bell peppers.  The goat meat is boney.  Goat meat is always boney.  This dish has a Spanish influence.  Was this good?  Hmmm … I much prefer the Sisig and Crispy Pata.

Having just returned from Spain where we had quite a lot of marvelous Leche Flan, we could not pass on this dessert.  This however tasted a lot more denser and smoother than those we had in Spain (which is lighter but coarser).  $3.95.  Wonderful dessert that one should not miss.

Total came up to just over $50 before tips.  With this meal over with, Suanne and I are one more step closer to doing the ultimate in Filipino cuisine — Balut and Pork Blood Stew.  God have mercy on us!