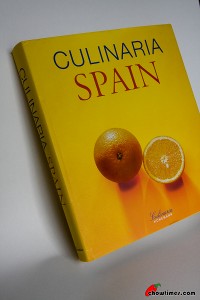 The thing we enjoy most in blogging is getting to know people. We had made a lot of friends over the years through this blog.

Some of you guys may remember this book on the left.

When we blogged about Pinpin right after our Spain vacation, we also mentioned the Culinaria Spain book which we enjoyed reading. It is the book we used as a reference in planning our gastronomic vacation in Spain. Rey was kind enough to loan us the book and we mentioned that we returned it to him.

Well … Kan-Man, who was a silent reader of Chowtimes until recently, wrote to us saying that he had the same book. He asked if we wanted it before he donates it to the library.

As much as we were reluctant to accept it, Kan-Man was kind enough to insist that we take it, given that I mentioned I enjoyed this book. This book that Kan-Man gave us is in hardcover. 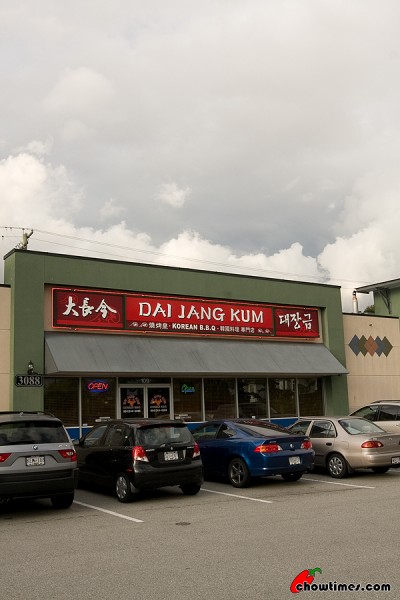 We made arrangements to meet up and have dinner with his young family. We always enjoy meeting up with our blog’s readers.

We went to Dai Jang Kum. Dai Jang Kum is located on Bridgeport at the intersection with St Edwards Drive. It is on the same place as The Bricks.  The restaurant is owned and operated by Koreans. So it is as authentic Korean as it gets. 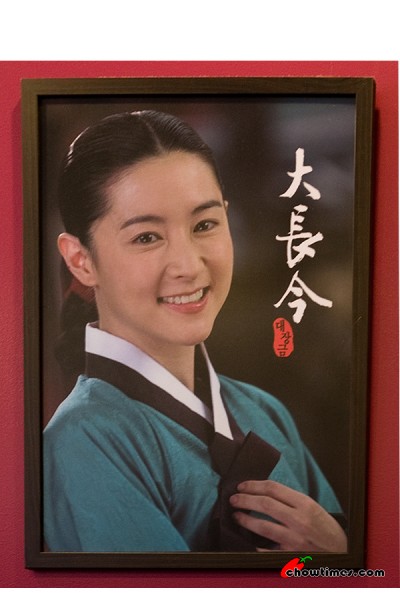 Dai Jang Kum is named after the main character of the popular Korean period drama called Dae Jung Geum. The pictures of the Jung Geum actress adrons on the walls. I am not sure why the name got spelt as Dai Jung Kum. Maybe it is because it is spelt phonetically according to Chinese characters.

Have any one watched the TV series before? It is a series based on Korean history of a girl named Jung Geum who rose from the imperial kitchen to become the emperor’s personal physician. I heard that in the TV series there were always a part where they show Korean cuisine.

[youtube https://www.youtube.com/watch?v=_92j9P7ja3k]
Here is a youtube of what I mean. The above is 9 minutes and is a series of several. Check it out … you might be as mesmerized as I was. 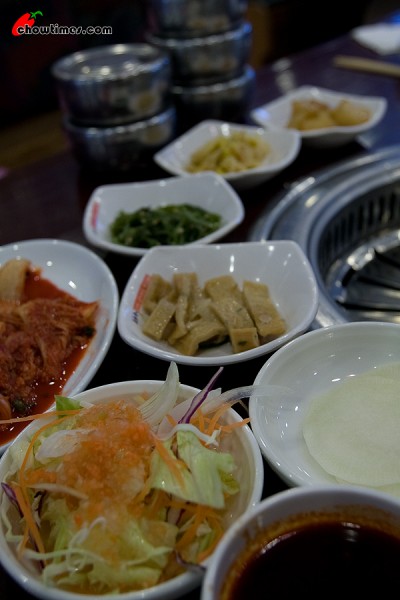 Unfortunately what we had did not come close to what is on the youtube video. LOL! 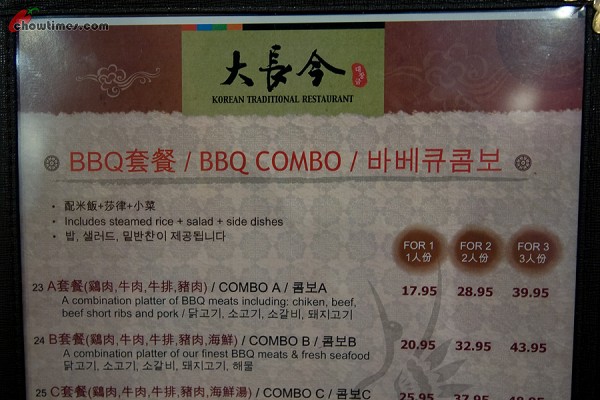 However, like a feast that Korean cuisine is used to, we were served 8 types of Banchans (Kimchee, potatoes, salad, seaweed, daikon, beancurd, soy bean sprout, and eggplant).

Kan-Man made the order mostly since he had been here several times before and is familiar with the menu. Dai Jung Kum’s menu is large but generally has about the same items that you will find in most Korean restaurants.

There were two families dining and so we had a 2-person BBQ Combo, 2-person hot pot, a pancake, and oxtail & knee bone soup. Oh, we also had Chicken Fried Rice for our boys. 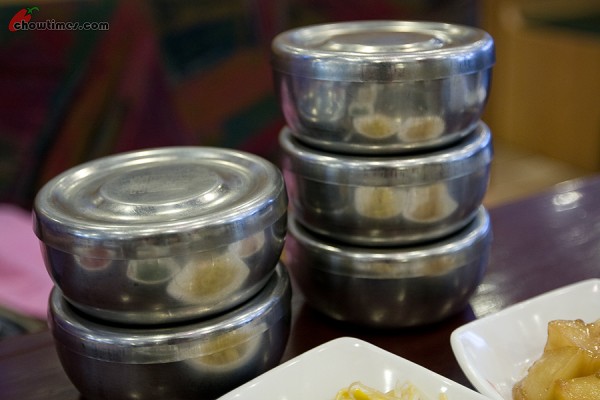 The meal came with five bowls of rice which I think came with some of the food we ordered. The metal bowls are hot from the steamed rice.

Did I tell you this before? Unlike Chinese and Japanese, Koreans do not lift the bowls from the table when they eat. So it is OK then that they serve rice in a metal bowl.

We also had three bowls of soup which came with something. Again, I am not sure what they are for. 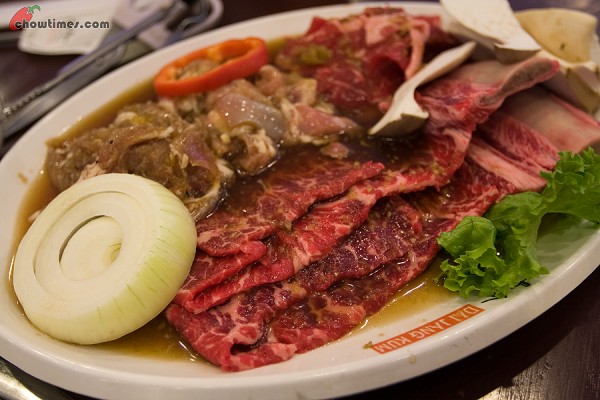 The above is BBQ Combo A which is a combination platter of BBQ meats including chicken, beef, beef short ribs and pork. We had the order for 2 person which costs $29. 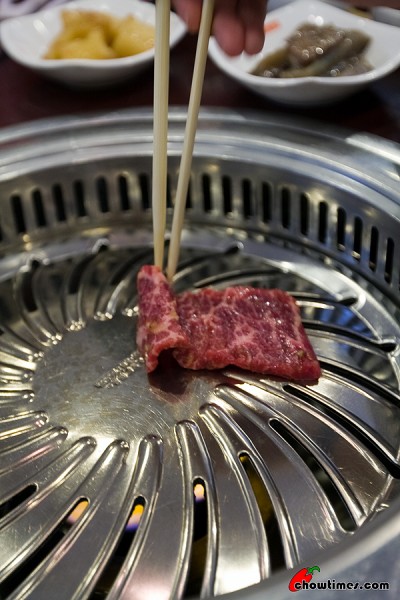 We BBQ the meats on the table grill. One thing that puzzles me was how clean the grill is. By the time we are done, the whole surface was charred. I wonder what their secret is cleaning the grill. 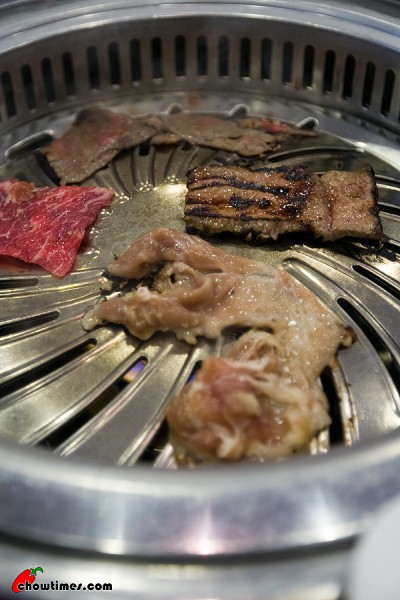 The BBQ was great. Actually I felt it was much better than the ones I had in Cho Sun (but the ones in Meok Ja Gol is still the best). It was really moist and the meat of good quality too.

But it was a lot of work, I must say. One person had to tend to the BBQ all the time. 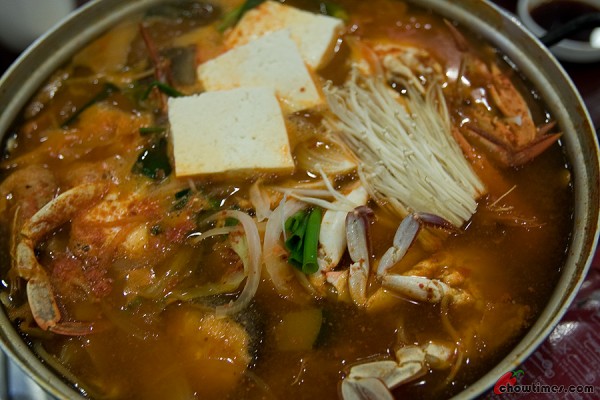 The Seafood Hot Pot is the most expensive of all that we ordered. The above is for 2 people and costs $36.

It was utter disappointment. The seafood did not taste fresh and it is so small. There are hardly any meat in the crab and the prawns. I hardly noticed the squid. At least there are respectable sizes of cod fish and mussels. The soup too was to mushed up and is loaded with too much bean sprout. We did not eat this much even though I made it a point to pick on the minuscule meat from the crab so as not to waste it. 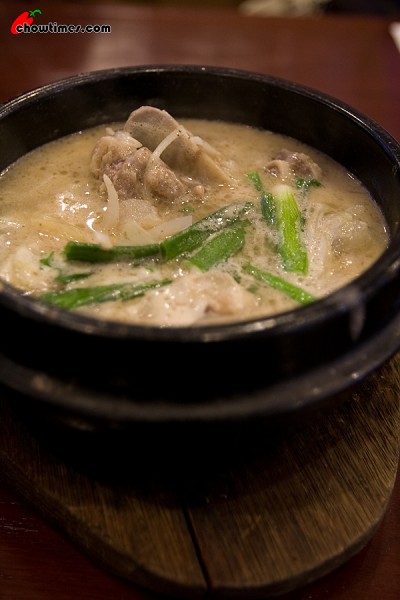 Of late I had been trying to understand why it is that any meat with bones tastes better. So when I saw that they had a mini poster of the Oxtail and Knee Bone Soup, we ordered that.  The soup is rich and delicious. 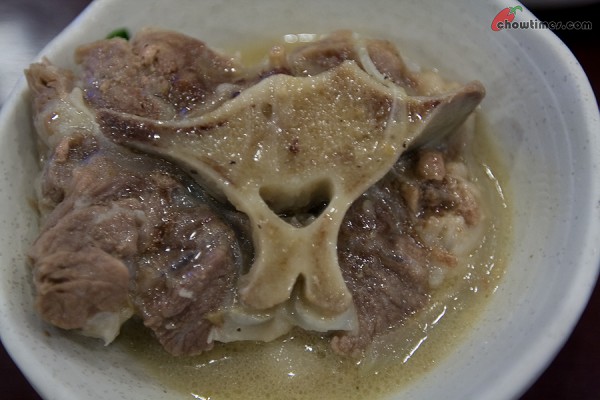 There were quite a bit of large pieces of oxtail. There were also tendons. Delicious. This one is $11. 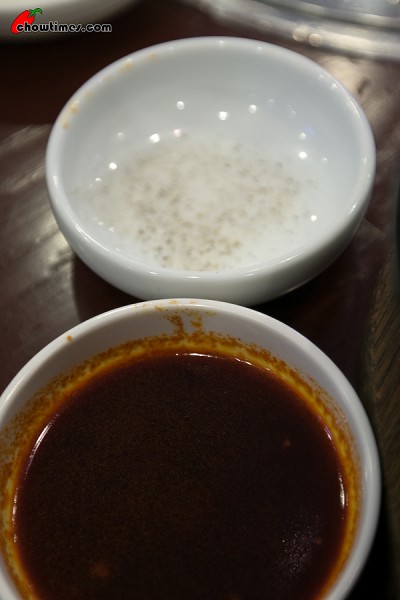 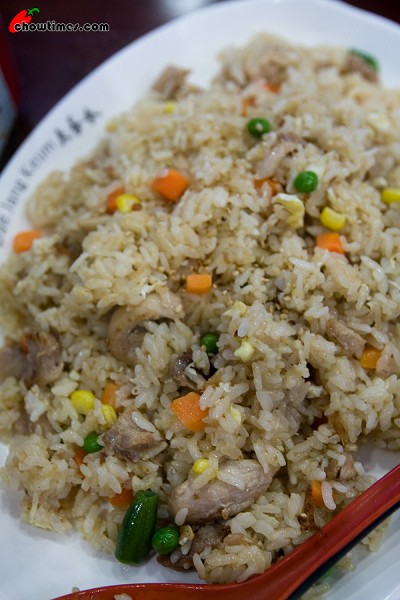 Who do you think ordered the Fried Rice? The Chicken Fried Rice is $9. The boys reported that the chicken was hard and the fried rice is just so-so. They are experts in fried rice, trust me. If they said it is so-so, it IS so-so. 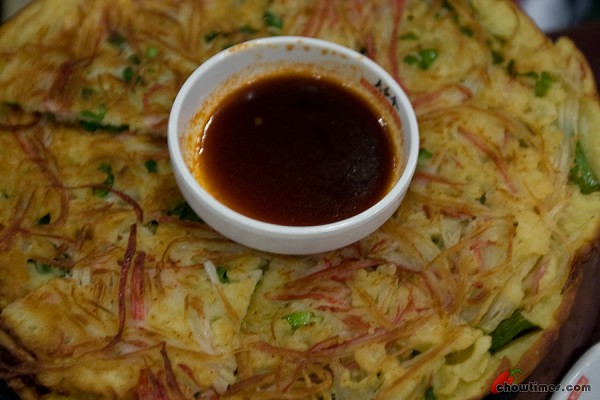 Seafood Pancake was OK. I felt it is expensive at $16. It looked nice doesn’t it? It was dryish. 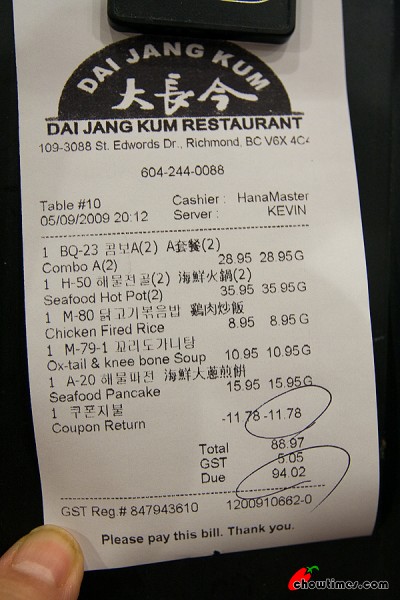 We over ordered for sure as we had some of the food to-go. 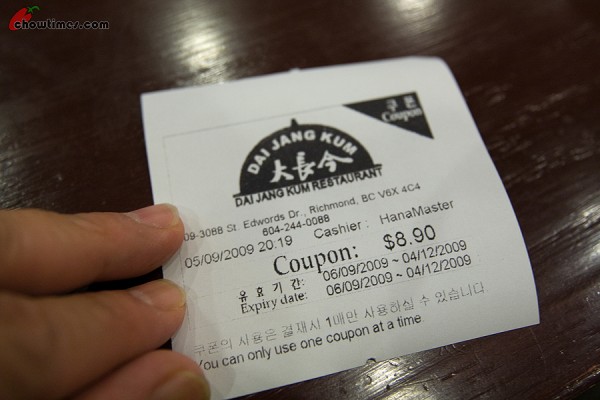 We also got a coupon for 10% of the net bill. It has a validity period of 2 months. 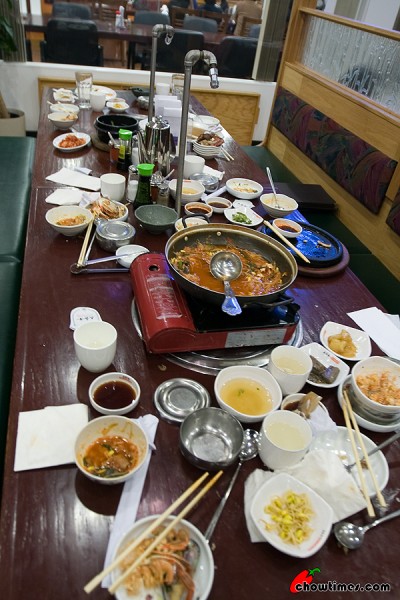 We enjoyed the company more than the food. We ended up spending a lot of time here.

So Kan-Man, thanks for the Culinaria Spain book again — it is greatly appreciated by Suanne and I. It was a pleasure meeting you and your family. We should do this again sometime!

Zen Fine Chinese Cuisine Opened — Want To Join Suanne and I for Dinner?