This is the continuation of the Tasting Menu in La Alqueria. Yesterday, I blogged about the first 4 of 12 courses. Following the first 4 snacks and tapas courses, the next five courses are called simply dishes. This is considered the mains. 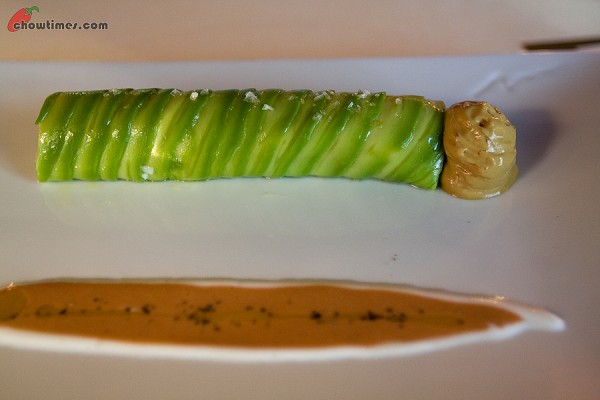 The 1st Dish is called the Avocado Cannelloni with Crab and Pumpkin Seed Oil Cream. 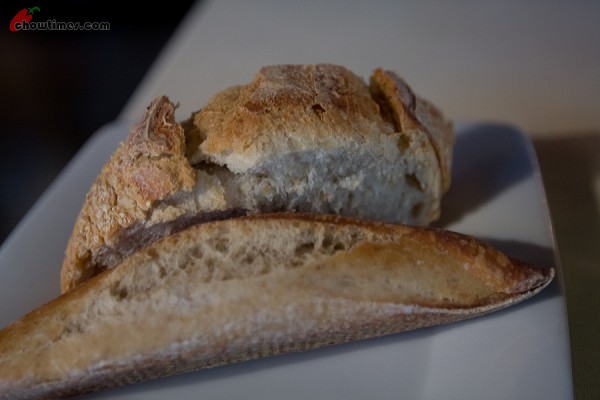 They brought the bread as they start the Dish courses. We had a choice of three bread, all warm. Suanne is so modest. When they brought it, she just took one. For me, I told them I wanted one of each. Guess what. Just as our server was about to leave she quickly said she wants the others too. We love the bread.

I had always thought that elBulli’s dishes are small. Some of them are as small as just a spoonful. So, it was a surprise that the Dishes are full mains.

It looked too pretty to eat. It does remind us of … avocado wrapped sushis that we had seen in Vancouver.

This is full of smoothness, creamy-ness and buttery-ness. How do you like my description? LOL! They are simply marvelous. I remember we savouring EVERY bite. 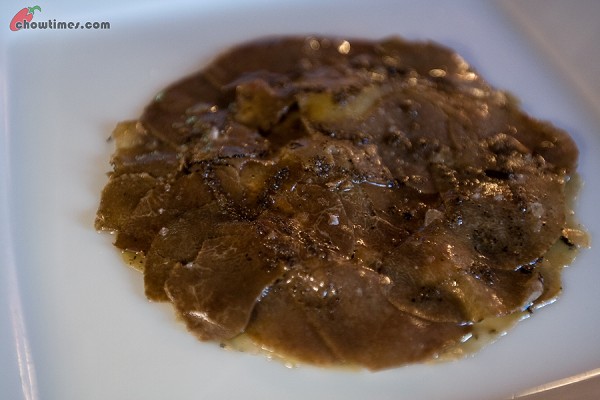 Dish #2 is Giant Truffle Raviolli with Carbonara Sauce. We had never had truffles before. As you know, truffles are highly prized in Spain and France’s kitchens. Giant truffles are rarer than others types of truffles and some can fetch hundreds of thousands of dollars. 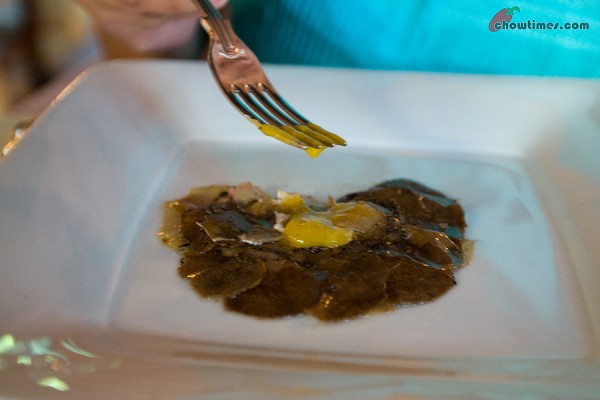 The carbonara sauce is topped with a small egg yolk which adds richness to the dish. There are the occasional bites of sea salt too giving a contrast to the richness and texture. There must have been something like 30 slices of truffles here. So we took quite a bit of time finishing this.

Dish #3 is called Gnochis of Polenta. After this three dishes, it seems to us like the theme for today is pasta. The top of the gnochis is drizzled with vanilla oil and sprinkle with coffee powder.

It has a lingering taste that stays for a while. Every bite is like a surprise despite the look of simplicity. The texture looks smooth but when we bite into it, it has decidedly rougher texture. 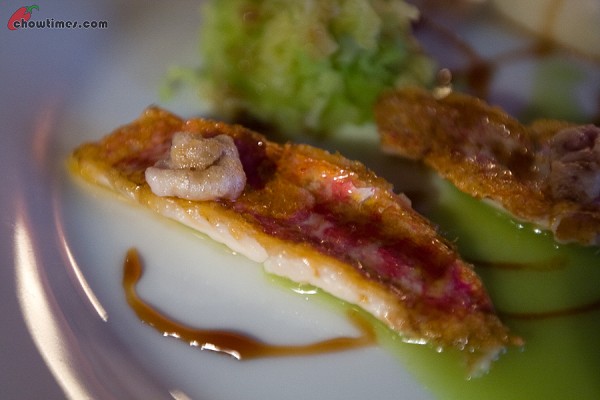 There are three pieces of mullet which is topped with a kind of snail. The top of the mullet was seared while the bottom remained smooth.

The cabbage salad, as simple as it seems, are nice. It looks like they only serve the thinner leave part of the cabbage. So it is soft. 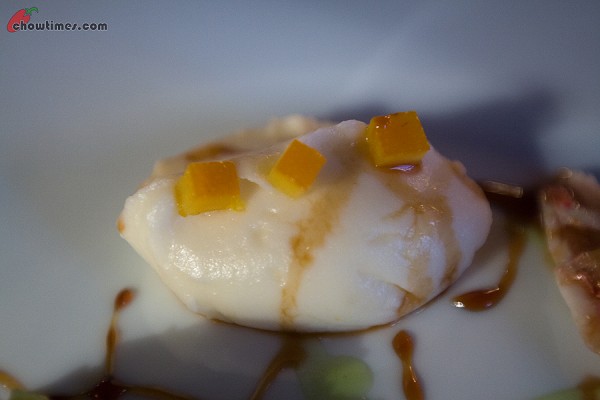 The potatoes ham puree tasted more like ham than anything. It has three cute little orange peel on top of it. 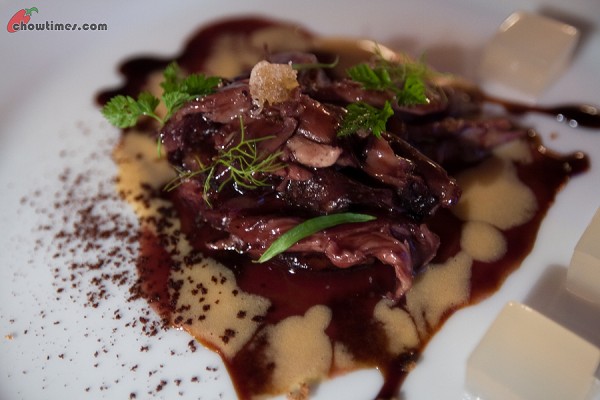 The last Dish is called the Rabbit Shoulder in “civet” sauce with Warm Apple Jelly. The civet sauce is meat juice with red wine reduction. It has heavy wine taste, kind of overpowering too. The meat is quite tough.

However, the sauce was surprisingly good with bread. It was sweet.

Oh, we had a lot of bread during the entire meal. The sauces were so good that we wipe the plates all clean with bread.

The apple jelly was sourish. It is just normal jelly to us. We find it kind of strange this is on this dish because we felt it does nothing much except to provide a contrast to the sweetness of this dish.

There is one dessert served. It is called Chocolate in Textures. On the side is mango sauce which provides “tanginess” to the dessert. The cool mouse was very smooth and resting on a simple brownie.

The chocolate leave is so thin that it’s transparent … and fragile.

To end the meal, we were served two morphings. The above is interesting. It is called White Chocolate English Bread. The “bread” is made of white chocolate mousse. They sprinkle it with yogurt powder just prior to serving and told us we must eat it quickly. On first contact in your mouth it will taste like bread but it will quickly dissolve. We left a small piece untouched and indeed it just melt within a couple of minutes. We felt rushed here. 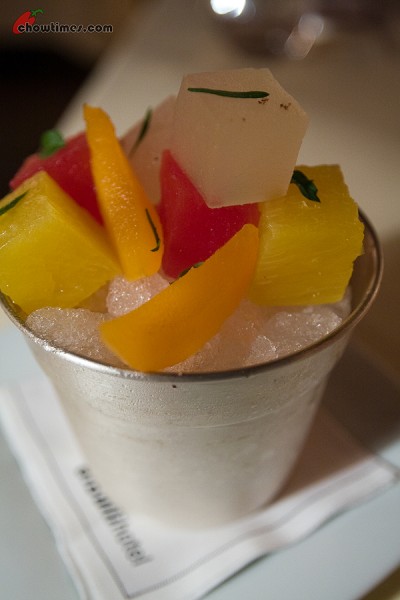 The final morphing is called the Cru Fruits. It was presented to us as watermelon, peach, pear and pineapple served in a flowerpot of crushed ice. 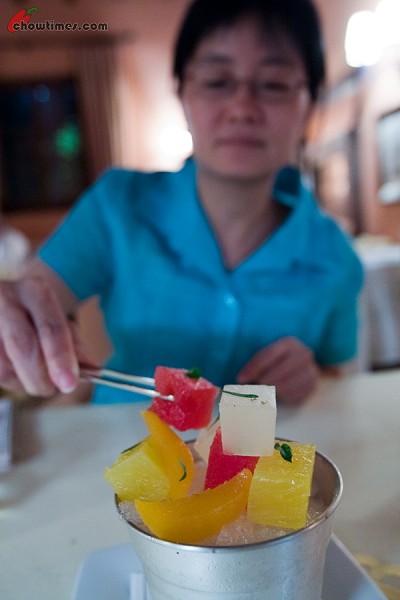 To eat this we used forceps and is to eat a different cube in turn. Anyone know what “cru” are? I asked our server and she couldn’t understand me. It looked freeze dried and has a minty taste to it. 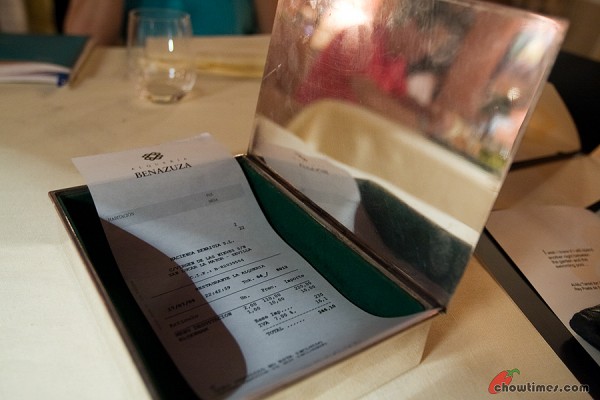 We enjoyed the meal and it was excellent in every way. In all we took over two hours. The only regret is the difficulty in speaking to our server. Otherwise we would have been able to learn a bit more about the food we had. We were asked if we wanted to adjourn to the pool for coffee. We declined because firstly it was late and we need to get back to Seville.

All the dishes were good with the exception of the rabbit. We still want to go to the real elBulli some day but for now, we had a taste of it.

We got the hotel to get us a taxi back to Seville. And to our surprise it was a limousine with the driver in a suit! Of course, right? This is a five star hotel and they do not call normal taxis. We looked at one another and said … well, if the ride in a normal taxi to here is already 53 euros, we thought this would be even more expensive. And this does not have meter in it.

Guess what. It turned out that the ride back to Seville in a limousine is just 40 euros. We were definitely ripped off by our taxi driver.

The limousine got caught in a traffic jam when we were about 1-2 km from our hotel. So instead of waiting we decided to just walk back. It seems that there is a religious procession going on. I have no idea what it is about.

This ends the series of our visit to Seville. Like in Barcelona, we experienced more than we expected. The Cathedral of Seville was a discovery, the bullfight was dramatic and at least we had tasted elBulli on our vacation.

We will take a break from blogging on vacation and go back to regular programming … recipes and restaurants!