Updated: 20th March 2011: This restaurant is closed and replaced by Szechuan Delicious Restaurant.”

Do you reckon that location is the most important aspect when opening a new restaurant?

There is something about this particular restaurant location on the strip mall across the No 3 Road from the Richmond Center. Located in the middle of this strip mall is always a Shanghainese restaurant. Over the ten years since we moved to Richmond, the restaurant operations changed hands a number of times.

Ten years ago, this shop lot was the original location of the Chen’s Shanghai Restaurant. They were quite a small family operation back then. Today they are one of the better Shanghainese restaurants in Richmond having won a number of awards recently.

At one point, there was another restaurant called Shanghai Wind. From what I heard, that restaurant too became successful and had to move out to a bigger and better location. Shanghai Wind became Shanghai Wonderful, which is another successful Shanghainese Restaurant in Richmond.

Up until the early part of this year, it was Da Hong Yun Shanghai Restaurant that operated here. Their food was good but we found it pricey, However, they had closed. Does anyone know what happened to them?

In this place today is yet another Shanghainese Restaurant. This one is called the Shanghai JJ Restaurant. They told us that they had already been opened for business for 8 months now. So I guess they are doing OK.

The place looked the same except for a fresh coat of paint. It does look cleaner.

As soon as we got seated they handed us their menu. We did not even look at it. We set it aside and instead …

… we walked to the wall where they had posted delicious looking pictures of their dishes. This is definitely the best way to order food, don’t you think?  As odd as it may feel to some of you, I made our order standing in front of the wall and pointing out what we wanted.

What I like is that many of their dishes are unique that you don’t normally find in other Chinese restaurants.

I can’t help but to compare them with the time when this place was Shanghai Wind (Shanghai Wonderful). Back then this small restaurant was absolutely packed and one had to wait a long time for a table. Shanghai JJ is quite full but they did not have people waiting for a table like when it was Shanghai Wind.

Their Xiao Long Bau is noticeably smaller than what we are used to. It is $4 for 6 pieces. The XLB is quite decent but it was disappointing that one of them was served broken. He he he … to us all pieces of the XLB must be served intact with the soup otherwise it is not good. That is like the litmus test for XLB.

BTW, I want to know what is the right Chinese word to describe ordering dishes. You know like ordering a few dishes communal style with a side of steamed rice? Suanne and I call it “chau choy” in Cantonese but I think there is a better word for it. What is it?

When we have four in the family out for dinner like this, we normally would order three different dishes to share. It would be made up of one soup, one meat and one veggie dish.

The Shanghai Style Soup with Assorted Food costs $13. It has … Shanghai Bok Choy, pork and even bamboo shoots. It came in a large pot with the soup still boiling when it was served. The soup was flavorful. We give this a thumbs up particularly for the large serving. We love Shanghainese soup but as much as we like it, Suanne had never made it at home.

Does anyone have a recipe for this simple looking soup? What is it that gives it the murkiness? 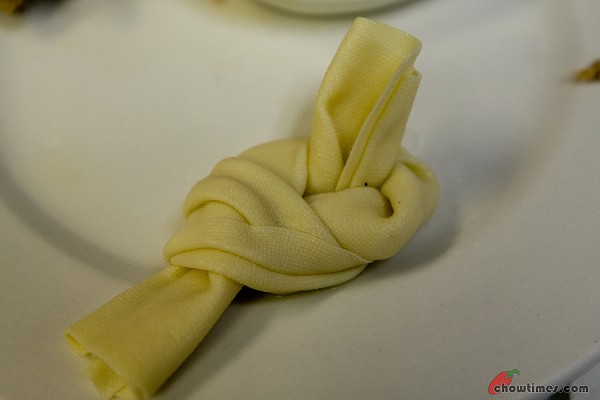 The soup also has this cute little thingy. We think it is bean curd sheets cut up and tied up in knots. Yes? No? 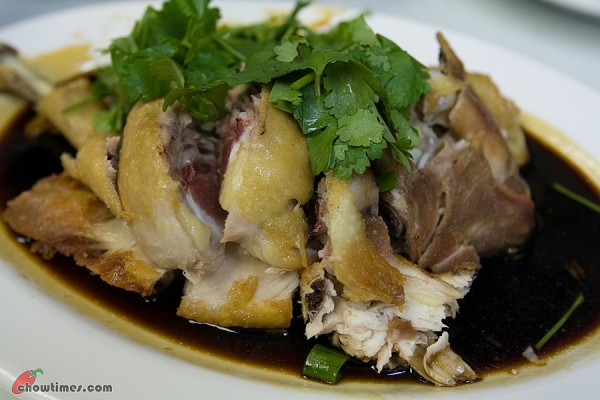 For the meat dish, we had the Fried Chicken with Shanghai Style Sauce ($12). This is excellent.

The chicken is deep fried that even the bones are crispy … and … yet at the same time the meat in the middle is tender and cooked just perfectly. Doing it this way is not easy and needs kungfu from a master chef. The chicken was good to bite on the crispy boney bits. The sauce is good balance of sweetness and vinegar. It is great drizzled over steamed rice. Yum … we like this. 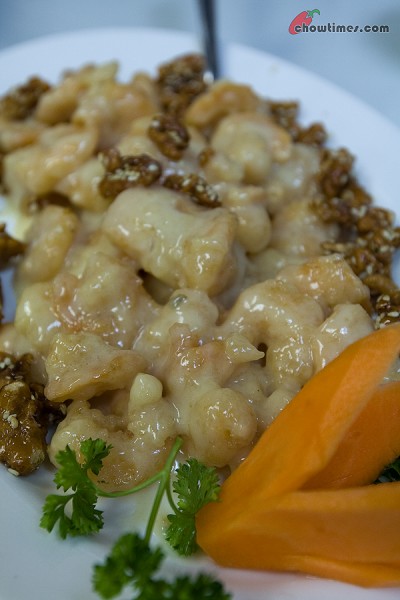 The Crispy Prawn with Salad Sauce costs $13. This is equally good too. The prawns were deep fried so much so that it has a crispy outer skin with soft meat under it. The prawn is then smothered with a sweet salad sauce and served with candied sesame walnut.

Between the three dishes, this is the best. They were all gone in no time … our boys gobbled them up. 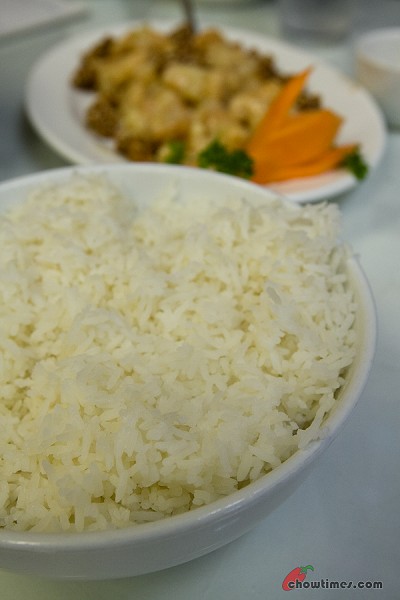 The rice came in a big bowl instead of in a bucket to keep it warm.

The total bill came up to just over $50 before tips. Their prices are just about average, not cheap but not excessively expensive. We enjoyed this meal and told ourselves to come back again to order the other dishes … off their wall! Only time will tell if they will go the success way of Chen’s and Shanghai Wonderful.

BTW, they accept cash only.