Updated: 4th April 2011: This restaurant is closed according to Urbanspoon.com.

The last time we had Japanese AYCE (all-you-can-eat) was 7 months ago. That was when we went to E-Bei.

As much as Nanzaro and Arkensen love Japanese sushi, the reason why we had not gone to one more often is because Suanne just doesn’t like raw fish, period. 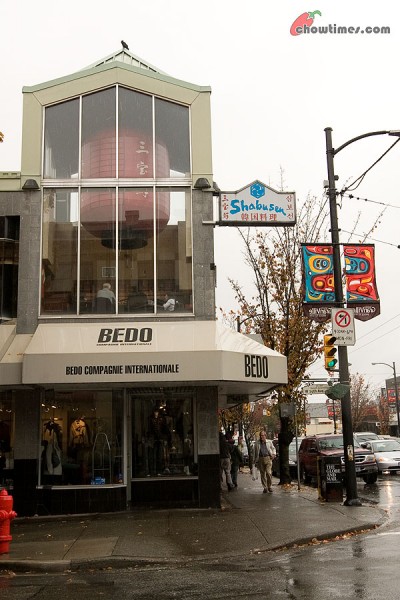 But Shabusen Yakiniku House is different. It is both a Japanese AYCE and a Korean BBQ AYCE.

There are two Shabusens in Vancouver. There is one in downtown Vancouver. We went to the other one on Granville.

In case you don’t know, the word Yakiniku means grilled meat in Japanese. 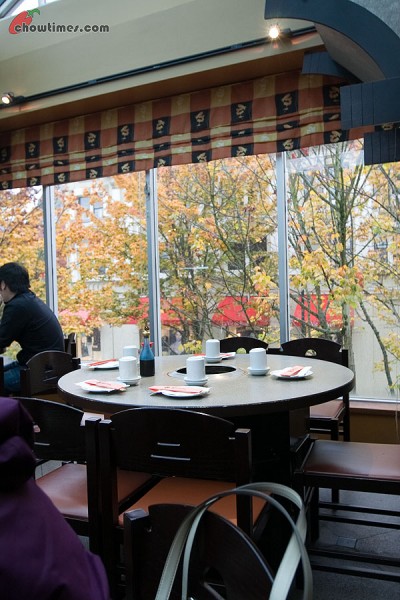 For an AYCE, Shabusen looks a lot posh and better than all the other AYCEs we had been to. The whole place is bright with lots of ceiling high windows and skylights. It was actually a beautiful day eating here despite the it being rainy the whole morning. The Fall colors looked so good at this time of the year. 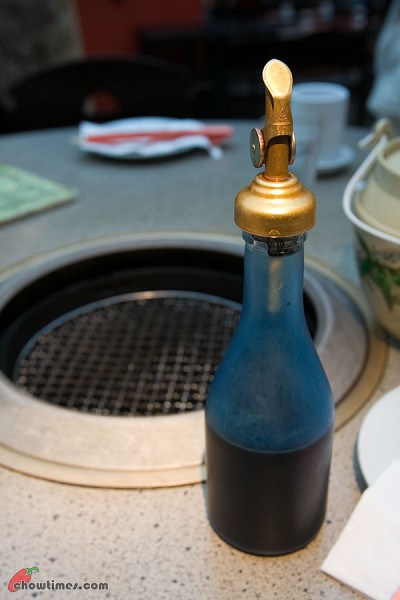 Every table had a gas grill in the center. That is for the Korean BBQ. See the bottle above? That is the BBQ sauce but really, we hardly need to use that because the meat were already very well marinated.

Service was kind of slow here. The waiters and waitresses seems to walk around with their eyes peeled to the ground all the time. It is as if they are afraid that if they get eye contact with the customer, they will have to do more work or something. It was so hard to get their attention when we wanted something from them. 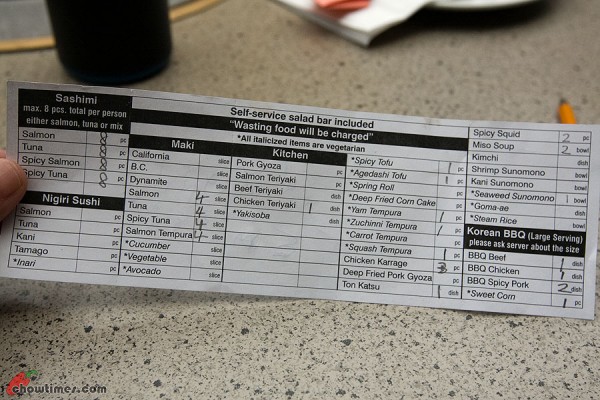 The selection at a glance looks a lot smaller than places like Kingsway Sushi and E-Bei. The above was our first round order where we max out our order of Sashimis. 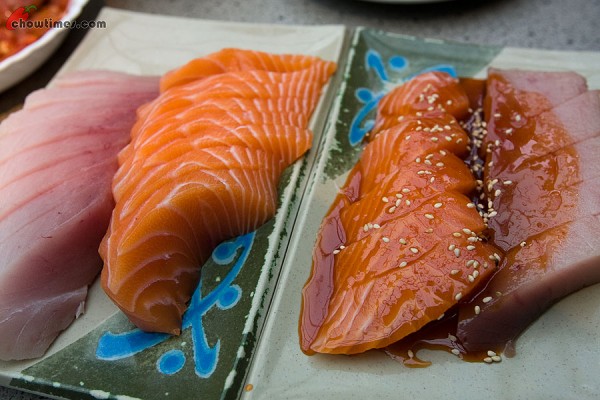 We left these 32 pieces to the boys. These alone kept them very happy. 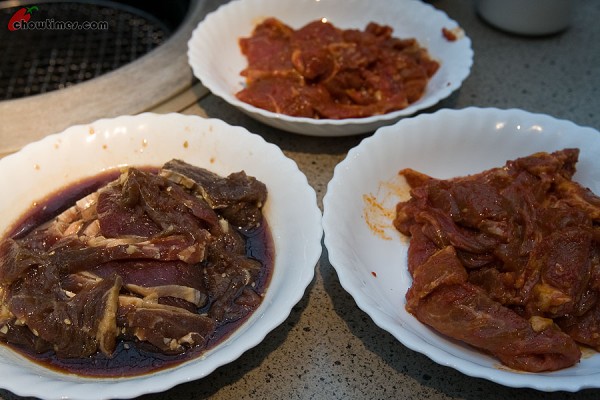 For Suanne and I, we were quite contended with the Korean BBQ. There are three choices … chicken, beef and pork.

In our greed, we ordered a total of EIGHT plates of BBQ meat. That was way too much and we had a difficult time finishing all of them. We did not feel good about wasting food. 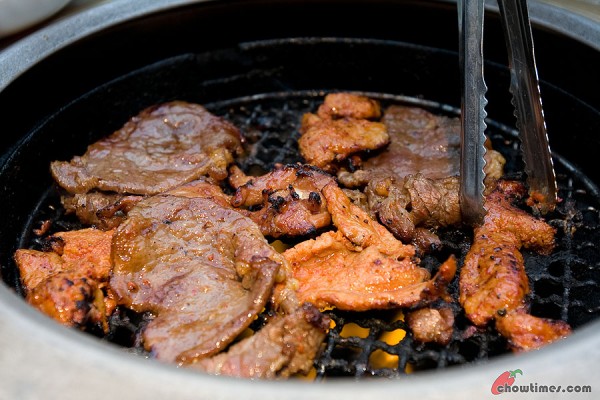 For once, I was the one who did all the cooking. Oh yeah, believe it or not [giving myself a pat on the back].

BBQ is a guy thing for some reason. Suanne was happy to let me do all the work while she enjoys my cooking.

Well, I must say that I did quite well. The meat was super … moist, tender and flavourful. To us, this is even better than the BBQ we had in Dai Jung Kum earlier. The meat here are thicker while the ones at Dai Jung Kum are much thinner and tears easily when the meat sticks to the grill. 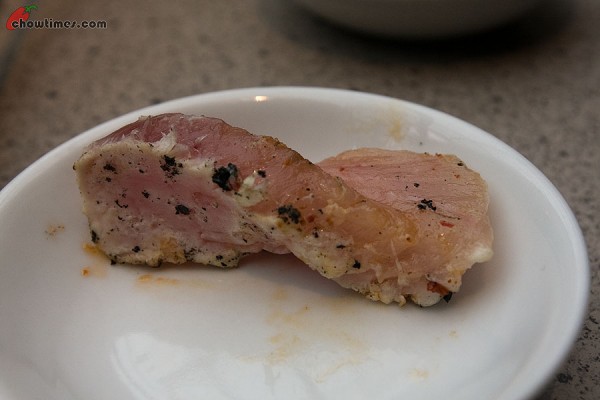 I even made seared tuna for the girl in our party who does not eat raw fish. LOL! 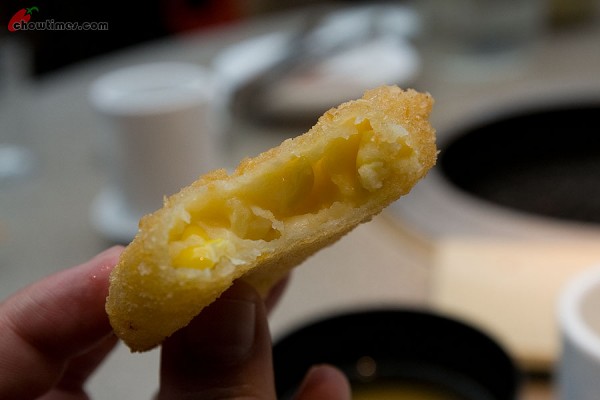 I want to call out this thing above called the Corn Croquet. It was really nice and sweet with some custard like filling and corn kernels. 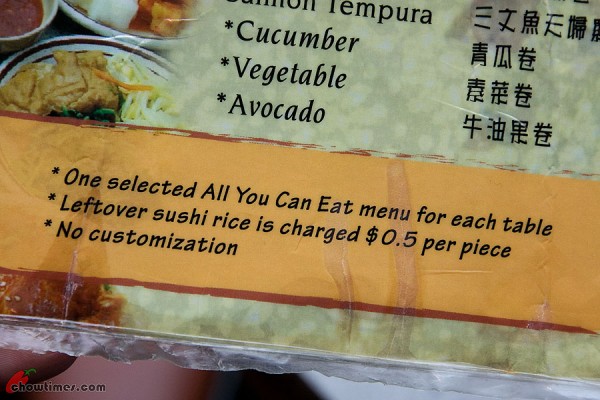 Look at the “leftover sushi rice” rule they have here. I guess they had enough of people ordering tons of sushis and just eating the fish. LOL!

Surprisingly Shabusen was not full on the Saturday afternoon we were there. We thought that maybe it was raining that afternoon.

Tags: All You Can Eat, Korean, Restaurant Review, Vancouver