Updated: 22nd Nov 2014; This restaurant is closed according to Urbanspoon.com.

Suanne and I told ourselves that we need to just give Mexican cuisine another try. Truth be told, our impression of Mexican food is of beans and mushed up food. I just don’t like beans personally.

So, a couple of weeks ago I happened to speak to Alejandra in the office about Mexican food and the fact that I dislike beans. She was quite livid that my whole impression of Mexican cuisine is just all wrong.

BTW, see her third recommendation above. Does anyone know which restaurant she is referring to?

So, Suanne and I went to El Mariachi for our Friday dinner. You know what we like about this place … the fact that it is so unknown and yet to the Mexican community, they are well known (or at least that’s what Alejandra told me). There were very little reviews found of this place.

Moreover, if you walk along the street, you will very likely not even know they existed. It is located upstairs with just a banner that announces their existence.

If you walk along Hastings in Burnaby (between Boundary and Ingleton Ave), the one thing that might catch your attention is the sandwich board just outside their entrance.

What greeted us was a surprise. It was more than what we expected. The whole place was colourful and bright. They were playing very catchy Mexican songs. So it was just perfect having just stepped out of a blustery and wet day — warm decor, warm colors and warm welcome.

Alejandra told me that they have live music but it’s only on the weekend. Actually, the place was quiet for the Friday night. It was just us and another party who dined there.

The waiter was a cheerful guy. For drinks we asked for something Mexican. He recommended a Mexican pop for Suanne saying that the Jarritos is Mexico’s national soft drink which uses the nation’s favourite fruit flavours. Jarritos is to Mexico what Coca-cola is to the US. The drink is not very fizzy and not too sweet.

For me, I had the Negra Modelo. This dark beer came in an unique fat bottle. 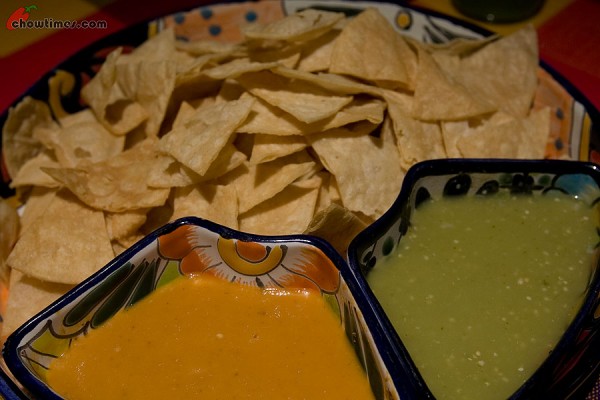 Seeing that we were asking a lot of questions about Mexican food, our waiter explained that in almost all Mexican restaurants, they provide free appetizer of chips. They came with a green salsa and a red salsa which was more orangey than red.

The salsas was not spicy with the red one a tad more spicier. Suanne prefers the green salsa better because it has a sourness in it. The corn chips were great. Suanne can’t stop picking one up after another … something she regretted doing when the real food came.

The salsas is the watery kind and not the chunky ones we are used to.

For our first course we wanted to order Sopa Azteca as what Alejandra recommended. They said they don’t have the Sopa Azteca but recommended something like it … Sopa Tortilla. This is super awesome. Not only is it presented in such a delightful manner, it tasted great.

It is tomato’ish and lightly spicy. Just the kind of thing we need for a cold day. In this soup are thinly fried tortilla, cheese cubes, avocado and garnished with cream. The crispy fried tortilla gives the soup a  whole different texture and the cheese provides that tinge of saltiness to the flavour.

It was a great start.

Alejandra recommended that we get a Carne a la Tampiquena ($16). Here they just called it Tampiquena … am not sure what that means. This is primarily beef steak strips. 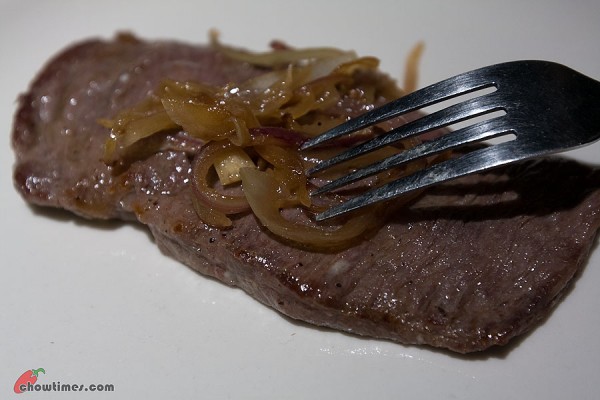 There were two pieces of beef steaks, not too thick. It was quite good and juicy as we expected but we felt it was not a really good cut. We like the caramelized onions on the top and …

… hidden underneath the beef is this mix of sauteed poblano peppers, onions, and corns with cream cheese. I like this particularly. 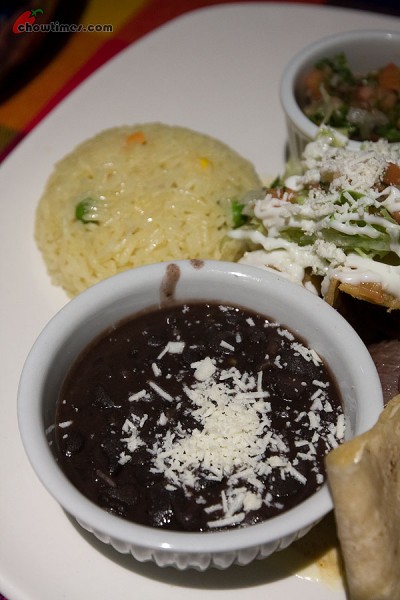 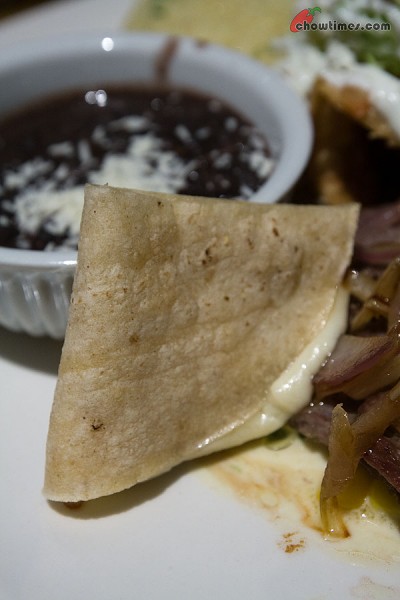 There are more. Clockwise from top left … we both hate the black bean. We took a bite and left it untouched after that. It’s just us — never liked beans and the color too does not look appetizing to us.

The rice was really nice and fragrant. Suanne thinks this is called Spanish Rice which is something she had made before in her Richmond Community Kitchen.

Bottom right is the Cheese Quesadilla. I still cannot differentiate the difference between quesadilla and a tortilla. This one is nothing fancy.

The last side dish is the Mexican Salsa. It was simply one of the best we had and I like the way the cilantro gives the salsa that twist in taste. It was cool and fresh.

We wanted to get the Tacos de Birria as recommended by Alejandra but they don’t serve this here. They said that there are not many places that serves this because it is complex to make. Instead he recommended something complex that they have … and that is the Pollo con Mole ($11). In English it is Chicken with Mole Sauce.

Suanne also made the Chicken Mole before in her RCK. Here is the recipe but the mole she used are canned ones.

The star of this dish is not the chicken. It is the mole sauce. It is thick with very complex flavours. The waiter told us this takes 35 different types of ingredients to make. Not wanted to waste the delicious mole sauce, we used that as a dip.

We felt the spiciness of the mole is different. While most spiciness attacks the tongue and the lips, the mole does not do that but instead we felt the heat at the throat. Did we both imagine that? LOL! We are asking you because when we told the waiter, he looked at us kind of puzzled.

Maybe we are imagining it. 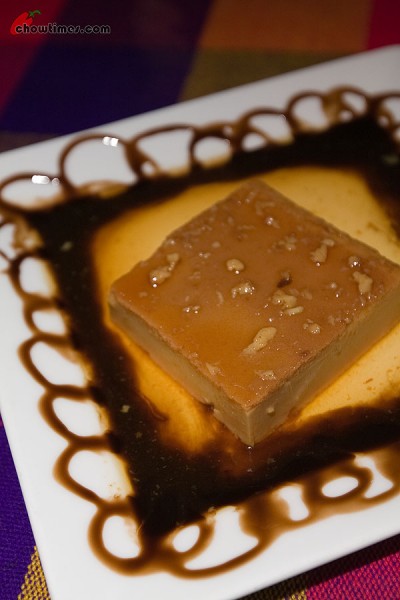 Suanne was already full. So was I.

Suanne said she did not want dessert but it is so easy to change her mind when I read the dessert choices to her. She reluctantly agreed to get it only if I eat 90% of it. She said she just wanted a bite to taste. 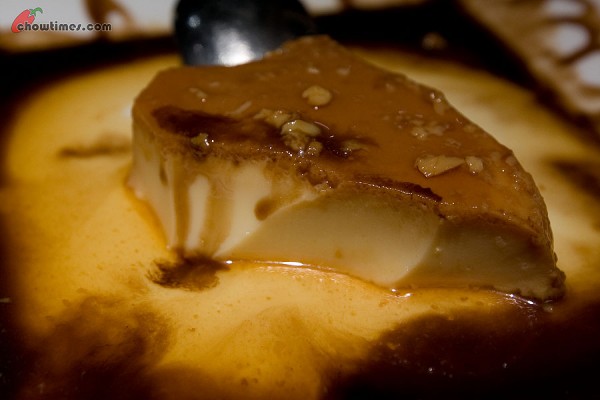 So I picked the $5 Mexican Flan. It is dense and has a consistent texture … really super rich and super nice. 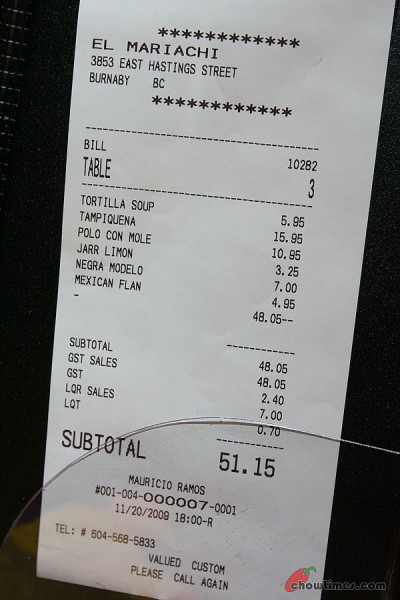 Awesome meal. It is a great find if you ask me (not that I had eaten in many Mexican restaurants!). We like the food, our waiter, the decor and the music. The only thing that we can’t understand is why it was so quiet that Friday night. Maybe it was cold and blustery that day.

Here … check out their menu.