When Suanne and I first started blogging almost 4 years ago, I remember there were about five food blogs. Today there are so many that I had no time to read all of them, let alone get to know each one personally even though I would love to do that.

Among all the food bloggers, in our eyes there is one who had managed to do something that no other food bloggers had ever done (and will very probably never achieve) … and that is to land an interview on the morning news on TV. You probably know him … Matt of VancouverSlop.com.

Matt and I met over dinner last week after work. Our choice of location is Toshi Sushi which is one of the most popular Japanese sushi restaurant in Vancouver.

So we decided to meet at 15 minutes before they open their doors to get a table. Even at that time, there were already a line despite it raining and there were hardly any cover from the elements. Yeah, we waited in the rain.

Toshi Sushi is very popular. It is so popular that they do not think twice about imposing rules on their customers. They discourage groups larger than six … can you believe any restaurant saying that? It seems like they are so popular that they do not have to think twice about offending a customer because there are more than they can handle anyway.

Since Matt and I were second in line that night, we did not have to wait for a table. But for those who could not get a table in the first sitting, you place your name on the name list and wait patiently. I have read that waits could be an hour, or more.

One particular “NO EXCUSES!” (in caps and exclamation mark) rule that you need to observe is that EVERYONE in your party MUST be present before they seat you. There was one particular review I read that someone put in 4 person to the party. When they were called, one person in the party were running late. So the party of three got seated and when the waitress found that there were only three, the waitress asked them to vacate the table and threw them back to the bottom of the list … and that is despite the customer offering to order for FOUR people. Can you imagine that?

These kind of stories makes a legend of a restaurant. That reminds of the famous Soup Nazi scenes from Seinfeld.

So be warned OK? When they said “NO EXECUSES!”, they mean it. It’s in black and white … caps and exclamation mark.

Play by the rules and you will be alright. 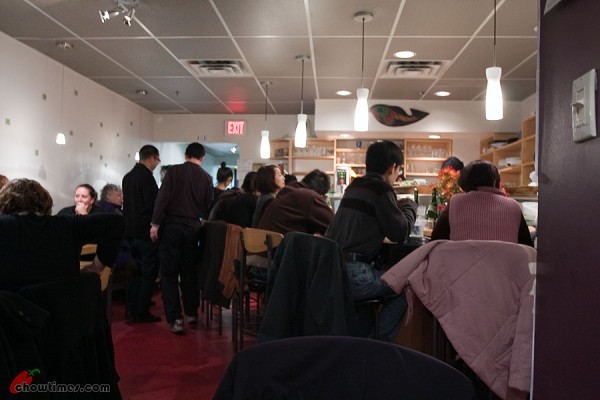 Toshi Sushi is really small. That’s why they find it hard to accommodate parties larger than six because it is just impossible to time an opening for that number of people. Their name of the game is to turn the tables as fast as possible so that they can fill as many stomachs as possible.

With all these legendary stuff in mind, I thought that service would be horrendous. It was not. Our waitress was pleasant, patient and helpful with the questions we had for her.

Since Matt had dined at Toshi before and knows this restaurant very well, I left most of the ordering to him. We started off with two rolls.

You will not find the above roll on their menu. Only a regular like Matt would know of its existence.

This is simply called the Box Roll. It has salmon, prawns, scallop, mayo and lemon. It is the lemon that gives this a very different flavor. It is pretty good and you should try ordering this.

I asked our waitress why this is not on the menu. She told me that … a customer once requested Toshi, the sushi chef, to make something special and Toshi came up with this. Word got around about this unique sushi that today, it is known to many people. I thought it is a smart move of Toshi not to put this in the menu but let the word of mouth spread of its existence. 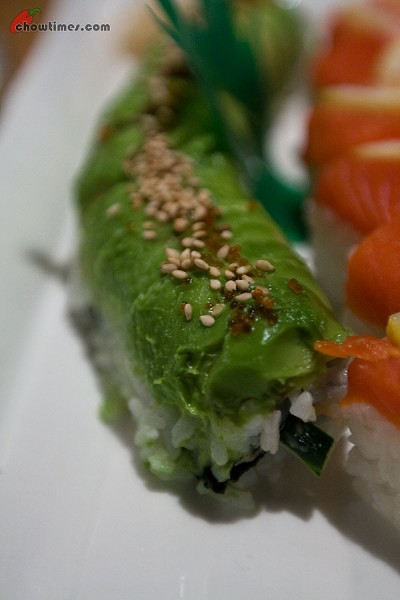 My choice was the House Roll. They have over 20 different types of Maki Sushis on their menu. I thought that among them, the one they bestowed the name “House Roll” would be the one they would be most proud of.

Toshi’s House Roll is made up of shrimp tempura, cucumber and topped with avocado slices. 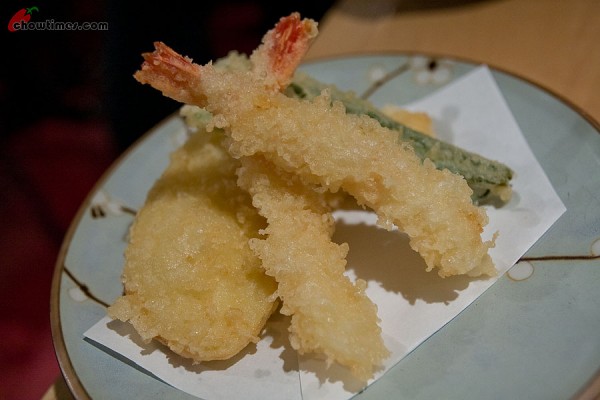 We also had the Tempura which is a mix of prawns and vegetable. It is good … the light batter is both fluffy and crisp just like its meant to be.

Toshi Sushi is popular because of the quality of their food and their reasonable prices. 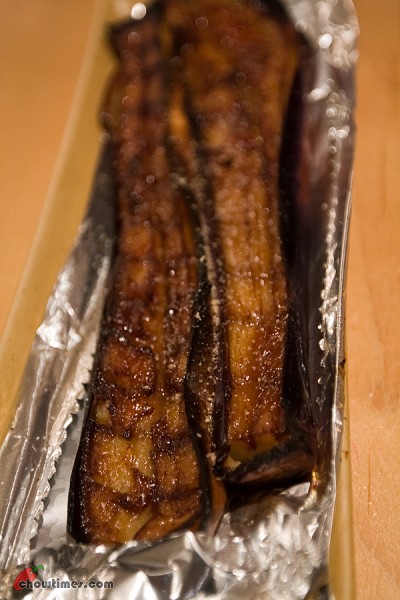 The above is another item that Toshi is famous for. This is one dish you should try.

I am not sure what this is called on the menu … but we just asked for eggplant, or candied eggplant as it is better known. Looking around, I see quite a number of tables having this too. This dish is mentioned many times in numerous reviews of Toshi Sushi.

Excellent is how I would describe it. It is sweet with a soft center and a crisp skin. Looks like it’s something simple enough to make at home, right? … Right? Suanne? Right? LOL! 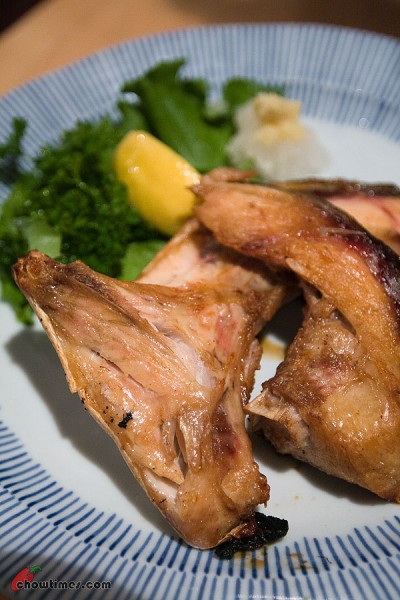 I wanted to try halibut cheek ever since etranger commented on this post that they are the best. Unfortunately Toshi Sushi does not have halibut cheek.

Am learning bit by bit about food even though I still don’t know what the cheek had to do with the back of the neck of the fish or its belly. 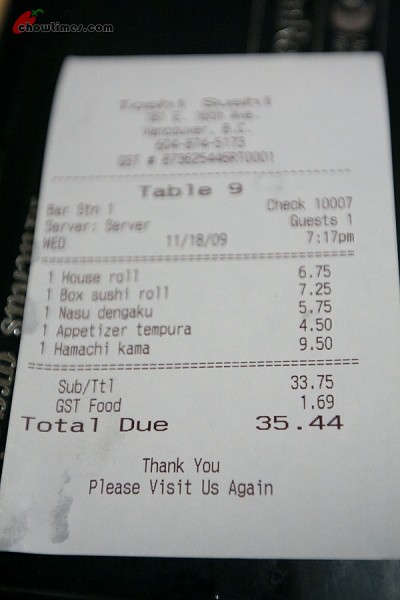 Look at the receipt. Other than the Hamachi Kama, the other items are quite cheap eh? The quality is quite incomparable.

Despite all the fears of excessive wait time for a table and soup-nazi like service, my experience was totally good. So I enjoyed this meal especially being able to discover interesting new food.

I gotta say this. In all my dining outs, I find that the ones I enjoyed most are those that I learn about the food. It makes me appreciate the food more if I hear a story behind it or of the special way of preparation or an interesting ingredient.

There is something I admire about VancouverSlop. He is creative although he does not blog as often as he wished to. He has an unique style who tries to inject humour in his writings.

I think he is the first food blogger who has a logo and brand his website. He even made VancouverSlop T-Shirts. That red chili chowtimes.com logo we have? That was an inspiration from VancouverSlop’s initial idea, frankly.

Check his name card above … you know what it is that is printed on the reverse side of his card. I thought it was brilliant. Shows me that he’s a thinking man.

So we talked a lot of how food blogging as we know it today will change over the years. Someday, sooner that we think, blogs will be so passe. We brainstormed of some great ideas. We also talked about what motivates food bloggers to do what we do. We talked about challenges too … stuff that we food bloggers would be able to relate to. We just hope that we can execute some of these ideas.

Alrighty … enjoy the Global TV’s morning news interview with Matt. He did well don’t you think? Needless to say, his traffic went through the roof the day of the interview.

He he he … not to be outdone, I was on the radio once. Did you know that? It was a radio station in Toronto that scheduled me to get my opinion on tipping practices in Canada … that was my so called 15 minutes of fame. LOL! 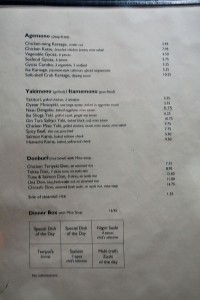 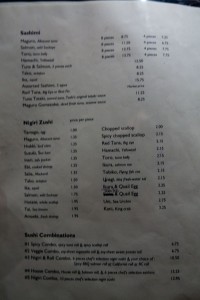 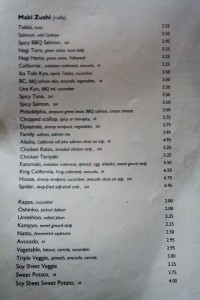