Updated on 17th June 2010: This restaurant has been replaced by Happy Sushi.

There is one thing we know that our boys would always like — sushi. They don’t really care about the quality at all. All they want is quantity. The more the better.

When I suggested that we check out the new All You Can Eat sushi restaurant, they were delighted. But there is a problem … Suanne just don’t like Sushi and raw fish. She will go along as long as his boys enjoys their food.

We went to Koi Sushi which is just next door to the ever popular Shanghai River. Specifically, it is on Westminster Highway just west of No 3 Road. We recently knew of this place because they had ads on the local city papers announcing their grand opening.

We remembered that this place used to be called the Shota Japanese Cuisine. 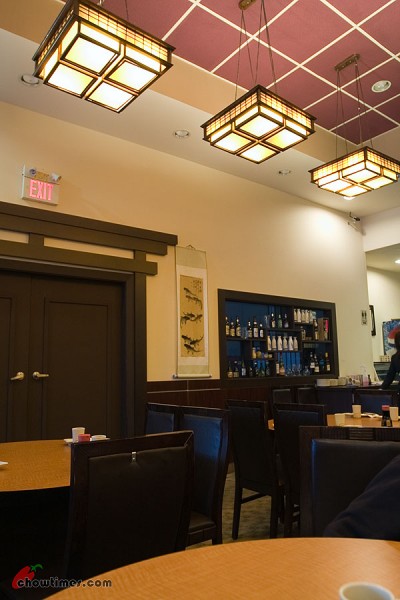 The interior was clean and decor was well coordinated. The chairs was comfortable and it was certainly spacious. Not many AYCE sushi places are like this. We were quite impressed. 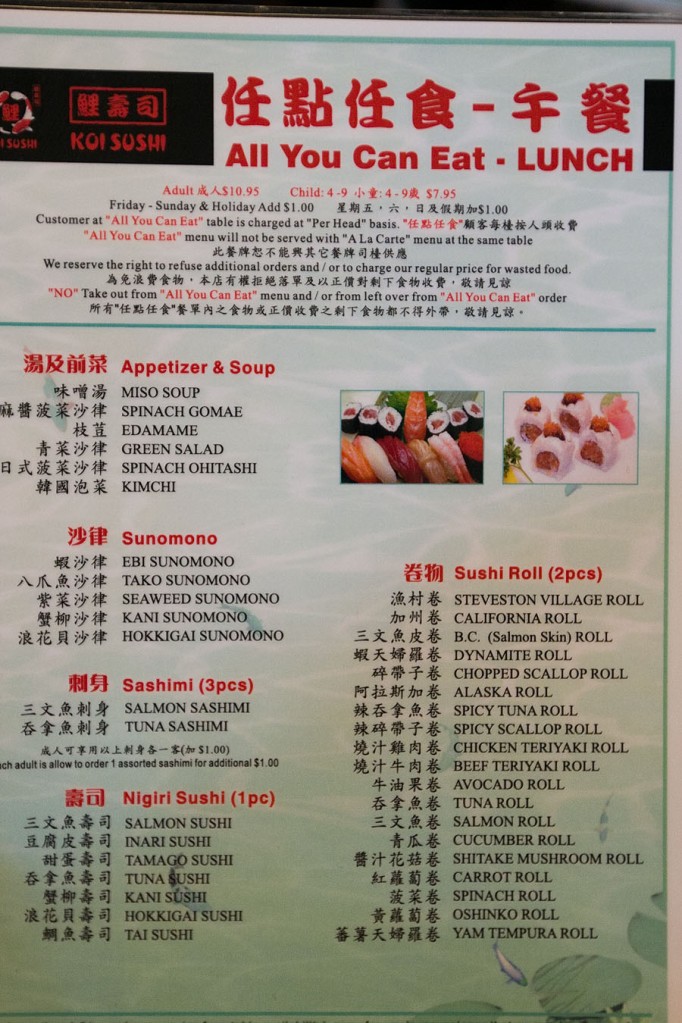 Service wise, it was slow. It took a while for our hot tea and menu to come … and even that we had to flag the waitress down.

Koi Sushi’s AYCE Lunch is $11. It is $1 extra for Friday through Sunday.

Koi’s AYCE menu selection is large and spread over two pages. Unlike a lot of other Sushi AYCE, Koi has Robata too. Needless to say, Suanne was really happy to see that. 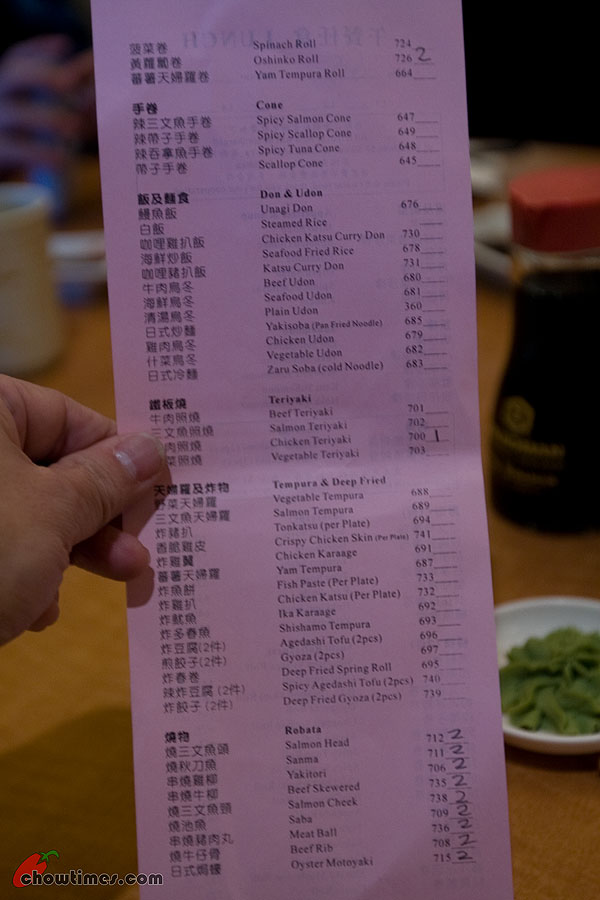 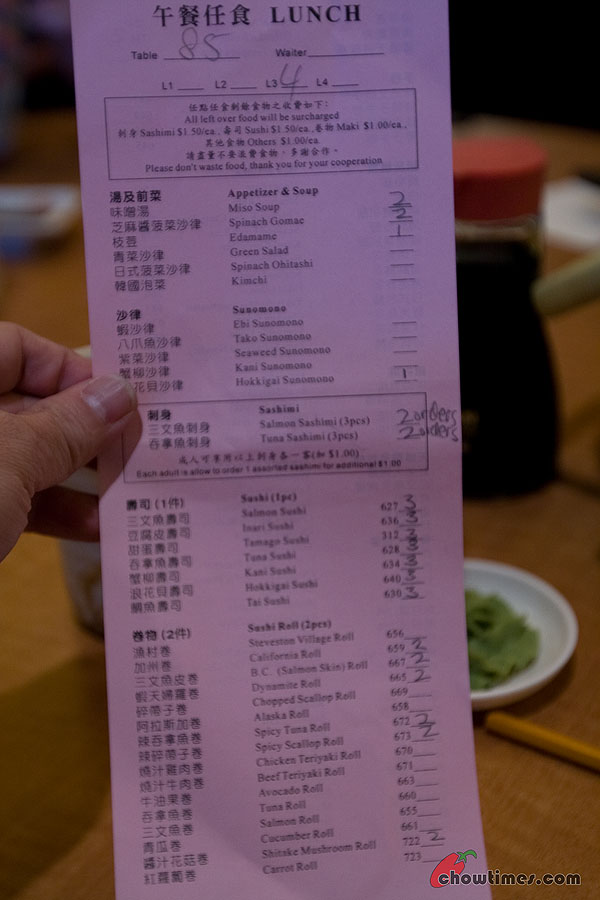 The above was what we ordered … lots of sushis for the boys and lots of Robatas for Suanne. We thought we would order this as our first order and then order some more afterwards. Nope … it turned out that is too much food. 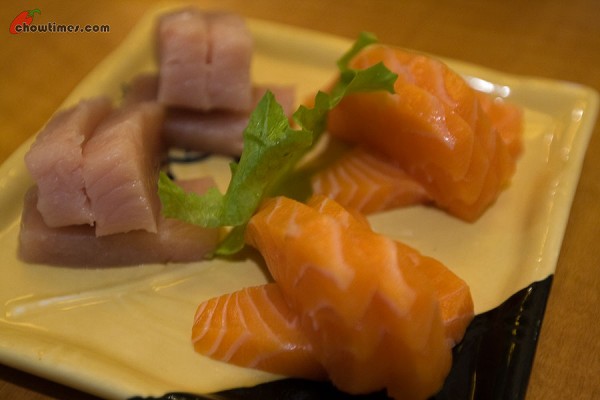 Their sashimi is $2 extra. I really don’t know how this all works out but regardless, the sashimi is small. I don’t think we had seen sashimis cut this small before. 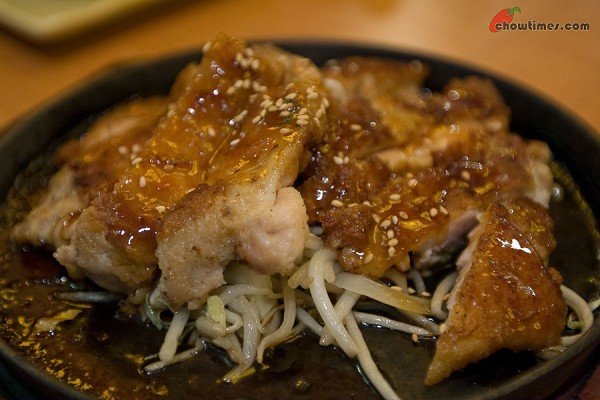 It is kind of hard to judge their servings. For instance, we had no idea that this one order of the Teriyaki Chicken came with … a full serving enough for two people.

And then there also is the salmon head. We ordered 2 servings but it came in a large plate. They gave us TWO complete salmon heads. Not that Suanne complain at all. She was just delighted that it is so much salmon head. I find it way too fatty.

We all love this dish which we had never seen before in an AYCE. It is chicken skin … deep fried crispy chicken skin. 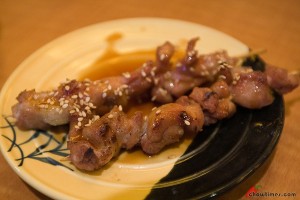 The robata was quite decent. Granted this is not high quality food as some of you foodie readers will come to expect. But it was very edible to say the least.

One of Suanne’s favourite is the oyster motoyaki. For the first time, we had this served in a dish not on an oyster shell. While this is not a problem but it just feels weird eating this from a dish.

Do you know to make this? We have the recipe here. It is easy to make at home. 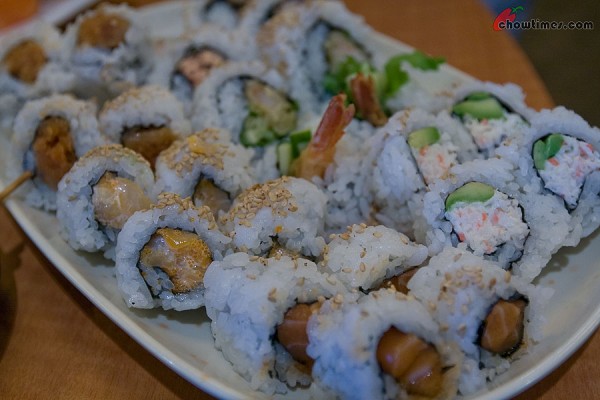 The rolls were really some of the worse looking and tasting ones we ever had. But our boys love them and gobbled them down in double quick time. They even fought over their favourite ones — the spicy tuna.

The mushroom maki is something else. First time trying this, it has an intense flavour and looks like they are marinated mushrooms. Do you know what this really is?

Here are the rest of what we had. Overall, I find this an OK AYCE place. But Suanne declared that this is her favourite AYCE in Richmond — simply from the fact that Koi has Robatas.

They do not have desserts on the AYCE though.

Remember I said that Koi Sushi used to be Shota Japanese Cuisine? Well, it is true. This is because when our credit card was charged the statement shows that this charged by “Shota Japanese Cuisine”. So I think it’s the same company. They had perhaps just rebranded themselves. As to the reason, I can only speculate that Shota was not doing well. Just so you know that Shota has pretty bad reviews on Urbanspoon … see here. 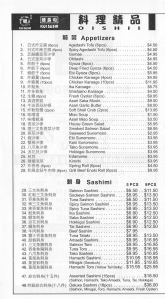 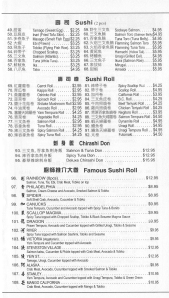 Tags: All You Can Eat, Restaurant Review, Richmond