After the Belgian Waffle breakfast at Damien’s, Suanne and I decided to take a walk around the Steveston Village. It was a lot warmer this week.

We stumbled upon a soon to be opened restaurant that will definitely be the talk of town in the next few months!

Steveston Village had changed a lot the past few years. There had been quite a bit of development. I like what I see because the Richmond City had managed to plan all the new development really well without altering the charm of the area. 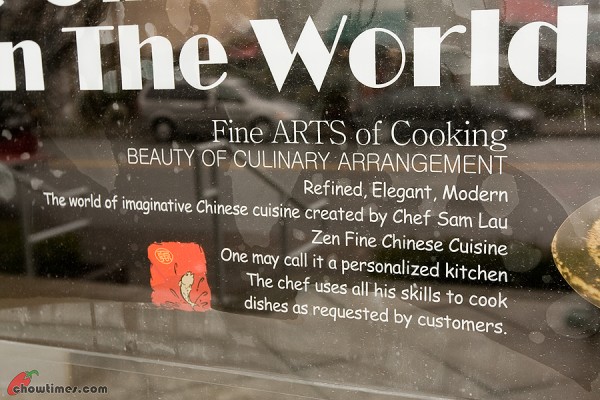 So we moved to take a closer look.

And YES, IT IS. Sam Lau and Zen Fine Chinese Cuisine is making a comeback in Richmond.

For those of you who do not know of Zen, we had written two blog posts about Sam and Zen before.

Chef Sam Lau burst into the limelight in March 2008. At that time, he was running a near bankrupt fine dining restaurant and was just mere … weeks from closing. His fortunes turned around overnight when Jennifer 8 Lee took notice of Zen.

Jennifer 8 Lee is a well respected journalist with the New York Times. She wrote a well received book called The Fortune Cookie Chronicles: Adventures in the World of Chinese Food in which she talked about Chinese Cuisine and the restaurants she had tried all over the world. Of all Chinese restaurants mentioned in her book, she called Sam Lau’s Zen Fine Chinese Cuisine as “the world’s greatest Chinese restaurant outside China.”

Just like that!  That one short statement resulted in the front page coverage on the Vancouver Sun and the world taking notice of this little know Richmond restaurant.

Immediately after the news broke, Sam’s restaurant had a second wind. From being on the verge of closing down, suddenly Zen Fine Chinese Cuisine was the rave in Chinese dining with long bookings. Suanne and I dined there and blogged about our meal there in this post.

Sadly that excitement did not last long because Zen did close a few months after.

I have a feeling that there is another restaurant in Richmond that is associated with Sam in some way. I am not sure how they are connected but Hakkasan (our review of Hakkasan here) appears to serve the same style of food as Sam’s. Does anyone know?

Back to Zen … it seems like it will be a while before Zen re-opens because the renovations had just started. From the fancy looking banner and branding, it also appears like he has some good financial and marketing backing this time.

I can’t wait to see what Sam has to offer!

Anyway, I want to share with you all an interesting video of Jennifer 8 Lee talking about Chinese Food in America … Enjoy!

The Coffee Well at Westminster Hwy and Tiffany Blvd, Richmond