Updated 19th Nov 2014; This restaurant is closed according to Urbanspoon.com.

Of late, Suanne and I had been trying to make our dining out a learning experience.  This all started from our gastronomic tour of Spain. In the tour, we had taken on an entirely new perspective of food. We had come to appreciate the origin of the cuisine and how it had evolved over the years — stories behind food.

Growing up, we carried the view that Chinese cooking is supreme in the culinary world. We thought it had by far the widest variety and the longest history. Even the culture of the Chinese people are centered around food … i.e. the Chinese celebrate the new year, birth, marriage, birthday by banqueting. Why, even at a funeral, food is part of the ceremony. Fasting? Virtually unheard of.

So we were intrigued by cultures which has a long history in the area of culinary arts. The more we read about them, the more we wanted to find out more. One of them is the Persian cuisine. In the learning process, we understood the pride that Iranians have in the rich heritage of their cuisine.

Suanne and I arranged to meet up with Mohammad and his lovely wife, Ilham. I asked that he recommend his favourite Persian restaurant. Being such an overly considerate person that I had known him to be, he suggested one place that is the most convenient for us … in downtown Vancouver instead of North Vancouver where the best of Persian restaurants are situated.

We met in the Darya Restaurant. Darya is located on a side street called Pendrell, just off busy restaurant row of Denman. The location of Darya is somewhat hidden and you will most certainly miss it unless you drive into Pendrell from Denman.

One tip about parking here … you know how difficult it is to get parking around the West End. Now, if you could not find a parking spot, you can actually go in and ask the owner and he will let you have the keys to the car park underground.

Darya is a very clean and pleasant restaurant. It is a self-service restaurant where most customers order and pay at the till. When we were there, we did not even had to order at the counter. Instead, the owner asked us to get seated and came by to take our orders.

We started the meal with some appetizers. We got something called Dolmeh Grape Leaves ($10). It is leaves wrapped with rice. We get a choice of hummus or salad.

There are many variants of Dolmeh with a lot of regional differences. This is a simple dish and is stuffed with rice. It is served cold and taste-wise, it is sourish.

The other appetizer is called Mirza Ghasemi ($9) which is an appetizer unique to North Iran. North Iran has the richest in culinary history and the region is rich in food produce.

The Mirza Ghasemi was really delicious eaten with the pita bread … and a healthy appetizer too.

The Baghali Polo Mahicheh … oh man, this dish is awesome.

I would just call this the Lamb Shank Rice but Mohammad was saying that it is not just any rice. It is basmati rice with fava beans. When he said that it just dawned on me that Persians take a lot of pride in preparing their rice. I learned that there are many ways that rice are prepared and many of them involve a complex process.

For the Chinese who eats a lot of rice, cooking the rice is a simple affair and often it is the only no-frill items on the table. Not in the Persian Cuisine. The rice must be perfect. I remember Kazem (an Iranian friend at work) used to tell me that rice used to be a food for the privileged and for special occasions. As such a great deal of care is placed in making it perfect. I remember I was quite amused when Kazem told me that in Iran, a prospective daughter-in-law is often judged by her ability to make the perfect rice (and tea).

I like the flavour, fluffiness and texture of the rice. It is not starchy like those in East Asia. As much as I thought this was perfect, Ilham complained that there were … very little fava beans on the plate. She was expecting a lot more, like 1/3 of the plate. I have no complain at all … because as a bonus, the serving is really big.

We ignored the salad on the side — that is western, not Persian! 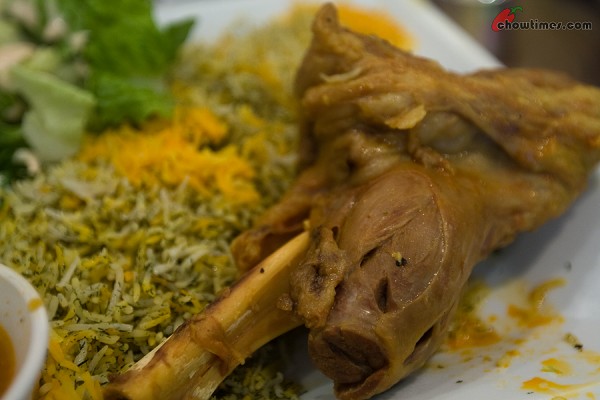 The lamb shank is marvelously tender, moist and has a bold taste.  This was my favourite dish and is worth the price of $13.

BTW, lamb is the most popular meat in Persian cuisine. So if you don’t know what meat to order in a Persian restaurant, ask for lamb.

I had always wanted to try Tah Dig because Kazem always raved about it and the fact that its availability in Persian restaurants is hard to come by. You see, Tah Dig is the crispy rice that you find at the bottom of the pot.

We asked the owner for Tah Dig. He told us to give him a few minutes while he disappeared to the kitchen. He reappeared carrying a casserole saying he does not have Tah Dig but the closest he can give us is the Tah Chin.

Tah-Chin is a savory saffron rice cake ($12). You can’t see it clearly but right in the middle is a layer of marinated chicken breast.

As simple as it seems, it is full of flavour. I believe the ingredients included yogurt, eggs and of course saffron. The best part is undoubtedly the crust on the side.

In a Persian restaurant, you must order Kebab.

The reason is the name Kebab originated from Iran and it is from Iran that spawns all the variations of kebabs, shish, doner and even satay.

The word Kebab means burnt or charred meat. It is actually made of ground meat form into patties on a metal skewer. Legend has it that the first kebabs were invented by Iranian soldiers who used their sword to grill the meat and that is why you see that Iranian kebabs are long and served on a metal skewer.

So we got Kebab Kubideh. That is beef kebab and costs ($12). We also ordered Joojeh Kebab (chicken) but no photos unfortunately.

You can see for yourself how well made the kebab is … looks mouthwatering juicy. The rice is fluffy and flavoured with saffron.

I remember someone telling me that saffron is more expensive than gold … pound for pound. If you think about it too, Iran also produces some of the best caviar in the world. 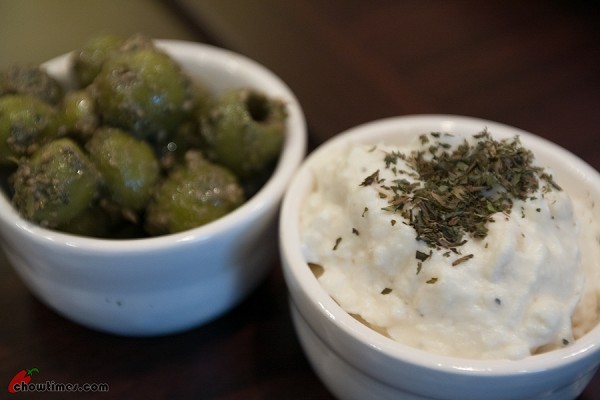 I don’t know what this is supposed to go with but they also gave us yogurt with dried mint and olives with green walnuts and pomegranate on the side.

Every table has this bottle above. It is some spices which I believe is for the meats. As far as I can remember, it tasted sourish.

I understand that Darya (which means ocean) is not the best of Persian restaurant in Vancouver but we enjoyed the meal, especially having Mohammad and Ilham enlightening us about the Iranian food and culture. You know, I really think that the Iranians are some of the most misunderstood people in the world. A lot of this is formed by what we read in the media everyday. If one can look beyond what we read in the papers, there are a lot to discover in the culture and especially the richness in the Persian

Below is their take out menu … 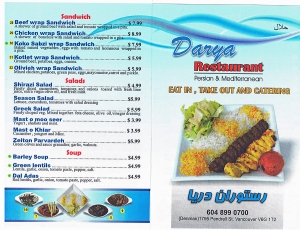