Updated: 27th July 2012: This restaurant had closed according to Urbanspoon.com.

Some of the best Thai cuisine restaurants that we had tasted was at Tangthai on Broadway. I still remember that visit to Tangthai. It was just the day before we went on a 3 week gastronomic vacation to Spain (Barcelona, Seville and Madrid). It was a rush for us but we went nevertheless. Our mind was clearly not on blogging but it turned out to be more than we expected.

We were impressed at the tasting during summer at Tangthai Broadway and how Dhitichaya Ruengsamarnwong worked so hard to bring authenticity to her restaurant and her food. See our previous blog posting on Tangthai Broadway here.

Since our last visit, Tangthai had just opened another restaurant with the same name. This new one is located on Robson at the intersection with Denman.

With floor to ceiling glass walls in front, Tangthai on Robson looks a lot more inviting. As we walked into the restaurant, Suanne and I were surprised that Dhitichaya pasted a poster of our review on the entrance of the restaurant. We are just small time bloggers and seeing our post in a poster form was simply surreal. LOL!

Location wise, this new Tangthai restaurant is way better than the one on Broadway. There are lots of foot traffic for sure.

Assisted by her husband, Deo, the main person behind Tangthai is Dhitichaya Ruengsamarnwong. It is such a long name that I am sure that most people will find it hard to remember. So, Suanne and I just called her by her nickname, Sonia.

The Tangthais of Vancouver is an offshoot of a successful Thai restaurant called Padthai in Edmonton. 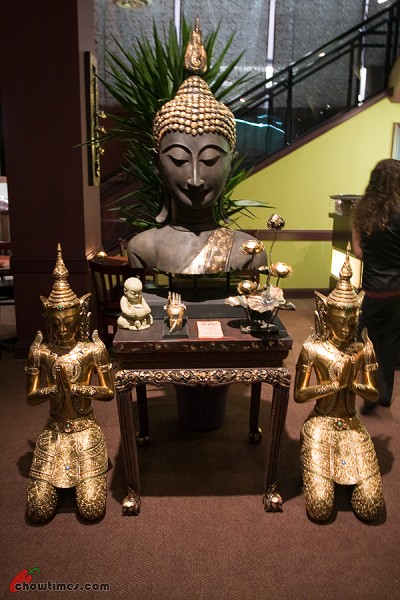 Tangthai tries to differentiate itself by being authentic. It is pretty evident as we walked through the doors and greeted with Thai carvings and statues.

The dining area is adorned with wooden panel carvings. Even the carved table tops were made in Thailand and shipped to Canada. While it was a very nice and pleasant dining area, it is still a little rough around the edges. This is coming from a perfectionist me although I understand that they had just started operation just a few weeks back. 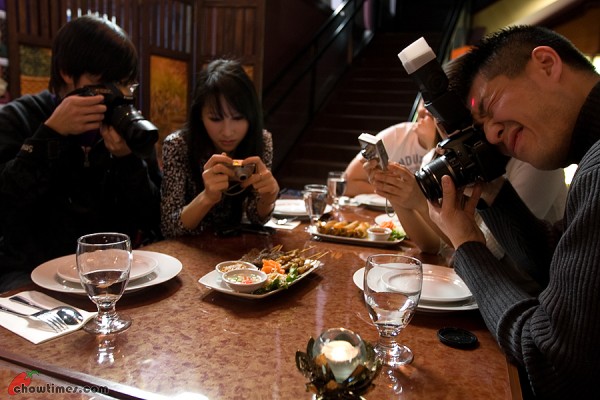 Suanne and I were not alone this time.

When Sonia contacted us that they wanted to invite us to a media event of sorts to introduce the new Tangthai restaurant, we expressed that we will not like to go to an event that we just jostle with hoards of people and sample minuscule morsels of food. I think food bloggers should be treated with more respect than that! So, I suggested that it would be more meaningful for us if we have a proper sitdown dinner and sample proper food in a proper setting. Sonia liked the idea and then said “bring along your friends too”.

So we brought along friends … quite a lot of them. Blogger friends!

Suanne and I decided to invite some of the very best and most prolific Vancouver area food bloggers along for this tasting. Can you recognize any of them above? The ones that attended are:

I’ll put up a link to their reviews here the moment they post theirs. There were a couple other bloggers who could not make it unfortunately. 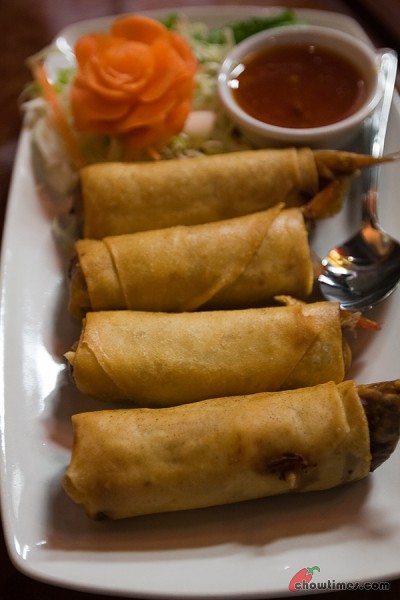 We started off with something called the Prawn Skirt ($9 for four). We had this before and it is good. It is like spring rolls except that they used better ingredients. It is stuffed with prawn, minced crab meat and water chestnut which gives a very distinct texture.  With the sweet chili dipping sauce, it is a good combination.

Too bad we were eating this with friends. This is because I can only do one dipping on the sauce. If I am with Suanne, I will dip into the sauce before each bite.

The Prawn Skirts were followed by another appetizer. This is Beef and Chicken Satay (4 for $7).

But Sonia insisted that satay is as much Thai as it is Malaysian or Indonesian. I give her the benefit of the doubt.

There are a lot of similarities to the Malaysian satay but there are also some subtle differences that makes it unique.

It appears that the marinate used is largely similar particularly the use of turmeric which gives it the yellowish tint. I told Sonia that there is a big flaw on her satay and that is the absence of chicken skin. LOL! No seriously. In Malaysia, the best satays have the skin on the skewer which makes it more juicy. I understand why she did not have it because Vancouverites are such health freaks.

Tangthai uses lean chicken meat in the coconut milk based soup. The soup was rich and lightly spicy. We find that this soup is thicker than what we normally get elsewhere. This is delicious. Personally, I would have prefer to try Tom Yam simply because Tom Yam is a national dish of Thailand.

The first thing I noticed when the dish came was the food carving.

One of the thing we vividly remember from our last visit to Tangthai Broadway was their very impressive food carving. It seems like they had tone this down a little and not as spectacular here.

This dish is called Pla Rad Prik  ($16). This is deep fried tilapia with sweet and sour sauce. The sauce is more on the sweet side than it is sour which I prefer for fishes.

Tangthai deep fried this so crisp that the some parts of the bones and fins are brittle enough to eat.

No one touched the head. Good!

I know Suanne would want to pick the flesh. She always does but in the presence of people she did not. Not me.

Sonia told us that this is a new dish she had just introduced to the menu. So we are kind of a guinea pig of hers for this new dish. LOL!

This is called Pla Mul Pad Prik ($16) or Stuffed Squid in Green Curry Sauce. Nestled among the squid is pieces of fig.

Sonia said that this is a common dish in Thailand. This dish has a pronounced lemon grass flavour. Although lacking in color, it is quite spicy. I would say unexpectedly spicy despite knowing that it is curry.

The squid is stuffed primarily with … shrimp and shallot. Very interesting dish but I got a feedback for Sonia … make it with bigger squid. Not only that it looks good in the dish, it will make the squid stand out as the “hero” of the dish.

Next up is one thing that is not on the menu — at least not yet.

This is Sonia’s experimentation on the simple BBQ chicken. She is calling this as the Herbed BBQ Chicken for now and intends to perfect this.

Maybe if you want to try this, you can ask Sonia if she can prepare this for you.

Sonia personally experiments and creates Tangthai’s dishes. Being bloggers we get to walk into the kitchen to see how they work.

I was surprised to see Sonia at the wok in the kitchen at one point helping her chefs when they were super busy. I was impressed. 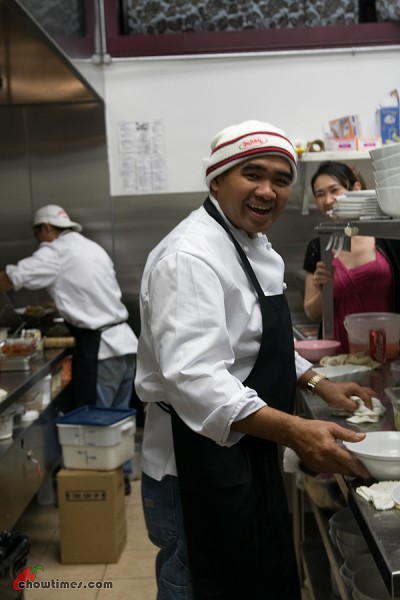 That is Sonia at the background with two of her three chefs in the kitchen. She introduced her chefs to us but we could not really ask them any questions because they barely understands English. Tangthai’s chefs are all from Thailand. Sonia believes that doing so helps her protect the authenticity of the food she serves in the restaurant.

The one in front is Somchok Suknawarat and the one with the wok in the background is Pigool Srichat. We should give them a more westernised name shall we? Did you notice this … that Chinese often adopt English names in Canada while most other Asians keep their native names? Case in point, Ben and Suanne.

Let’s call Somchok, Sam and Pigool, Philip … shall we?  Sam and Philip smile a lot though. Which reminds me that Thailand is also known as the “Land of Smiles”.

Next up is Eggplants and Basa Fish. Eggplant and what?

I was thrown off for a moment and got to ask a few times. There are actually two items in this dish … both look similar at a glance. The eggplant is coated with “something” before being fried. As for Basa fish, I learned that this is a common catfish native to Thailand. This dish is drizzled with a very lemony-grassy sauce. 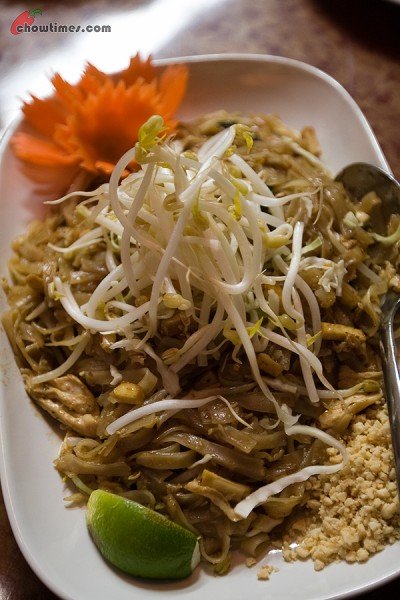 The national dish of Thailand is Pad Thai. So this is like a litmus test for Thai cuisine.

Except I do not know what defines a great Pad Thai. So I am commenting from the basis of my own personal preference. We like that, this time, it is a bit drier than we first had it in Tangthai Broadway. Taste-wise, the tamarind based sauce does not stand out as much as I like it to be.

The fresh bean sprouts gives it a different texture to the rice noodles.

Next was the Beef with Lemongrass. Known as Nua Pad Takhai, this is $14.

It is a spicy dish and the beef is tender. At this point of the meal, it appears to me that the flavour of Thai food is largely characterized by the sauces used. I am not sure if this is a fact or not but it does seems like so.

That is why rice is so important in Thai cuisine. Thailand is known as the biggest exporter of rice in the world and produces some of the best rice too.

We had plain Jasmine rice even though Tangthai also serves the richer Thai coconut rice. Jasmine rice originates from Thailand. 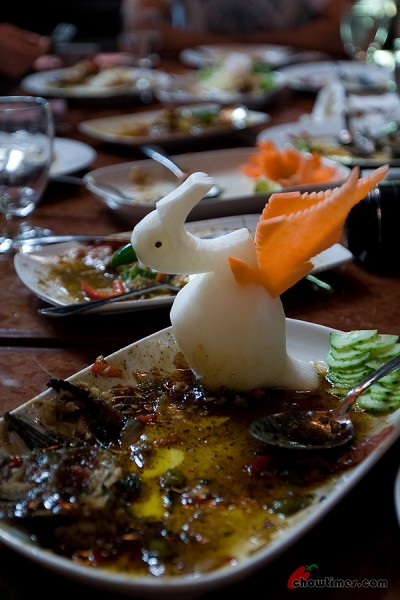 There was a lot of food that we tried. No one ate the bird!

Frankly, Tangthai is undergoing growing pains and is understaffed. I will cut them some slack in this department understanding that they had just opened. I personally think that they need to staff up very quickly especially when they open up the space upstairs. 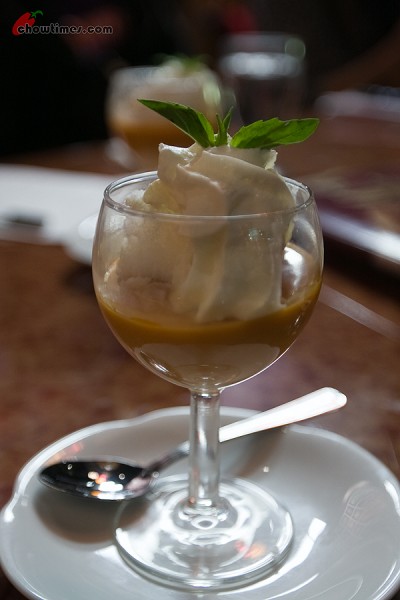 To cap off the night, Sonia served us dessert. This is Thai Tea Pudding ($6) and personally made by Sonia herself. This is not on the menu yet and is still another item at the experimental stage. It makes me think that Tangthai will not be contended with just serving run of the mill Thai food but will constantly come up with new dishes.

The Thai Tea Pudding was quite sweet and tasted like milk tea. While it does look like a lot of whipping cream topping the pudding, underneath that whipping cream is actually a sponge cake. 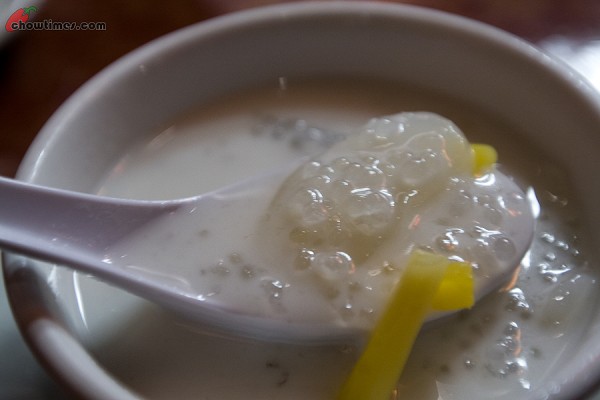 We also tried the Tapioca Pudding. It has palm “meat” and jack fruit in it.

Some of you will like it but understandably some will not. This is because it is BOTH sweet AND salty – a contrast of tastes.

Tangthai had garnered a number of positive reviews on Dinehere.ca for their Broadway location. I really think that Tangthai has all the right ideas and ingredients to be successful in Vancouver particularly in the highly competitive area like in the West End. Execution is one area that they need to polish up on to higher level. It is not difficult to deal with but time will tell.

So Dhitichaya Ruengsamarnwong … we want to say Koh Kun Ka!

Thanks a lot for hosting us and introducing us to your restaurant.