Updated on 10th July 2010: The Shoryumen, Fumisen and Bakudanyaki Food Trucks have moved to 8740 Charles St. See video below for new location.

Some of you might remember that I blogged about Richmond’s answer to Vancouver’s Japadog last summer. That post generated quite an active discussion not only on chowtimes.com but a picture from that post also made it into a discussion thread on chowhound.

The unflattering picture of a half-eaten bakudanyaki became the focus of the Most Frightening Food You Have Seen Lately discussion thread. When I took that picture above, the only thing I was thinking of was how delicious it was. But on hindsight, I guess the Bakudanyaki does look rather frightening. 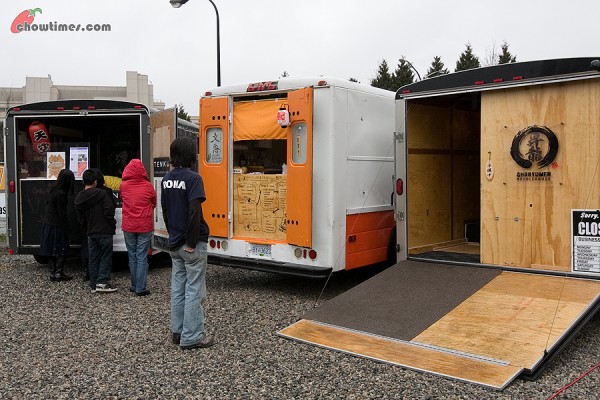 It is now THREE food trucks. I had wanted to earlier name this post “Vancouver 1 – Richmond 3” but decided otherwise because it will inflame the Vancouver area food bloggers.

In addition to the Tenku Bakudanyaki food truck, they have expanded to selling ramen and sushi cones too. They are still at the same location — at the intersection of Gilbert Road and Elmbridge Way.

The Richmond food trucks are easier to locate now. It is just next to that Inukshuk which is fashioned out of containers. Someone apparently thought it is a great idea to put that up in support of the Olympics. Good thing they did not paint it in the colors of the Vancouver 2010 logo or else VANOC will be going after them.

*gasps* We are getting identified. While waiting for the interview to finish, the assistant of the CBC interviewer turned to me and asked “Are you chowtimes?” LOL!

I was kind of surprised, right? So my first reaction is “Yes, but how did you guess?”. Apparently she recognizes Suanne, Arkensen and Nanzaro. 🙂

The man behind the three food trucks is Kan. He came across to me as energetic and brimming with ideas. While he was making the ramen for us, I asked him some question. He was excited  and wanted to tell the world the plans he had in mind and yet he held back being specific about them. He said three times how little time he has to implement his plans.

From my conversation with Kan, I can clearly see that this young man is not going to stop expanding anytime soon.

We decided to try two bowls of Ramen. These are simple ramens.

Ordering is simple. You just choose one of the soup base you want. Kan said that he only have the Kuro, Aka and En ramen for now. The more expensive Ton ramen is not available until February 9th. That Ton is interesting because he said he is limiting that to only 20 bowls a day because of space and time constraints.

Each of the ramen comes with … the basic topping of seaweed, veggies and green onions. 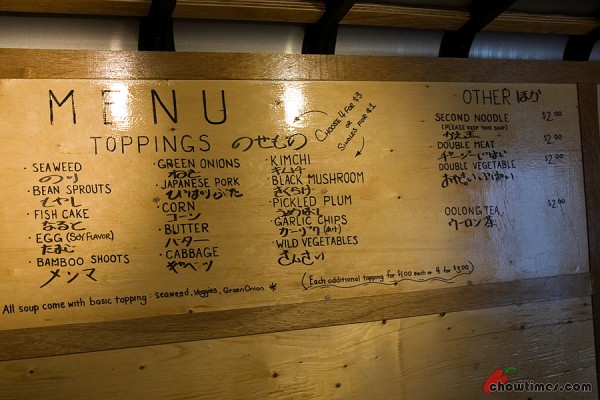 You can get extra toppings for about $1 each. So actually if you think about it, it is not exactly cheap.

The noodles was delicious. We had the En (seasalt) and the Kuro (classic soy sauce). While they look alike, both of them tasted uniquely different. We like the Kuro better.

The bowl is kind of small though, considering that you get monstrous bowls of ramen in many ramen shops in Metro Vancouver for about the same price. 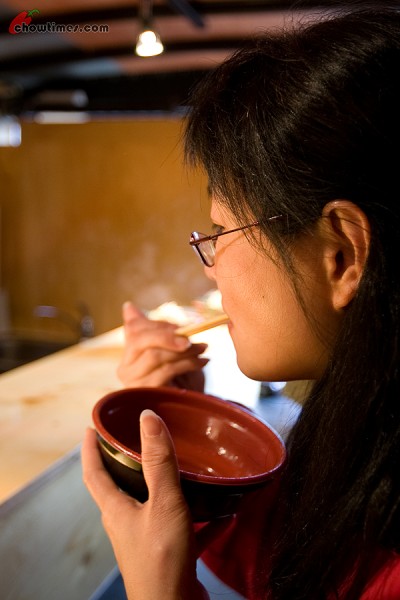 We eat standing up by the counter. We were given only the bowl and the chopsticks. I asked for a spoon for the soup but they don’t have it.

You eat the ramen exactly like they way they do in the micro ramen shops in Japan. You take the bowl in your hands and slurp the noodles and soup in front of the chef. And you have to slurp LOUDLY too. Serious. Doing this is telling the chef how good his ramen is.

They try to cut down on waste. So if you want to save 50 cents bring your own bowl. I think it’s a marvelous idea. But then I was thinking how many people will actually bring their own bowl. 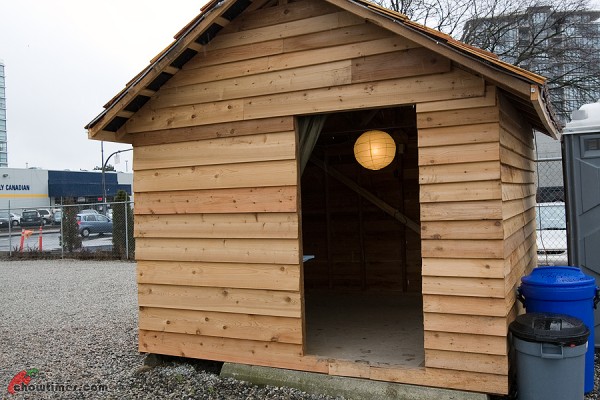 The little food truck is a bit small. If you have like 6 people in that ramen food truck, no one will be able to get in anymore.

So they have a small hut by the side where you could go in and eat there.

Well, don’t expect chairs and tables here. It is also a stand up eating place. At least it is more spacious here and protects you from the elements during bad weather. 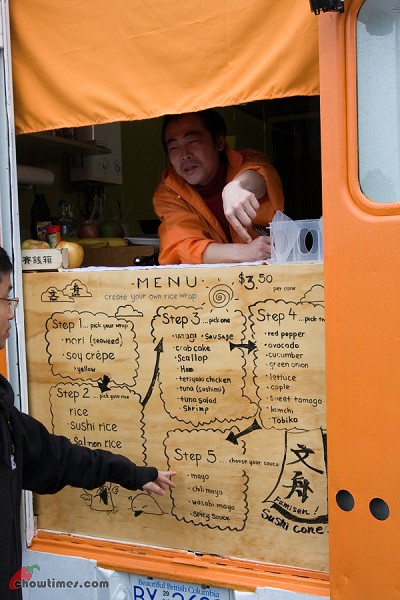 After the Ramen, we went to try the sushi cones. They call this Fumisen.

That gentleman who was manning this food truck was super friendly. This is necessary because for the uninitiated, it could get confusing at a glance. 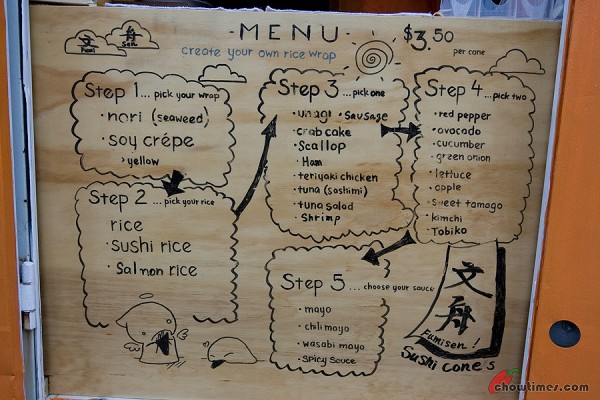 Actually it is not as complex as it seems. It is a five step selection. I guess the difficult part is figuring out your combination — that takes a bit of thinking.

I don’t know what Arkensen did right. The gentleman in the food truck gave him a choice of THREE instead of two on “Step 4”. He did not give us that special treatment.

If my math is still correct, I think there are a total of 15,552 possible combination here. You think it is right? 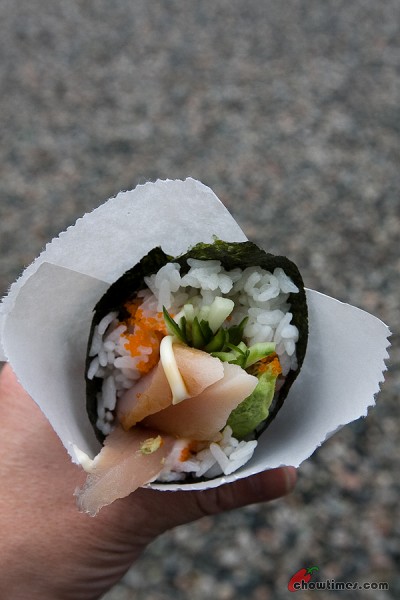 We got two cones. The first one is with the nori wrap. Each one costs $3.50. I guess it is kind of OK price-wise.

With a touch of soy sauce, it tasted good. Just a drop or two is more than enough.

We all like the yellow soy crepe better. It is unique.

This is at best a snack. Two of this will perhaps make a nice light lunch. It is tasty and it is fun.

One thing that Kan did tell us though … he will be expanding by one more food truck by March. The new one will be selling Japanese desserts. I have a strong feeling there will be more coming over the next few months.

So the street food variety score now is Vancouver 1 Richmond 3. Normal hotdog stands does not count here; only Japadog counts for Vancouver alright?

Within the next two months, it will be Vancouver 1 Richmond 4 with the addition of the dessert truck.

Wait! It could well be Vancouver 0 Richmond 4. This is because Japadog is setting up a full on restaurant one of these days (see here).

No wait! It could well be Vancouver 0 Richmond 50+ if you take into account the food stalls from the Richmond Night Market coming this spring.

Oh yeah … Vancouver, you could learn a few things from Richmond. LOL! 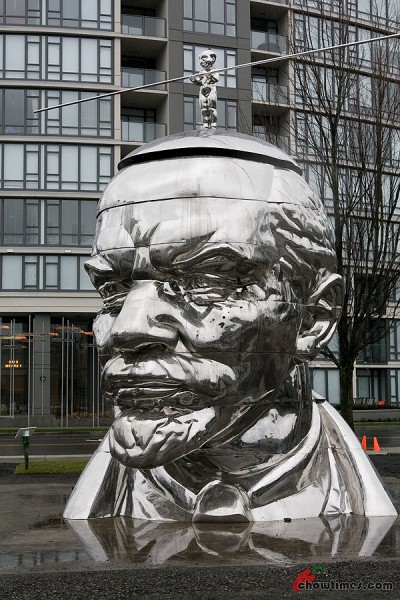 Just a stone throw away from the food trucks, are the now infamous Biennale sculptures. Of all the sculptures that the Biennale folks could place in Richmond, they had to put this one in the Chinese Republic of Richmond.

But of course they had to do this right?

The more controversial the sculpture is, the more successful it is. 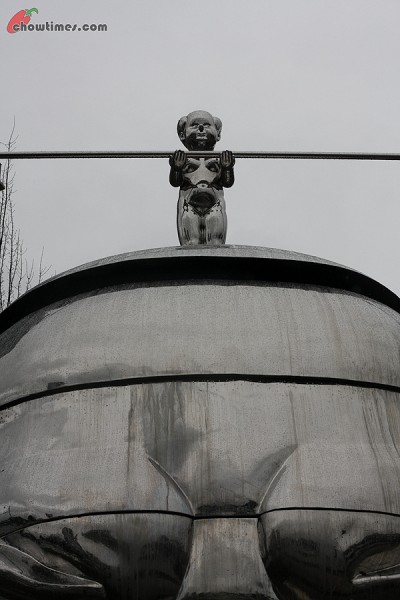 To the Mainland Chinese, they consider this inappropriate the way Mao is depicted — as a cartoonish little girl perched on top of Lenin. The Chinese Consulate complained about this too.

This sculpture attracted some vandalism but so far it was nothing serious. When I was there, there were mud splattered on Lenin’s face.

Frankly, for me I don’t care because I was not born in Mainland China.

Anyway, enjoy the rest of the picture I took … 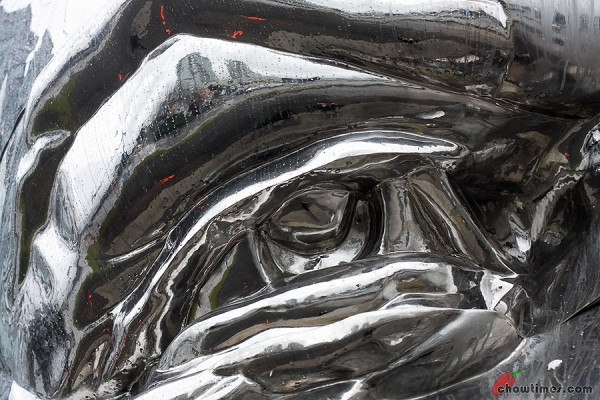 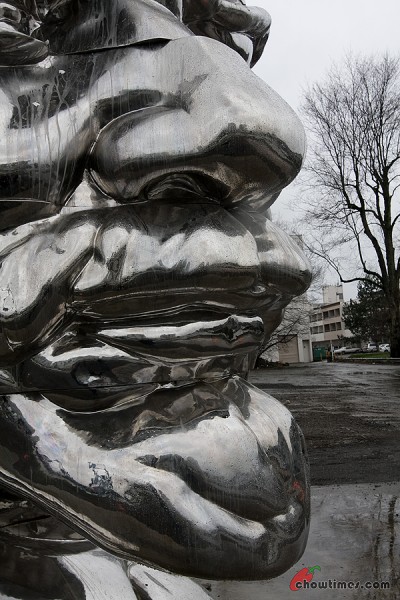