It was Day 17th of the Vancouver 2010 Olympics. Arkensen and Nanzaro was getting all excited about this big day when they will perform in the Closing Ceremony. The Closing Ceremony does not start until 5:30PM but they need to report at their station at 11:30AM.

For Suanne and I, the plan of the day is centered around watching the Canada-USA gold medal hockey game and the Closing Ceremony on TV at home. After dropping the boys off and wishing them to break a leg, we thought we quickly grab a sandwich from Ba Le and go back for the game with time to spare.

We went to the location on Kingsway and Fraser. Their other location is in Chinatown. BTW, is the name Ba Le mean Paris in Vietnamese?

Ba Le is well known f0r the Vietnamese baguette. Between the Chinatown location and this location, you MUST come to this location. This is because …

… Ba Le had just started operation of their new expensive oven just a few weeks ago. As reported on Chowhound, the owners had this industrial sized oven imported from France and had the baker sent to France to learn to use the oven too.

Just as we were to place our order, we saw them taking out a freshly baked batch of baguette from the oven. It smell so good that we told ourselves we are going stay and eat in Ba Le … on one of the three small tables just next to the oven.

We counted that batch that just came out. It was 200 baguettes in those trays. It seems like they make a lot … more than a thousand for sure. Looking at the operation here, I am sure they make this and sell it to other restaurants. We were wondering if they do sell just the freshly baked baguette to walk-in customers. 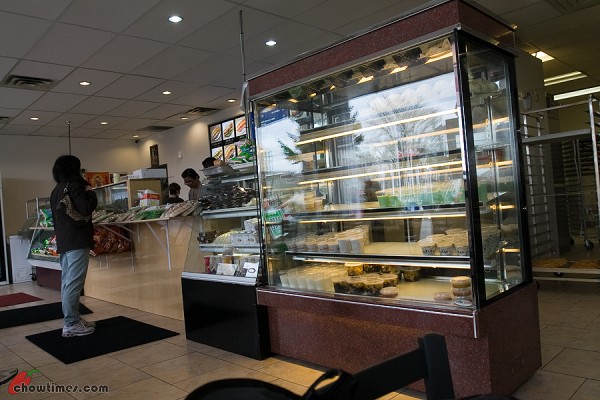 The picture above was deceptively quiet. It was all about angle and timing! There were a lot of customers lining up for their orders. A lot of them obviously taking out for the hockey gold medal game because they were wearing Team Canada jerseys. I had never seen such lines for Banh Mi before. The assembly station was extremely busy and somewhat chaotic. I can see that all four people were working heads down trying to keep up with all the orders.

Suanne observed that the man who was taking the orders (and handling the money) uses his hands to pick up the food too.

They have ten different types of sandwiches on the board. They are all about $3 to $4. Besides the baguettes, they also sell a lot of other Vietnamese delicacies. People come here for the baguettes.

We got two sandwiches to share. Selecting one of them is easy … it was the one that is simply called the Special sandwich (right). The other one was the meatier Grilled Pork sandwich.

The baguette has the nice golden look to it. The slashes is shallow and the crust thin. Light and airy, it crumples easily when pressed.

So, I was complaining to Suanne that she does not know how to eat sandwiches. You see, she just has to press the sandwich each time she takes a bite. It was reflexes I know but this makes her sandwich all flat like sliced bread by the time it was half-finished. Ohhh … I can’t stand that. LOL! 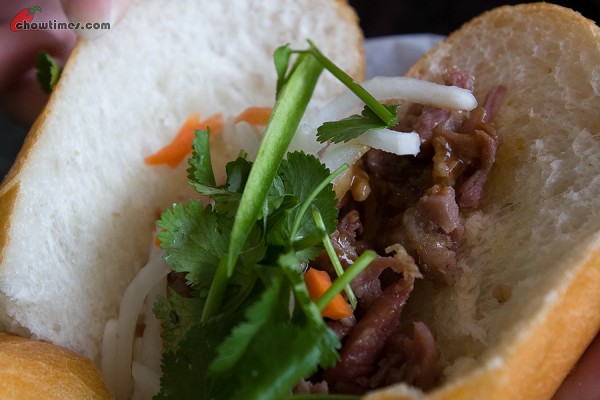 The Grilled Pork Sandwich ($3.50) had that moist pork pieces which was slightly … spicy. We thought it was not a lot of it but understand that the hero of this Banh Mi is not the grilled pork but the baguette and the balance of the filings. Yeah, this is the kind of sandwich one would eat with eyes closed and mmm’ing all the way along. 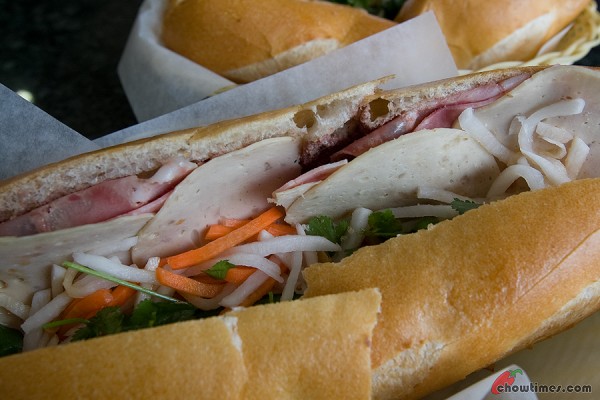 The Special is $3.25. There are different types of ham, cold cut. With the crunchy pickled daikon and fresh ingredients like carrot, cilantro and chili it presents a refreshing and contrasting taste of freshness, heat and cold.

Do one judge the goodness of baguettes by the crumbs it leaves? It was messy eating this but I had worse. I think the reason is the thinness of the baguette they make in Ba Le. 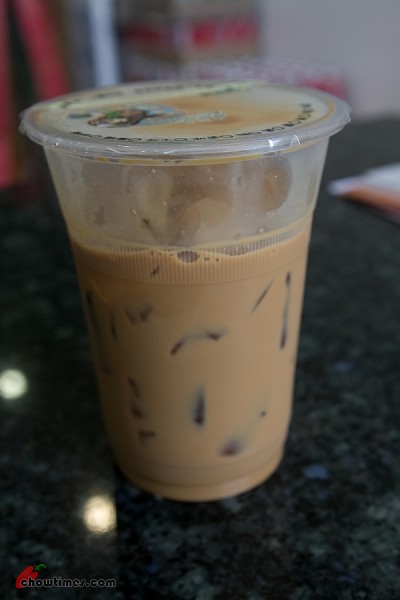 We also ordered a Vietnamese Coffee ($3) which they forgot about. We had to remind them but they were genuinely so taken up keeping up with the stream of customers. Not many people came here for the coffee, that’s why.

From the picture on the board, we thought they would serve this with the usual Vietnamese drip. 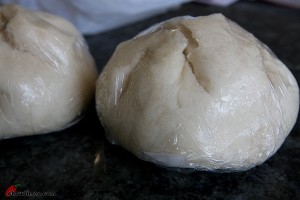 Before we left, we picked up a couple of different things for breakfast the next morning.

You should check out the Banh Mi in Ba Le … I think you will like it as much as the customers who queued everyday at the deli do.