The day before the Olympic started, the senior management team of McDonalds flew into Vancouver to host a global press event at the Games Main Press Center. McDonalds, as it is well known, has been a worldwide Olympic partner for over 40 years.

I was totally excited when McDonalds wrote to me a week before the Vancouver 2010 games asking if chowtimes would like to attend the global press event. I immediately said yes. I would not give up that golden chance to get into the highly secured Main Press Center and get close to the heartbeat of the games.

A few emails to and fro with several people within McDonalds follows after. They were asking about chowtimes and stuff like our traffic profile. After a while they asked … would you like to speak to Chef Dan Coudreaut? Chef Dan, you see, is the Director of Culinary Innovations. The man behind the food … and in many respect, considered as the most powerful chef on this planet.

Whoa! Play-acting as a journalist among hoards of journalists is one thing but being offered a 1-on-1 interview with The Man is yet another. As much as I did not know what to do, I knew I could not pass off this once in a lifetime chance. I replied “yes” first and then try to figure out something along the way. 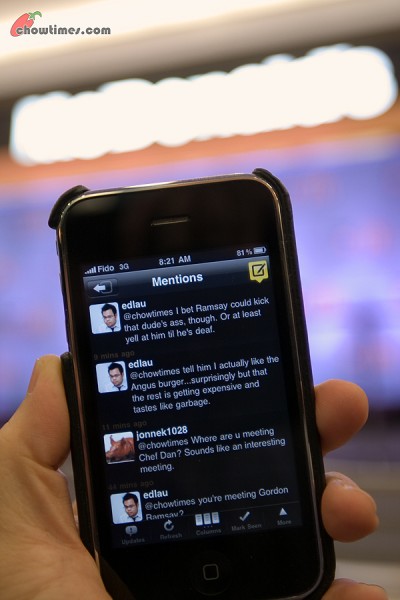 Truth be told … when I mentioned on Twitter and chowtimes of the 1-on-1 interview, there was one particular reader who wrote an email (albeit politely) that she will no longer support chowtimes because of my acceptance for the interview. She symbolically asked me to remove her name from our email distribution. That sort of set me thinking how much emotions that some people shows at the sheer mention of McDonalds name.

I am not going to push for an answer. You know and I know that everyone can argue until the cows come home and we will never be in any agreement. I went to the McDonalds event with an open mind and no prejudice with the intention to hear the low down from the #1 chef of the #1 restaurant in the world.

It was a mad scramble getting the press credential. The media event was to be at 9AM and by 8PM the previous day, I had not received any instructions on what to do and where to go. I shot off an urgent email to McDonalds at night and that set a few wheels in motion. I think someone dropped the ball on chowtimes. I only got the go ahead at about 5AM — 4 hours before the event!

It was a wet day when I took the Skytrain to the Convention Center. I was given a couple of run arounds before I got to the right section to collect the press credential from. The volunteers were new on the job and had a hard time locating all the passes that were prepared upfront. It took 20 minutes to locate my pass — got me worried that they might not have my records and miss out on the event. 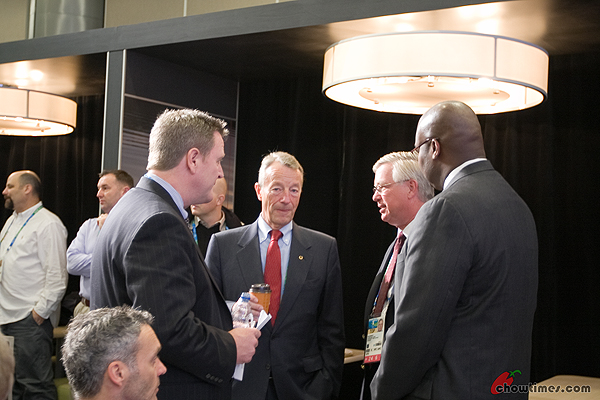 Almost everyone in the broadcasting world you can think of is there. They were wearing shirts with logo of Reuters, NBC, etc! The photographers who were seated near me were all carrying big cameras … not one camera but two. And they seem to know each other. There I was a small time blogger — sigh, no one really bothered to talk to me other than saying “how is it going?”.

I don’t dress like they do and certainly don’t carry the right type of equipment. Next time, I am going to print a T-shirt with the chowtimes.com logo so that I can feel more like part of the gang.

While waiting for the event to start, we were served some food. It was early and serving full sized sandwiches was not quite right, one thing that I like was the Mini Mac. The bite sized Mini Mac tastes exactly like the Big Mac. It is amazing that they managed to make it so small — it was just like the size of a 25 cents coin. 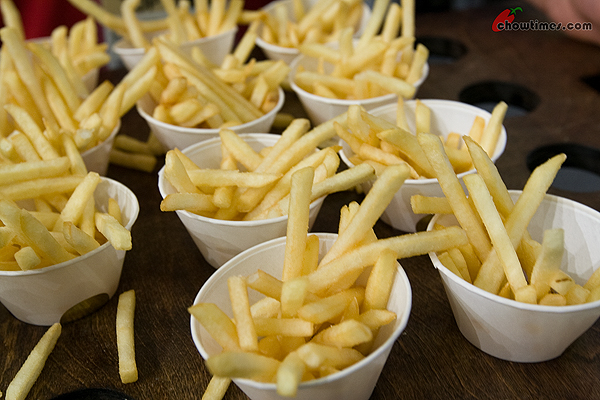 I see that no one really touched the fries. It is because it it’s still too early for fries. But I took it because I wanted to sample their new sauces.

The new sauces were not to my taste. Maybe it is the name that they gave it — zesty mango, sichuan and thai. I was particularly interested in the Sichuan one. It was more peanuty than anything. It wasn’t spicy in anyway that can be associated with the word Sichuan. But I know … these sauces were not created for Asians but for the US market.

The press event was somewhat short. There were speeches from McDonalds management, the IOC and VANOC. The speeches were quickly followed by some fun and games.

The McDonalds Champion Kids program flew in children selected from Canada and all over the world with a once-in-a-lifetime opportunity to experience the Vancouver 2010 games first-hand. These 6-14 year old also have a chance to serve as youth correspondence to share their experience with their hometown news outlets.

After the event, I was introduced to Chef Dan. He comes across to me as a down to earth kind of person. Very approachable.

As we settled down, I was shifty and nervous. I was nervous because of what I was about to say to kick off the 1-on-1. I just said three words … “Junk food. Why?”

On hindsight, I wished I had not started with that manner. At that time, I was thinking that I need to get this nagging question out of the way. I felt at that time that I need to hear from McDonalds what their response is to the negative feedback to their food.

It was a bit of a pause before Chef Dan responded. I think he wasn’t expecting this from me. It was an awkward way to start, and confrontational. I further elaborated by asking him why do so many people perceive McDonalds food as junk food? Why does McDonalds continue to draw criticism about their menu and business practices?

Chef Dan’s reply was pretty much summed up as “I really don’t know all the answer”. He downright said that he does not personally encourage everyone to eat at McDonalds everyday. He expects the same thing of his two young children to have a balanced diet and that McDonalds as a place in their lives as a fun food place once in a while.

For instance, the parfait above is a new addition to the food served in McDonalds restaurant. During the event, they had also introduced the fruit smoothies. I did not have a picture of the smoothies.

Chef Dan also said that the food made in McDonalds are “real food”. They use real eggs for their Egg McMuffin which they try to put across in commercials where they McD crews juggle the eggs. He was lamenting that despite all these effort, there are some people who still does not believe that McDonalds today uses real beef, real yogurt, real eggs and that their fries are now 100% trans fat free. Chef Dan also pointed that out that some of the most important members of his team in Chicago are the dietitians and nutritionists. He also hopes that people will just give McDonalds a chance and go into his restaurants and see the difference if they had never been there for years.

So where does Chef Dan see the McDonalds menu heading in the next 5-10 years? Chef Dan does not mention anything specific. I think he does not want to mention it for commercial reason. He did say that it takes 3 years to develop a single new product. Chef Dan has a kitchen next to his office and he is hands on. With his team, they come up with dozens of new ideas but only a small handful makes it at the end.

Chef Dan did say that he likes to see McDonalds offer more on the beverage front. That reminded me of the many free coffee campaigns that was aimed squarely at Starbucks. Smoothies, real fruit smoothies, is another thing that the company hopes will come along big shortly.

When I asked what new food trends in the gourmet foodie market are they hoping to implement, I was told that McDonalds will very likely not into gourmet techniques like sous-vide. Instead, they do actively pursue the use of trendy ingredients like lemongrass, chipotle and peri-peri peppers. Because of the vastness of McDonalds in having 140,000 restaurants around the world, they cannot be too niche.

I also conveyed what a chowtimes reader wanted to say to Chef Dan … that she “likes to see McDonalds keep moving towards healthier food and continue to stop pushing supersize fries; and it doesn’t have to be soy burgers.” Chef Dan said that they continually listen to what the customer wants and they do try to promote healthier options like having wholegrain buns.

But there is one thing Chef Dan wanted to make sure that we know … that despite all the effort to provide healthier option, he does not want the world to think that McDonalds will be giving up on burgers and fries.

I was thinking how influential a person at his position is. In many respect, he is the most powerful chef in the world from the standpoint that more people eat McDonalds food than anyone. A bit of an exaggeration on my part here … say, if Chef Dan decides that there should be ten additional sesame seeds on each bun, it would translate into serious dollars in the sesame supply industry!

I read somewhere that at one point, Chef Dan tossed the idea of adding shrimp to salads. But bringing in shrimp daily to every McDonalds restaurant in the US, it would severely deplete the country’s shrimp supply. Also consider the apple. When the fruit and walnut salad debuted in May 2005, McDonalds immediately became the No. 1 restaurant seller of fresh apples, using nearly 55 million pounds of apples that year, according to the US Apple Association. There you go! 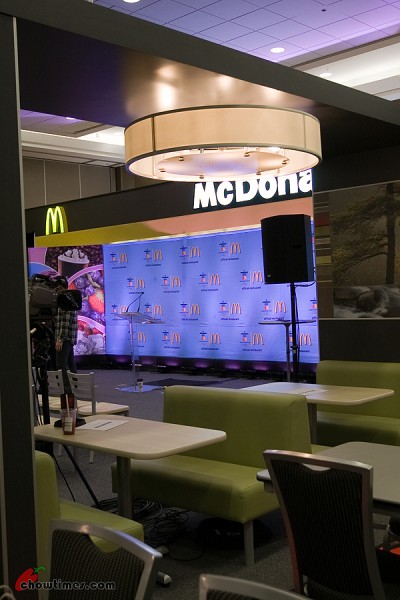 I enjoyed the interview with Chef Dan. He was pleasant and open. Knowing how graciously he reacted to my initial salvo, I felt kind of bad to tell the truth. As a person, he certainly did not deserve that from me. He did spend a lot of time with me. It was like 30 minutes.

Please do not hate me for speaking to Chef Dan of McDonalds. LOL!

And also please do not hate me for saying that I enjoy having a Big Mac every now and then.