We are going to start our journey of discovery of the Eight Great Traditions of Chinese Cuisines with the Hunan cuisine. I would like to take this opportunity to invite chowtimes readers to join the 8GTCC team in an authentic Hunan dinner on April 10th at the Alvin Garden restaurant. The details of the dinner are at the bottom of this post.

In the words of LotusRapper, the menu is considered festive and complete when the menu consists of at least one treasure from:

The discovery of the Hunan Cuisine is led by fmed who had spent countless hours doing research on the Hunan cuisine and carefully picked the representative dishes of the cuisine. This is of course well supported by the rest of team who had done its part in cross-checking information and provided valuable input in the research.

Alright. Here it is … Hunan Cuisine as presented by fmed:

Though Hunan cuisine (also called Xiang Cai 湘菜, after the river Xiang) has a long history spanning back over two thousand years, I just can’t imagine what it would have been like without the chili pepper, introduced into the region a mere 400 years ago by European traders. Hunan cuisine – one of the world’s spiciest – without the chili pepper heat? It seems unthinkable.

The chili pepper came to China from the Americas in the late Ming Dynasty (around 1600) and the Hunanese may have been the first in regional Chinese cuisines to adopt it. By the end of 17th century, the chili pepper became central to the cuisine.

Some of the oldest written texts about Chinese food culture were written over 2000 years ago in Hunan province, around the modern day city of Changsa. Back then, Changsa was one of the cultural centers of China known for its poets, artisans and cooks. Hunan cuisine is highly influential in Chinese cooking, but it plays second fiddle to the more famous, elaborate, and perhaps more sophisticated Sichuan cuisine.

In gastronomic terms, Hunan cuisine is often compared to Sichuan cuisine in its lavish use of the chili pepper. Sichuan and Hunan cuisine are both quite hot and spicy. The Sichuanese, however, use the palate numbing Sichuan peppercorn, and a number of special cooking techniques that tend to mitigate their dishes’ heat. When cooking, the Hunanese tend to use chilies as an ingredient more minimally, though resulting in dishes with a ferocity of heat unmatched by any cuisine in China or nearly any other cuisine in the world. (More on Sichuan cooking and its varied use of chilies later on in this series).

Hunan cuisine isn’t all hot and spicy: like all Chinese cuisine, the balance of flavours is critical. Some dishes are deliberately mildly spiced as a counterpoint to the hotter dishes.

Subtropical Hunan is a land-locked province in southern central China, and known for its high agriculture output and fresh produce. Hunan literally translates to “south of the lake,” a reference to Dongting Lake. Dongting Lake is where two of China’s largest rivers, namely the Xiang and the Yangtze, flow. Much of Hunan is a flood basin which accounts for its fertile soil and its historically agrarian culture.

It has four distinct seasons, with winters cool and damp, and summers humid and sweltering. The year-round availability of fresh ingredients gives the cuisine its freshness and colour. Chili peppers are, of course, a key defining ingredient.

Characteristics and Flavours of Hunan Cuisine

The following is an simplified overview; please refer to the Recommended Readings section below for a more complete look at Hunan cooking. 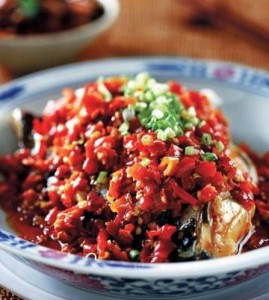 One of the most common condiments in Hunan cuisine is the tart, salt-pickled chili. This ingredient is used as a cooking ingredient and as a tableside condiment. Pickled chilies thus provide Hunan cuisine with its signature hot and sour flavour profile. The Hunanese incorporate chilies into their dishes in the form of their pickled peppers, chili pastes, and less commonly in the form of dried chili flakes, fermented bean-and-chili paste, and chili oil. The most common pickled-pepper is duolajiao 剁辣椒, a coarsely chopped and pickled red chili. The peppers are a completely edible component of the dish, rather than a mere flavourizing ingredient as in certain kinds of Sichuan cooking, where it is often not eaten. This accounts for much of the heat in the Hunanese food.
Saltiness is derived from the liberal use of salty pickles and variety of fermented beans and bean pastes. These fermented bean ingredients also infuse the dishes with a dark savouriness. The common salted black bean found throughout Chinese cuisine is thought to have originated from Hunan province over 2000 years ago.

One flavour that does not harmonize with Hunan cuisine is Sweet as the Hunanese have an aversion to any sweet and savoury combinations in their cooking. Except for certain exceptions (for example, the use of caramelized rock sugar to colour a braise), sweet-savoury dishes are not part of the Hunanese culinary repertoire.

The bacon-like smoked pork from mountainous western regions of the province provide a savoury smokiness to certain dishes. Smoked bacon is first steamed before incorporation into everyday cooking. Other commonly smoked ingredients are duck, chicken, carp…even tofu and bamboo shoots.

The Hunanese also use a limited palette of spices which they call … xiangliao 香料 (or “fragrant things”) such as fennel, star anise, cumin, and even Sichuan peppercorns. Of course, garlic, scallions, chives, cilantro (a very common herb in this cuisine), leeks, onions, soya, cooking wines, various fermented vegetables, bean products and other common Chinese ingredients are used extensively.

The surrounding provinces – namely Sichuan – have profoundly influenced Hunanese food (though the converse is also true: Sichuan cuisine owes a lot to Hunan) . The distinctly Sichuan fermented bean paste called doubanjiang 豆瓣酱 is very common in Hunanese pantry. You will find Hunanese dishes that use huajiao 花椒 (Sichuan peppercorn) despite its association with Sichuan cuisine. Even cuisines from the distant Western regions of Xinjiang have had a significant influence in Hunanese food.

The cooking techniques in Hunan cuisine run the gamut of stir-frying, steaming, braising, smoking, and many other classical Chinese cooking techniques. However, steaming (蒸, zheng) is the method most favoured by the Hunanese, followed closely by braising. A typical home-cooked Hunan meal is steam-cooked in bamboo steamers right in their serving vessel. The main ingredients are layered on top of each other, with pickled chilies and bean pastes topping it all off. Many of Hunan’s famous dishes are braised (for example, Red Cooked Pork, often called “Chairman Mao’s Pork,” after Hunan’s most famous son).

It is interesting to note that while stir-frying is known to Westerners as the most distinctive method of Chinese cooking, it is actually a fairly recent innovation. Steaming is perhaps the most ancient of all Chinese cooking methods and is indeed the most prevalent in all of China.

Alvin Garden (formerly The Xiang) is the rebirth of Crystal Hunan Restaurant on Kingsway. Crystal Hunan was known for its authentic and bold Hunan cooking, however, after a number of years in relative obscurity, the restaurant closed. Shortly after, the cooks and the back-of-house staff quietly opened the Xiang. After a couple of years of operation, the original managers and owners of Crystal Hunan rejoined the kitchen staff at the Xiang. The restaurant closed briefly for a week (which gave me a heart attack because I thought it was gone for good!) and it reopened under the unfortunate name of Alvin Garden. I have no idea where they got this name. (Confusingly, they still call themselves the Xiang on their business card and when they answer the phone).

The menu above may be tweaked. The costs of the dinner is expected to be in the region of $20-$25 per person (not including drinks other than chinese tea). We had made an initial reservation for 40 people. Depending on the response, we might need to cap the number of people for this dinner.

I had received many requests already for the dinner. Just to be safe and that I did not make any mistake and drop your name, could you please send your request to suanne@chowtimes.com with (1) your name, (2) the number of people in your party and (3) any dietary allergy concerns?

If you are interested to attend, please send in your request by Tuesday, April 6th.

Oh yes, one more thing. A filming crew from  a local TV station will be in attendance during the dinner. They are there to cover the dinner as part of the filming of a documentary about chowtimes. There is a possibility that the TV crew might request an interview with some of the diners (with expressed permission of course).

Let me know if you have any questions.