You guys are great, you know that?

I am just awed by all the comments you guys made on chowtimes these days. They are so long winded … and so informative that I am learning so much from it. Thanks a lot for taking the time to write.

I thought it was just a simple post I wrote about the coffee we had in Aoyama.  But boy, I did not count on so many people being so passionate about coffee. Well, this post is a little bit about some exotic coffee just to continue a bit on the topic of coffee. 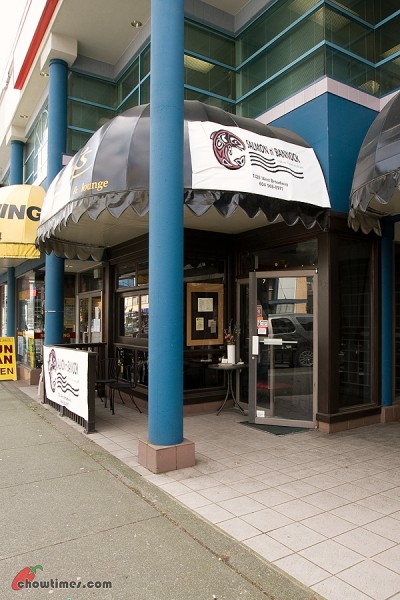 Rey had been a ardent supporter of chowtimes. I have to acknowledge that. When I mentioned about Kopi Luwak two weeks ago, he got someone in Manila to scour the city to bring over some for me. We met up last weekend so that he could pass me the prized Kopi Luwak.

Rey suggested that we meet at this new place he found the day before when he was in Toy’R’Us with his family. He said that this is a First Nation (Canadian for aboriginal) bistro. I had never had First Nation food before and so it was a no-brainer that we met up in Salmon n’ Bannock on Broadway.

Salmon n’ Bannock is located on the same block where Tomakazu is. They have been opened for less than 2 months and so there is just a banner in place of a proper restaurant signage.

Salmon n’ Bannock is a small cozy bistro with seats for about 25-30 people. It was tastefully decorated with many First Nations paintings adorning the wall. There are dream catchers and even a real canoe hanging from the ceiling!  Dream catcher … I just know that name but I do not know the significance of it in the First Nation culture.

The above is the Kopi Luwak. This coffee is the most expensive coffee in the world which goes for $500 per pound.

But this one is the cheaper version of the Kopi Luwak which also goes by the Filipino name Cafe Alamid. This is truly one exotic coffee. The beans are produced by coffee beans that had been passed through the digestive tract of the civet cat … and properly washed of course. LOL!

Yesterday I was reading your responses to the $9 Blue Mountain #1 siphon coffee in Aoyama. On wikipedia, I found out that a cup of Kopi Luwak went for $33 in Australia. In another instance, a cup of a blend of Blue Mountain and Kopi Luwak costs $99 in London. Interesting, huh?

I am gonna organize a coffee tasting session for this Kopi Luwak after I get the 8GTCC Hunan dinner out of the way. Stay tuned for details. 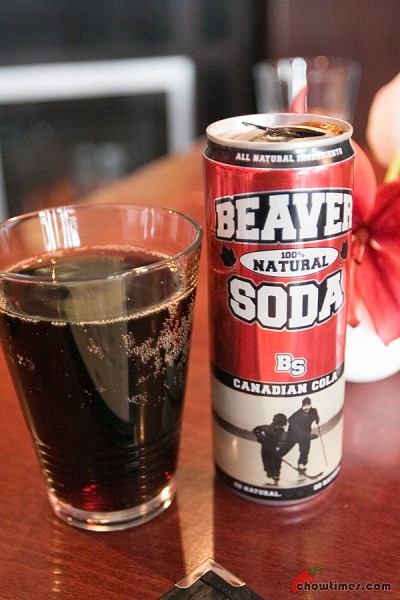 We had an all Canadian Soda. When I asked for a First Nation type drink, I was told they did not have any but they have Beaver Soda adding that 90% of everything they serve here is Canadian.

I had never heard of Beaver Cola before. This is $3 and is labeled as All Natural. This means that they are micro-brewed and they do not use cheap high fructose corn syrup like they used in other colas.

Suanne and I started off with sharing a soup which has an interesting name … the Three Sisters’ Soup n Bannock ($6). It is a homey kind of soup, light in taste and definitely very healthy.

The “three sisters” refers to butternut squash, potatoes, corn, and green beans. All these three are grown together by the First Nation. The beans climbed on the corn stalks and returned nitrogen to the soil, and the low-growing squash vines shaded all the roots and kept weeds from sprouting. Very interesting.

The above is Bannock and pronounced as Bannick. Bannock is a very common flat bread within the native communities throughout North America, even with the Inuit.

The bannock is crispy on the crust, not hard. Inside, it is soft and not dense. The recipe is simple and includes flour, baking soda and water only. Traditionally, Bannock is pan fried but it can also be oven baked or roasted over fire.

The menu is light and at a glance the prices are set quite reasonably. I think there is a slight premium on some of the items but we also understand that they are uncommon ingredients used. Like for instance …

… the $16 Wild Deer Stew n Bannock which Suanne had. The deer meat is lean and chewy which I kind of like. Suanne did remark though that the soup is quite bland. I think this is coming from the fact that we are used to the more intense Asian tastes and flavours.

The stew has carrots, potatoes and celery. It looked deceptively light but is actually very filling.

Each of the main is accompanied by some Bannocks and a bowl of salad. The salad was good. What we like was that the dressing for salad is made with raspberry and blackberry.

Me, I had the Chili Bannock with Wild Buffalo ($12). This is like any chili bowl you are familiar with except that it has … buffalo meat. The buffalo meat is from the prairie and chili is southern American.

The buffalo meat is high in protein. This is more flavourful than the deer stew.

Rey had the Wild Smoked Salmon Platter ($10). There isn’t a lot of smoked salmon here. I felt that word platter is used wrongly in that it conjured image of a large serving. This looked more of a snack than a platter. It does look good but I did not find out how it was. I know Rey checks chowtimes regularly … so, how was it Rey?

We also tried the Wild Buffalo Burger on Bannock ($15). Sandwiched between bannocks instead of the regular bun, there is this lean and thick wild buffalo patty. I guess you can imagine that lean meat like this makes the burger not moist and juicy like most gourmet burgers. A dash of mayo and mustard will moisten it a bit.

When I asked for the bill, it came nicely presented in a box with First Nation motives and with some candies in it. I gave each a candy and then as I fish out my wallet, I saw this note …

I did not even expect it at all and asked that we are billed. Remi, the restaurant manager smiled and just thanked us for coming in and that we give him a honest feedback. The restaurant was not busy and I guess it was because I was taking pictures, Suanne was taking notes and we were asking a lot of questions. The restaurant manager did not know who we were and we did not tell him. I thought I make this open and clear because this sort of things is an issue with some chowtimes readers.

If you had never tried First Nations food before, this is a good place to experience it. The kitchen is staffed with chef of first nations heritage. They make the food the way it is supposed to be made. I think they should remain true to the cuisine and do not be pressured to make changes just to cater to the palate of the customers.