I was so impressed.

For followers of chowtimes, you know I am bored with the regular dim sum fare. Har Gow, Siu Mai, Char Siu Bao and such just does not excite me at all. I love it when I go to dim sum restaurants and get myself simply bewildered by the menu. 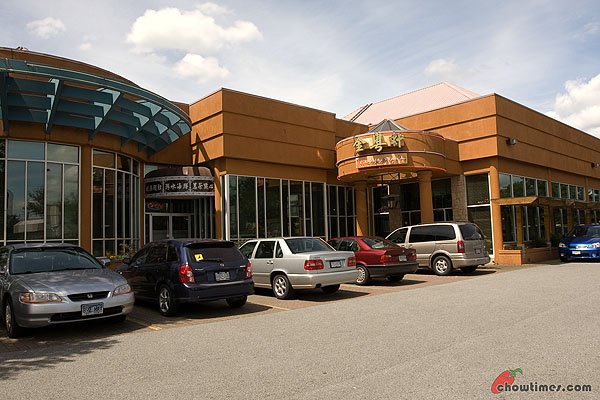 The Empire Chinese Cuisine is one such restaurant. It is located at the western end of Alexander Road in Richmond and in its own grand building. You can never miss it.

This was the first time we ate there. Even though they have a large car park of their own, we had to wait a bit to get a spot. We were just surprised that for an exclusive use car park that size that it could be so full. 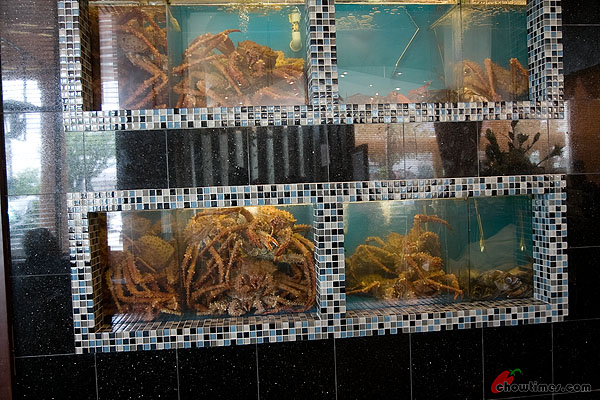 Walking into the restaurant, we are just confronted with tanks of Alaskan King Crab. Have you ever seen so many at one place? Not me.

Experts out there — I thought that the King Crab harvesting season is a short 1 month period in winter. Why does Empire still have so many up till now?

The Empire Chinese Cuisine had just won the award for the Best Cantonese Dim Sum award this year. I can see why. Reservation is recommended here for sure.

The dining hall is like a market. Very loud and very busy. While this could be unsettling for a western customer, for me this is how it should be. LOL!

This restaurant is well staffed. The captains (and they are lots of them) are suited. You still got to flag them down most of the time but at least they don’t look at the floor or the ceiling all the time. Just don’t expect the “Wonderful morning, isn’t it? How are you all doing today? Good … good” type of service.

The captains and waiters are on a mission. See the video I took above. See how serious they are in setting the tables. They were literally throwing the platings around and making such a din that I whipped out my oft forgotten Flip and took a shot of them at work. They sometimes do this in front of you. Just don’t take it personally that they don’t like you or something like that. Like I said, they are on a mission.

I would describe that service is abrupt and can be perceived as curt. They might not smile and so don’t take it personally. And despite how busy they are, you can be quite confident they don’t forget what you ask. 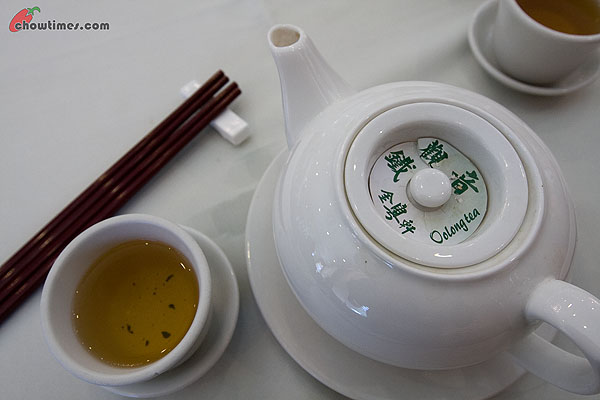 A few other quick observation. We like that they label the tea pot, I thought it’s a nice touch. The tea cups are served on a saucer and that is also a nice touch.

They even gave us double set of communal chopsticks too even though it was just Suanne and I eating there on that day. Most restaurants will give you one even for a larger table.

Suanne and I wanted so much to just try the specials but we are here for their award winning dim sum item. We will come back some other day for this for sure.

You order the dim sum from an order form … there are no push carts here.

Their dim sum ranges from $2.95 to $7.45. So, this is on the high side for dim sum. However, we don’t feel that it is too expensive given the quality and all.

Deep down, this is a very Chinese restaurant catering for a largely Chinese clientèle. Even though the captains speak English, we think it will not be easy for people who are not familiar with the food to order from this order form.

The CRA listed this simply as Deep Fried Seafood Dumpling but to Empire Chinese Cuisine, they call this the … Deep Fried Taro Dumpling with Assorted Seafood. Again we had to point to their award certificate on the wall to ask which item it is on the menu. I think the problem with the CRA’s list is that they list the award in Chinese and then do their own translation directly from the Chinese name of the dish. So, the names on the menu and the CRA list does not match and causes a bit of a confusion. Here is another recommendation for the CRA folks — to make the certificate larger and include a picture of the dishes too. That will surely catch the attention of diners better.

The Deep Fried Seafood Dumpling ($4.75) won silver. We love the simplicity of the presentation. A little red cherry and green cilantro in otherwise plain taro dumpling.

Mmmm … this whole thing is so soft and so brittle. We were surprised how they managed to keep it all so together because the moment we touched it, the coating just crumpled. Just look at the coating (or whatever you call that). It was not oily at all despite this being deep fried.

The taro is very soft. So soft it is custard like and creamy. It has a mild curry flavour. I can see why this won silver — this needs “kung fu” to make. It is the creaminess that make this stands out from the way the other restaurants make it. After all, this is quite a common dim sum item. 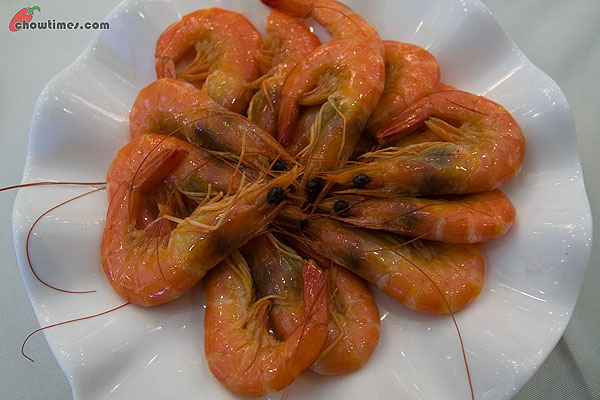 Of late we love shrimp. We had been looking for shrimp in the menu. The Spicy Cold Shrimp above is $6.45. 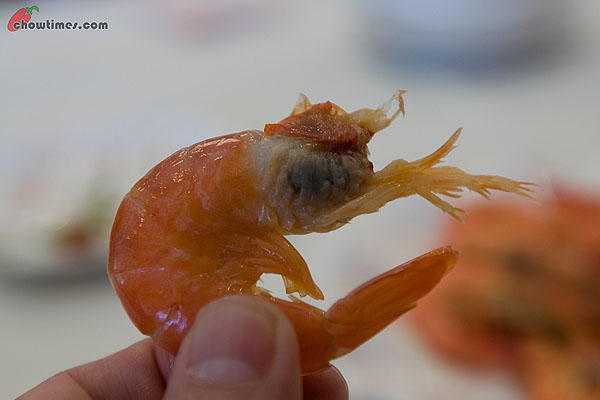 They are not very big. With the head and shell on, this is one you eat with your hands. Suanne was commenting that I had been eating a lot with my hands these days. I think she is right.

The shrimp sure tasted very fresh and the slight spiciness added a good twist to an otherwise sweetish shrimp. 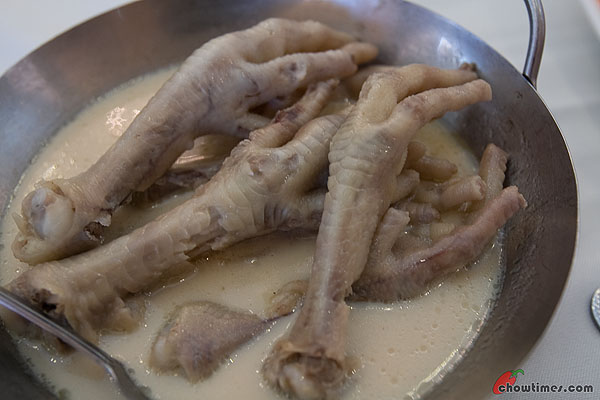 Chicken feet is common but for Chicken Feet with Pepper Soup ($6.45) … now we are talking!

The rest of the world does not get eating chicken feet … and I think they never will. They say there is no meat but there is! You just got to work harder at it.

The soup was what we were looking for. It is milky and mildly peppery.

But it also quite salty too. So …

Chinese Cheese? Know what that is?

I don’t think Chinese traditionally eat cheese. I think it’s in the genes that they can’t tolerate cheese. LOL! That is why milk is not often used as an ingredient in Chinese cuisine.

We ordered the dish above because of the name … Deep Fried Chicken Knuckle with Chinese Cheese ($6.45).

Lovely. The so-called Chinese Cheese is actualled fermented bean curd. It has a mild flavour and not overpowering.

It is basically meat and cartilage and eating this is very much an exploration of contrasting texture and flavour.

We also ordered the dish above because of the name … Seafood Salad on Papaya Boat ($6.45).

Very nice. It came with smoked salmon on the side. Served on a half Hawaiian papaya is a delightful combination of prawn, cantaloupe, honey dew and mayo.

It is served cold and very refreshing. The flavour profile is sweet. The sweetness came from the papaya and fruit while the smoked salmon and mayo gave that extra twist to an otherwise fruit platter. A nice combination of fruit and seafood. 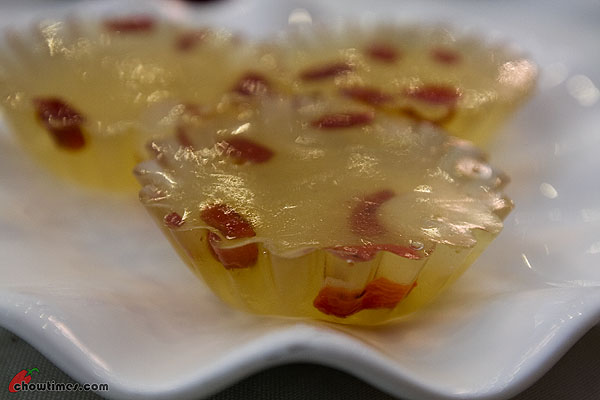 The Chilled Pudding with Dragon Eye Fruit and Wolf Berries was $3.65.

We wanted to try the dessert that we saw on our neighbor’s table. So, we ordered this despite we were quite full already.

It does look pretty if I may say so. It is lightly sweet and had a distinct chrysanthemum flavour to it.

We had the “Chinese Cheese” to go. 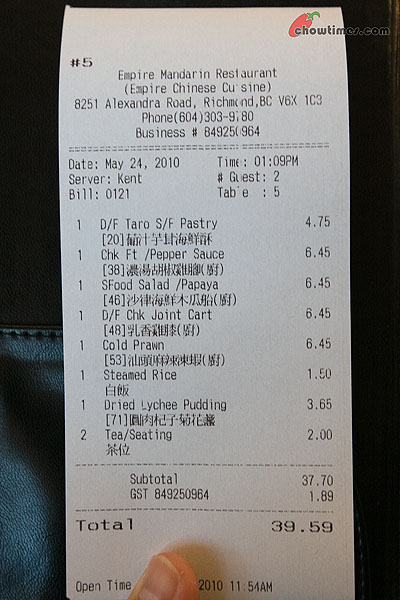 The prices in Empire are on a high side. But it is worth every penny. I was quite impressed with the dim sum here. There are a lot more to explore on their menu. So, if you are bored with siu mai and har gow like me, I think this place is worth checking out.

To Hahna who wrote to me asking me to vet her culinary itinerary on her first visit to Vancouver, this is the restaurant I am talking about.

Tropika in Richmond with ChubbyPanda