Updated: 3rd Nov 2014; This restaurant is closed according to Urbanspoon.com.

Many of the restaurants are small hole-in-the-wall types that hardly registers on the radar of foodies. I am not surprised because many of them does look run down and in dire need of a coat of paint.

The Pho Thuan Ann restaurant is one such restaurant that I would not have chosen to check out on my own. The restaurant, located on Kingsway near the intersection with Fraser, is unremarkable in many ways. Worse still, it is somewhat blocked by a tree that most people will not even know that there is a restaurant in the location.

Even if it is not blocked by the tree, I find that the red letterings on the window does nothing to call out the restaurant at all. 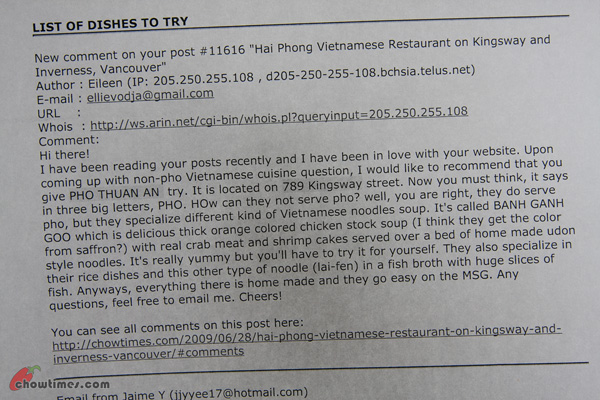 Eileen alerted us to this restaurant. If this had just been a regular Vietnamese restaurant serving Pho, we would have put this down low in the restaurant to try. We are just bored with Pho.

Our favourite Vietnamese restaurants are places that serve different types of noodle soup. We like Thien Kim on Nanaimo , a place where we had four different types of soup noodles and none of it is Pho. We also like the excellent Chicken Noodle Soup from Lam Hoa Quan on Victoria Drive.

So when Eileen called out the “Banh Ganh Goo which is delicious thick orange colored chicken stock soup”, we simply made our way to the restaurant the first chance we had.

We tried to look for any reviews on the internet for Pho Thuan An. We couldn’t find ANY at all. 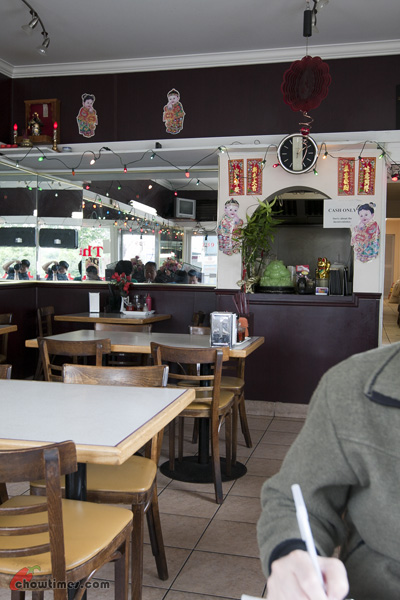 Thuan An is a small family operated restaurant with about 30 seats. We were attended to by the lady owner who immediately took notice of our camera. She is so down to earth … without any hesitation, she asked which paper we are with. Most restaurant will just take notice and let us be alone. But this lady owner is engaging and genuinely friendly.

On the decor, it is nothing much. Pretty much everything you see here is showing its age. It doesn’t bother us really. Places like this has its own charm. The place does look bigger than it really is because of the wall of mirrors. 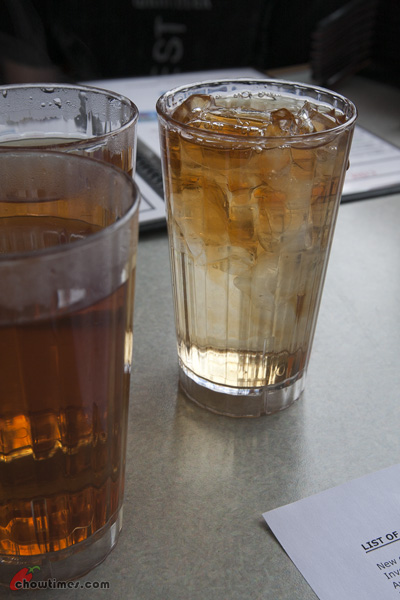 Tea were served promptly. I thought that the iced Chinese tea above is kind of weird. I was beginning to think that this is made of some powdered tea of something. I know a lot of places do not serve real good quality tea but am now curious how restaurants save on tea. Like … do they serve colored powder “tea”? 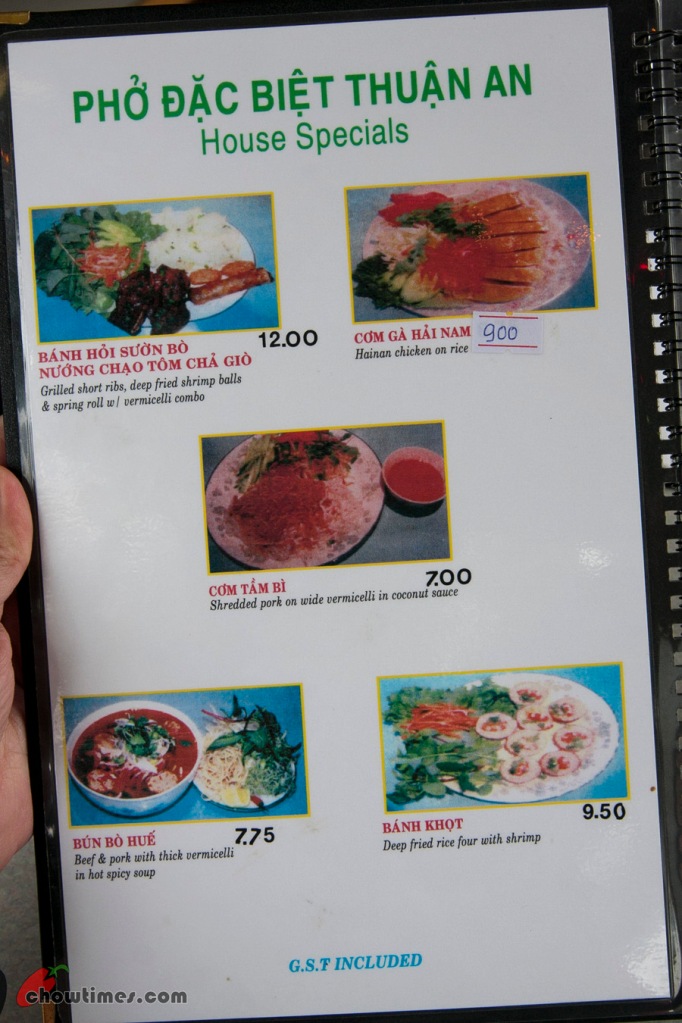 I like their photo menu, especially the two pages of House Specials. [You may click on the menu above and below to show a larger image]. There are a number of dishes that are new to us — all of them non-pho specials. It even has Vietnamese style Hainanese chicken, an obvious influence from Vietnam’s proximity to Hainan in China. So it was kind of hard trying to decide what to order for the three of us.

The prices is just about average and in line with the menu you find in most Vietnamese restaurants. The prices hovers around $7 to $8 for rice and noodles dishes with only two dishes at the $12-$13 range. It is the wide variety of Vietnamese food that is the best thing of their menu.

The lady owner told us that they had been operating for six years already. Most of their customers are people who live in the neighborhood. I understand that because they are relatively unknown.

It is certainly a neighborhood restaurant when the customers and the owner chat to each other in Vietnamese. Everyone seems to know each other. Why, even a family who sat next to us chatted us up! And the customer is even very open with us — even telling us the story of how they escaped from South Vietnam when the country lost the war to the north  and how they became boat people, spending 4 years in camps before coming to Canada. Only in a place like this!

Eileen recommended that we get the Banh Ganh Goo. We looked all over the menu but we could not find it at all.  Apparently it came by another name on the menu. It is called Banh Canh Tom Cua Gio Heo. I was wondering why it is known as two names. Is there someone who knows Vietnamese able to translate the names for us?

A bowl of this is $8. We were told that this is actually soup made with … chicken but it is just that it is thickened somehow. From the color of the soup, Suanne was guessing that the orangey color came from Annatto seed. The lady owner confirmed it. Suanne’s a smart girl. I have never heard of Annatto seed ever in my life.

The lady owner proudly told us as she delivered the noodle that she made the soup daily and she serves limited quantity only. So, I guess if you bent on trying this, you should go there early or phone ahead or something.

I like the above. It is made with shrimp and crab paste. I tried asking more about it but the Lady Owner was having a hard time finding the words to explain it that I just said it’s OK. 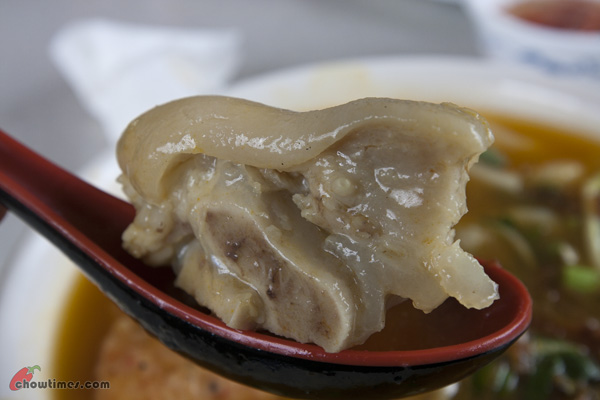 The pig feet is nice. I like this but it is a bit small. 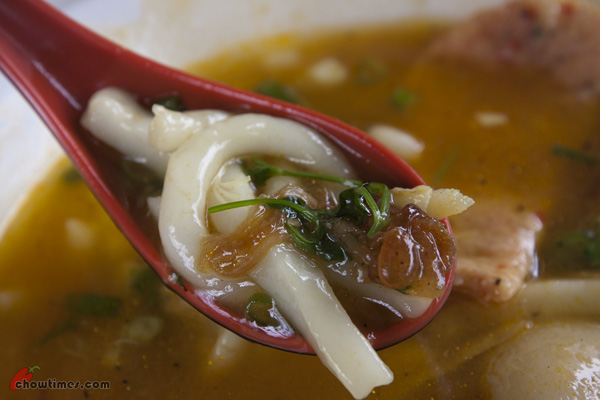 The noodles is the udon type. The dish is garnished with fried shallots and cilantro which gives each bite a potpourri of flavours.

[Eileen: Good recommendation! We enjoyed this bowl of noodles] 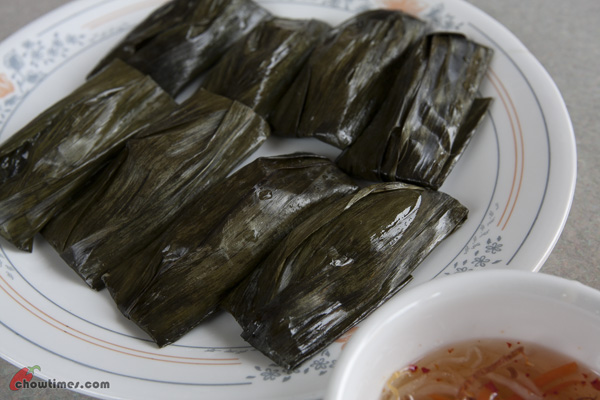 From the House Special menu, we wanted to try something called the Banh Beo (steamed rice cakes topped with green bean paste and dried shrimps). However, the lady owner told us she prefers that we try her Banh Loc ($7, above). The way she came across to us, we could see that she was pretty proud of this saying that “Banh Beo is good but Banh Loc is the best”.

It is steamed tapioca dumpling stuffed with shrimp and pork and wrapped in banana leaf. The dipping sauce is a vinegarish sauce.

While it wasn’t bad at all and has a strong black pepper-y taste, it was just OK as far as we are concerned.

Nanzaro had the Bun Bo Tai Huet Gio Heo ($8). What a long name. It has rare beef, pork balls, pork blood and pork feet with vermicelli in spicy soup. Nanzaro likes it. He ate everything but the pork blood. It’s an acquired taste which all of us in the family has yet to appreciate.

We ordered the Egg Yoke Soda with Condensed Milk ($4.50) too to try. It was just passable. It tasted more Soda than condensed milk or egg yoke. The cup already came full and on the side is a can of left over club soda. So, it is good enough for two people (to share, that is). 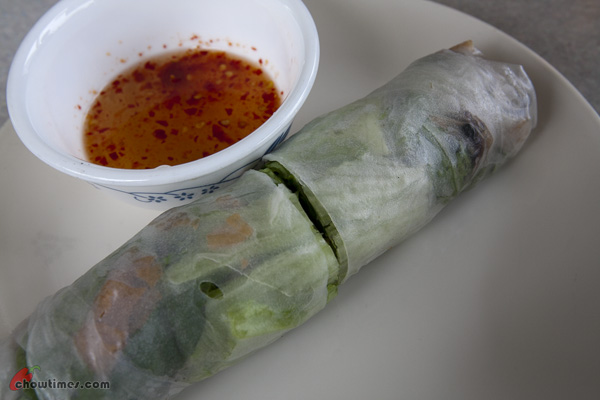 The lady owner brought the above for us to try — it is complimentary. She said that she makes this for her special customers only. She has a way with people. I was charmed. LOL!

This is called Thit Cuan or Grilled Minced Pork Roll on the menu and is served two pieces for $6.

It is a tight bundle of grilled pork spring roll. The pork was crispier than I expected.

It is great. It came with a sour sauce which combined really good with the rolls. If we come back again, we will certainly order this. If only she gave us a full serving of two rolls … 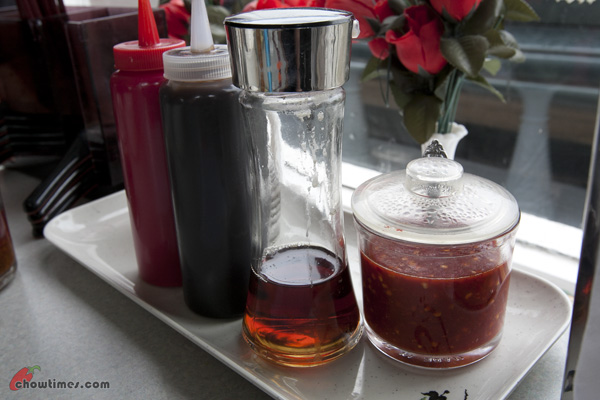 The bill came to $31 including tips. So it is pretty cheap dining for three people.

As expected, Pho Thuan An accepts cash only. They are closed on Tuesdays.

This neighborhood restaurant is worthy to be supported. The unique menu is worth checking out for those of you who are out trying all kind of food. We like the restaurant and the lady owner who we connected well to. As for the food, the orangey chicken noodle soup is fantastic and you should also give the Grilled Minced Pork Roll a try with the sourish dip.

Ignore the word “Pho” in their name and checkout their other Vietnamese goodies.