It was Wils who told us that Five Guys opened their second outlet. And I knew it was where we wanted to bring the boys to because they love burgers. OK fine … they don’t like that mum and dad always brings them to Asian restaurants.

This time I did not tell them where we were going out for dinner. I just told them it is a long drive and that we are going to Surrey.

“Surrey?!?” they both exclaimed, knowing Surrey is the direction to the Canada-US border.

And then I had to get lost on the way. The iPhone battery died and I was relying on that for navigation. So, I went round and round until I found 160th Street. To them it was not funny. 🙂

I had never been to this part of the world before. I mean, I drove past this place on the way to the US border crossing. I am just impressed how built up this whole place is. They have every big box stores you can think of.

When we arrived, they were happy to see that it’s a burger joint. At least it is not another Asian restaurant after driving so far.

Have you ever seen the video above before? It is not surprising that Obama goes to Five Guys for burgers since Arlington (minutes away from Washington DC is the where Five Guys first started.

Anyway, take note of Obama’s order number at about 1:20 into the video.

For a supposedly upscale burger restaurant, the decor is a bit sparse. The whole theme is blood red and white with double checkered motifs.

Like in most Five Guys restaurants, they stack bags and bags of potatoes and boxes of peanut oil in the dining area. 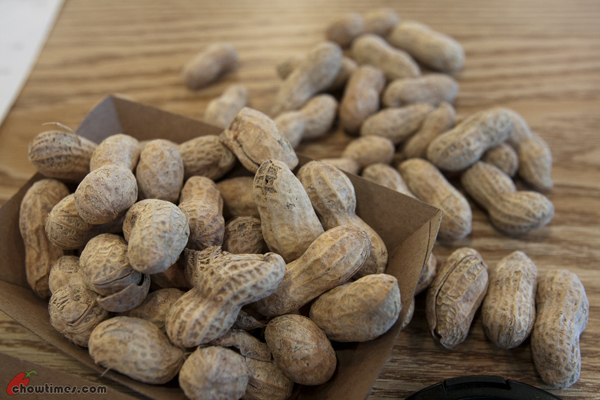 Unlike other burger places, they have free peanuts which is stacked inconspicuously on the boxes of peanut oil. They are meant for you to snack on while you wait for the burger to be made. I think it is a good idea.

The peanuts are salted. Nice but I had better, crunchier ones. Am not complaining though since they are free … sort of.

Click on the image above to enlarge the menu. It is a very simple menu … but kind of expensive.

You get either the plain hamburger, with cheese and/or bacon. The standard size is double patties. The “little” ones are single patties.

It is the toppings that is kind of wild. They have 15 to choose from and they are free with the burger.

The ones that they call “All The Way” includes Mayo, Lettuce, Pickles, Tomatoes, Grilled Onions, Grilled Mushrooms, Ketchup and Mustard.

Then there are the “Everything” which also includes Relish, Onions, Jalapeno Peppers, Green Peppers, A1 Sauce, BBQ Sauce and Hot Sauce.

I don’t know about you, but for me it is too much to think over each and everyone … same goes for Suanne. We just ask for EVERYTHING. Arkensen and Nanzaro is more adept in choosing the toppings. They just choosed 4 types of toppings. I just had to tell them “get everything, they’re free”.

So the above is our order. Four burgers, a large fries and drinks came up to $45. I dunno … I find it expensive for burgers.

So after placing the order, the protocol is that you take some of the free peanuts and wait at your table until they call your number. 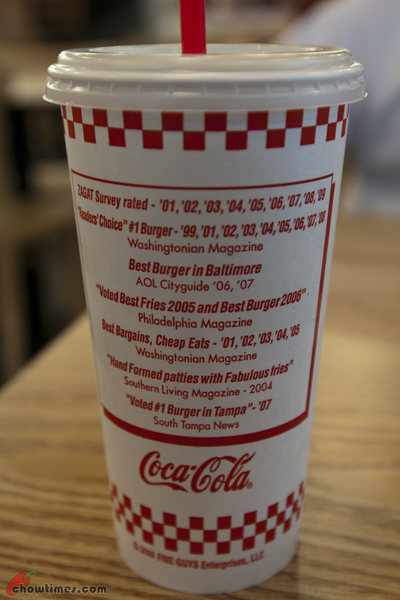 Get the regular size one. It is free refill anyway. You basically pay $1 extra for a larger cup.

I was not thinking straight or I would have ordered just one regular drink and have the whole family share it.

Just kidding. Nanzaro and Arkensen will never want to share anymore. When they were younger they did not even care. Not anymore … they are no longer our babies. 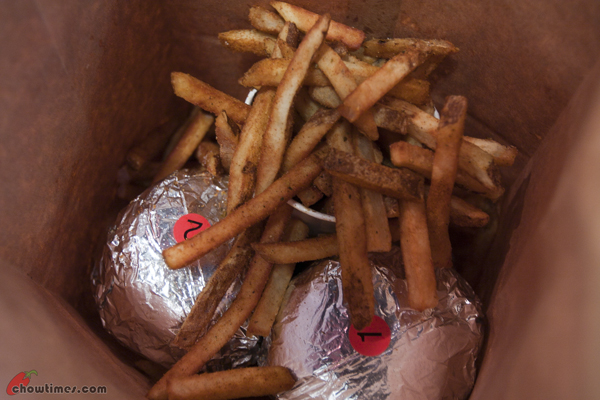 They called our number. I went over to collect and just at that point they put a few scoops of fries right into the bag … OVER THE BURGERS!

What a mess. But I guess they think it’s cool. Not me. 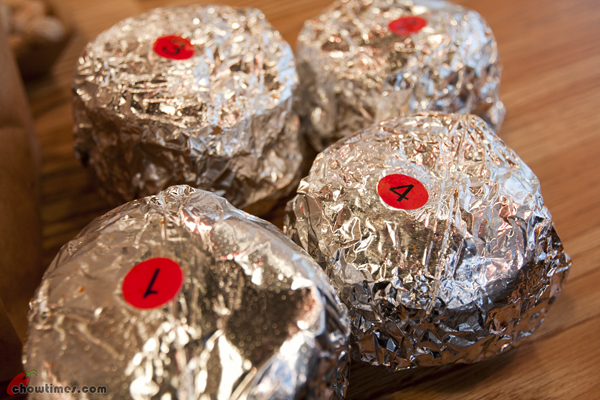 The burgers are wrapped nicely in foil and are numbered. So how do you know which belongs to who?

There you go … the printout tells you what each burger contains. Ours were easy to figure out but I can imagine if there are more burgers or the toppings are very different, it will take a while to sort this out.

The bun is softer than normal. I like the soft crumbly look of it although it is kind of soggy if you leave it in the foil wrapping for too long before you open it up. 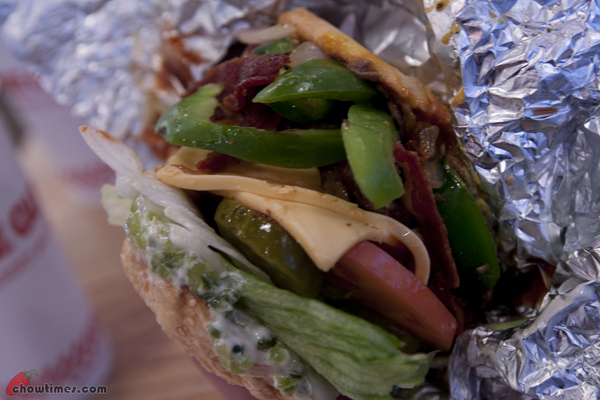 The above is mine. There are too many toppings (15) to be able to see where the patty is. I basically were tasting more of the ingredients than the burger!

The ingredients were fresh and crisp but I shouldn’t have asked for everything. What I like best was the jalapeno peppers — very very spicy. 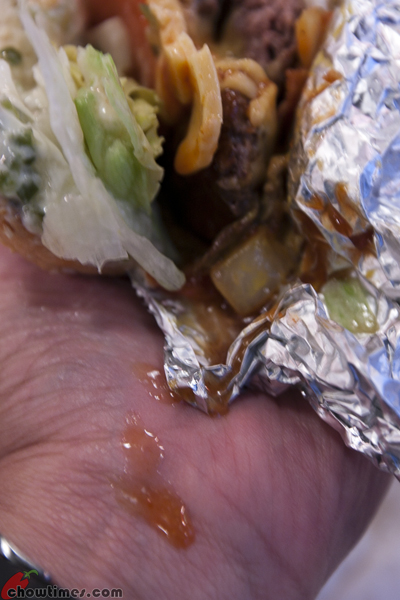 So you can imagine it was very messy because all the sauce were dripping everywhere and the topping were falling onto the table. If not for the foil which held everything together, I would have to ask for a plate and eat it with a fork.

But I like the burger. Everything about it is pretty good … from the bun to the meat and the fresh vegetables. It was a big burger.

It is also an extremely unhealthy burger. You know how many calories there are in the burger I had?

They do try to put a positive spin on their burgers as expected. They claim to use only fresh ground beef and that they do not have any freezer in the premises. They also say that they uses only peanut oil and are totally trans fat free. If you are allergic to peanuts, you are better off avoid Five Guys.

They made sure you know that they are “cooked in pure, no cholesterol tasty peanut oil”.

The fries were crispy when it first came out but became soggy sitting in the bag while we ate the burgers. We should have taken them out of the bag instead of sitting in there.

We had the cajun seasoning. 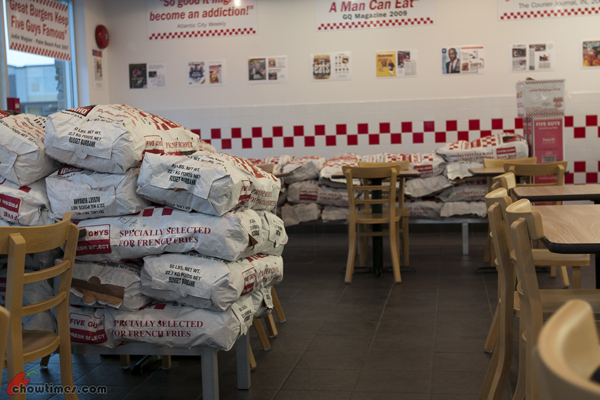 We were all very full as it is a lot of food. The burgers were quite good except that I thought it was expensive despite the FREE peanuts, FREE toppings and FREE refills.

I heard that they are opening the third restaurant in Langley very soon.