Updated 31st Oct 2014; This restaurant had moved to a new location as per the address on Urbanspoon.

We had been planning for this on and off for quite a number of weeks now. We had been saving this place up to check it out with a group of people. This is because (1) Sea Harbour won two CRA awards for 2010, and (2) it is kind of an expensive place that, well, will be kind of lost on our boys.

I finally managed to get this going after a couple of tries. 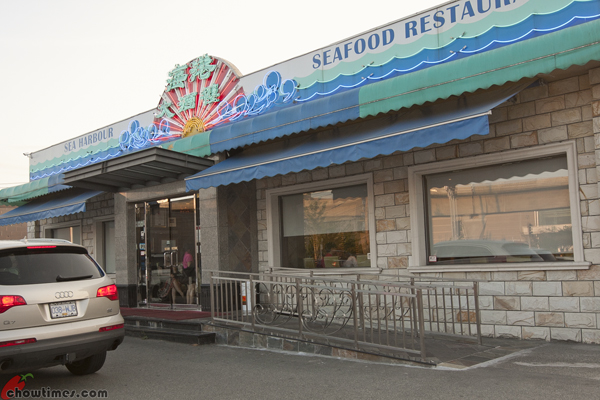 Sea Harbour is one of those restaurants in Richmond where you see the parking lot with highest percentage of luxurious cars. The parking lot is big with some more lots around the back of the building. But even that it is full during peak meal times.

One option is to park across the street in Yaohan Center but be warned. If you are forced to park there, you should pretend to walk into Yaohan Center before you head across the street. There are people who look out for cars to tow. They make a lot of money doing it and trust me, they are very efficient. Best way is to park, go in one entrance and go out another. Those lookouts are smart about people walking in and out already.

Anyway, the Yaohan Center parking is just as hellish. So, really the best thing is to go as early as possible.

And that is what we did. Dinner was at 6:00PM and the parking lot was empty. 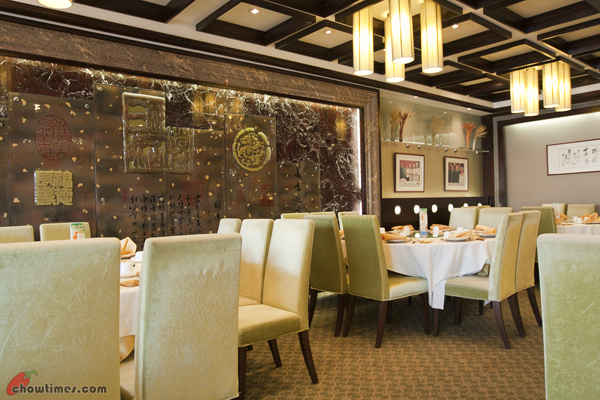 The interior looks grand and quite tastefully decorated. It is festooned with gold everywhere. No real gold of course but the decor shouts opulence with chairs upholstered in gold fabric, newish looking carpets and tables with double table cloth.

We had been here before. For dim sum. As a mere salaryman, I can’t afford to bring the family here for dinner, not all the time. 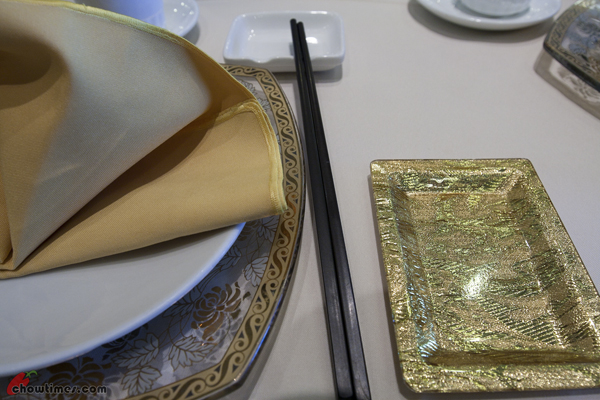 Service is impeccable. The captain, manager or whatever they call the senior guy is professional and polite. You know, this are the kind of place where they change your plate very often … and they do.

Looking at the menu, I was thinking … OMG, did I make a mistake in organizing this dinner. I mean, we could easily spend half a month’s dine out budget eating here.

Yeah … a dish costing $16.80 is considered cheap on their menu. You should have seen their other pages. No, I did not take pictures of the entire menu. I had to pretend to maintain dignity by not taking too many pictures.

Anyway, as I was saying, I was going to come here to try their two award winning dishes. Sea Harbour won:

I really was set getting this. The day before the dinner, JS was warning me that the prawns could be expensive since spot prawns is out of season already. Yup, it turned out that it was more expensive. 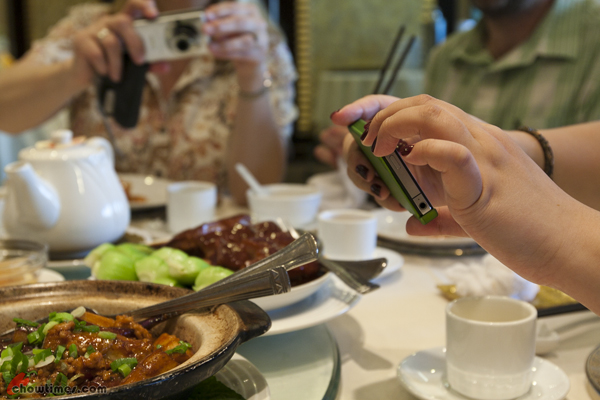 This is kind of how it was at our table. Someone told me (or maybe I read somewhere) something funny. I can’t recall who, when or where. A blogger was dining somewhere and was taking pictures. That drew a comment from a customer saying that “back in his days, people take pictures of pretty girls”!

Isn’t it quite the norm these days? I see a lot of people nonchalantly taking pictures of their food in restaurant.

Did you also notice that it is mostly the girls who takes pictures of food? Right? Somehow it is cooler for girls to take pictures of food. Restaurants tolerate that. For guys taking pictures, the restaurant thinks we are spies or a competitor … especially those with big SLRs.

So it was good dining with bloggers. ALL of them understand protocol. Oh yeah. Pictures first … don’t touch the food until the last camera had been put down.

So we had a few foodie bloggers in attendance … the inseparable JS-TS, the globe trotting ET and Christina and the omnipresence Grayelf. Gracing the event too is a foodie from New York, Eunice. She has a blog but it was last updated almost 1 year ago. But she has something new up her sleeve which she describes it as a “pandora for food”. 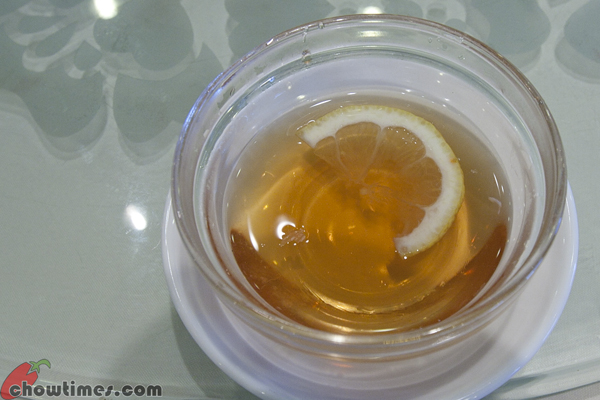 Meal started off with some lemon tea. Full compliment of the restaurant. Served oddly in a bowl not a cup, they only gave us two.

Everyone was too shy to drink it. I think everyone thinks that it is meant for the most senior on the table and no one wants to have that honour.

They already know we wanted the Pan Fried Prawns with Soy. I called the previous day to make sure that they have the two dishes and have them reserved for us.

So they brought the prawns to the table — live — for us to inspect before bringing back to the kitchen to cook. I should have taken a closer look but am a noob at these things. So I said, yeah OK.

Tell me … what do you look for when they bring live seafood to you?

The reason I asked you that question was … I was quite disappointed with the dish when … I saw it served. While a few prawns were big and nice, most of them were disappointingly small. I would call them shrimp!

Just to remind you … this is the GOLD award winning dish. 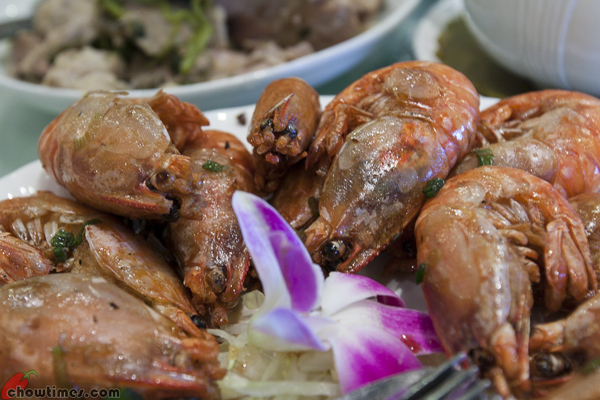 Mind you, some of the prawns are big. Like this monster one I had.

You know, I think prawns from North America is not as delicious as those in Asia. I mean the meat is more flavourful. But having said that, the spot prawns here have the best head. Very big and I eat them whole if it is deep fried. Awesome.

He he he … I scored one that had the eggs. That made me a happy boy.

In my opinion, this is not as good as Koon Bo’s which I enjoyed a lot more. Sea Harbour’s is just not as crispy and as caramelized. Check my post on Koon Bo here and see what I mean. 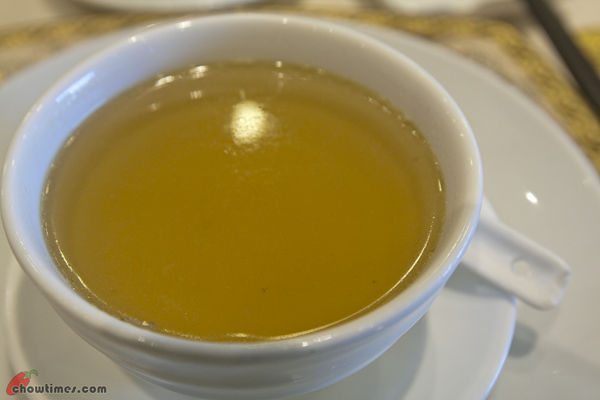 We also had soup. It is the Water Cress Soup with Pork. As per expensive places, they brought the whole pot to the table to show us and then take it to the side to serve the soup in smaller bowls. The soup does smell heavenly. It is a very clear tasting soup … no nonsense with stuff and all … just pure clear delicious tasting soup.

The pork and water cress vegetable is served on a separate plate. This is my kind of thing and always enjoys this when Suanne makes it at home.

The problem is, you gotta eat this very fast … while it is still hot and moist. It gets dry very fast and it become … urgh.

A dab of soya sauce is what I eat this with.

After this dinner, I asked Suanne to make this at home. She snapped at me saying “you’re crazy … you know how hot it is to make this?”.

I guess I gotta wait till winter to enjoy this at home.

The globe trotting member of the table said that we should order the Sea Harbour Assorted Cold Cut Platter. It is a cold appetizer. 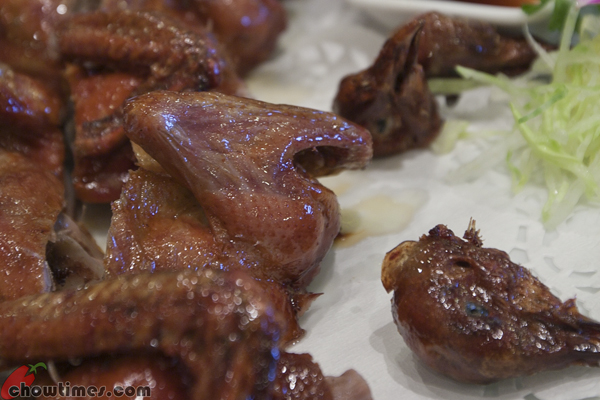 JS ate the head. I have never attempted this before.

I need training, JS. Can you explain how to eat the head? LOL! Like where do you start off with first … which part is edible and which is not?

I can’t help but compare this with Koon Bo. Firstly it is smaller. Not much meat but at least it was not as salty as Koon Bo’s.

This is the pick of the omnipresent Grayelf. Stewed Pork Belly with Soy Sauce and more affordable at $14.80.

The sauce gives this dish a sweetish taste and to balance out the richness of the sauce is the bok choy.

This always had to be served cut into 1.576 square in dimension. The top part must be 51% fat and bottom must be 49% part lean meat.

OK, I made that up but I think you know what I mean.

I just checked Wikipedia and it has the following to say about this famous Chinese dish:

Legend has it that while Su Dongpo was banished to Huangzhou, in a life of poverty, he made an improvement of the traditional process. He first braised the pork, added Chinese fermented wine and made red-braised pork, then slowly stewed it on a low heat. This dish was first launched in Huangzhou, then spread to Hangzhou, the capital of the Southern Song Dynasty, flourished, and then became one of Hangzhou’s most famous dishes.

Can you think of any dish more lethal than this one?

The Stewed Eggplant with Spicy Fish Sauce in Casserole is another “cheap” dish we ordered, $15.80.

It has minced pork and is good with steamed rice. The pot looks kind of like they came from a outdoor eatery … it just stood out like a sore thumbs amidst all the gold (color) in the restaurant.

The Beef Stir fry with Pea Sprout is $21. It has straw mushroom. The beef was tender. We like the tender pea sprout which is without hard stem.

Yeah, it is good.

I can’t come to places like this often. That’s OK because while the dinner was good, I just did not think it was $300 good.