Let’s take a closer look at one of the lesser provinces in China.

I am talking about the province of Yunnan.

Here. See the map. Yunnan is the southern most province and it borders the South East Asian countries of Burma, Vietnam and Laos. If you are familiar with geography in the area, it is green and forested … more forested than anywhere else in China. 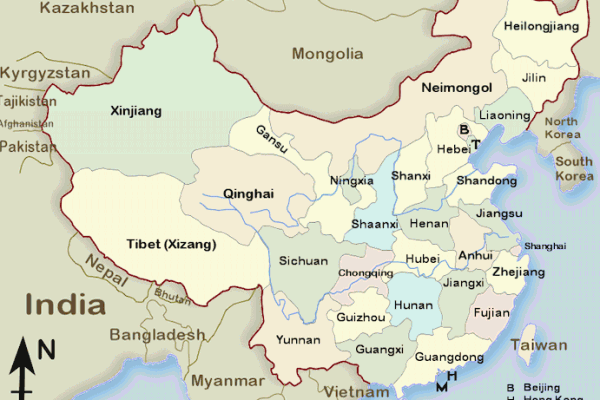 And yet it is a poverty stricken province. One third of the population are made up of several ethnic minorities which has a lot of cultural similarities to the South East Asian countries. As a matter of fact, Yunnan has more ethnic groups in the whole of China. Because of its natural beauty, this province thrives on tourism. Most of the tourism are internal. The world is still too focused on the Shanghai, Beijing and Xian. 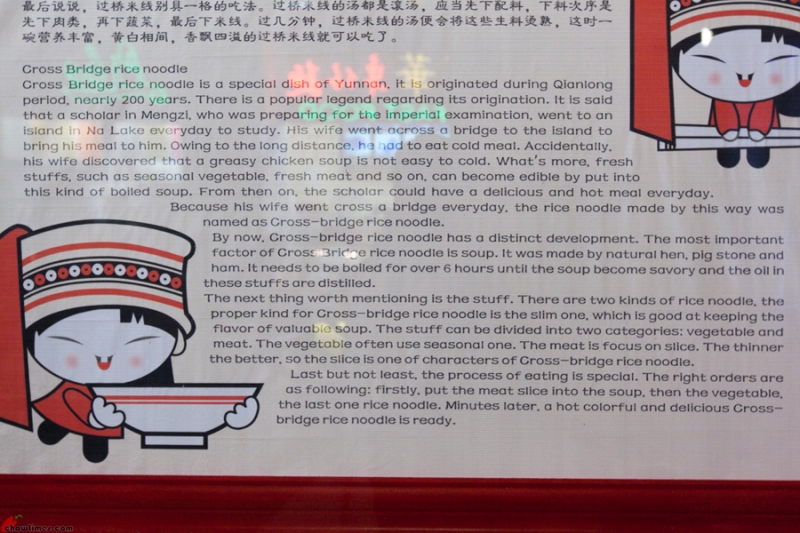 If there is one dish that is unique to the province of Yunnan, it is the “Crossing Bridge” Rice Noodle (过桥米线). You can get it throughout the province.

I went to a stall just last week and came across the board above. Did you notice the headgear of the figures above. That is not Han Chinese but is of one of the ethnic minority groups.

I like the way they narrated the origin of the dish. It’s kind of hard to read the small print, so, I had reproduced it below:

Cross Bridge Rice Noodle is a special dish of Yunnan. It is originated during the Qianlong period, nearly 200 years ago. There is a popular legend regarding its origins.

It is said that a scholar in Mengzi, who was preparing for the Imperial examination, went to an island in the Na Lake everyday to study. His wife went across the bride to the island to bring his meal to him. Owing to the long distance, he had to eat the meal cold everyday.

Accidentally, his wife discovered that a greasy chicken soup is not easy to get cold. What’s more, fresh ingredients, such as seasonal vegetable, fresh meat and so on, can become edible by putting them into this kind of boiled soup.

From then on, the scholar could have a delicious and hot meal everyday. Because his wife went across the bridge everyday, the rice noodle made this way was named as Cross Bridge Rice Noodle.

By now, the Cross Bridge Rice Noodle has a distinct development. The most important factor in this noodle is the soup. It was made with natural hen, pig bone and ham. It needs to be boiled for over 6 hours until the soup become savory and the oil from these are distilled.

The next thing worth mentioning is the ingredients. There are two kinds of rice noodles. The proper kind is the slim one, which is good at keeping the flavour of the valuable soup. The ingredients can be divided into two categories: vegetable and meat. The vegetable used are dependent on what is in season. The meat is focus on slice. The thinner the better, so the slice meat is one of the characteristics of the Cross Bridge Noodle.

Last but not least, the process of eating is special. The right orders are as follows: firstly, put the meat slice in the soup, then the vegetable, the last one rice noodle. Minutes later, a hot colorful and delicious Cross-Bridge Rice Noodle is ready. 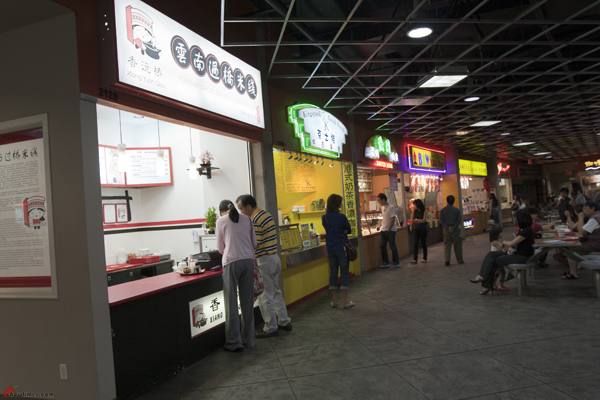 It is not a fancy place where I got the Crossing Bridge Rice Noodle. I came across this in the food court in Crystal Mall in Burnaby.

This stall is new. I think this stall used to serve Korean food. Anyway, you won’t miss it because it is located right on top of the escalator. I was more drawn to this place because of the story behind the dish. 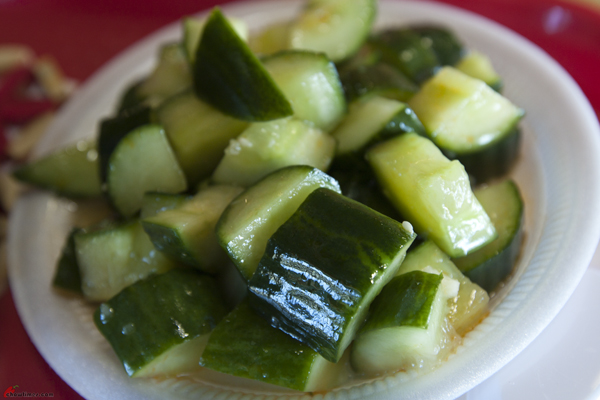 While their specialty is the Crossing Bridge Rice Noodle, they have other dishes too. I thought that the Cucumber with Spicy Sauce was particularly cheap at $1.75 and so I got one to try. I like this and often order this in Sichuan restaurants.

The cucumber is fresh … crunchy and cold. It doesn’t look spicy isn’t it? There are no tell tale chili flakes. The sauce wasn’t even red. But it is spicy alright. Real nice spicy. 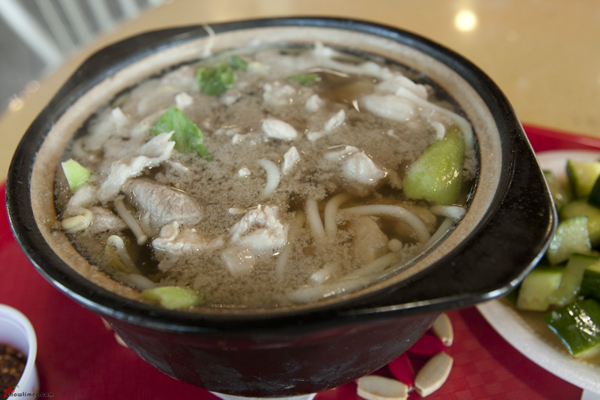 I was kind of disappointed when they served the Crossing Bridge Rice Noodle. They dump everything into the hot pot. No fun!

They should have served it in the traditional method … the sliced meat, ingredients and the noodles MUST be served on the side with the pot of chicken stock as the centerpiece.

But seriously, the noodles was not too bad. It was just that I expected them to serve it the right way because they went about telling the story on the sideboard.

Here is how you order this … you can get the soup base as spicy or plain (mine was plain). The 1 person pot which is what I had costs between $6 and $9 depending on what you have in it.

The larger 2 person pot allows you to choose 3 meats for $15. This sounded like a good deal if shared. I am not sure … maybe they will serve the soup, noodles, meat and vegetables separately when it is ordered this way. 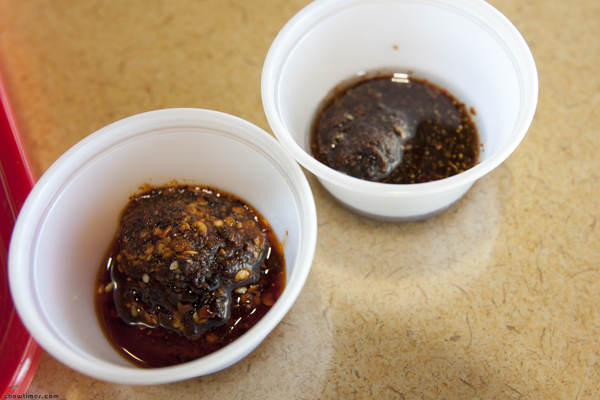 You know what scores for me? It is the above. Let me tell you … they are not the normal chili sauces you get elsewhere. I think just coming here to try this would be a good idea.

The chili on the left is very good. It has an odd spiciness and has a number of ground spices in it. I just can’t ID it but they are certainly unique.

The darker one on the right is my favourite. It is ground Sichuan peppercorn, that’s what it is. Awesomely numbing. 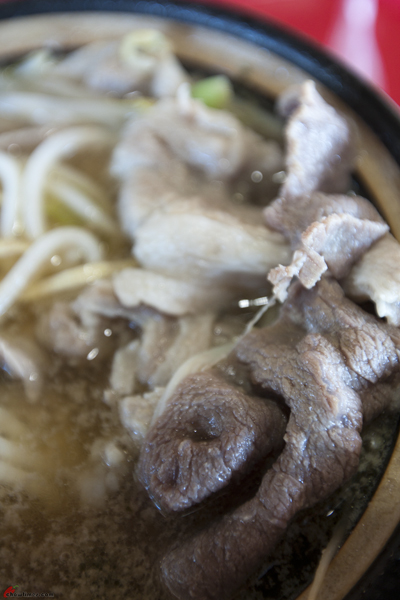 There are both beef and pork slices in my pot. The soup is boiling hot as you can imagine. 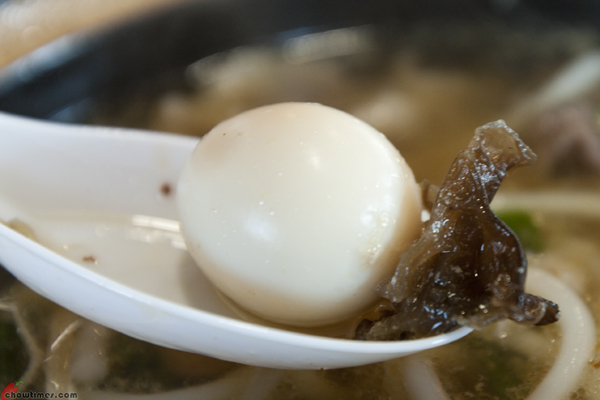 And there has to be the quail egg. But it is already hardboiled. They should have it raw, not hard boiled. But I know why they did it this way. It is because they did not serve this on the side and as such if they added it into the soup, it will disappear.

They even have wood ear but this was the only one of two pieces I found.

OK, this is good … but … I know of place where you could get the Crossing Bridge Rice Noodle served the way it is supposed to be served. Anyone can guess where?

I will tell you where … in the next post.