OK, here is the right way to be served the Crossing Bridge Rice Noodle.

“I think” because I had obviously never been to Yunnan. I am going by the detailed description of this uniquely Yunnan dish from this post yesterday. Here is the description again. If you had read it yesterday, it’s the same.

Cross Bridge Rice Noodle is a special dish of Yunnan. It is originated during the Qianlong period, nearly 200 years ago. There is a popular legend regarding its origins.

It is said that a scholar in Mengzi, who was preparing for the Imperial examination, went to an island in the Na Lake everyday to study. His wife went across the bride to the island to bring his meal to him. Owing to the long distance, he had to eat the meal cold everyday.

Accidentally, his wife discovered that a greasy chicken soup is not easy to get cold. What’s more, fresh ingredients, such as seasonal vegetable, fresh meat and so on, can become edible by putting them into this kind of boiled soup.

From then on, the scholar could have a delicious and hot meal everyday. Because his wife went across the bridge everyday, the rice noodle made this way was named as Cross Bridge Rice Noodle.

By now, the Cross Bridge Rice Noodle has a distinct development. The most important factor in this noodle is the soup. It was made with natural hen, pig bone and ham. It needs to be boiled for over 6 hours until the soup become savory and the oil from these are distilled.

The next thing worth mentioning is the ingredients. There are two kinds of rice noodles. The proper kind is the slim one, which is good at keeping the flavour of the valuable soup. The ingredients can be divided into two categories: vegetable and meat. The vegetable used are dependent on what is in season. The meat is focus on slice. The thinner the better, so the slice meat is one of the characteristics of the Cross Bridge Noodle.

Last but not least, the process of eating is special. The right orders are as follows: firstly, put the meat slice in the soup, then the vegetable, the last one rice noodle. Minutes later, a hot colorful and delicious Cross-Bridge Rice Noodle is ready.

So yeah, I was quite disappointed with the new stall in the Crystal Mall food court who profess to serve Crossing Bridge Rice Noodles and yet do not serve it the way it is supposed to be. They are supposed to make you feel like a scholar served by the wife … just like the legend says.

But I know of a place that serves it the correct way … the way that the legends says it should be. LOL! So, I made my way to this restaurant yesterday and took some pictures so that I can show you how this restaurant does it.

I actually had it earlier in 2006 and blog about it. It was one of the “charter posts” of chowtimes. This is offered as a lunch special. See how they do this right? The first thing they did was to bring two plates of ingredients. Just the two plates … separately served.

I shall call the first plate above “The Fiber”. 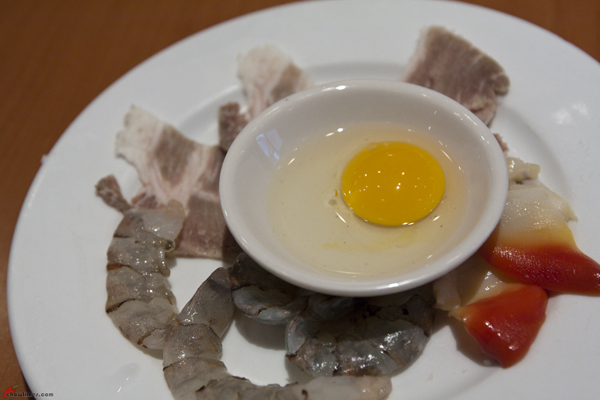 The second plate is more important. I shall call this “The Protein”.

Right in the middle is the quail egg … served raw, as it should be. In the Crystal Mall food court, they cheated. They gave me a hard boiled one. No, no. *finger wag*

Then there are … slices of pork which is also an important component. The prawns were butterflied thinly too. They are sliced thin because it cooks fast in the broth.

This is the whole package. Ladies and gentlemen, this is the Crossing Bridge Rice Noodle … the real deal. Not in that thing they serve in the Crystal Mall food court.

And all you have to go to get this is just head downstairs from the food court!

I had this in the S&W Pepper House in Crystal Mall. They have this as a lunch special for just $6.75. If you want to try the Crossing Bridge Rice Noodle in the food court, you might as well head downstairs as S&W serves way better food.

I eat in S&W very often as it is close to my office. I almost always order the item #103 above. The Fried Lamb with Cumin on Steamed Rice is wonderful. I tell, you should try it and see what I mean.

I know it is kind of strange. You see, once all four plates are served, they will proceed to pour everything into the bowl of soup for you and then take away the empty plates. They could have mixed everything in the kitchen and then serve this in a bowl to me.

But no. They wanted to serve it the way it is in the legend of the scholar and the loving supportive wife.

Sigh … with me reading the 24 Hours newspaper and the waitress pouring my food into the soup, I felt I am re-living the legend. Oh yeah, that is how it should be done.

Other than that, the food was just so-so. LOL!

The noodles are not strong in flavour. The whole idea is that it is served warm.

I asked for the chili oil to spice it up a bit. That makes it taste much more better.

Here is a picture of the Crystal Mall in Burnaby. If you should want to feel like a scholar, S&W is a better place to go for the “experience”.