Honestly, I never had the desire to visit the President Plaza food court.

We had been there several times before over the years. What I saw there did not impress me at all. It looked like a dead food court to me which to an extend is true. I have never seen this food court with crowds anywhere the likes of Yaohan Center or Crystal Mall. Each time I go to the President Plaza it is to go to T&T.

My indifference is there even though the local chowhounds had been raving about this stall called O’Tray.

But … oh boy … I realize now what I had been missing! This is one classical case where ONE stall made all the difference to the food court. I think if we take O’Tray away, the President Plaze FC will lose 1/2 of their customers overnight.
View Larger Map

The food court is located on the 2nd floor of President Plaza.

Let me get this out of the way first and foremost. The entire food court was just recently forced to close by the Vancouver Coastal Health. This happened on July 30th and the cause of this was pest infestation and unsanitary conditions. All of the stalls were asked to close for one week except for one stall, Always Good, which was forced to close for one whole month. This led me to think that the source of the infestation was from one stall but the collective inaction of the other stalls caused a huge damage to its reputation.

Frankly, that did not deter us from going there. If this thing does bother you, I suggest you stop reading.

The first thing we did when we were at the FC was to walk around the stalls. They were noticeable cleaner … very clean as a matter of fact. I kept peering into the kitchen, the floors, the corners, the areas under the table, they were clean. I guess the operators learned a huge lesson.

The Always Good stall remain closed. Everything is stripped clean. The fridge with the glass window is empty. No sight of food or boxes or anything like that. We were wondering if they are ever going to re-open since it is already past 1 month since the closure order.

O’Tray Noodle is the stall at the furthest end of the food court. It is the one which is the brightest because of natural light from the foyer.

BTW, does anyone know where the Irish sounding name of O’Tray came from?

It is run seemingly by a couple who are very friendly and very helpful. You see, I ask silly questions sometimes. Learning that O’Tray is a Tianjin stall, I asked where Tianjin is and which province it belongs to. Yeah, to some of you this is so elementary but really I am just re-learning my Chinese heritage.

Well, Tianjin apparently is a city close to Beijing and it does not belong to any province at all. The city is one of the five municipal cities under the direct control of the federal government. 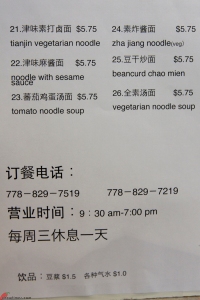 I love their menu. Just look at the prices first.

Without hesitation she said #1. It is the Tianjin wrap. Not even knowing what it is, we went with her suggestion. We watched her making this and asked if we could take pictures … why, she even slowed down for me to take shots. Seems like she had done this before and many people had taken pictures of her in action.

Like Sambamaster from Portland who incidentally sent me the video of the food courts he had visited recently. I was glad to see this video because it showed how the Tianjin Wrap was made.

The lady told me that the Tian Jin Wrap is based on a recipe that is … “100 years old” which I am not sure if that meant it is an old, ancient recipe or it literally meant 100 years old, which is that is the case, it is not old if you ask me.

She did say that it is a very traditional meal in Tianjin. Actually, this is more apt described as an egg crepe than a wrap. It is very eggy.

For just $3.75, it is a good deal. It is topped with green onions and cilantro. She also added a few type of sauces in it that gives it a combination of sweet and spiciness. She also put in it some very thin and crisp doughnut … makes it crispy and hold its shape.

Because of the eggs there, I was halfway of asking her to put in some soya sauce the moment she broke the yolk … and asked that she add one more egg in it. 🙂

The Tian Jin Burger sounded very interesting. This is cheap too at $2.75.

It is not very big as you can see. This reminds me of the roujiamou (spelling?) that Dylan recommended from the Want Want stall in the Crystal Mall (see post here) except that it is not as greasy.

It is filled with rather substantial pieces of cubed beef … and moist too. The bun is one of the kind. It is not your normal bread, instead the crust is crispy and flaky. Interesting … definitely worth a try.

All the food we tried that day was really good. But one that really wow’d us is this one … the soft tofu soup.

The Tofu Pudding is served in a thick broth which is lightly spicy. It also has bamboo shoot and wood ear fungus.

It is kind of hard to explain this … like sweet and sour soup with tofu pudding with chili. If we come back again and has to order only one thing, it will surely be this one. If they had more chili in this, it will even be better. Yeah, maybe that’s what I’ll do the next time … ask the lady to add more chili for me for that extra kick.

There was just Suanne and I eating there that day. The boys were away with their activities.

Even though we had already three orders of food, the lady told us that their most popular dish is the ‘Ma La’ (numbingly spicy) Beef Noodle.

Looking at it made me salivate. We both love the thick creamy broth. We were curious and went back to the stall and asked what that broth is made of. It looked like laksa in the way it is “creamy”. It is definitely not caused by coconut milk like they have in laksa.

The chef told us that creaminess comes from “many ingredients” but struggled to find the right English word for it. At the end, the only names he could tell us is peanut and sesame sauce.

The noodle was spicy enough but we did not find it “ma la” (numbingly spicy).

All these food for just $16. You can’t beat the value in this stall.

I felt that O’Tray is what makes a difference to the President Plaza food court. There are other stalls which I was told serves pretty good stuff too. As a matter of fact, Suanne blogged about this food court before when she had the Shaobing at the Yung Ho Soy Drink stall (see post here).

Before we left, we walked over to the O’Tray stall just to tell the nice lady that we had a very nice meal, every single one of them. She was obviously happy with our feedback. I also took the opportunity to ask her about the VCH closure. I could immediately see the pain in her eyes and she was somewhat defensive. I can’t blame her because she could have thought that we are journalist or something out to write a damning report about food safety or something. She was obviously stung with my question because she did not see this coming … not right after I told her we like her food.

I said she was defensive … she told us in a “I hope you understand” tone adding that “although they force us to close for 7 days we were opened after two days. They inspected us again and they passed us”.

I’ll leave it at this to how you want to interpret this.

But the food is good. Damn good!

Thursday to Tuesday: 9:30AM to 7:00PM
Wednesday closed