Remember earlier this month when I blogged about this new hot pot restaurant called So Hot So Pot on Alexandra and Garden City?

Well, we learned a bit more about the restaurant. Apparently So Hot So Pot is part of the Manzo group which operates the Manzo Izakaya (on Alexandra) and Manzo Itamae (on Capstan Way). All these while I thought that Manzo is a Japanese owned restaurant (it might be) but it seems like that are also operating Chinese restaurants too.

Oh … one more thing … in the latest ad on the papers, they have been spelling the name Sohot Sopot, rather than So Hot So Pot. Do you think this is because people are making fun of their name and been calling them so-so hot pot? I thought it was kind of funny.

I did not know that there is another new restaurant just next to So Hot So Pot. It is called Spicy Stage Cafe.

We only knew about it when we saw an ad about this place.

I don’t think many people will realize that Spicy Stage is in that lonely corner. The entire front entrance is hidden from the road with the signboard totally obscured by the tress in front of it and huge $18.95 All-You-Can-Eat sign from the So Hot So Pot around the corner.

The dining area is nicer than we expected. It is very clean and very pleasant. The service is good. The waitresses appears to be well trained although I think they are also green.

The dining area of Spicy Stage Cafe is actually connected to So Hot So Pot via a corridor. So, I think these two restaurants even share a single kitchen from the looks of it.

There is about 30 seats … so the place is not very large. It does look smaller too because it has a long and narrow setting.

Spicy Stage Cafe is doing one of those make-your-own-noodles popularized by Cattle Cafe (which incidentally is just 100m away from this restaurant).

Click on the image above to show the options larger.

Anyway, for $7.25, you get to choose the soup base, the noodle type and two types of other ingredients. The price also includes a coffee. Not a bad deal right?

It is a good selection too:

Someone do the math for me … how many combinations are there? 🙂 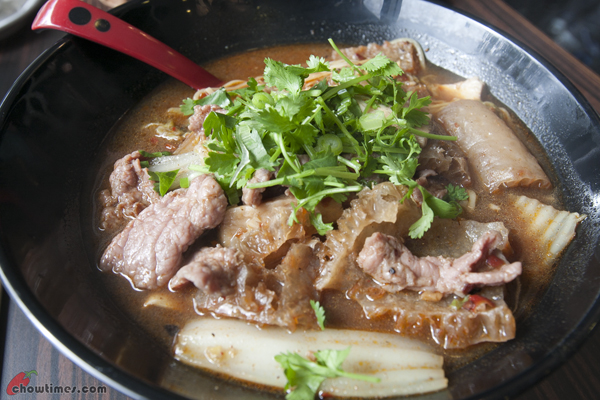 So we definitely ordered the Noodle Combo.

The Szechuan soup base can be made in 3 levels of spiciness, but the server did not ask me what I wanted. It was spicy enough. As for the HK style noodles, it turned out to be oily yellow noodle. For a while we thought it is doll noodle.

In the bowl are suey choy, mushrooms and bean curd sticks. The serving is big and certainly value for money considering it included a drink too.

The pigskin is soft. I like the texture a lot. There were quite a bit of meat in the bowl, lest you might think they get stingy on this for charging so low for the noodles.

What we did not expect was the beef slices. They were much thicker. We thought that since they were next door to So Hot So Pot and has excellent super thin beef slices, that perhaps we get those. Nope. This is not like those from the hotpot meal. 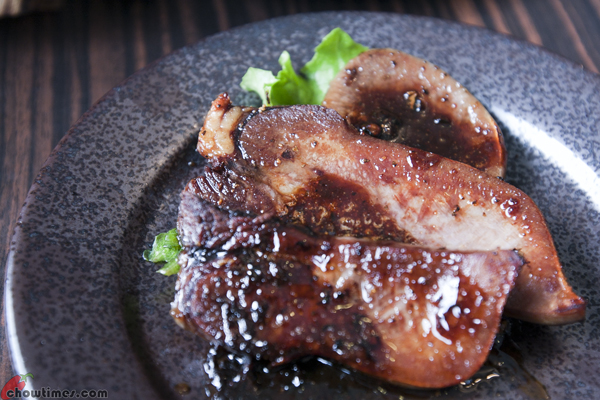 You can get extra toppings if you want. It is just $1 each. There are three types that costs a bit more at $1.50 each … the Grilled Beef Tongue, Pan Fried Pork Chop and Deep Fried Chicke Wings.

We decided to top this up with the Grilled Beef Tongue. The moment we saw this, the first thought that came to our mind was … hey this looks like something they serve at their Manzo Japanese restaurants. The beef tongue was good and nicely seared with some parts caramelized hard.

It was while eating the bowl of noodle that Suanne suddenly said, “Oh … they have laksa soup base too. Do you think that they will allow us to do a hot pot with the the laksa soup base here?”

Brilliant idea! So I beckoned the waitress over and ask to see their hotpot menu with the aim to gradually ease them into the idea.

When they passed me the hot pot menu, I said, “Hmmm … you don’t have laksa don’t you?” I made the waitress to go ask their boss if they will be willing to let us have hot pot with Laksa. it took a while for her to come back. She came back and smiled saying, “yes, my boss said that we can do it for you”.

Wohooo … at that time I think I finally managed to find a place where I could try laksa hot pot. Suanne was saying that I am very bold asking the restaurant to make this and that.

So this gets weirder and I got bolder (anything for adventure in food!) and the waitress was rather stunned when I …

She was stunned for a moment and then said “no we can’t do that”.

I told her “No, go to your boss and let him know that I just wanted to taste the soup so that I can see what their laksa soup taste like. I need to know what it tastes like but I don’t want to buy a bowl of noodles just to taste. I can see she was just hesitant to go ask for me.

She did. And she came back smiling with a bowl of laksa soup in her hands. [There, Suanne. It’s not hard, is it?]

They even took the trouble to pretty it up for me with tofu puff.

I was so excited that I finally found a solution to the laksa hot pot.

That is until I took a sip. My balloon deflated. It was not the kind of laksa that will work. It is the salty type … and watery … and very heavy in prawn taste.

Back to the drawing board. I think I’ll go ask Bo for his laksa.

Suanne, she ordered from the Mini Hotpot Combo and choose the Pig Intestine Pot ($9).

She did not quite like it because there were more pig’s blood than intestine. We don’t like pig blood. I used to like it when I was young but I just can’t stand the thought of eating it now. 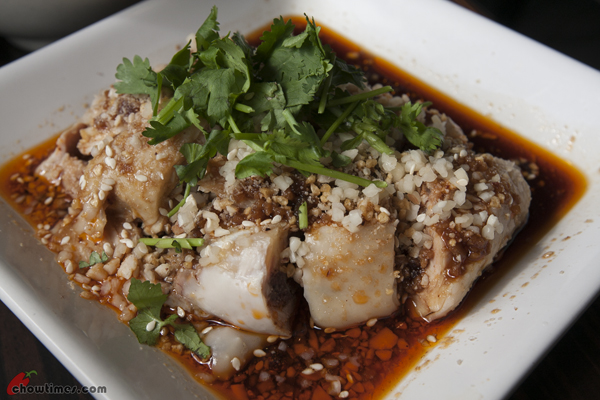 We asked the waitress for a recommendation and she recommended the $8 Cold Chicken with Spicy Hot Sauce. This is basically the “mouth watering chicken” or better sounding is the “saliva dripping chicken”. 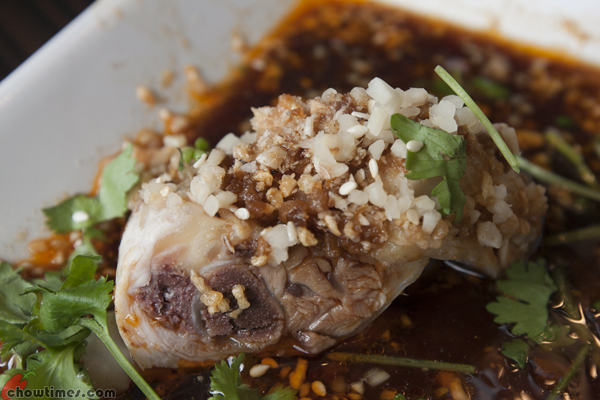 Was it good? Not particularly.

It is more vinegarish than it is spicy. For the amount of chicken in the plate, we thought it is also pricier than having it in Sichuan restaurants.

OK, the chicken meat is tough and we told ourselves that maybe it’s free range chicken. They also have this bits of stuff on it which we could not quite figure out what it is. 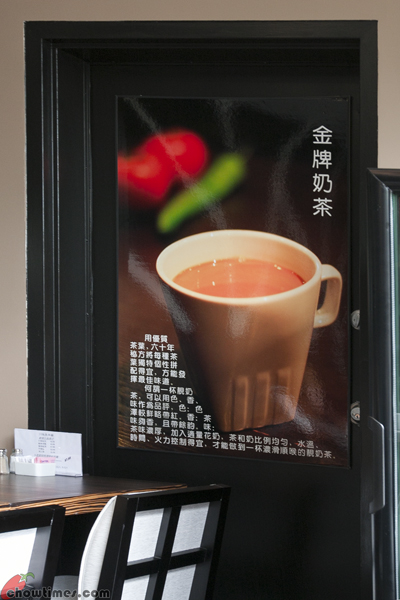 There was a poster on the wall that was touting their house special milk tea. Suanne was saying that it seems like its a big deal and that it is based on a 60 year old secret recipe.

I want that! And I specifically asked for the house special milk tea.

Breakdown in communication … and I ended up with this:

No wonder she asked if I wanted jelly (which is 50 cents extra) in my milk tea. So my GREEN tea is white in color. I have no idea what makes it white. But it tasted great.

If I was not so full, I would have ordered the version that is made with a 60 year old secret recipe. I am a sucker for these sort of things.

I guess the above is some specials they have but it is all in Chinese. The prices are cheap, whatever it is.

I think the Spicy Stage Cafe still have teething problems. The food wasn’t great all round. It was just so-so. The prices though, I thought was good.

I still want to do a laksa hot pot event.