Among all the north-south arterial roads in Vancouver, for me, one of the least used ones is Victoria Drive.

I will use Granville, Oak, Cambie, Main, Fraser or Knight but hardly Victoria. I like Fraser the best because it has a lot of restaurants along the way. Yeah, as a habit I do look out for restaurants as I drive. Now I am beginning to realize that Victoria too has a lot of Asian restaurants.

As I was driving along Victoria a few weeks ago, we managed to add 7 different restaurants in our to-try list. It looks like we will be coming here a bit more the next few months.

The one particular restaurant that caught our attention is the Angkor Restaurant. The font and the sign of the restaurant did not stand out. It was the words “Cambodian Noodle House” that made us want to come to this restaurant. 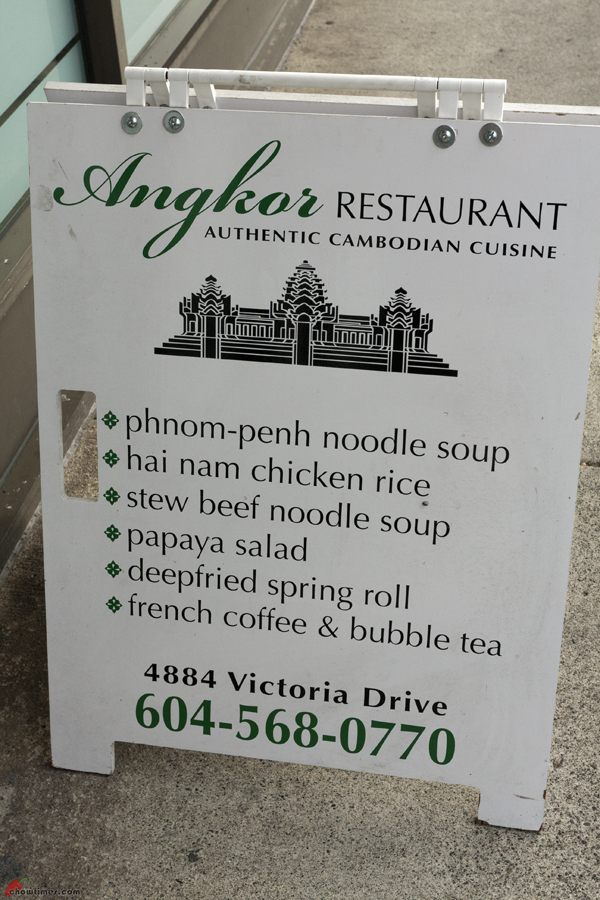 Until now, I thought that there is only one Cambodian restaurant in Vancouver. We have been to the Phnom Penh restaurant and blogged about them before.

Oh, I had also been to Phnom Penh, the city, before. That was eons ago when I was working for the British American Tobacco and had to travel to Asia Pacific countries as the IT Application Manager. That was one of my most memorable trips. You see, back 15 years or so ago, Phnom Penh is very much a cowboy town. It was quite lawless that the company assigned a driver to be with me 24 hours, partly to protect me too.

When the plane landed in the airport, the driver met me the moment I stepped onto the tarmac (their airport has no aerobridges) and escorted me direct to the car, bypassing customs. The customs at that time were rather corrupt and will inconvenience business travellers. I was told that they will even be happy to take notepads and pens from you. So my company has a special arrangement for its employees. Pretty cool.

And when as I was about to get into the car, the driver pointed to me a hole on the driver side door. “Bullet hole”, he smiled. I asked him how he got that bullet hole. He said he got into an argument with a motorcyclist and the motorocyclist pulled out a gun and shot at his door. OK, I got it. I think he was just trying to tell me never to go out on my own without him.

Phnom Penh was an amazingly flat city. From the plane I had never seen a sight like that. I did not get to see the city on my own at all, the driver always took me to somewhere safe for me … to shops and restaurants for tourists. The city folks love flying kites. There were hundreds of kites in the city square. I wanted to get off to spend time there but the driver said it is not a good idea.

The city was also very dirty with rubbish strewn everywhere. Lots of bikes and people were peddling gas from the side streets … they sold petrol in plastic bags cheaply for the motorcycles. At that time, they were in the midst of changing their road system from one side to the other. So some cars are left hand drive and others are right hand drive. The traffic was chaotic and I swear that there were a few occasions that I thought my driver were going to kill a motorocyclist. Amazing.

The people are very friendly and oh yes, the girls were very pretty and have nice facial features. Those were my memories of Phnom Penh in my brief stay of just three days.

After all these years, I am quite sure that Phnom Penh is a much better place today.

The restaurant is clean and bright. Actually it looked cleaner compared to the average Asian restaurant. Which is to say that it is good.

Service was good and bad. Maybe I should not say bad. You see, when we got settled down we were served by a middle aged gentleman. He was very friendly and chatty. I talked to him a lot about the menu and all and he was more than obliging. After that he went to the kitchen and we were attended next by someone who looked like his wife or something.

Now, she was suspicious of us because we took notes and pictures. Well, she noticeably treated her other customers more sweetly than us. Actually I don’t blame her because she did not know our intentions and we found it difficult to get the chance to explain. I think I am good at charming people like her but this time I just couldn’t weave my magic.

He he he … she might think that we are one of those Chinese people who are out to copy her food and open a Cambodian restaurant. Who knows, right? 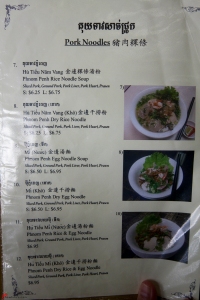 The menus above are clickable for a larger image. I like their menu. It is well laid out, informative and most of all there are clear pictures of what the dishes looked like. Their menu is in FOUR languages: Khmer, Vietnamese, Chinese and English. The prices are in English.

One thing that jumped at us is that it is a lot of pork, pork, pork. I assumed that Cambodian cuisine is closely related to Vietnamese which is beef, beef, beef. Apparently not in terms of the meat.

We told ourselves we are not going to just order a couple of mains but also order an appetizer and a dessert too. We don’t normally order this much but there are so much in the menu we wanted to try.

So we started off with the Papaya Salad which is $7. 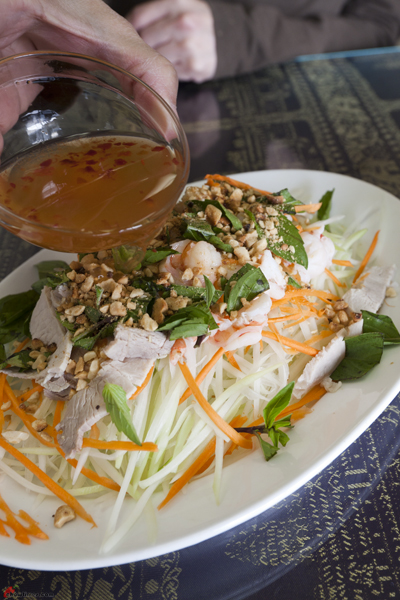 We find that the fish sauce dressing is not salty and light in flavour, again comparing to the Vietnamese version.

The freshly shredded green papaya. prawns, thinly sliced pork, basil, julienne carrot and crushed peanuts makes a wonderfully refreshing combination. The green papaya is chewy though. Yeah, it takes a bit of work but all the chewing just brings out the simple flavours of all the other ingredients.

We asked the middle age man for a recommendation. We were initially dismayed when suggested we get the Phnom Penh Rice Noodle Soup. We told him no … we want something Cambodian and not something that is Vietnamese as it sounded like Pho.

He was convincing when he insisted that this is very Cambodian and not Vietnamese. Moreover, he said they make it like the real Cambodian way with pork, not beef … and that they like pork heart and they have it in this bowl.

I am an easily convinced person.

When we were eating, we overheard the other customers ordering this with their own combination of ingredients … “exclude this and that, especially the organs, add more of this and that” … that kind of thing. They are obviously Cambodian customers who knows this very well.

See above … there are several types of pork meat in the bowl … sliced pork, ground pork, pork liver, pork heart. There are also prawns but pork is what dominates this dish. We took interest to the pork heart which has a very similar texture to pork meat except it’s darker in colour.

The noodles were just rice noodles. Nothing different from pho’s.

Besides the various pork meat, the soup stood out for us. We just enjoyed it a lot because it is so flavourful. It also has tung choy (preserved vegetable) which I think has a Chinese influence in this.

If we come back again, we will want to order this again. It is that good.

The middle age man also suggested that I get the Cambodian Style Stir-fried Lemongrass Beef  & Rice ($8).

It is also called Chhar Kruang Sach Ko & Rice … nice name and fun to pronounced. He was teaching me how to pronounce it right. I thought I had it right but he keeps saying no and then repeating what I said.

Very lemongrassy and strong flavours. That is how I would describe this. The flavours is so strong that one has to eat this with rice.

It is good … and the “jup” is just so wonderful with the rice. This is “jup” OK? Not au jus, not tāngr, not tārrrng and certainly not tāngtang.

There you go … pork again. This bowl of pork soup came with the rice. Nice and the pork got flavour.

Now you tell me … do you call the above a condiment? Yes? No?

Whatever it is, the pickled chili padi looked so tempting.

Very hot but really nice to take a small nibble (like 2mm) with every spoonful of rice or noodles. I like it. Suanne said that it’s too extreme for people to even like it.

Their blanched bean sprouts looked so sorry. We did not even touch it. This is not bean sprout. They should call this bean SPROUTED. Give it a few more hours, this will turn into a plant. He he he.

Too full but we wanted to try Cambodian dessert. It was easy to get Suanne to agree.

They have two types of dessert available. One with beans and another with banana. Leaving to Suanne to pick, she chose the one with beans as she’s skeptical of getting canned banana instead of fresh one. That’s what she said … don’t know what she meant by canned banana. I had never seen canned banana before. [Whatca talking about, honey?]

This is called the Cambodian Style Bean Pudding with Coconut Milk which is $2.50. Bbor Jaduv is the name. I like these names. Try pronouncing it … be-bor-jar-doov. Sound like the name of the brother of Jar Jar Binks.

It is served warm, lightly salted … thick and sticky with glutinous rice in it. This would have been perfect for me … but … I hate beans. Especially this type of beans.

If you are bored with Vietnamese pho, you should give this restaurant a try. The prices are cheap and the food very good. I don’t think you will be disappointed.

Oh, we wanted to also order their fried chicken wings because most of their customers ordered that. They looked so good but we were too full. Next time … most certainly next time.

Here is their business hours, such odd combination: