Updated: 27th Oct 2014; This restaurant is closed according to Urbanspoon.com.

May I have your permission to get excited again … please? LOL!

Let me cut to the chase … this is a restaurant that: 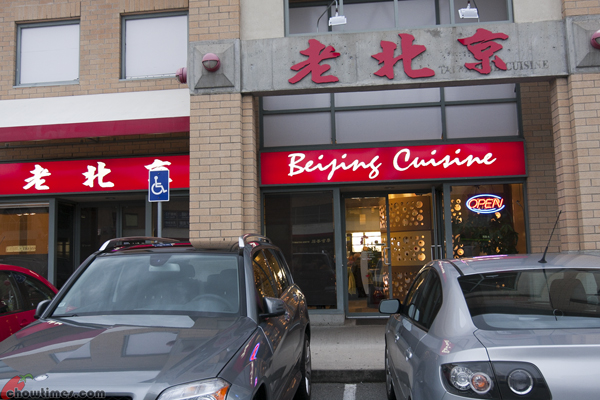 We just chanced onto the Beijing Cuisine last weekend while driving around deciding where to eat next. That’s what we do sometimes when we don’t know where to go to and we don’t want what’s on the to-try list. In Richmond, there are plenty of places to eat. Every now and then, you see new restaurants opening.

We were drawn by the simple bright red sign. With darkened windows, we thought this would be one of the higher end restaurants. We were wrong.

The interior is exactly the same as we remember it when it was Taiwanese Cuisine. Even the furnitures and the lightings are the same.

Service was friendly and surprisingly all three waitresses speaks very good English. That helped a lot because we could chat with them and ask them all sort of questions.

At a glance at the menu cover, I thought that looked very familiar and saw it somewhere before.

The name of this restaurant in Chinese is translated as “Old Beijing” or “Traditional Beijing”. But it was the red cover with the yellow fonts that I remember. When I flipped open the menu, the sections and selections also look awfully familiar.

It was after a few minutes when I ask the waitress “Are you by any chance related to the Beijing Noodle House on Buswell?”

“Yes” she said adding that they had only opened for 10 days. She even flashed all her 10 fingers to emphasize that. I think she was kind of proud that after just ten days operating they are running almost full house.

See? I have good memory of good menus. 🙂

I like menus like this. There were so many to go over that we took our sweet time. The waitresses came by twice asking if we are ready to order and on the third time, we told told her we will just order the appetizer first because we need more time.

If you want to check the menus above, let me tell you a little trick. Just right-click each image and select “Open in new window or tab”. That way you don’t have to flip to the menu, come back to this post and click the next one.

Here are some of their other price ranges:

The prices are not too bad right? 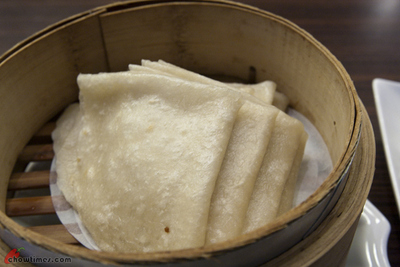 The above was the get-off-our-back-we-need-more-time-with-the menu order.

Actually it was recommended by the waitress … the Beijing Style Sauteed Pork with Green Onion in Bean Sauce and Pancake ($11).

Actually I didn’t want to … order this but the waitress was telling us theirs is very good.

Actually it was very good like what the waitress said.

The eight pancakes were served warm. It was not dryish or flour-y as some other places tend to be. It was moist and soft.

We like that they have the sauteed pork served on a bed of julienne raw green onion. There was too much pork and not enough wrap. 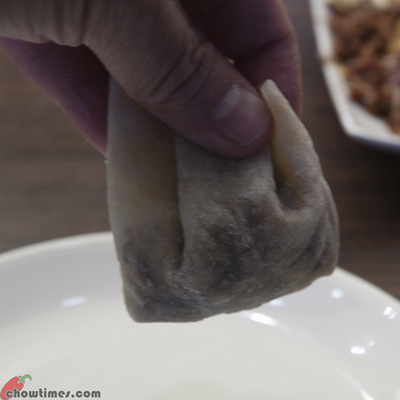 What is the proper way to wrap this anyway? The method on the left seems to be the right way but it’s harder to eat because the pork keeps slipping out from the ends.

The method on the right is easier to handle. The problem is trying to shove the whole thing into the mouth.

We saw some neighboring tables ordering these burgerlets which we can smell from our table.

“Roujiamo” is that they call it, I think. On the menu this is called the Fried Lamb with Cumin Served with Special Pan cake ($4.50 for two).

It had that distinct cumin lamb flavour and smell. Look at the meat and you can just imagine how moist and tender it is. It is lightly spicy.

The bun is more like a sesame coated soft pancake. In many respects, this rivals the roujiamo from the Want Want stall in Crystal Mall. It is addictive. We wished we had more but there is just so much room on our stomach. After all, these are just the appetizers. 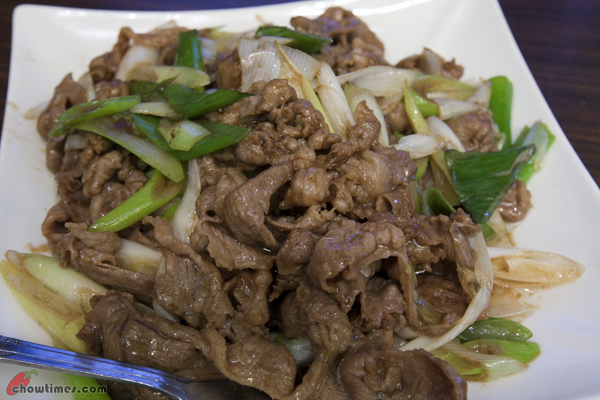 The Fried Lamb Slices with Ginger and Green Onion ($12). This is another persistent recommendation from our waitress. We did not want to order this initially because we already had lamb with the roujiamo.

What an excellent recommendation! The lamb here is totally not gamey at all. For a short while we thought they might have given us a pork version instead. Not only was the meat not gamey, it even has the same look and consistency of pork. But yes, there is that unmistakable smell of lamb.

So much “jup” that it was great with rice. I think even people who don’t like lamb may want to give this a try. 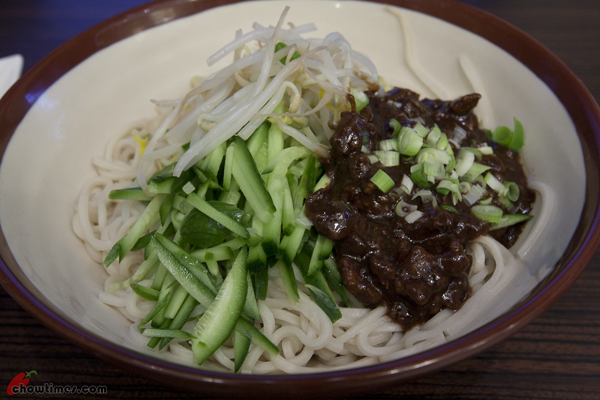 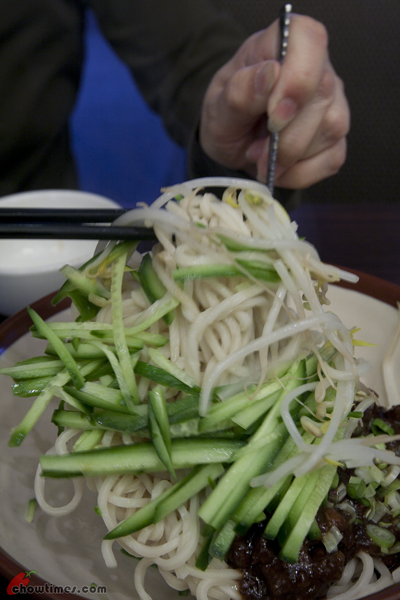 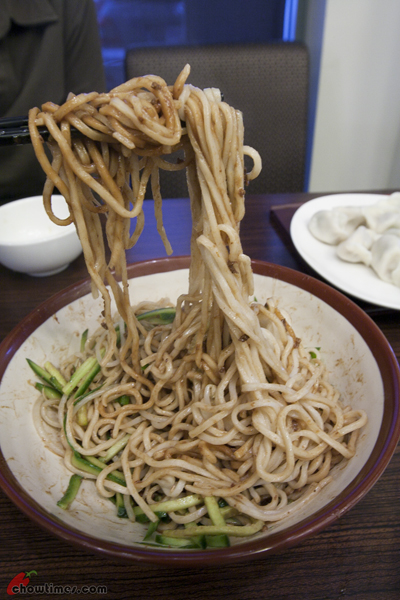 We might as well let the waitress do all the ordering.

This one is the same. We wanted to order the Peanut Sauce Noodle Beijing Style (Cold) but the waitress smiled at us and asking us “You sure? This one is no good. This one better”.

First thing I did was to check the price. I was thinking she was trying to get me to order the more expensive dish.

But the dish she recommended is the same price, $5.95. It was the Noodles with Soy Bean Paste, Beijing Style … aka the Zha Jiang Mian.

It was a big serving — enough for two people. It has the same traditional ingredients … ground pork bean sauce, julienne cucumber and bean sprout.

The bean sauce was quite flavourful and does a lot to the dish. But like I said, it was a big bowl of noodles.

Last but least … the Boiled Pork Dumpling Stuffed with Leeks, Shrimp and Eggs (15 pieces) $7.50 did not appeal to us.

While it was served hot and the skin of the dumpling is soft, the skin was simply too thick and the ingredients inside did not stand out at all. So it was like eating the dumpling skin.

For all the food, I thought the price is more than reasonable. We had some to take home.

Little Ongpin on No. 5 Road, Richmond