Attention foodies … especially those of you who are adventurous and enjoy exploring new and unique food.

This is another restaurant that excites me … a lot. I think it will you too.

I stumble upon Mui Ngo Gai by accident a couple of weeks ago when we drove all the way from Richmond to Nanaimo and Broadway. That was when we went to the Golden Phoenix for dim sum.

We parked our car right in front of this restaurant with an uncommon name. What immediately caught our eyes as we got out of the car was the picture menu that they had pasted in the front window. It was not just us who stopped to look but there was one other person who stopped too.

Stay with me and let me tell you why this is so exciting. You really must read every page of the menu to understand what I mean (just click on them to show it in larger image).

Starting with the first image above on the left. This is about the appetizers. The normal stuff of spring rolls and deep fried chicken wings are there. However, the one that stands out is their hot chilli oil. I mean, I see this quite common and you can find this in most Chinese restaurants. However, they claim it’s different. I’ll tell you more later.

The middle image above is pretty hohum. It is the various combination of pho. The only difference is that they offer four choices of noodles with the 16 types of pho.

What is EXCITING is the third image on the right above. OMG … there are TWELVE different types of noodle soups! You must check this page out. Late last year when we went to Thien Kim and discovered that they had FOUR types of (non-Pho) noodles soup, that post was a hit and brought a lot of new customers to Thien Kim. I can just imagine how having TWELVE noodle soups is going to excite a lot of people. 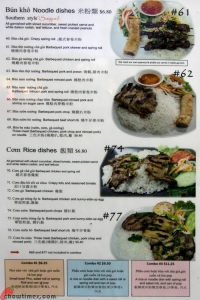 The left most page above contains even more noodles. Those are the dry noodles common in the southern part of Vietnam … not just 1 or 2 but ten to choose from. And further down the same page is another ten types of rice dishes.

The image in the middle above is their Dinner only dishes. Some of the exciting dishes includes:

The image in the furthest right above is their more exotic specialty dishes. How does the following sound to you?

I was already eyeing the Vietnam style hot pot. It is on the left image above. OMG, reading this menu is just so exciting to me.

So right after we saw this menu, this restaurant visit became our #1 priority. 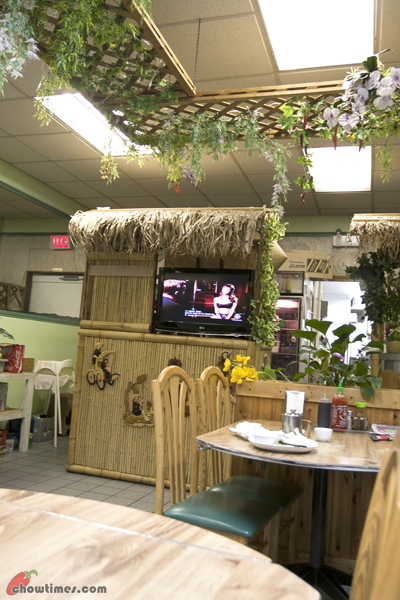 The restaurant is nothing fancy. It is like one of your neighborhood Vietnamese restaurant. They tried to create a Vietnamese village setting with bamboo and faux plants. The faux plants actually made the restaurant dimmer because it blocks the ceiling lights.

Yeah, most of their customers looked like they are from around the neighborhood. It was busy that night with almost all the tables filled.

Service was very polite and we were well treated. I am sure it is because they saw the camera. They asked me real early about it by saying “you have a nice big camera there.”

But service was painfully slow and it took a long time for our food to come. They were very busy that night. After all it was a weekend night too. 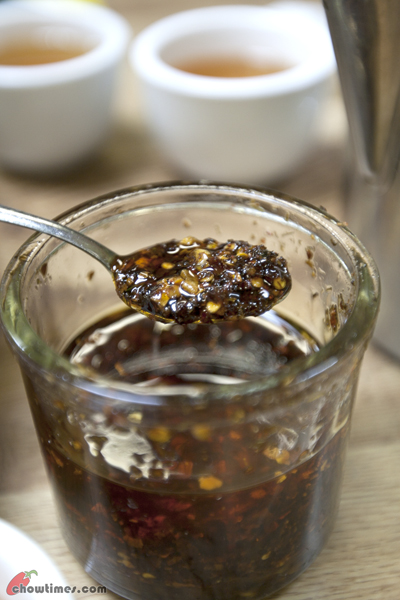 We were served mostly by a middle age lady which we presume is the owner. So we’ll refer her as the owner in this post.

The first question we asked the owner was what’s the big deal with her hot chili oil. I told her that I had seen such chili all over town, especially in Chinese restaurants.

Her answer was that theirs is different. She said she has 35 different ingredients in this and it is made exactly the same way it is in Vietnam. I tried it … and yes, I like it. It has an extra spicy kick to it and the taste is a bit more complex. I think if she bottles this up and sell it just like Tsim Chai restaurant does, this will sell for sure. I will want to be their first customer.

Let’s get on with the food … 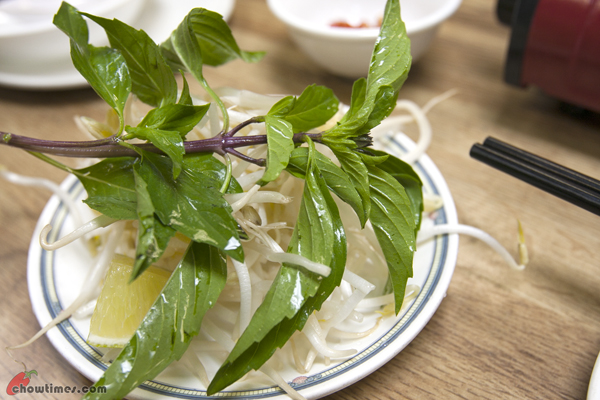 The bean sprout and basil was very fresh. We did not expect that because we always assume that dinner time bean sprouts are browned already after a whole day in the kitchen. For us, we don’t like to add them into the soup as it dilutes the taste of the soup but we see a lot of people does it that way. For us, we just munch on them like appetizers until the food comes. 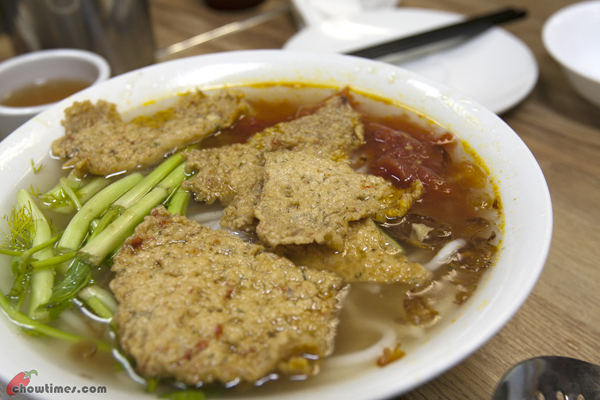 Nanzaro ordered the Bun Cha Ca (Large $6.75). It ended up everyone had equal share of his bowl of noodles. He wasn’t too happy. LOL!

Oh we all loved the crispy prawn and fish patties. They are thin and crispy and tasted so good. The soup has caramelized shallots which adds a lot of flavour to the already nice broth. The broth tasted tomato-ey … mostly from the sauteed de-skinned tomato 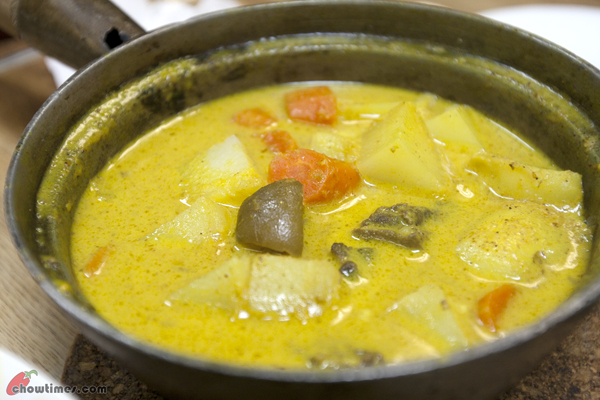 From the entree section of the menu, we got the Ca Ri De … Goat Curry. This is $14 which we find kind of highly priced.

The yellow thick creamy curry is rich. We can see that this has to be made with lots of different type of spices. For us, it was spicy enough. 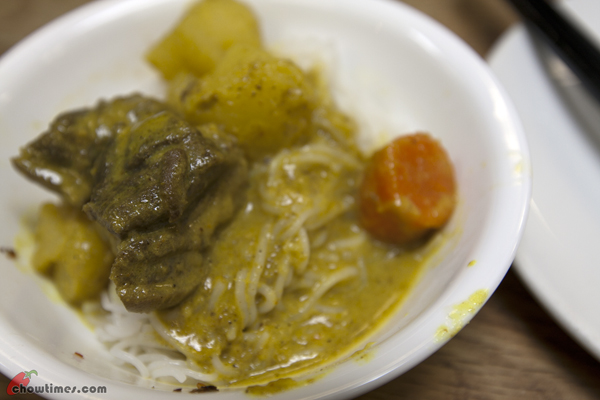 You can choose the Goat Curry to be served with rice or vermicelli. We had the vermicelli. The goat meat is kind of old and is not tender (did not expect it to be).

The best part is really the rich creamy curry which we enjoyed a lot. We actually had to ask them for one more plate of vermicelli because there were a lot more curry to lap up. 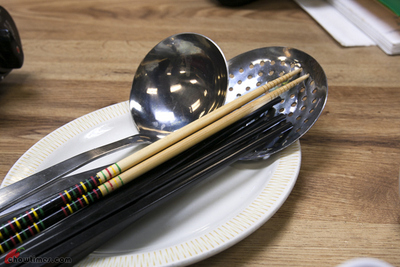 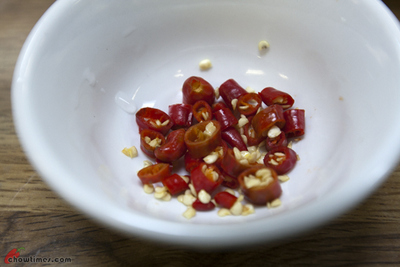 The star dish of our dinner was the hot pot which the Vietamese called it the Lau. 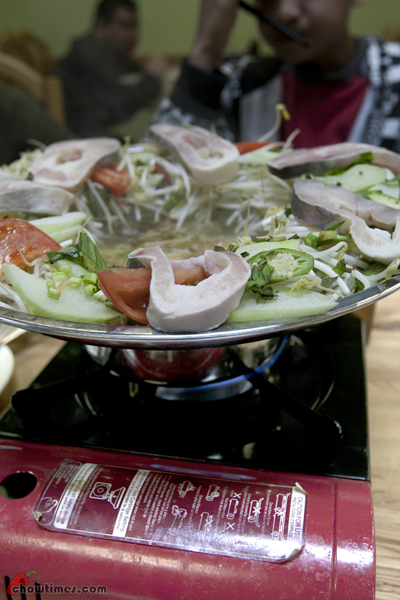 This is definitely unique. The hot pot they served this in is nothing like I’ve ever seen locally. The owner told us that they bought it from Vietnam. It looked like an inverted top hat. The center holds the soup and the rim is where the ingredients are held.

They came by several times eager to show us how to eat this.

They actually have four types of hot pots. They are: 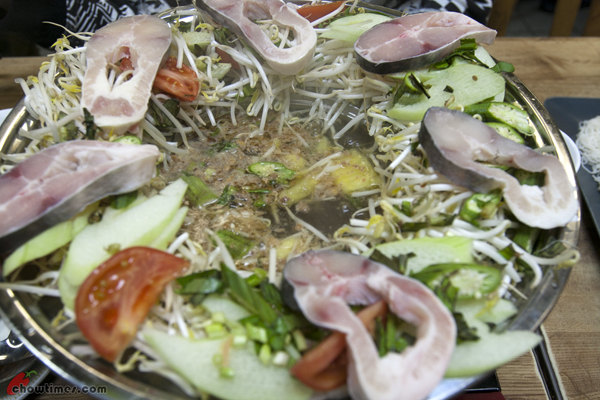 We got the hot and sour fish version which the owner recommended we try. This is quite expensive. Maybe I should say that this is expensive for a Vietnamese food because we do not associate Vietnamese food with something that costs over $20. But to think about it and comparing it with other (Chinese) hot pots, this is not too expensive.

This hot pot costs $28 and is large enough to serve 2 to 3 people. On the menu, this is called Canh Chua Ca Hoac Tom, Thit Ko To or in English, Hot & Sour fish (Basa) or Shrimp Soup with Caramelized Pork or Fish.

Actually for $28, we also get another dish. The above is the Kho To Southern Style (Saigon). If ordered this by itself, this is $12. So, $28 for the whole set is quite cheap considering.

It is simply called Caramelized Pork in English.

This is so good! 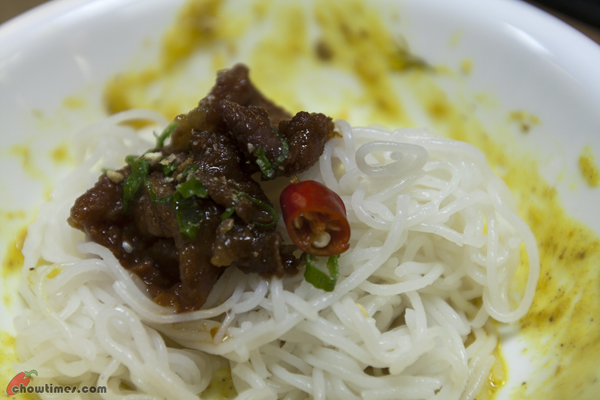 This caramelized pork has the delicate sweetness of a light caramel balance the vibrant saltiness of fish sauce. What I like a lot too is the liberal application of freshly cracked black peppers on it. So juicy … so sweet … so nice.

We were told there are several stages in eating this. Kind of fun.

First we bring the broth to a boil and then we push the fish into the broth first.

The fish (basa) has a quite a bit of small bones. So we had to nimble picking out the bones. Kind of annoying actually. 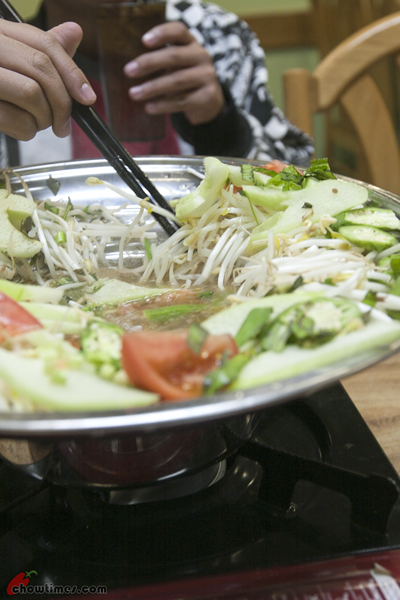 When the fish are all taken out, we were to push the rest of the ingredients from the rim into the soup.

The rest of the ingredients consists of bean sprout, lady finger, tomato and Bac Ha.

The one ingredient I had never noticed before is the Bac Ha (a spongy kind of vegetable). Suanne had this before and used that in the Community Kitchen. If you are curious to learn more about this, check this post.

Then we are to pick the vegetables from the center of the pot to eat with the vermicelli or rice.

We believe that the sweet and sour soup (known as Canh Chua) gets a lot of its flavour profile from tamarind and pineapple. The owner told us that this is just chicken stock.

It was only after a while I suddenly realized I had this before. It was in Hai Phong on Kingsway and Inverness. At that time, I blogged that I did not like the one in Hai Phong. It was way too sourish for me.

But this one is good. I just enjoyed this a lot.

Price wise … not too bad.

It is certainly one of the higher tabs we had to pay for in a Vietnamese restaurant but we are not complaining.

When I asked the owner what the words Mui Ngo Gai means, she went to the kitchen and brought the above out to us.

I am quite excited about this restaurant. I felt that they are moving in the right direction by offering more than just pho. It is like what it was with Chinese food about 20 years ago where we get a lot of generic/Canadian Chinese restaurants around. It is in the past decade or so Chinese cuisine in Vancouver had gained a high level of sophistication that rivals the best in the world.

A few more trivia for you about this restaurant before I end:

Let me know what your thoughts are … does a restaurant like this excite you?