Updated: 24th Oct 2014; This restaurant is closed according to Urbanspoon.com.

Let me get the confusing stuff out of the way first.

There are three Chinese restaurants called The One. None of them are related to one another. Thank goodness all three of The Ones are located in different cities or else you can just imagine the confusion it will cause. 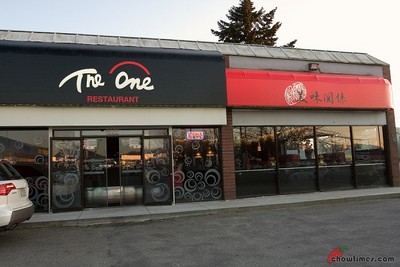 In Burnaby, The One (above left) is a Taiwanese restaurant which is actually an offshoot and more modern cousin of Lau Shan Dong.

In Richmond, The One (above right) is a Hong Kong Style Cafe which had opened just recently.

Not to be outdone, Vancouver also have their own The One!  Like the other two restaurants, the Vancouver version of The One serves yet another type of Chinese cuisine — Shanghainese.

I mentioned it before earlier that there are actually a lot of restaurants with the word ONE in their name. The ones at the top of my head are:

This one is located on Granville and 41st. For those of you using Granville, I am sure you have notice this place.

Although the official English name of this restaurant is The One, their Chinese name sounded a lot better. It is simply called “Nong” which meant a thick sauce … something like that. I noticed that their calling cards, they have the alphabetized word “Nong” printed on it. I am just speculating that they are in the process of changing their name to Nong. 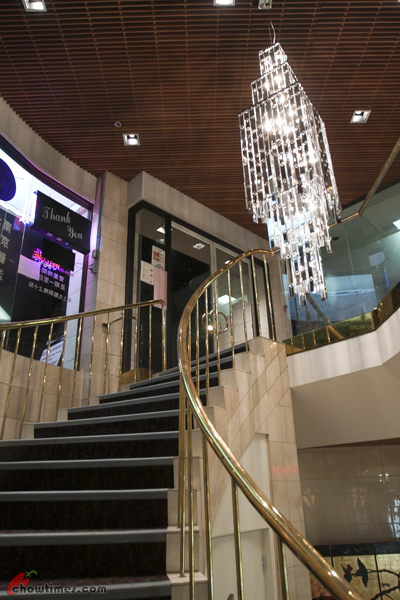 JS wrote to us about The One almost two months ago. She was raving of the food she had that she went back twice. And it was such a long email too where she went into the details of eleven dishes she had. I was so impressed that I just had to try it … well, at least I wanted to do the trilogy of THE ONEs in Metro Vancouver. LOL!

It took almost two months to organize but JS eventually managed to get a group of the regular chowhounds together.

The One on Granville looked a lot better than I expected. It is clean in a modern and bright setting. While it is not a high end restaurant, they managed to tastefully decorated the place — complete with small, nice chandeliers. The dining hall is quite big and spacious.

The waiters and waitresses are smartly dressed in suits and tie. 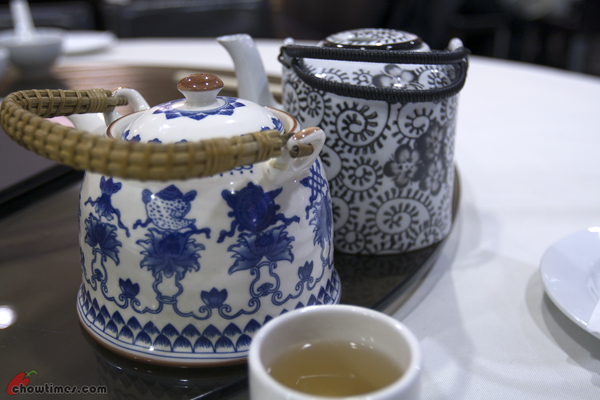 Service is prompt. You know service is good when you are not aware of it and yet you had everything you needed at the right time. That was how I remembered that night in terms of service.

Their Chef’s Special wasn’t what we are here for. But the interesting thing is that their Xiao Long Bao is just $1 for three. This has to be the cheapest XLBs in this side of the world. For all I care, it could even be cheaper than the frozen ones in T&T.

You know, I think people get a kick out of paying $1 for 3 XLBs than getting them free as part of a free-XLB-if-you-spend-above-$30 kind of deal. 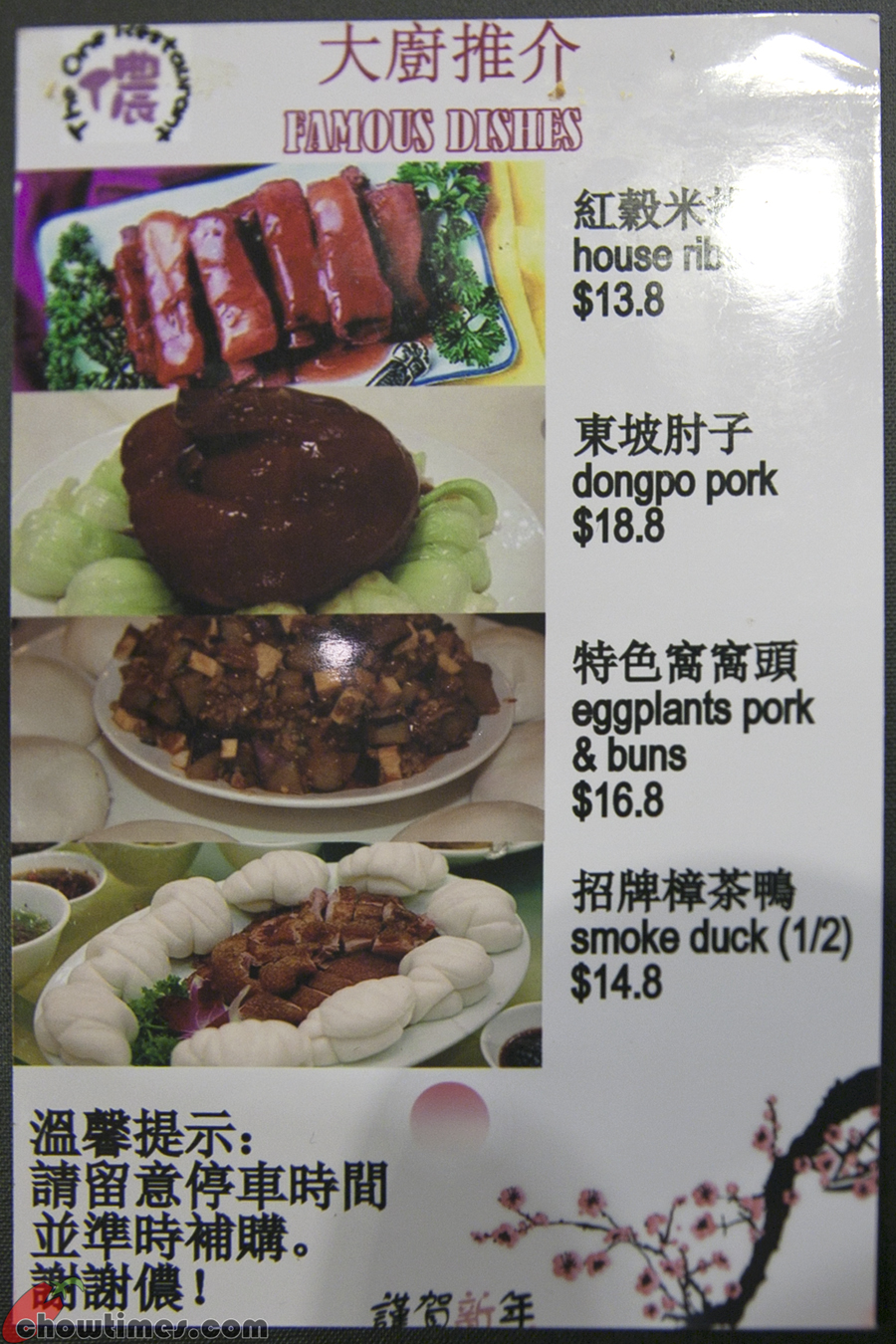 The above is in the front of their menu. It’s their signature dishes. That was easy to decide. We all immediately agreed to order all four of the dishes.

As you can see above, their prices are not on the cheap side. Not that I expect it to be cheap here but the prices does jump out at me. With menus like this, I always have to keep tabs of what I order.

Actually I left all the ordering to the experts at the table. With so much to choose from and at the end of a long week, I am just contended to just sit back and enjoy the food and the company.

We got a few appetizers to start off with.

Jelly Pork. This is quite common in northern Chinese restaurants. I was not much of a fan of this but this one is different.

It is nicely presented and made to look exactly like meat with a layer of fatty skin on top. Most of the ones I had tried before are more jello than they are meat. So this is quite a nice change. 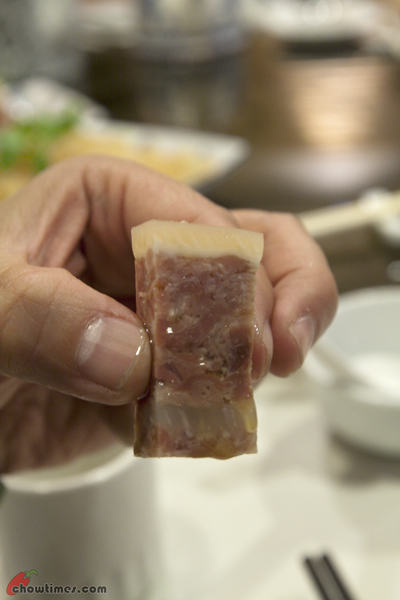 You know what the first thing that came to my mind when I saw this is? Molecular Gastronomy! This is … constructed from different ingredients to make it look like a piece of pork. That triggers in my mind that it is delicious because it is “meat”. LOL!

The Jelly Fish ($7) is definitely NOT molecular gastronomy despite having the word “jelly” like the previous appetizer.

Cold and spicy and carries the distinctive sesame oil flavour. The texture is what this dish is all about … and it is crunchy as it should be. 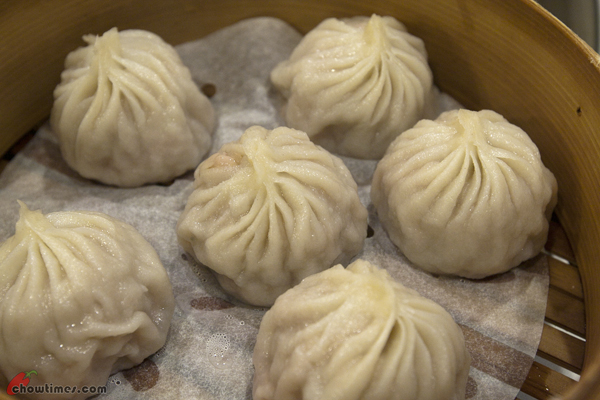 The XLB is on the other hand the worse dish of the night. Yeah, like they say … cheap things not good, good things not cheap. 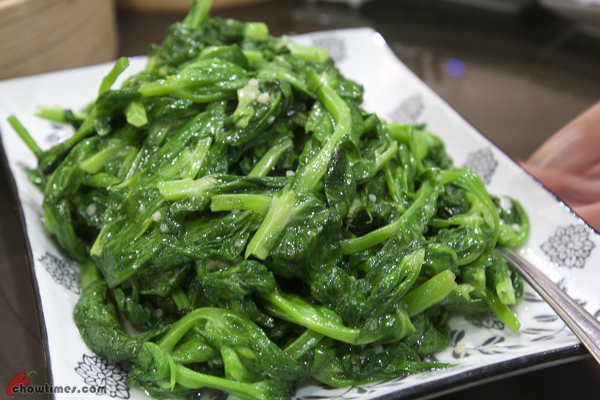 The Pan Fried Pea Sprout ($17) looked like older stalks but they were OK. It was a dish I had a lot of of. I just like the crunch and the subtle taste of it. 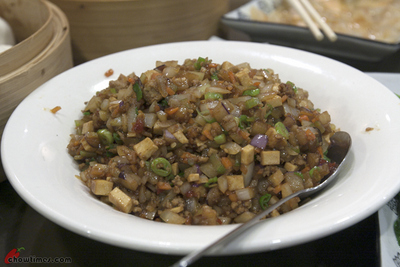 The Stir-fried Pork and Eggplant with Bun ($17) above is one of their four signature dishes.

Besides the pork and eggplant, the fillings include tofu, carrot, eggplant, celery, onion, green onion. I felt it was too “busy” that it’s just a mash of food without one dominating taste. 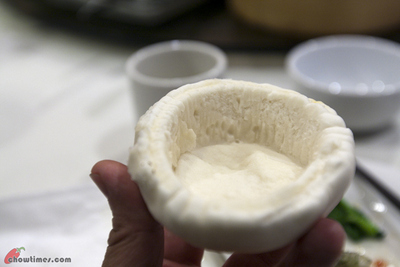 It is served with an Eastern China style bun which is shaped like a saucer. The bun is sweetish, very much like mantaos.

Suanne was saying that it is not practical. While it holds the fillings nicely initially, the fillings are hard to hold in when the bun-saucer is half eaten. I remember I just took one piece. It didn’t appeal much to me.

What made me very happy that night was this one above.

This is what I call food!

Look at it from the other side. Isn’t it perfect?

This is another of their signature dish. It is called the Dong Po Pork Hock ($19). You know, in all the dinners I had with Grayelf, she ALWAYS insisted that we order this. I am in agreement all the time.

Mind you, this dish is not all unhealthy. This is actually a very healthy dish. I mean, just think of all the spinach you are having too. 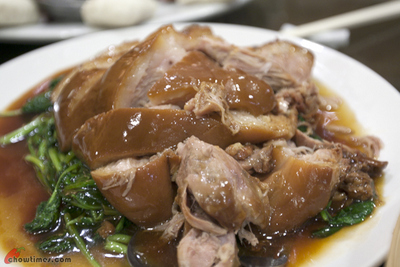 I had to swallow my saliva discretely as the waitress carve the pork hock gently. I just take my eyes off it.

Yeah, this is THE ONE dish to get at THE ONE. 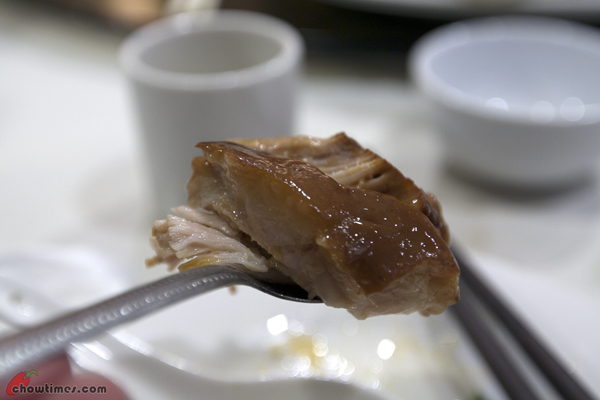 The fat is the best part. LOL! It melts in your mouth and it has a heavenly texture … very smooth. Even the lean part is cooked to perfection.

The good thing is most shy from eating too much of this. Good … because it means more share for me. 🙂

Suanne was saying that the sauce is not “nong” enough and that it should be stickier and thicker. It was just perfect for me. 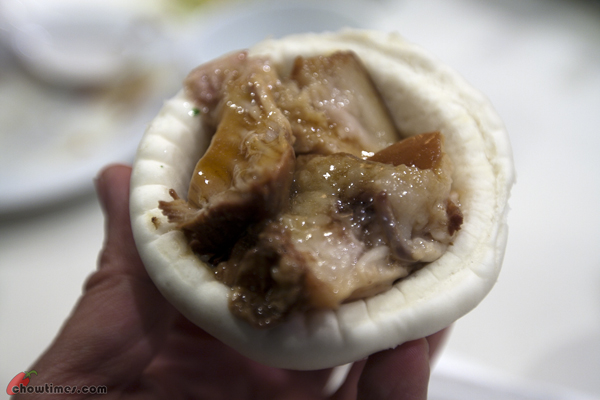 I even took the saucer-bun and filled it with the really good stuff. It is definitely better than the pork and eggplant mishmash. 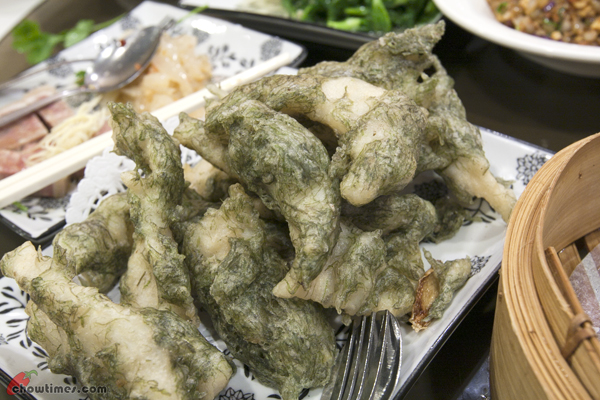 The $15 Deep Fried Fish Fillet is certainly an interesting dish. It looked moldy isn’t it?

The green stuff is seaweed actually but I can hardly detect the taste of it. The fish is crispy and even though it is deep fried, it is not greasy.

That is about it … quite tasteless. Just something nice to munch on and move on. 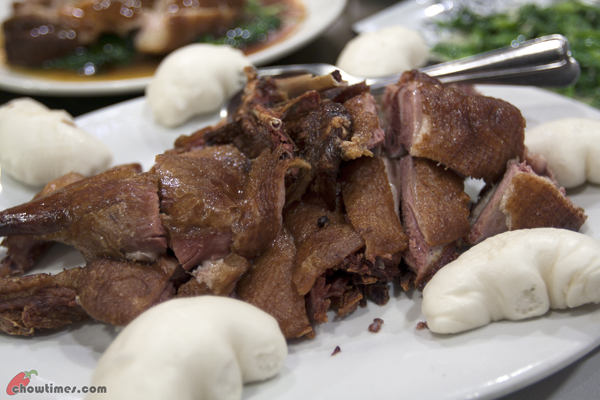 Smoked Duck … another of their four signature dishes.

They served it with some plain bun which was a mystery to me. There are no sauce in this dish to go with the bun. It is dry. So, I am not sure why it’s there. Maybe … maybe it is supposed to signify clouds … like a duck flying in a cloudy sky? 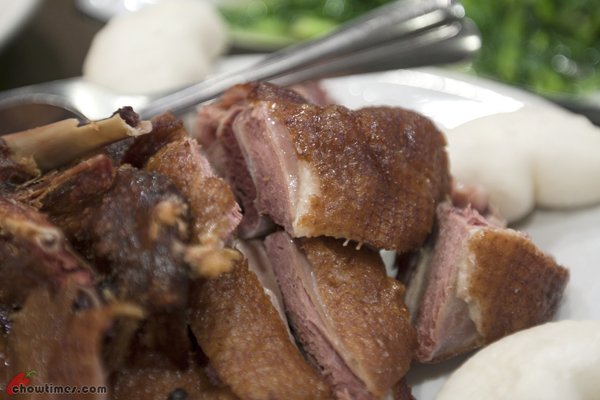 It is quite moist –> good

It is still juicy –> good

I like the crisp/burnt edges but I am actually quite put off by the reddish tinge on the meat. Yeah, I know it is smoked duck and not roast duck. I just think that duck meat should be brownish.

The Shredded Pork Fried Rice Cake is $13. The rice cake is just barely cooked and chewy. It has pork and bamboo shoots in it.

But I definitely like the rice cakes from Ningtu … they make the best rice cake dishes in town. I always have rice cake in Ningtu but not else where. Go to this post and see what I mean. 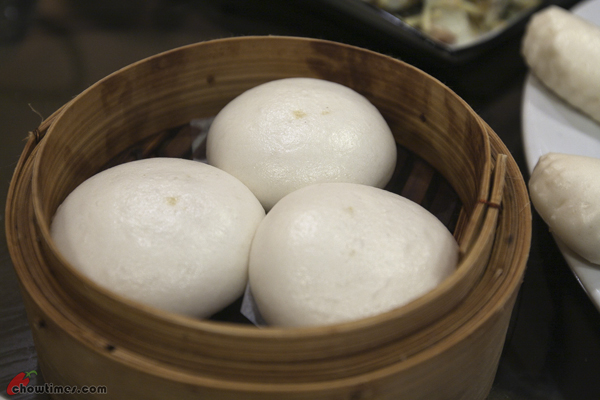 Apparently the order sheet indicated that we have to let the server know when to serve this. The problem is most of us does not read Chinese and I was not aware until Suanne recognized the words. 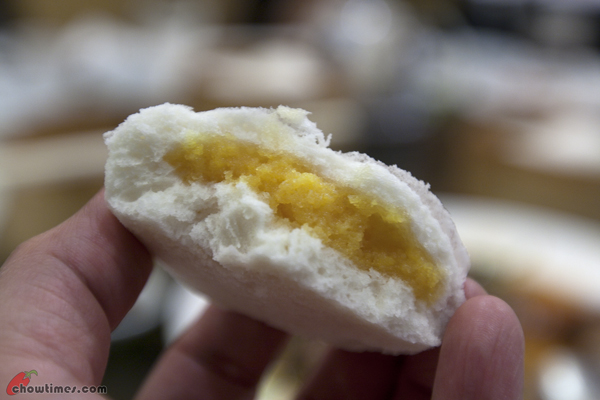 For something you had to ask for them to serve this tells me that they will only prep it as and when you want it. Timing has to be perfect and you are supposed to eat this immediately. Sounds good, eh?

The lightly salty egg yolk filling is there but it not runny or oozy as I thought it should be. This is kind of lost on me as I expected a lot more from it. 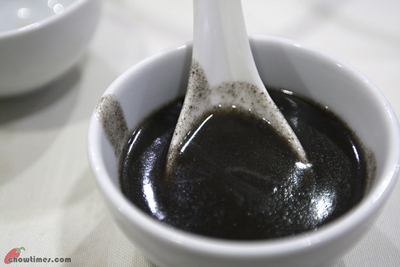 The Almond Cookies and the Black Sesame Sweet Soup were free. It was just good, nothing spectacular really.

It worked out to be about $23.50 per person after including tips. So it was not bad price wise.

There were seven of us that Friday night. I needed that time out and even though I was quite tired after a long day and a long week, it is just fantastic to be able to share good company and good food with good foodie friends. I needed that.

Hit and miss is how I will describe the meal. What really scores for me is that pork hock — to me it was as perfect as anyone could make it.

Thanks for organizing this JS, TS, Grayelf, J and fmed … I had a good time.

BTW … just so you know … the underground parking is free after 6pm. However, you need to note the stall number and let the restaurant know.