Updated 23rd Oct 2014: This restaurant is closed according to Urbanspoon.com.

It was cold. It was damp.

And we were hungry as we drove along Kingsway looking for a place to eat. It was past 2PM already and we only had a cup of coffee and shared a bagel between us since morning. We were telling ourselves that half of the restaurants would probably be closed for the mid day. 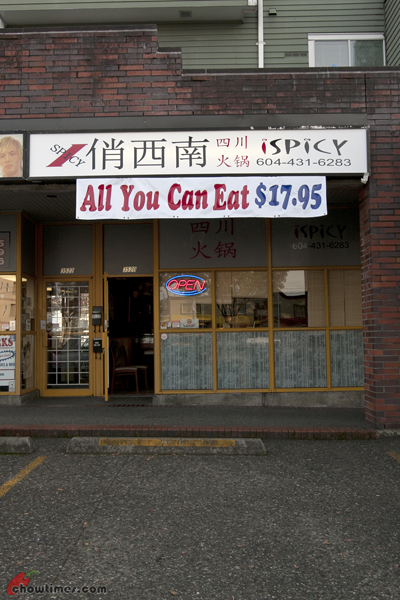 I caught a glimpse of the “All You Can Eat  $17.95” sign outside the restaurant and said Suanne maybe we should just try this place. It’s not in our list of restaurants to-try but I fancy hot pot. It was after all a cold day. Nothing but a Sichuan Hot Pot to spice things up.

iSpicy is an odd name. It sounded more like an internet cafe than a traditional hot pot restaurant. We went in and we were warmly welcomed. The owner and his wife barely speaks English. We are OK because we don’t need to know a lot of Chinese when it comes to AYCE and hot pot.

But as it turned out, we had a very interesting time there. We had a glimpse of what it is like in the struggles of a restaurant owner. We saw a human side of a smallish restaurant trying their very best to remain relevant in a very competitive sector of the economy. More about that later.

iSpicy is a really small restaurant. They have seats for about 20-25 people. Not big for an AYCE hot pot.

It is only natural, I guess, to expect a smaller hot pot restaurant to charge cheaper. iSpicy’s hot pot is on par with other AYCE hot pot restarants in town. It is $18 for adult.

The choices on the menu is smaller too. We know that for places with larger menu, most of the menu items are fluff. To us the most important thing is the quality of the meat, the beef in particular.

I was a bit confused about the hotpot base. They have a few sizes — small, large and extra large. They crossed out the extra large because it really doesn’t make sense. In most places they charge by the pot and not the size of the pot. The hotpot base does not have the fancy flavours that some places has. It is the spicy soup base that is their primary offering.

As usual we opted for the half-half and said that for the spicy side, it has to be “da-la” (big spicy). The owner told me that I should just go with the middle spicy owe as his da-la might be too much for me. Good thing I did not stick to my original choice!

The mixed soup base is $8.50 extra. The non-spicy side is made of pork bone. We were asked to taste the soup and he pointed out that the broth is not salted.

We also tasted the Sichuan soup base. It was really spicy. It had big dried red pepper pieces swimming in a very visible layer of red colored oil.

We later learned that the chef made the sichuan soup base himself from scratch. He told us that it takes … five hours to fry a batch of chilis and spices to get to this level of spiciness.

We also learned later that he is a chef from Chengdu, Sichuan and has over 20 years doing nothing but Sichuan hot pot. He said that he still has a restaurant in China. 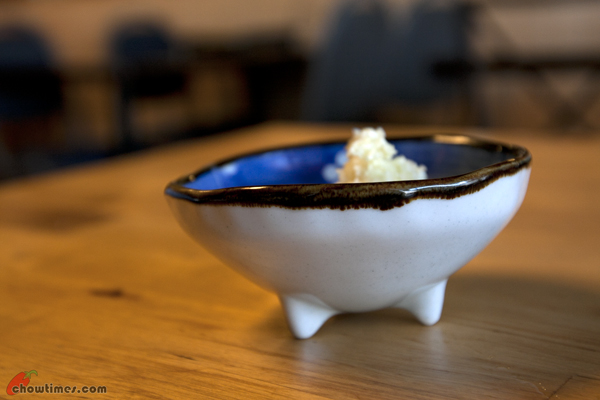 Ding. That was the first word that came to my mind when I saw that saucer of condiments.

A Ding is always three legged. In ancient China, a Ding is used for ceremonial purposes. It also has another purpose … and that it is also used for cooking. I recall reading a book that the Chinese Ding is the oldest type of vessel created specifically for cooking. Before this, humans were cooking over naked fire and with the invention of the ding, it is humankind’s first foray into culinary journey into what we have today.

I always thought that bit of info was fascinating. If I had all the time in the world (which I don’t!) I would like to study about ancient cuisines around the world and how it came to evolve to what we have today. He he he … yeah, maybe I’ll do that when I retire.

They were generous with the free condiments. Some places even charge you extra for these. Here they gave us a large serving of garlic, chili, green onions and cilantro.

Some condiments were extra though. The sesame paste (the brownish sauce) is $1.50 per serving. We got two but Suanne practically had both of them. She stole from my bowl without me noticing. She is good at doing that.

I told your earlier that we learned a lot of this restaurant and since the owner and his wife doesn’t speak English, the question is how did we learn all this. Well, the owner’s teenage son came in to help and he speaks perfect English. We had a great time chatting with him and his father was at times egging him to tell us more about his business and about Sichuan hot pot. LOL!

It was only after the meal that the son told us that the sesame paste is just OK. The way people eat SPICY hot pot in Sichuan is to make a dipping sauce out of sesame oil, vinegar and cilantro. It brings the flavour of the meal out perfectly, he added. Too bad we were already done eating but we were quite intrigued by that.

We were told that for the non-spicy broth, people should use the sesame paste as the dipping sauce (the one we had).

The marinated beef is their most popular item. It was tender.

The lamb was particularly good too. We can’t tell this from beef until we tasted it. Not many Chinese likes lamb saying that it is gamey. Not us. We love lamb.

If there is one meat that Chinese love a lot, it is pork … and chicken, isn’t it?

The beef, the meat we look forward to always in hot pot wasn’t as good as we had in other places. Our favourite hot pot restaurant remains as Fatty Cow on Victoria.

The beef here is leaner than I like. The ice crystals on the beef makes me think that they just took this out of the freezer. 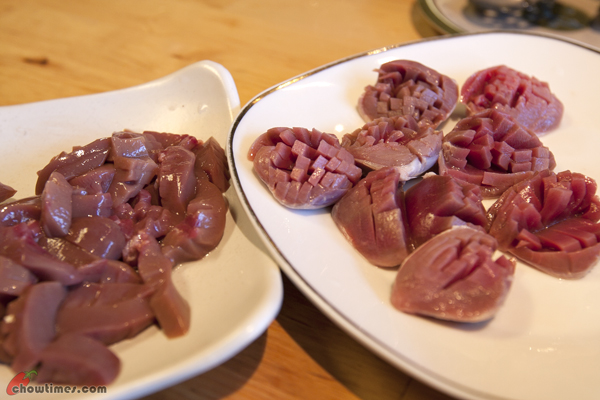 We also ordered gizzards (turned out to be very hard and crunchy) and liver. They are small and when it gets into the broth with all the chili, spices and peppercorns, fishing them out is like looking for a needle in a haystack. 🙂 Yeah, it was hard to get to them. 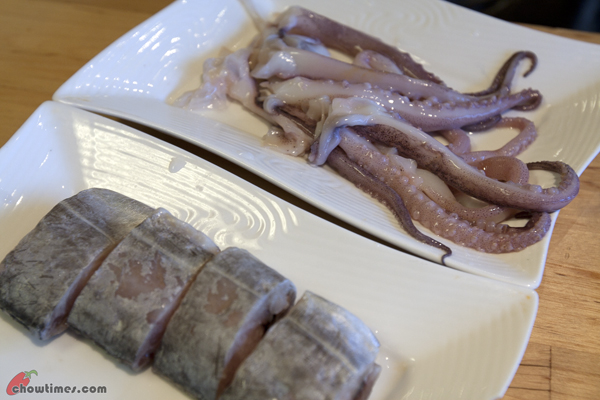 The fish above is very fishy – we didn’t like it at all. As a matter of fact, we took a bite and decided we did not want it anymore.

The food here is hit and miss. Anyway, we devoured mostly the beef and the lamb … he he he … to get our money worth.

What we enjoyed a lot though was the spicy broth. It is different from the rest and it has a real kick to it.

One thing we also learned from the chef is that we should never cook green leafy vegetables in the spicy broth. This is because they absorb all the chili oil and makes the vegetables really spicy. Now I know why I often choke eating spinach out of the spicy hot pot broth.

There were a lot of chilis in the broth. So I scooped out the chilis because it is too “busy”. Both the owner and later on the son, told us that we should not do that as it is this chili that gives the meat the flavour. They told me like I made a big mistake doing it and I broke protocol or something. 🙂

So I said Suanne and I had a great time chatting with the owner’s son. iSpicy had opened only for two months. The family moved to Canada about 3 years ago.

We were told that they offer authentic Sichuan hot pot and that not many restaurants can mimic their broth. Business was great in the first two months. iSpicy was known through word of mouth in the Chinese speaking community. They told us that people were raving about how authentic their Sichuan hot pot is and that they are the best in town. All these were in a Chinese forum called vanpeople.com. This resulted in people lining outside for a table on some days.

Well, I stay out of it but I am a good listener. But I can sense the pain and frustration they had … and how the internet can be used to make or break a restaurant.

There are many hot pot restaurants in town and I do think that iSpicy has a challenge ahead dealing with restaurants like the newly expanded Spicy Legend down the road.

Here are my thoughts. I think their prices is not competitive enough. They do not have the volume to make a big variety of choices with better meat (quite unlike Fatty Cow who actually also owns a butcher shop). Their soup base is what sets iSpicy apart from the rest.

Tags: All You Can Eat, Hotpot, Restaurant Review, Szechuan, Vancouver