I can’t quite explain it.

But I’ll try and it is based on my very personal judgment.

There is something about Luda that jumped out at me when I first came across this restaurant more than a month ago. Something tells me that it is a restaurant that can’t be ignored. 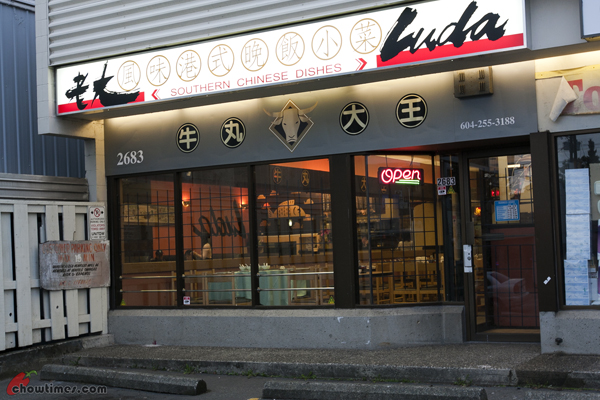 Maybe it is the simplicity of the English rendition of name, Luda.

Maybe it is that the Cantonese name, Low Dai, means Big Brother. Just like a Chinese gangster would address his boss.

Maybe it is because of the billboard outside the restaurant which I rarely come across … well, not billboards as big as those you see above. 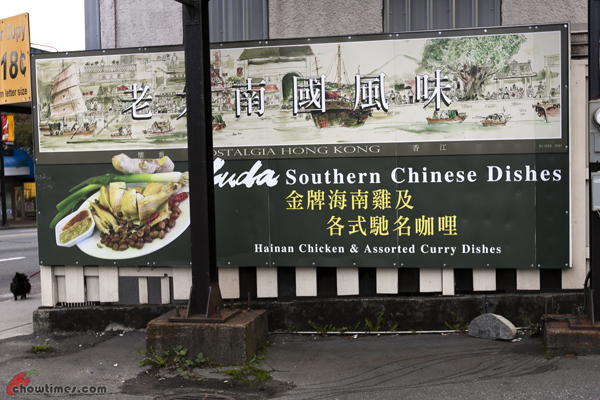 Maybe it is also because they mention their dishes on the signs. It says that they are “King of Beef Balls” and they also mentioned Hainanese Chicken and Curry Dishes. To me it reminds me of the restaurants in Asia where they specialize in certain dishes and they serve nothing but that one dish. I don’t see many of such specialty restaurants in Vancouver.

But I think most of all, Luda has that “Richmond-esque” that I don’t expect to see in this part of Vancouver. If Luda is located in Richmond, I would perhaps not bat an eyelid.

But in East Hastings, I felt that it is somewhat interesting.

I was so intent on eating there but I know the best way is do it in a group. That way I could order many more dishes to try. So, I organized a mini chowtimes dinner — just enough to fill one table. So I thought. That ONE table became a table of 14 people. I had to cap it at 14 because that was the largest table they had in Luda and I did not want to have a 2 table party. 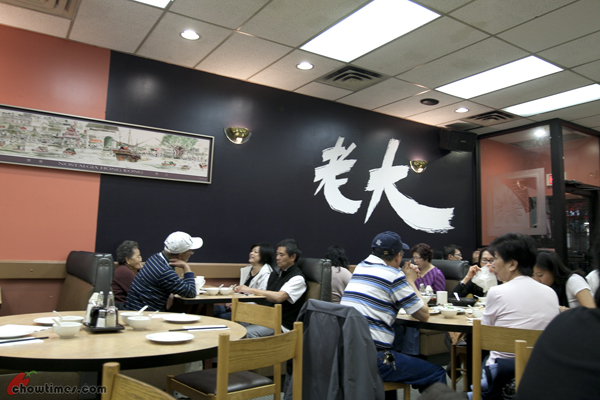 Gosh. The restaurant sure was busy. While I was focused within our large table at the corner of the restaurant, I did turn around every now and then. It is remarkable how busy and popular this restaurant is.

The decor is modern. I like the large calligraphy Luda words on the wall. It looked like it was taken straight out of some gangster movie from Hong Kong.

And they are seriously under staff. It was not just our table but I can see that the waitresses were having a hard time trying to keep up. 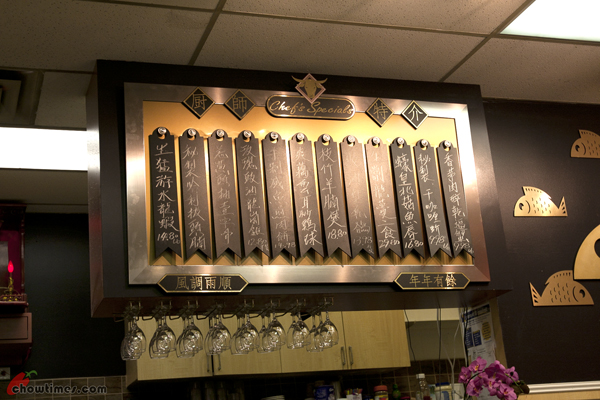 Too bad I don’t read Chinese. They have a seasonal menu on the board at the back of the restaurant.

One of them read Lamb Hot Pot. I had wanted to always try the award winning Lamb Hot Pot in Excelsior and since Luda is related in someway to Excelsior, I thought I want to order this. But there were no takers that night … so yeah, we did not order that. 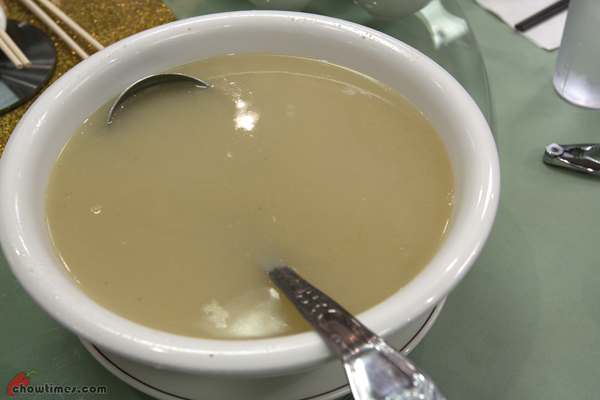 The meal started off with the Pork Stomach Soup. I selected this because this is a dish that must be pre-ordered one day in advance. Suanne says that I always want any dish that needs pre-ordering without considering what it is. 🙂

This is somewhat expensive. It is $38. The soup is murky and quite peppery. However, it seems like it did not go through enough cooking time (Chinese “for hao”). 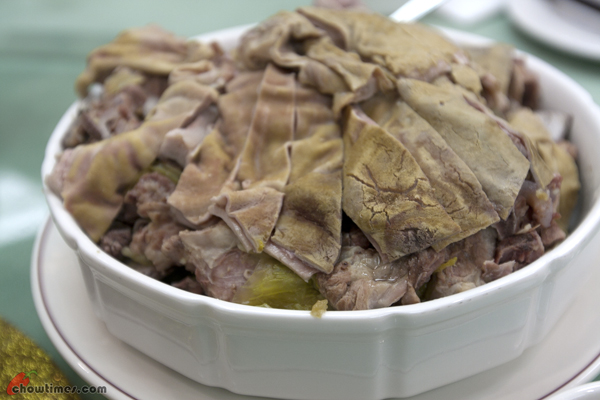 The ingredients of the soup which is pork stomach and pork bones were served on the side. I was quite happy and thought wow, so much pork stomach.

But no … it was just a layer of pork stomach arranged nicely at the top. Just underneath that are pork bones. 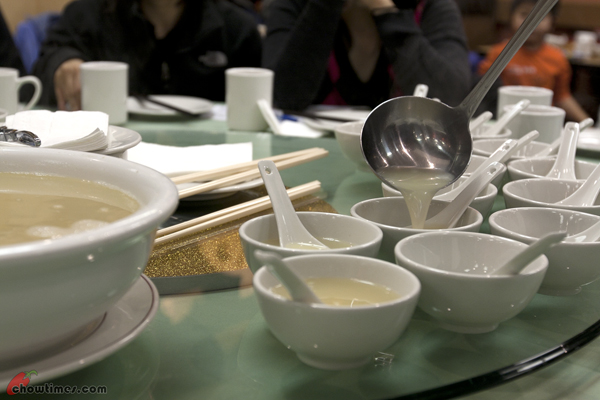 The waitress was so busy that they did not even serve the soup for us.

So guess who came to the rescue? Uncle Ben. The table was saying that I looked very professional serving the soup. You know, with one hand at the back and all. He he he … I copy that style from Doug. 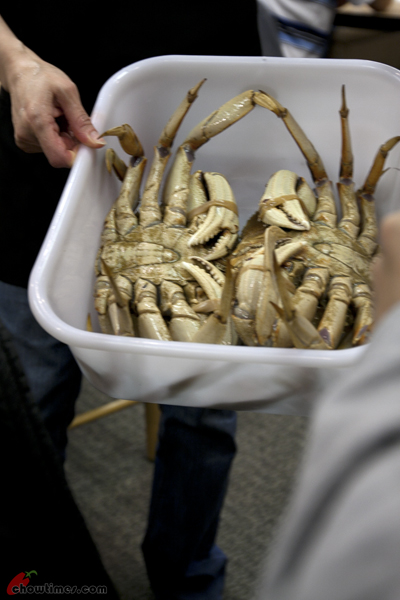 Crabs was one of the dishes we are here to try. I heard a lot about their curry crab.

The crab was about $9.98 per pound which I thought was cheaper than I expected. We had two large crabs (7 lbs in total) and decided that we wanted to have it made two ways. 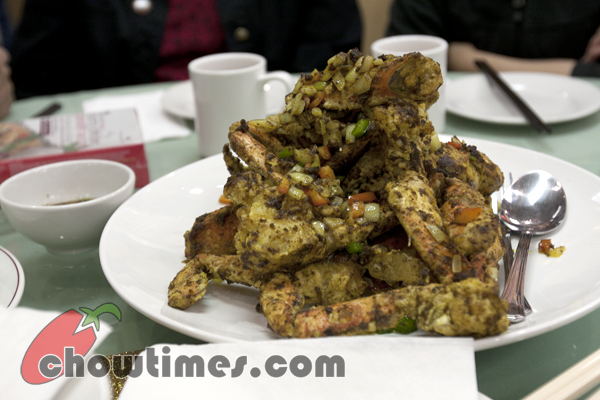 The Curry Crab was as good as they say it is. Before I came, I thought that the curry crab have curry gravy but it was not. It was just cooked with curry powder. 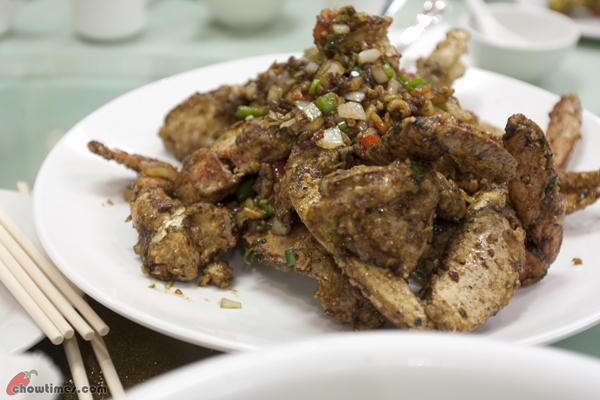 The other crab doesn’t have a fancy name to it. They just call it “Special Crab”. This one had dried shrimps in the bits that the crab is fried with.

Can one consider this Typhoon Shelter Crab?

Anyway, the table agreed that even though the curry crab was more well known in Luda, the “Special Crab” is the better of two. 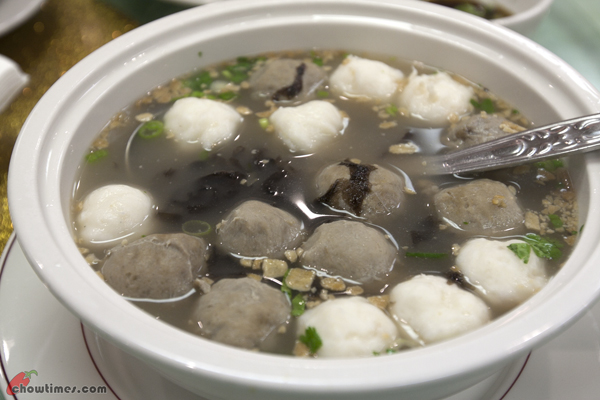 The sign outside Luda claims that they are the king of beef balls. What we had was the Seaweed Soup with Beef and Squid Balls ($14).

There wasn’t enough to go round the entire table of 14. By the time this dish came around to us on the lazy susan, all that was left was the soup. 🙂 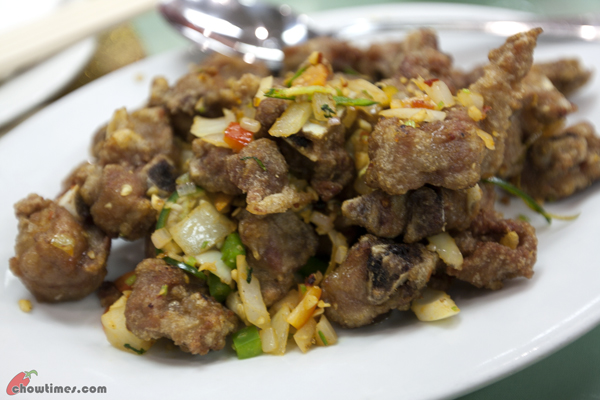 What do you call the bits of stuff anyway? I always use the word “bits” because I can’t find a better word for it. Anyway, the bits were very spicy and I enjoyed it with steamed rice. Between the spare ribs and the bits, the bits were more outstanding to me. 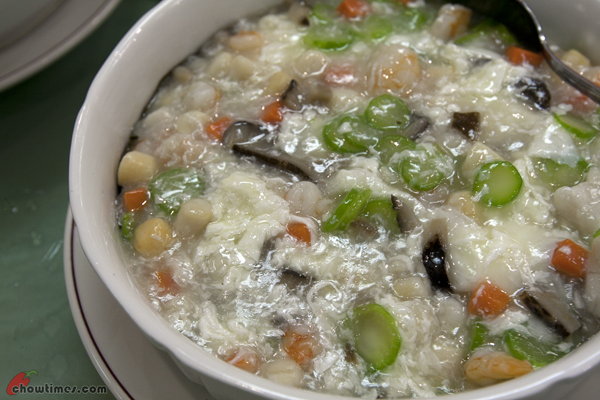 Next up was the House Tofu Special ($13). The dish was interestingly served on a lotus leaf at the bottom of the plate. I am not sure what difference it made to the taste though. It sure was not for presentation as it was hidden underneath it. 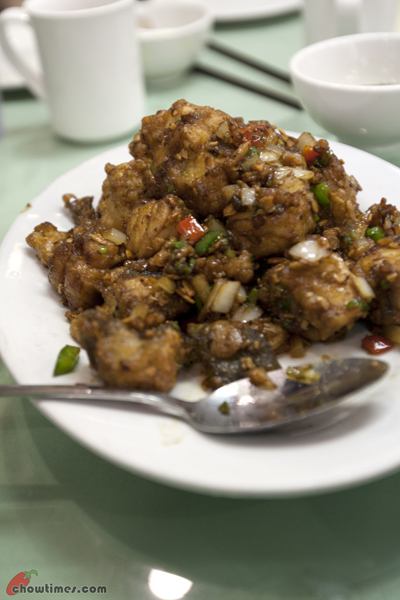 Of all the dishes, the Soy Halibut ($14) was the best dish for me that night. This dish is another dish that was often recommended in Luda.

I thought that Soy Halibut would be steamed with soy sauce. Instead it is prepared in the same way as one of the crabs — with sweet soy, garlic, onion, peppers and dried shrimp. So in many ways it is the same as the crab except that you don’t have to mess with the shell. 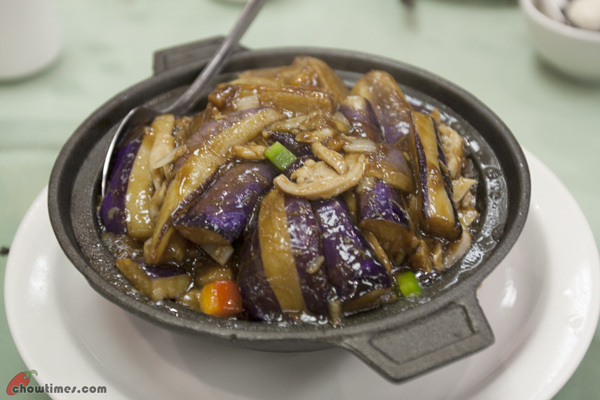 The Salted Fish with Diced Chicken with Eggplants served in a hotpot was $13. Nothing special about this really. 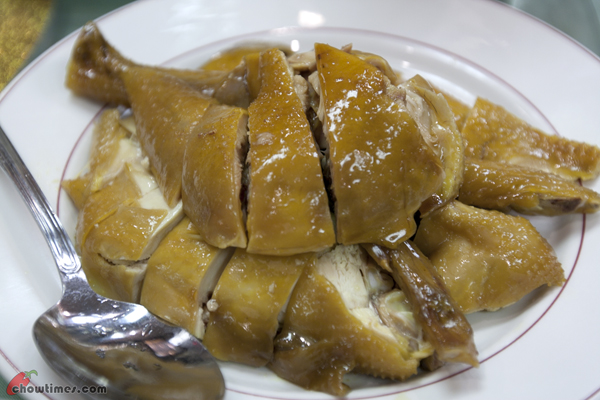 Listen to this … the above is the Soy Sauce Chicken which is $12.80 for a half-bird. Surprisingly, this dish requires pre-ordering also. Strange. First time I came across chicken dishes requiring pre-ordering. It looked like a simple dish to us.

Anyone has any idea why this dish need pre-ordering? 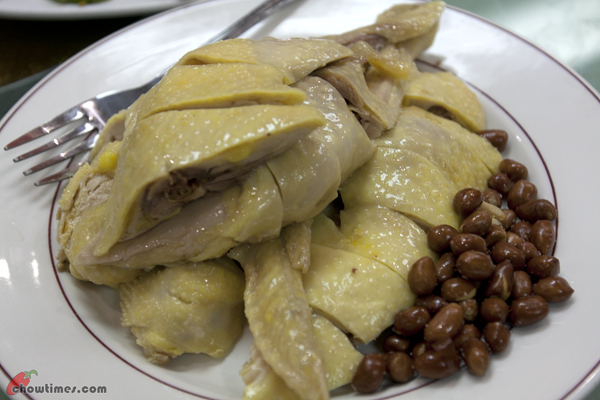 Their Hainanese Chicken is supposed to be very good. So good that it was shown on the large billboard outside. This is $12.50 for half-bird. 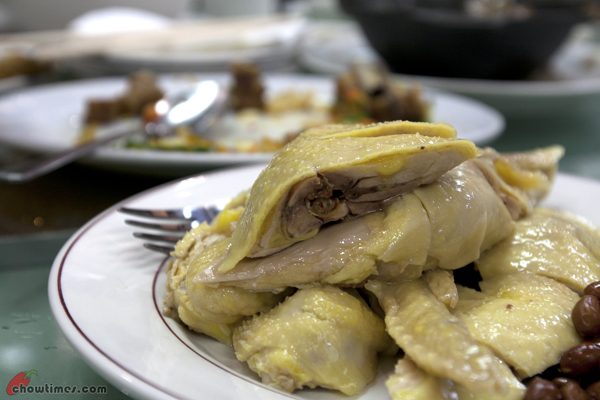 It is served cold. I felt it was not plumb enough because I really expected fat juicy pieces like the ones Raymond showed me here. 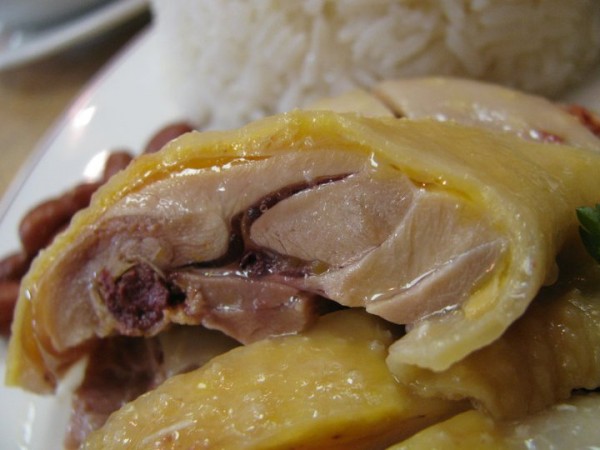 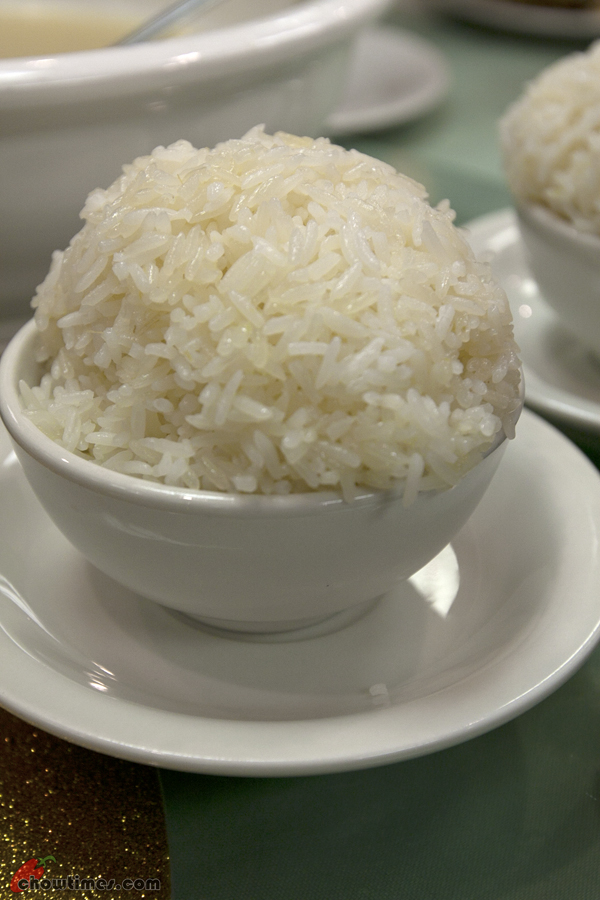 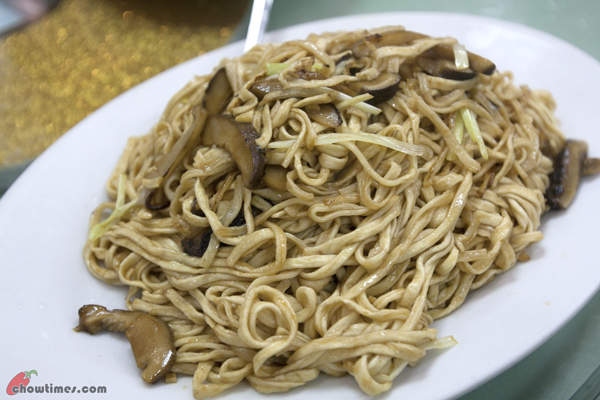 To close off, we had the Pan Fried Yee Mien ($11). This was surprisingly good even though it was just simply pan fried with mushroom. 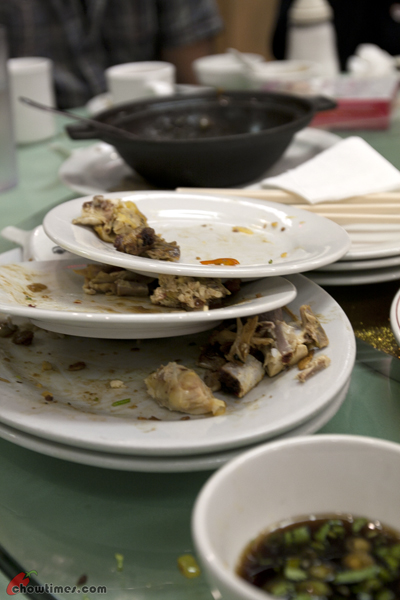 I had a good time with all the foodie friends but frankly, I did not enjoy the meal at all.

Like I said they were understaffed and it was hard to get the server’s attention. I just can’t stand dirty dishes on the table. So yeah, it was a mess.

I was hoping to get them to pace the delivery of the dishes. Instead it came in droves and everyone felt rushed seeing so many dishes on the table at the same time. We did not even really get to savour each dish properly. The dish sizes were small too. You see, Luda’s dishes are not meant for banquet style eating. So some of us did not get to taste some of the dishes.

As for the food, there were some winners but by and large the entire meal did not wow at all. 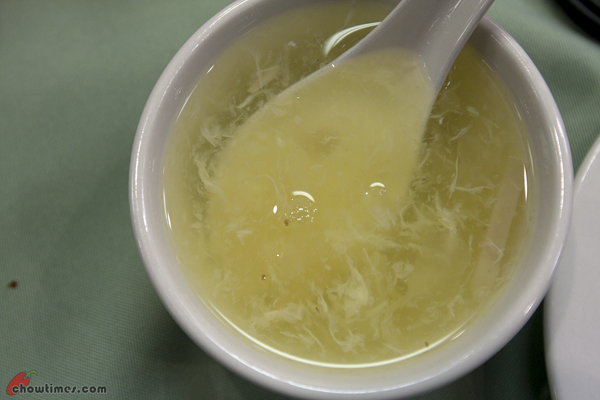 Oh … they have free dessert soup with white fungus and water chestnut. 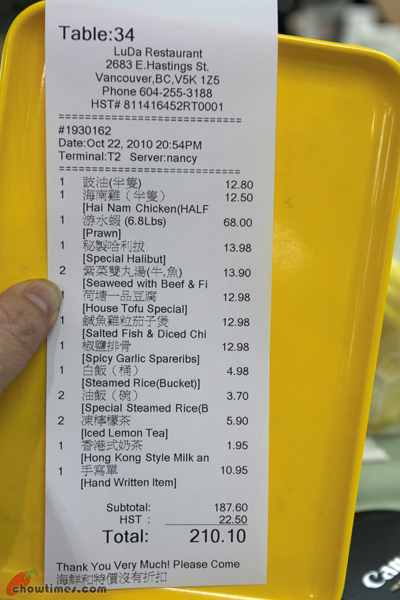 So they presented us the bill. It was just $210 for 14 people. Cheap huh? With that price, no would could complain.

If it was too good to be true, it is.

The waitress came out and told me that they forgot to add in the Pork Stomach Soup (which was pre-ordered). The billed ended up to be $252.66 before tips. Still cheap.

By then most people had left and I only had a few people chipping in to make the difference. No problem, it’s on me.

To those who attended, thanks a lot for taking the time to come out and join us in this dinner.