I will use the words “duc beet” and not “tak peed” to describe something that is unusual or special. At least this rhymes with the Vietnamese word “Dac Biet” which means the same thing.

We were out looking for some “duc beet” dim sum last weekend. Of late, we had been searching for “duc beet” type of dim sums. As you know we don’t particularly like the run of the mill dim sums like siu mai, BBQ Pork buns and har gow … stuff like that. They are boring. It is the same as salmon sushi and tuna sushi if you know what I mean.

So we went to Vivacity. This is a popular Chinese restaurant located smack in the middle of Richmond’s glutton street of Alexandra.

Vivacity used to be on No 3 Road and Cambie until 3 years ago. They were forced to move to this new location to make way for the Canada Line Construction. 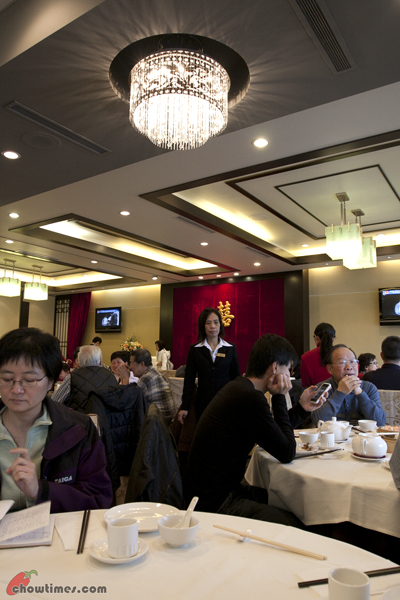 Vivacity is big. It is busy. And it is noisy.

The customers here are mostly well heeled as this is a slightly upscale restaurant. The prices were not too bad but this is not the kind of place you would expect $2 dim sum plates for sure.

Yeah, they have chandeliers. The captains are in suits and very professional. I like their service and no snobbishness in them. Remember I told you about the “tai yan” service at Jade where they gives you extra attention if you have an expensive car fob on the table? Well, the service here is not anywhere like that. We were well taken care off and the captains do go around chatting with their customers. 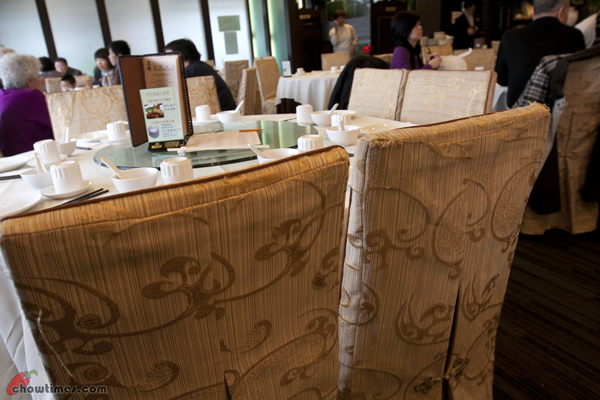 I just love this place. OK I know. I fall for things like gold colored seat covers and double table cloth. I just enjoy the ambiance here … particularly the noise and the bustle. Felt like Hong Kong.

Click on the menu above to show it in full width where you can read them easier.

The sections called Chef’s Suggestion and Chef’s Special was the two sections we focused on. To us this is where the “duc beet” dishes are found.

Normal dim sums are $4.00 to $4.50. Their special dishes are $7 to $8 but then they are bigger servings so it is not that expensive. I would say that their prices are comparable to most other places of similar class.

Actually, come to think of it they do not have a lot of “duc beet” dishes.

Several friends told me that their signature dish is not a dish. It is a sauce. They make great XO sauce.

We almost forgot about it until we noticed that on the table next to ours. As they were just seated, the captain brought over a saucer of the XO sauce to their table even before the tea came. The captain personally delivered that because the customers apparently is their regular customers.

We had to ask for it too. That was even before we ordered our food and we did not know of any dishes this would go with. We just wanted to taste it.

Their XO sauce is not spicy but particularly shrimpy. We all like it.

Remember to ask for it when you are here if they don’t give it to you.

The Deep Fried Crispy Milk Custard ($5.35) was duc beet to us. It came in a dish of ten pieces and served with granulated sugar on the side.

Actually the sugar is … not necessary but it sure enhanced the sweetness. Yeah, I ate it with the granulated sugar … much sweeter.

The outside skin is slightly crispy with barely any hint of oil. On the inside it was moist and creamy with a slight sweetness from the milk custard.

This is a good dish which I think many people will like. 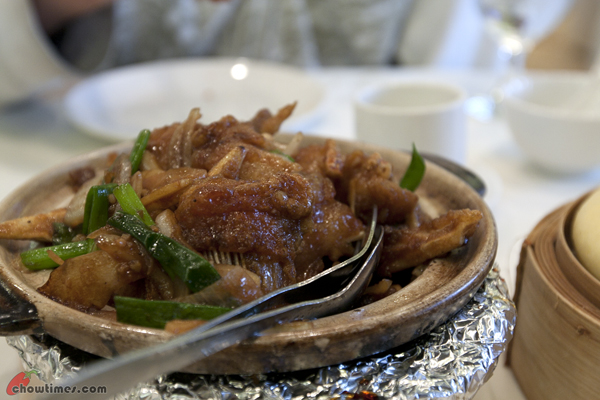 Suanne loves fish heads and fish belly. She like picking the flesh from the bones. I know … not many people, particularly non-Asians, see little point in a dish like this.

The Fish Head & Belly Hot Pot was $9. The fish parts were deep fried separately with big pieces of bone in. It was wonderful and juicy. All the “jup” (sauce) is not to go to waste. So we ordered steamed rice to lap up the “jup”.

But that is the whole point. These type of meat has added flavour and texture unlike filleted meat. It is a lot of work I know but it DOES taste better.

Other than the fish, the ginger and green onion is great, especially those that were caramelized and they stuck to the pot. Scraping off the pieces from the sides of the pot is the best part.

Suanne ate the lion share of this dish. At the end she had the highest mound of leftover fish bones on her plate.

Yup, for this one we spied our neighboring table and asked the captain for this one. Apparently this is not on the menu and it is one of those items they bring around to the tables. Ask specifically for this … you will love this.

This is called Empress Bun and is $4 for a plate of four.

It is extremely light. Any lighter, I think it will float in the air. 🙂 Just kidding.

But just look at the bottom of the bun. I was just resting the bun on my thumb and it made a dent on it.

As you can imagine, the bun is sweetish. As for the filling, I think they are limited by the ability of the lightness of the bun to hold it in.

We would not have ordered this if the name did not have the word “XO Sauce” in it.

This is called the Stir Fried Rice Roll in XO sauce ($8) on the menu. 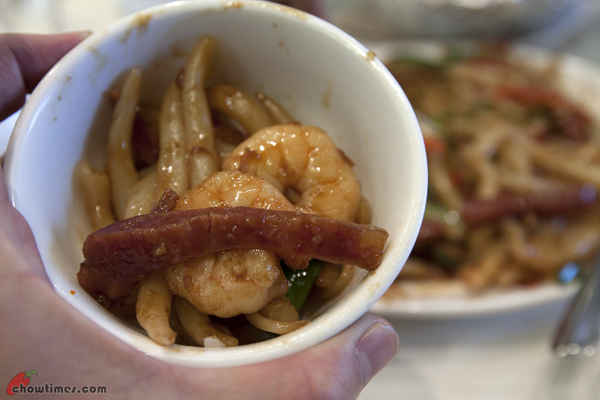 Perfect execution. We all like it a lot. For $8, it was quite a good serving enough for two or three people at dim sum sizes.

I like the long strips of Chinese sausage which was very good. The prawns were of respectable sizes and springy.

We had always called this type of noodles ”Lo Shee Fun” which is translated as “rat noodles”. Does Cantonese people from HK usually call this the same too? 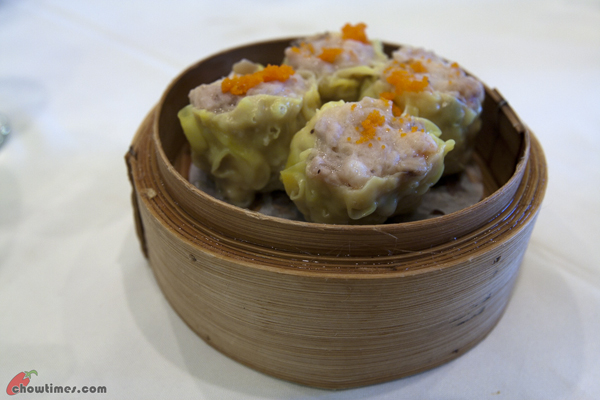 Our boys wanted the Steamed Pork Dumpling ($4.35) and so we ordered this. They loved this but I thought it was nothing particularly special.

The captain recommended us the Steamed Chinese Sponge Cake with Nuts ($4). We had so much food already, we all decided not to touch this but have this packed to go.

If we knew it was this, we would not have ordered it. It’s not that we don’t like this type of dim sum item but it’s nothing “duc beet”.

Anyway, they served us honey, sesame seeds and shredded coconut on the side.

It is up to us to dress it as some like it sweet and others don’t.

Arkensen just ate it plain whereas Suanne loves lots of honey on it. 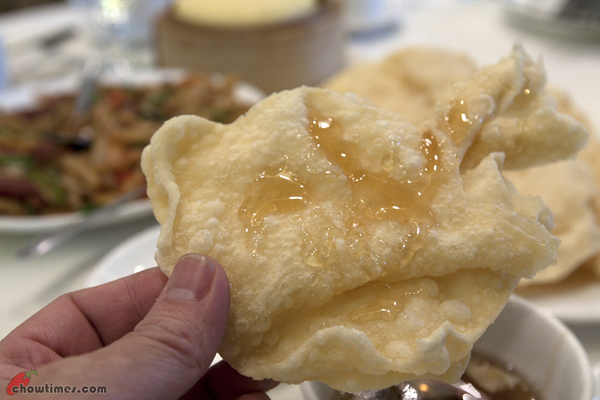 I don’t really fancy this because I find it dry.

Oh, we also had the best Steamed Bun with Egg Yolk & Custard we ever had. It was $4.35 for 3. The server told us that we must eat this when it’s warm. The filling was very oozy and the egg yolk has a sandy texture to it. 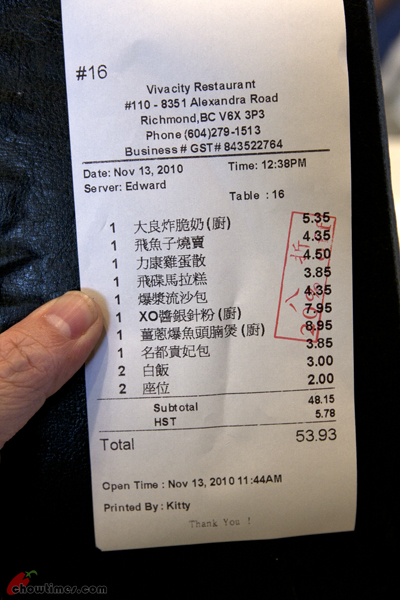 It was not too expensive but definitely a place we like. We like the chatty service from the captains. We like the bustle in the restaurant. Some people likes a quiet morning over a little food but I just love busy, noisy places for a weekend morning.

The food is not too bad too. So if you have no plans for breakfast on the weekend, you might want to consider checking this place out. Oh … ask for the XO Sauce if they don’t give that to you.