Did some of you notice that chowtimes.com went off line earlier on today? It was 6 hours long starting from 11PM yesterday. Good thing it happened during those hours when most of you are already fast asleep.

The outage was apparently widespread and impact all virtual dedicated servers hosted in GoDaddy. I was told that the root cause was with their network. For a while I was quite concerned that with the sudden increase of traffic the past few weeks (after chowtimes was mentioned on The Vancouver Sun), it is deja vu all over again.

Anyway we are back in business. 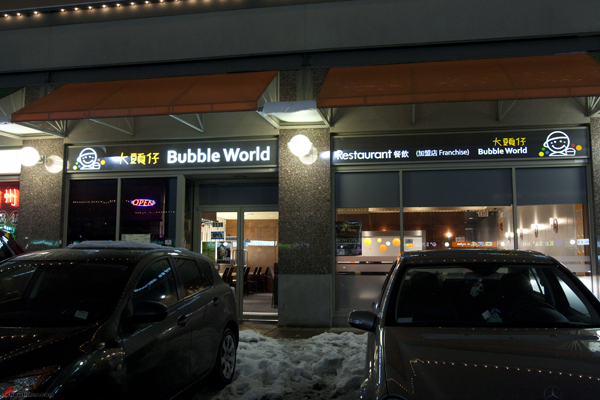 Suanne, Nanzaro and I went out looking for dinner that day about three weeks ago. Arkensen said he did not want to go out insisting he is not hungry and had made instant noodles just an hour earlier. He is smart and I think he planned it that way to avoid going out. He had planned with his friends to play Call of Duty: Black Ops. Have you guys seen that game? It has great graphics.

I can’t play those games anymore. These games belong to the younger generation. For my generation, we only have ONE joystick. I know how to move forward and backward and I know how to look left and right. That’s it. With today’s games, you have TWO joysticks and countless buttons. Not only can you move in all four directions with the new controllers, you can look up, down and every direction. So I tried to play these games with my boys. I get killed within seconds … all the time. Even before I can orientate myself, my boys would shout “Head shot!” and laugh out loud. Yeah, they can aim and shoot in a split second right in the middle of their dad’s temple. I give up! I’ll stick to Solitaire on Windows.

So we drove and was planning to go to a small Malaysian restaurant in Union Square. Strange … they were closed when in fact the sign on the door says that they should be opened. I think they decided to close shop that day because of the snow fall. So we walked around Union Square and decided to go to the Bubble World.

We had never noticed this Bubble World before. I think they are new. 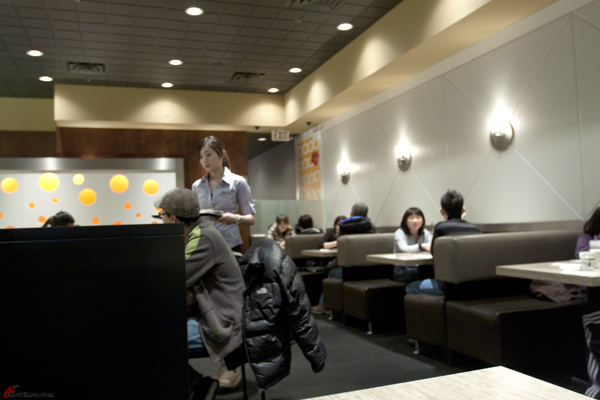 Bubble World … it is a franchise. You get quite a number of them scattered around Metro Vancouver. When they got started, they are more well known for their Bubble Tea outlets. However, this one is different. This one feels more like a restaurant than a bubble tea joint.

The restaurant does look … dim in that there is not sufficient lightings and not that it is supposed to be deliberately dim for that cozy atmosphere. It just felt like they don’t have enough bulbs or something like that.

Most of the people who worked there are young people and does not seems very highly trained if you know what I mean. So don’t expect great service. I am not saying that the service is poor. It is not. It is just that they will come by take your order and deliver your food.

The above is their take out menu which you can click on to enlarge it.

The prices in Bubble World are very much inline with other restaurants. Many of the dishes are in the $6-$7 region which is a range that I consider is good already. The menu is dominated with food items rather than drinks.

We are here anyway for food. We did not order any of the bubble tea drinks, neither did Nanzaro. He is not into bubble tea (because he said it is “too Asian”). He is a Coke guy.

Personally, Suanne and I don’t like Bubble Tea too. I mean it is nice once in a while but we can’t see ourselves going out just for bubble tea. We find that Bubble Tea are just over priced sugarly drinks. 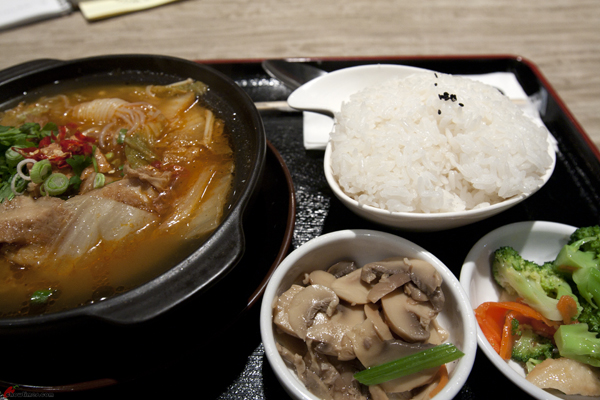 So it was just food we got. Suanne had the Spicy Hot Pot (Tofu, beef tripe, veggie) which is listed under the Chef’s Special section of the menu. It is quite a deal. All the above is just $7.

This is one of the very few items on their menu that is the most spiciest. This one has “three chilis” … 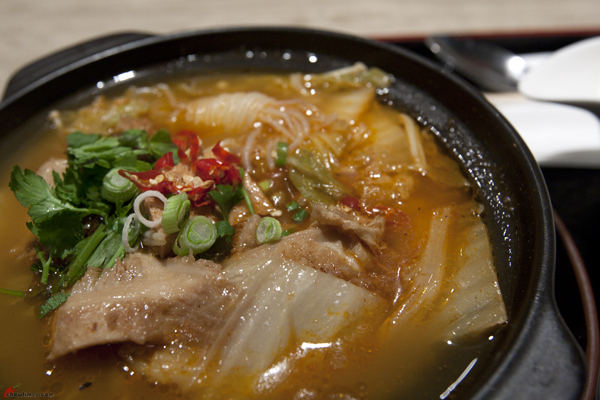 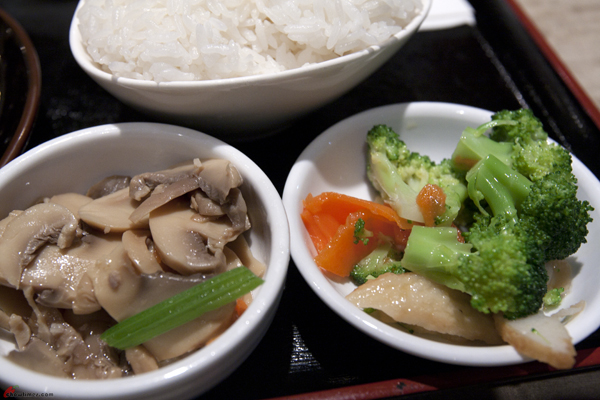 Their combo meals came with rice and two sides. The two side Suanne had was mushrooms and brocolli. The sides were nothing great as you can expect but it is just nice to have sides. It makes it feel more like a deal. 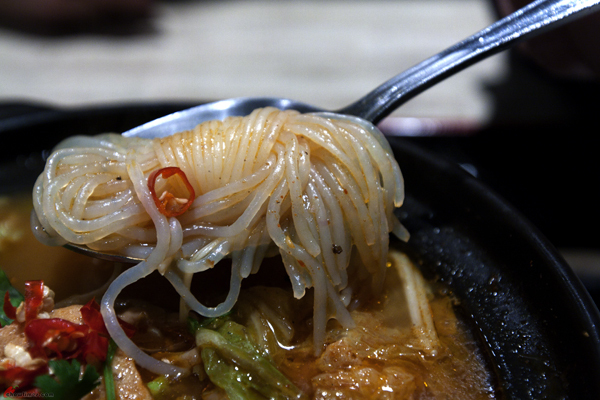 The noodles are one of those taro noodles bundle. These kind of noodles are “white shirt” friendly. I am one of those people who gets soup splatter on my shirt every time I eat  soup noodles. And I hate getting my shirts washed because machine washing always stretches the shirts and loses its shape. Yeah, I wear my shirt until it smells. So sometime you could see food stains on my shirt and you will know I had soup noodles. 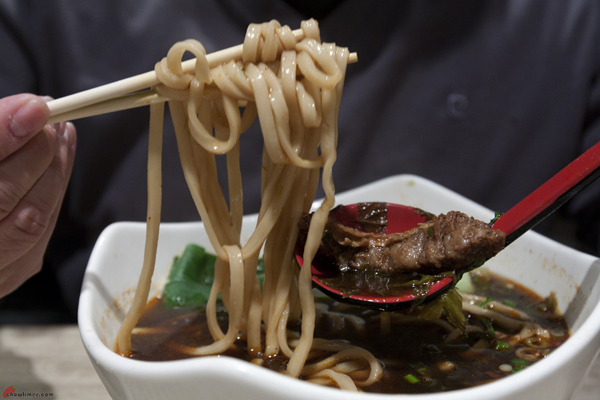 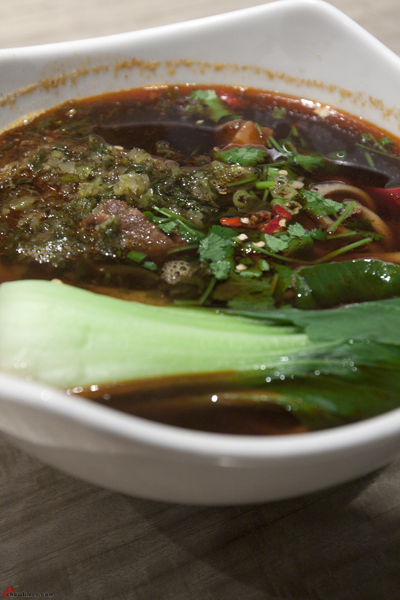 But I like Taiwanese Beef Noodles and that was what I got. This is $8.

The serving is big and has sour mustard and bok choy. The noodles was spicy enough to keep me happy but frankly I had much better ones in a lot of places. I did not quite like the strong herbalish taste of their soup.

Out of curiosity … what is the national dish of Taiwan? Is it the Taiwanese Beef Noodles? I would think it is because this is so uniquely Taiwan.

Or maybe the national dish of Taiwan is Stinky Tofu?!? 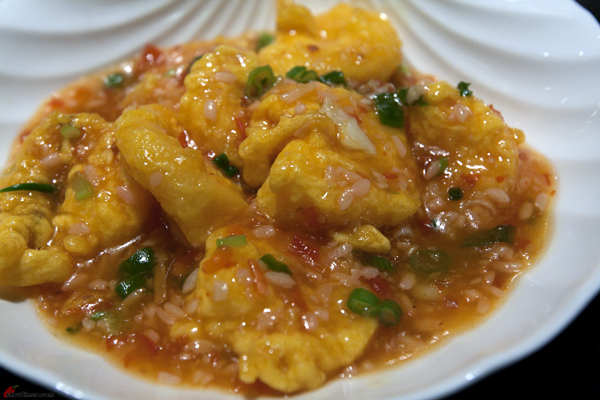 Nanzaro’s selection was a beauty. He is getting “it” … like his dada. 🙂

He had the Stir Fry Shrimp Balls with Spicy Sauce ($8). Like Suanne’s combo, this dish also came with rice and two identical sides.

It is not a big plate. The shrimp was coasted with eggs which is the kind of food up my alley. According to Nanzaro he said that the shrimp tastes nutty. Huh? Nutty? We asked him why and he said it just is. 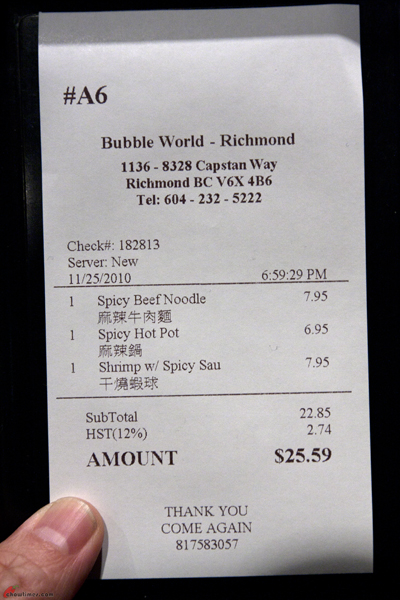 Not bad. The dinner for the three of us was just $26 before tips.

However, the food is best described as so-so only. It is nothing great and neither is it bad.

At these prices, it is not surprising that it is cash only. So many restaurants these days are cash only and I felt that people (particularly in Asian restaurants) had accepted this inconvenience. Yeah … some people say that these “cash only” practices allows restaurants to be creative with their tax returns but yet on the flip side, given the kind of prices these restaurant charges, cutting expense by not footing the credit card charges does make a difference between profit and loss. You gotta remember that Bubble World is a franchise too.

Just yesterday when I was driving home I heard on the radio that someone was claiming that by the end of winter, 1 out of 5 restaurants in Metro Vancouver will be forced to close because of the perfect storm of HST, drinking laws and the possibility of a hike in minimum wage. When I heard it, I fear that this could very well come true. Any thoughts on this?

The Diplomat Bakery in Steveston